The Shirt Off His Back

Once a week (when he’s not out of the country conducting military war games), my father volunteers as an Airport Ambassador at the San Diego airport. He loves everything about travel, and is even nosier than I am, so he gets a kick out of not only being in an airport, but also in a position to ask people where they’re coming from, where they’re going, and how he can help. 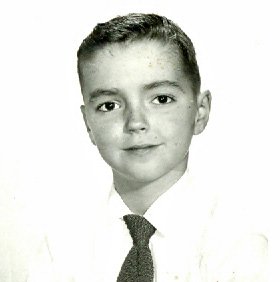 Don’t let the clean look fool you, it wouldn’t be long before this little boy was on his first Harley and hanging with the Hell’s Angels. But despite Dad’s questionable associations (myself included) and his disinterest in being seen as a “goody goody,” he has always managed to remain on the up and up.

I talk to my dad at least once, sometimes as many as five times a day. The last time we spoke (yesterday) I asked him if anything interesting or unusual had happened while he was volunteering at the airport the night before.

“Well, I did literally give a guy the shirt off my back,” Dad said.

“What? How does that happen?” My OCD is a tiny shadow of my father’s towering fastidiousness. Dad is particular about his personal things, and few items are more personal than clothing. The idea of him removing an article of his clothing and giving it away was difficult for me to fathom.

Dad began to paint the picture. It was 10 p.m., and the two women who sit at the information desk (Dad prefers to roam), beckoned my father over to them. “They were like, ‘Hey, CC! Where can I get a white t-shirt right now?’ So I said, probably Walmart, or 7-11 might sell packs of white t-shirts.”

Dad described the young man who was standing in front of the desk, with a duffle back on his back and two huge black bags, one in each hand. With a hint of admiration, Dad told me the guy refused to take a free cart, saying the weight of the three bags “balanced him out.”

Dad asked the guy why he needed a white t-shirt at 10 p.m. Of course, it wasn’t enough for Dad to simply give an answer, he had to know why the question was being asked. I’m the same way. I’d like to say this is merely because understanding someone’s need will better help me fill it, but we all know it’s really because I’m inquisitive, by both nature and nurture.

“He’d just arrived to San Diego and had to check in to command at 32nd street, and the military is very strict on, when you’re doing official business, you have to be in the uniform of the day, and his was a white t-shirt that you can see, and the rest of his uniform,” Dad explained.

Ah, Navy man, I thought. This was starting to make more sense. Dad’s a retired Navy man himself.

“He’d forgotten to pack one,” Dad continued. “I said, take mine, I don’t care, I have a thousand of them. I told him to put it on backwards, because mine was a v-neck, but if he put it on backwards it would look right.” Dad went to the bathroom (“I didn’t want to make anybody puke by taking my shirt off right there”), removed the t-shirt that was underneath his button-down, and handed it over to the guy.

“He tried to give me a few bucks, but I told him it was no big deal,” Dad said. “He was incredibly appreciative.”

“Don’t go making a thing of this,” Dad warned. But it was too late. I was already typing. 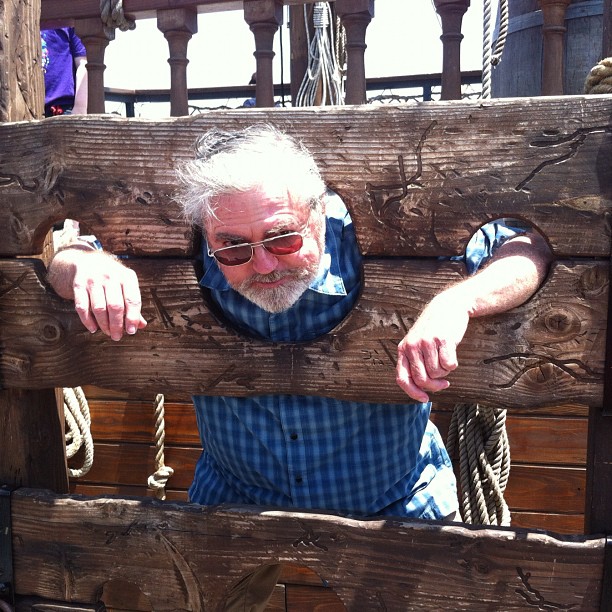 Dad, hanging out with me on a pirate ship