Tales from the Vineyard Part 1: The Film Premiere

This story begins long before we arrived on the island of Martha’s Vineyard for the world premiere of our latest film, a documentary about artist Heather Neill. Here’s the short version: Ten years ago, for my 30th birthday (that’s right, I will soon be 40), David surprised me with a painting I’d been coveting, one that was out of my price range. It was by an artist we’d never met who was, like David, represented by the Granary Gallery (which is how I came to see the painting in the first place). I had only just begun what has since blossomed into a modest collection of word-related art. This piece, for so many reasons, didn’t just speak to me: it sang.

A woodworker by trade before she turned all her attention to painting, the artist had also constructed the frame, and carved within it a quote by T.S. Eliot that wound its way around the warm scene that made the core of this writer tingle:

Time for you and time for me,
And time yet for a hundred indecisions,
And for a hundred visions and revisions,
Before the taking of a toast and tea.

Now fast-forward… David and I finally met Heather Neill around five years ago, when the Granary aligned her show openings with David’s. Every summer for the past handful of years, they shared their exhibition party (the Granary, a Martha’s Vineyard institution, only holds exhibition events during the summer, when the population on the island swells). I continued to be taken by Heather’s work. The warmth each painting seemed to emanate, the insane amount of detail… I wanted to know more about it. Not how she created them, not exactly — I’m not a painter, it’s not like I was looking for tips. I wanted to know why. Why so many teacups? Why all those antiquated phones, tools, and clothing? What did those rooms she depicted mean to her? She was clearly prolific. Why was she so compelled to create these scenes? 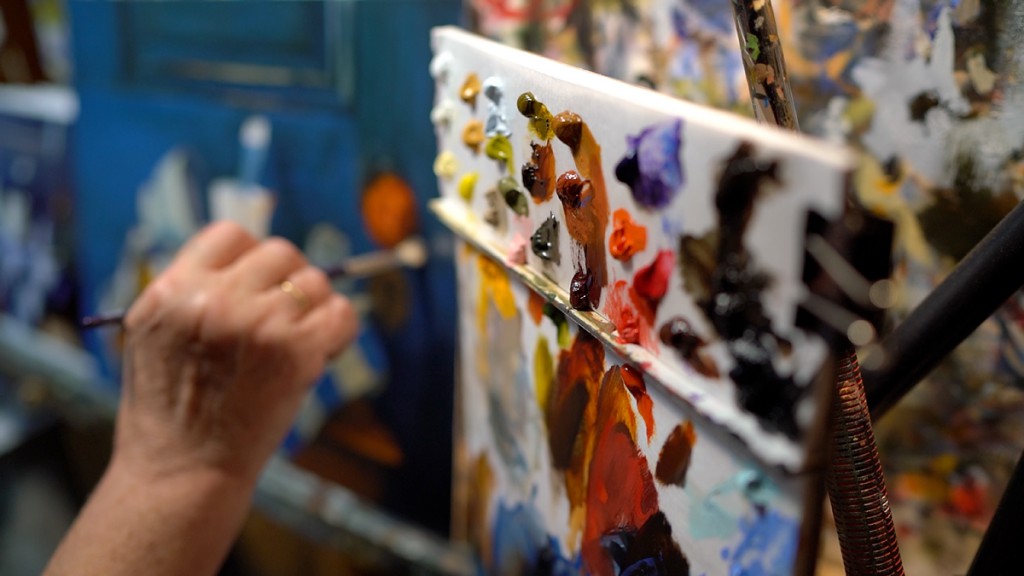 Fortunately, David and I were in a position to find out. As executive producers of The Artist Odyssey, we were looking for a new artist subject, and our minds simultaneously turned to Heather Neill. We’d never had the opportunity to hang out with her outside of the gallery galas, but from our short talks here and there, it was clear that the four of us (me, David, Heather and Pat, her spouse) shared mutual admiration. We made the arrangements, and filmed on the island last summer, and then in September, when we visited the artist’s home and studio in rural Pennsylvania. As we expected, we all hit it off, and a lifetime friendship was forged.

Just before arriving on the island in July, I was contacted by a writer for the Vineyard Gazette, which resulted in this story. The online version is colorful, so I recommend the click, but here’s a shot of the actual newsprint version: 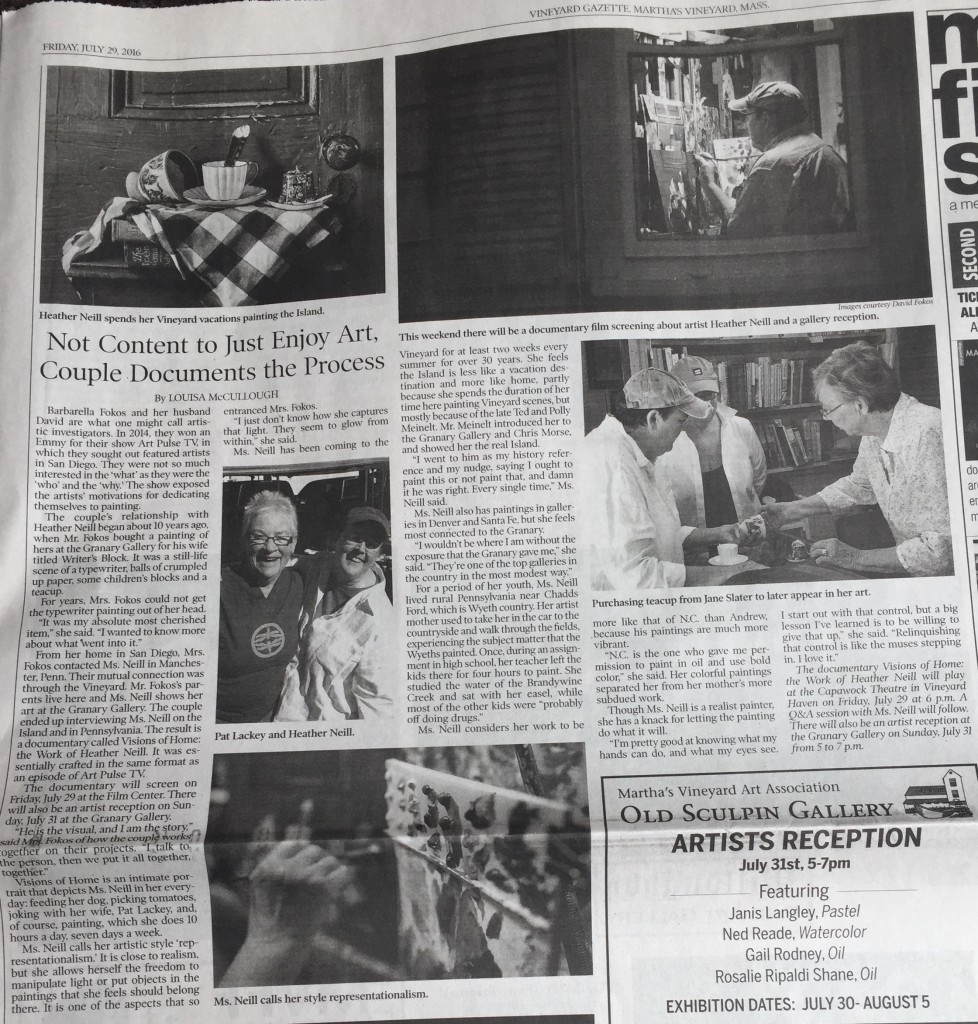 A story about us and our film in the Vineyard Gazette

With the help of the Granary, we were able to secure the recently renovated Capawock Theatre in Vineyard Haven as the location for our World Premiere of the film. The night of the show, the theater — which seats almost 200 — was packed. 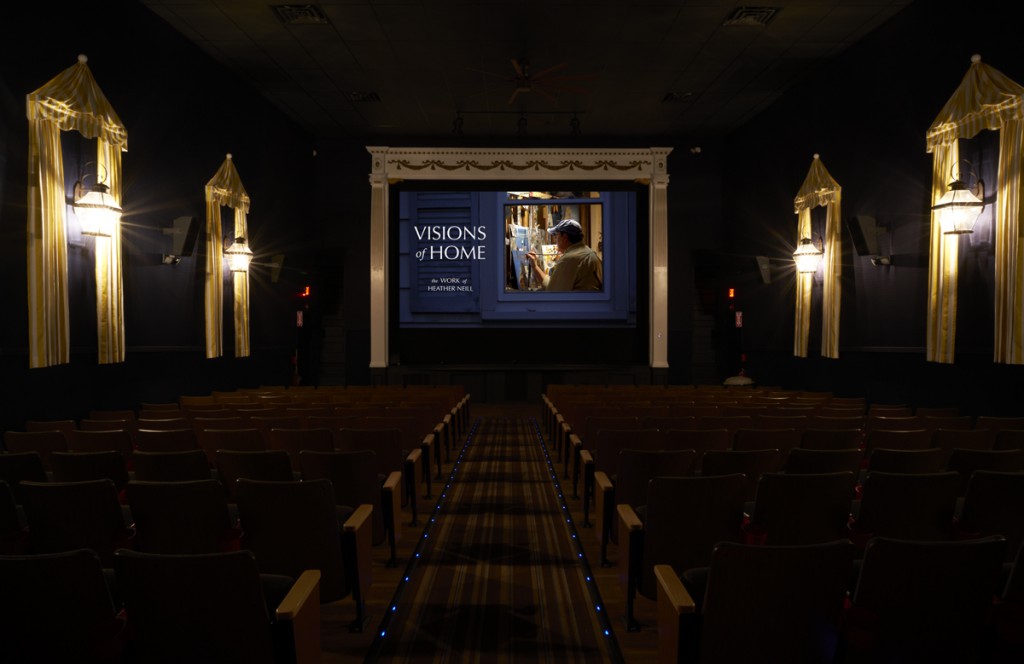 Inside the Capawock before the show

Of course, the pathologically punctual neurotic in me was delighted at how early everyone showed to get their seats. This shot was taken 15 minutes before the show was scheduled to begin. 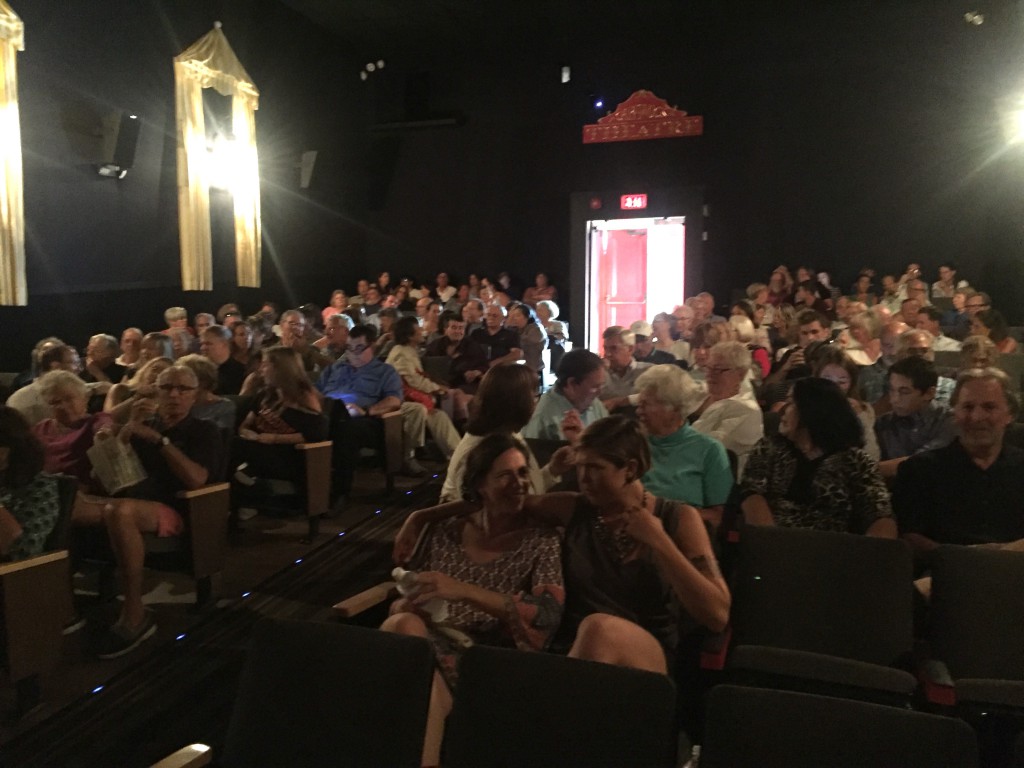 The theater filling up!

I don’t know how to express in words the emotions I felt when the credits appeared and a theater full of people burst into applause that lasted the duration of the credits. Relief? Humility? A strange mixture of embarrassment and pride? When the lights came on, the artist herself stood up in the aisle, and did the “I’m not worthy” bow. But we all knew better. She joined us at the front for a brief Q&A, and then we all went to dinner to bask in the glow of a successful evening. Fun side note: Heather had NOT seen the film prior to that night. We’d kept it from her, and she demonstrated enormous trust by not pestering us to see it. This was a film about her and her work, so her response was all that mattered, and most of my nervousness before the show had to do with whether or not the artist would approve of how we’d portrayed her. And she was happy. Pat, who is the least guarded person I’ve ever met, reportedly cried several times, in a good way. 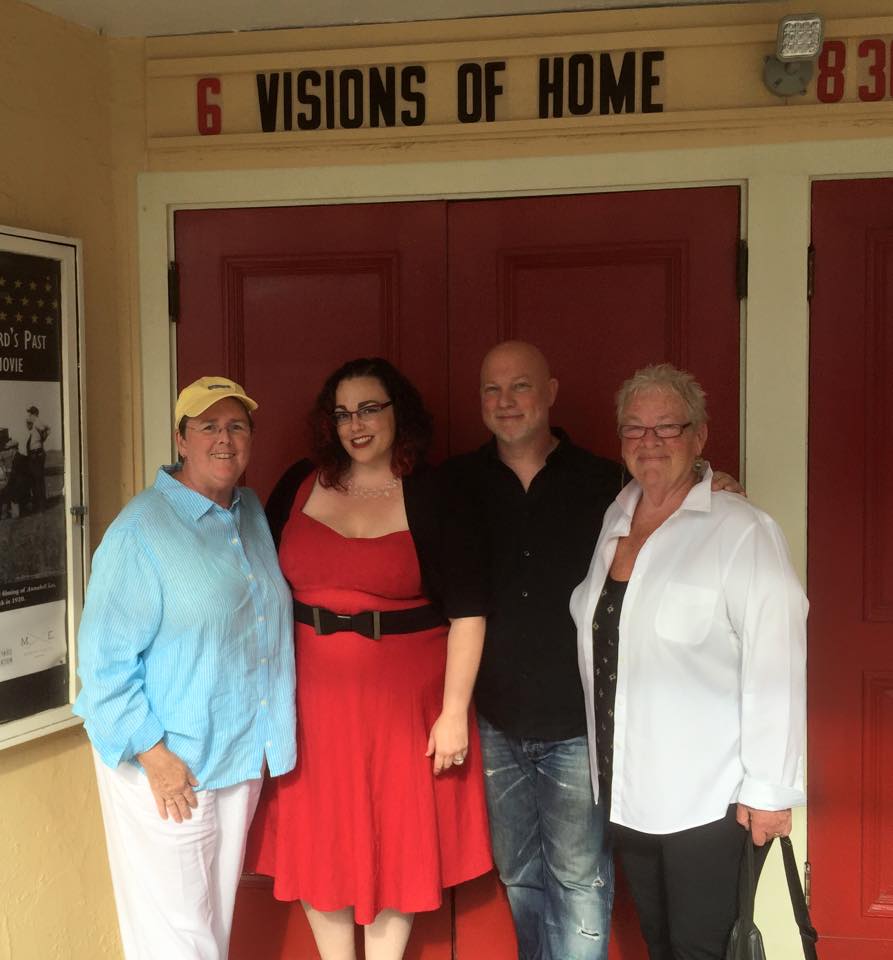 Heather and Pat flanking me and David beneath the marquee

Before we were seated at our table for dinner, Heather BLEW US AWAY by surprising us with a painting she had made, about us and for us. It’s called Hokos Fokos. At first I didn’t realize she’d made it specifically for us. I saw the shoe, and the camera, then the red lipstick, my signature. But the full realization didn’t settle in until Heather pointed to one detail, said, “That’s a raccoon paw,” to which I responded, “I LOVE raccoons,” and she looked at me, bemused, and said, “I know.” At that point, I dissolved into tears of appreciation. 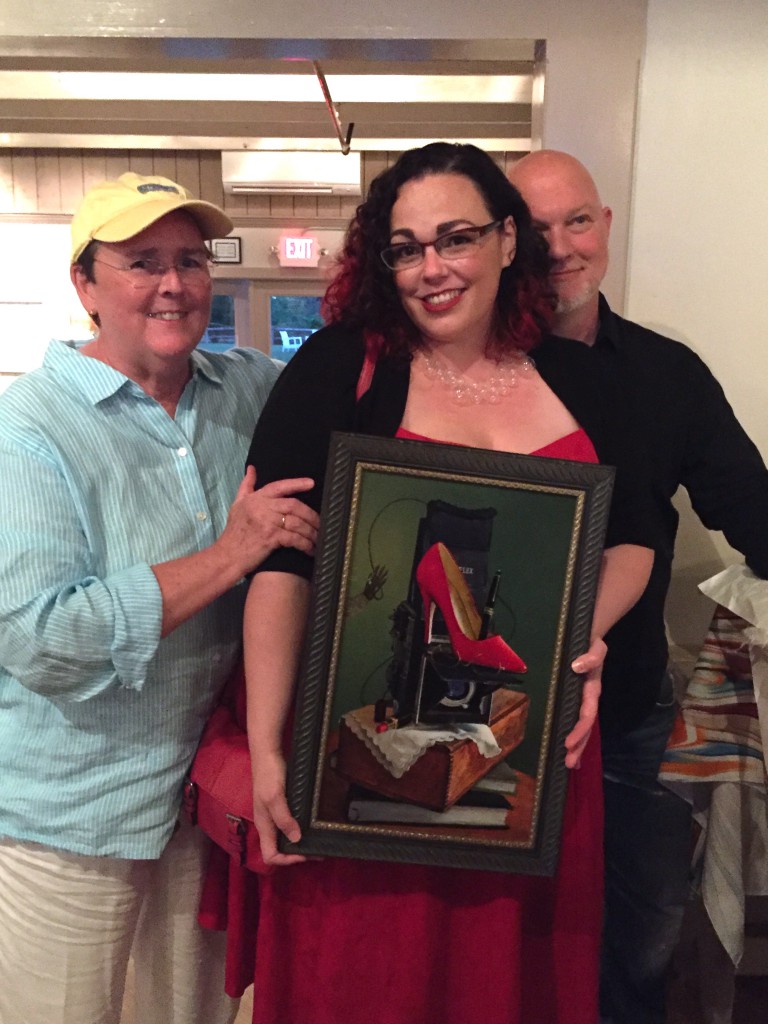 Stay tuned for Part 2, about Heather and David’s shared Exhibition at the Granary, idyllic views of the island, and more!

In the meantime, if you haven’t viewed it already, you can watch the film in its entirety RIGHT HERE, RIGHT NOW.

One Response to Tales from the Vineyard Part 1: The Film Premiere