Beginning February 9, the project that was eight years and around a million dollars in the making is open to the public. At the ceremonial ribbon cutting this morning, San Diego Museum of Art Executive Director Roxana Velásquez shared the scissors with designers from Staples of Charles and Curator of Asian Art Sonya Rhie Quintanilla. 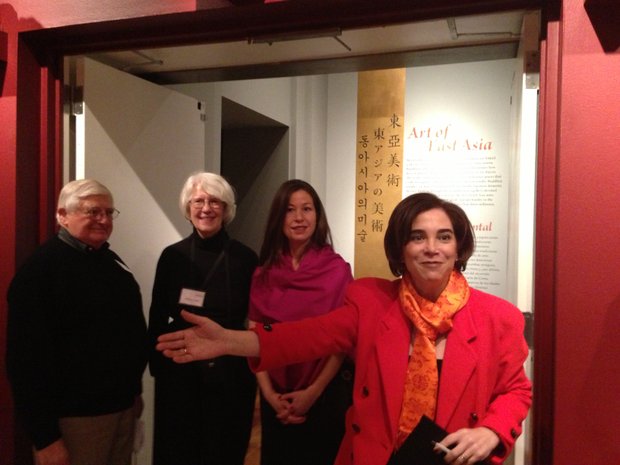 After the ribbon was cut (by the biggest pair of working scissors I’ve ever seen) the curator and designers gave a guided tour of the exhibit, which is broken into five sections: Tombs, Buddhist Temples, Art of Korea, Hall of Harmony, and House and Shrine. Quintanilla described how space design and wall coloring helps create a sense that one is moving from “mood to mood.” For example, the first area is dark and “tomb-like,” which reflects Confucianism “filial piety.” All of the items in the Tomb room represent an effort to ensure that ancestors are comfortable in the afterlife. 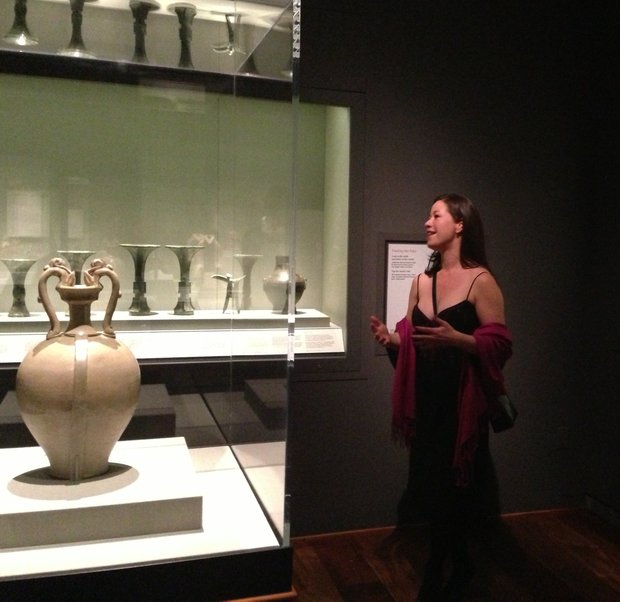 Quintanilla describes the Tombs section of the exhibit

Throughout the exhibit are Asian art forgeries, some of which for many years were considered to be authentic. These “allow visitors to touch works similar to those on view and providing a unique opportunity to get a tactile understanding of objects normally kept under glass.” 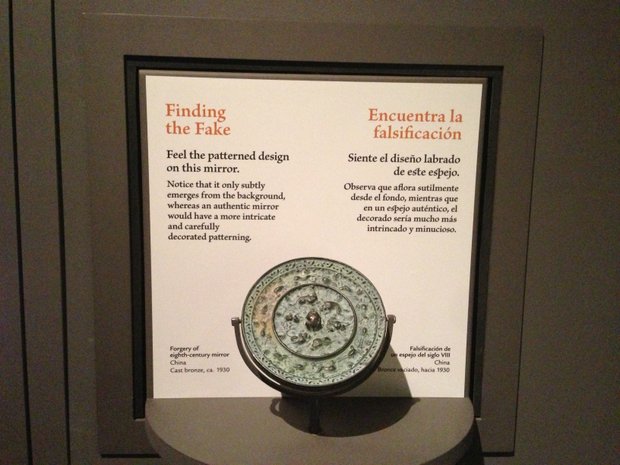 Touchable forgery of an artifact

The next space offered a contrasting mood, which Quintanilla described as “more exuberant.” We went from dark bluish-gray walls to a rich orange. Contrasting with the focus on ancestors in the past, this Buddhist room conveys a community of people who thought of the future, and prayed publicly for children and prosperity. Most of the artifacts in this area feature icons that were the recipients of worship. 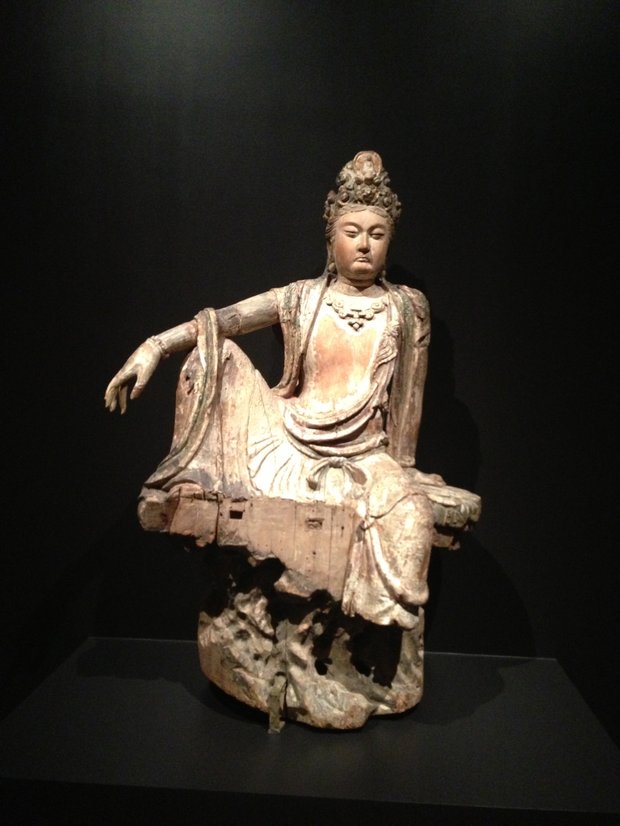 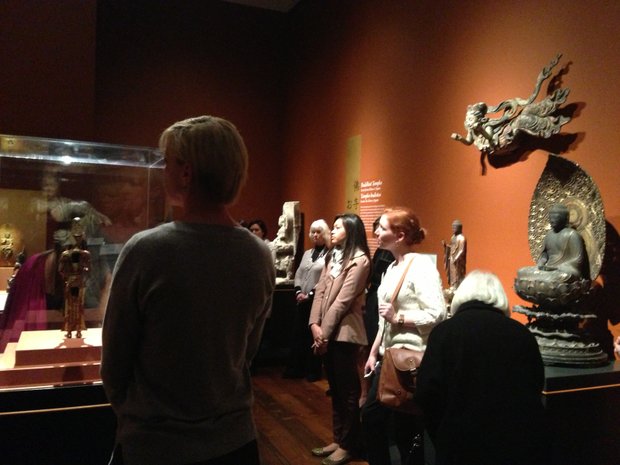 Audience at the Ribbon Cutting Ceremony and Tour 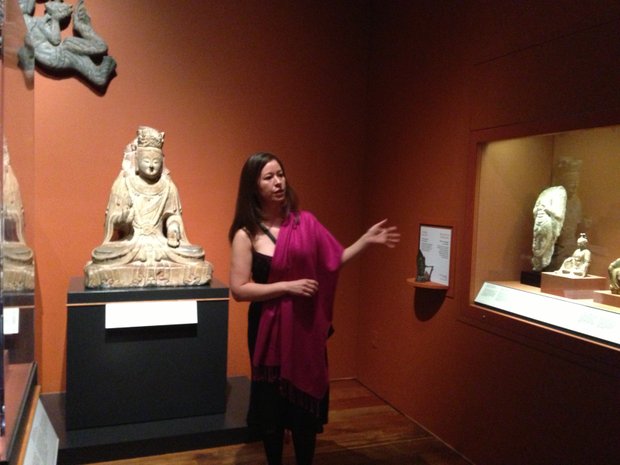 Quintanilla in the “exuberant” Buddhist room

The Art of Korea is located in a narrow, light-bluish green hallway. The museum has “never before had the chance to feature Korean art in its own section.” Some of the celadon (jade-green ceramics) has been in the museum’s collection since 1928. 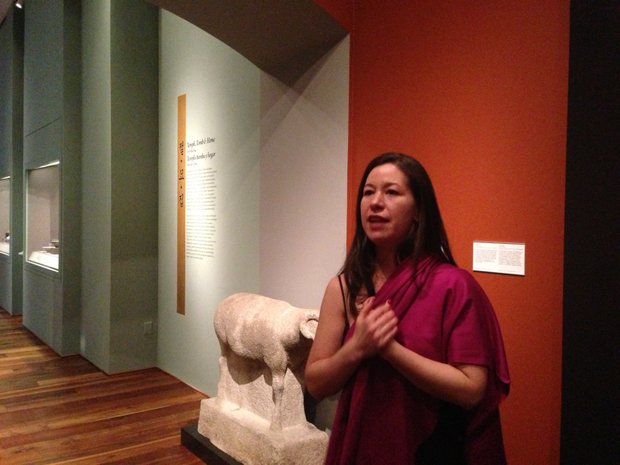 Quintanilla at the entrance to the Hall of Korean Art 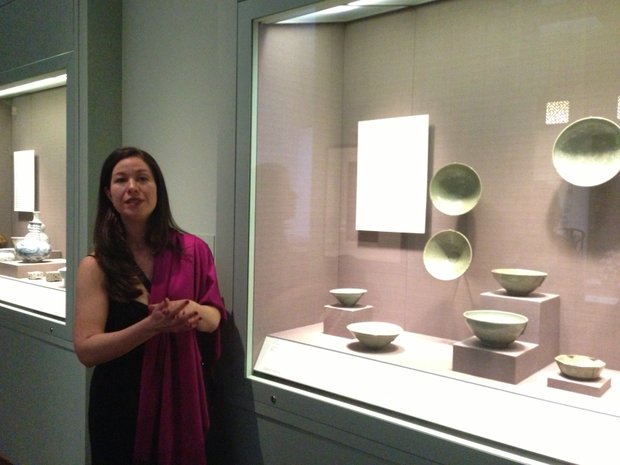 The last two areas were my personal favorite — both were welcoming, wide open spaces. The first was the Hall of Harmony: Daoist Visions in Later China. “We wanted people to have the feeling of entering a public reception hall,” Quintanilla said. “The theme of Daoism is extreme longevity.” The second was based on Japanese Shintoism, featuring shrines and reflecting the Japanese reverence for nature.

My eyes were drawn to the corners, where benches were arranged on either side of display cases. Because the the museum hopes people will relax and spend time in the space, they designed an innovative way to incorporate seating with viewing. “There is no model for this,” Quintanilla explained. The thought was, “people love to sit in Asian galleries” so the task became figuring out how to integrate into the seating area cases with little objects that might otherwise be overlooked. 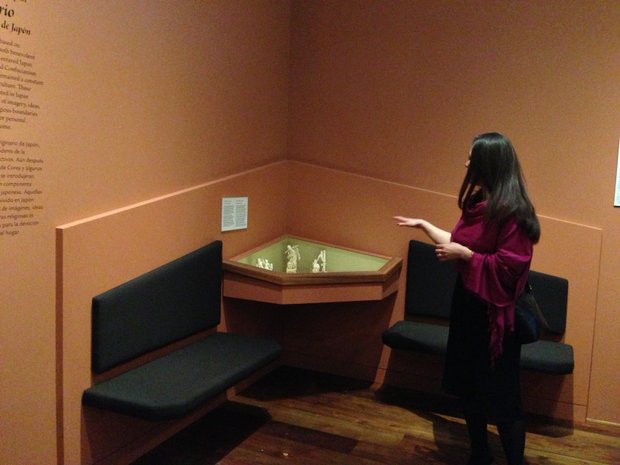 Another inventive aspect to the exhibit was the method used to anchor the 280 objects on display (around 100 of which have never been on view). Every item is “seismically secured” and “mechanically attached.” I never would have seen them had they not been called to my attention. “They are almost like sculptures unto themselves,” a woman next to me said, and I agreed. 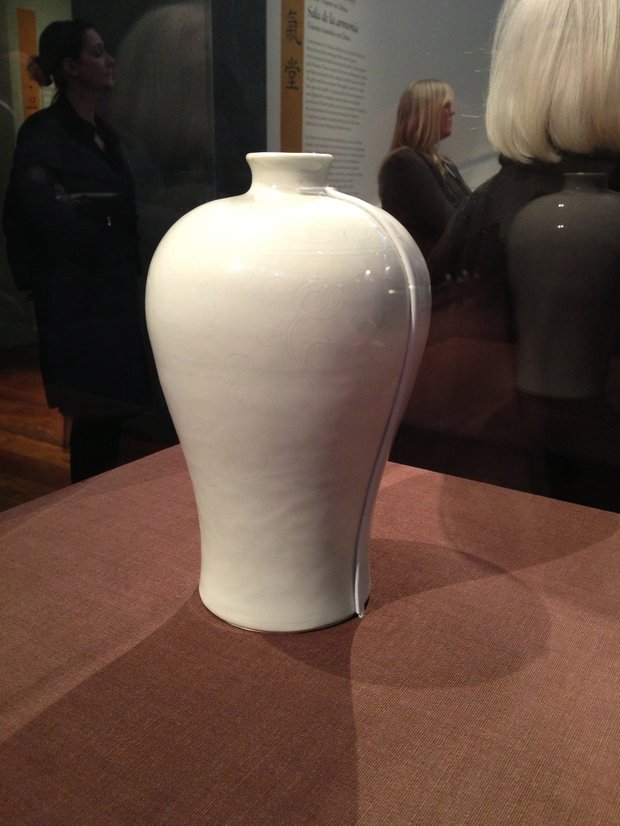 Mechanical mount, sloping alongside this vase 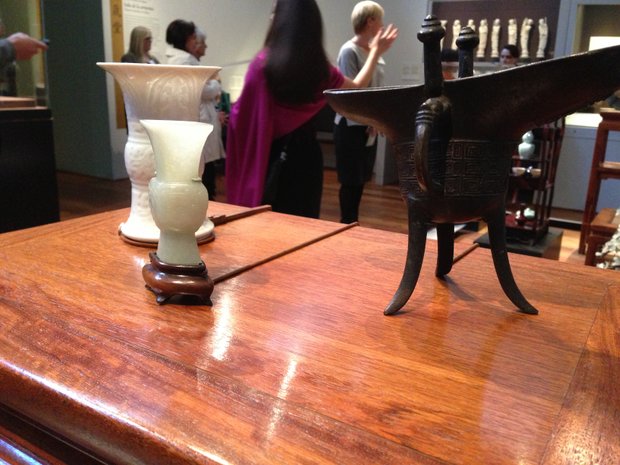 The designers’ goal was to create a space where “it is a pleasure to come in and stay, not only to learn, but to enjoy what Asia has to offer.”