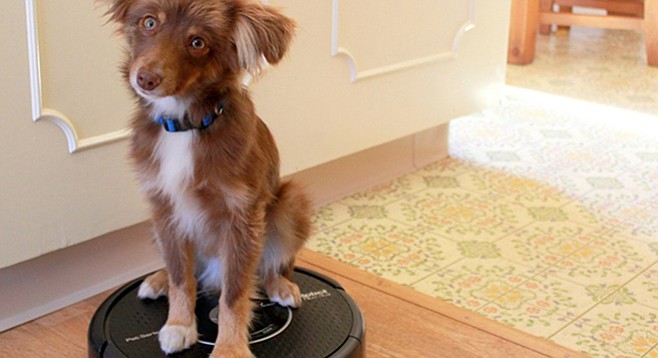 We have a new addition to our household. Before you get too excited, it’s not a dog. Regardless of how badly I may want a fluffy friend, David has convinced me, successfully for now, that caring for a pet is not feasible with our current lifestyle (the travel, the unpredictability of our day-to-day, etc.). For now, I’ll continue to get my fur fix from the dogs in my neighborhood, while here at home I content myself with a small assortment of a different kind of “pet,” each of the electronic persuasion.

Siri was the first to join our little family, and there are two of them. We didn’t seek them out — they came with our phones. My Siri is male, because I prefer to have men do my bidding, and David’s is the standard female, because that was the default mode and he didn’t want to bother with options. Over time, we’ve come to rely on him/her to help make appointments, check email, launch apps, look things up online, take notes, make lists, and even get us where we need to go by dictating directions to us in the car. Next came Alexa. The Amazon Echo device needs to be plugged in, so Alexa lives in a corner of the kitchen. She reads the news to us in the morning while we eat breakfast, reports the weather, and plays music. We keep our requests simple: no lists or ordering things from Amazon or conducting web searches, because Alexa too frequently misunderstands us, or as David says, “She’s too stupid for all that.”

David rarely uses Siri — he prefers to tippety-tap out his texts and commands. And he has a weird grudge against Alexa, because more often than not she either misunderstands or straight up ignores him. This little scene has played out multiple times: David makes two or three attempts to extract information or execute a command, and then, failing, he throws his arms in the air; I repeat his request to prove the thing works, and then David walks away in a huff, muttering his favorite phrase to express his disappointment at any given technology, “I thought this was supposed to be the future.”

Our latest addition is a Roomba, and it is, by far, David’s favorite of our electronic bunch. During Thanksgiving dinner at my mother’s house — when the family goes around the table and shares what we’re thankful for — the Roomba made it into David’s heartfelt speech. He says he was joking, but I’m not so sure.

One man’s affinity for a plastic and metal vacuum-bot may seem silly to those who live with warm creatures made of flesh and fur, such as kids and/or pets, but it makes perfect sense when you consider just how important a clean, dust-free space is to David’s mental well-being.

Plenty of people throw around the word “perfectionist,” mostly as a badge of honor. Sure, most of us prefer it when things work well and turn out nice, but most of us accept a certain level of quality as “good enough.” David, on the other hand, considers accepting anything but the best to be settling for half-assed. It wasn’t until I began living with him that I realized the plight of the perfectionist, or the extent to which a stickler suffers. On the handful of occasions I used the term “good enough” in his presence, he reacted as though I’d punched him in the face. He is a photographic artist who releases four new images a year; he is a husband who grumbles if I place an item on what was a previously clear surface; he is a man who has won every contest he’s ever entered. Perfection — the seeking of it, the creation of it — is as much a part of David as his dimples.

Our new apartment has a dark brown concrete floor that was practically designed to showcase dust. Like Mo, the obsessive, dirt-cleaning robot in the movie Wall-E, the mess was making David lose his mind. For many months, he struggled to figure out a way to stay ahead of the dirt while simultaneously trying to deny its presence. While researching options, he insisted we keep the blinds closed, as the extra light called more attention to the issue.

Then one day, he arrived home with a giant box in his arms and a huge smile on his face. The Roomba looks like a very low-flying saucer that stumbles around and bumps into things, collecting crumbs and dust from the floor like a drunk bum picking up loose change. When he first turned it on, David followed the thing around, chastising it for any spot that it missed. “If you think you’re done, Buster, think again,” he said to the machine as if it could understand him. “I’m just going to keep running you until that floor is clean.” To me, he added, “I’m not letting it get off that easily.”

“And this is why you suck as a boss,” I said with a smirk. “How can you expect it to concentrate if you’re just looking over its shoulder the whole time, glaring down at it and shaking your head in disapproval?”

“I don’t expect anything of anyone that I wouldn’t expect of myself,” David said.

Though I teased him, I was relieved to see David smile at the floor for the first time since we moved here. I hadn’t realized how much the dirt had been bringing him down until suddenly it wasn’t anymore. I love to see his face light up the special way it does when something works the way it’s intended to.

We were out one night when David pulled out his phone and held it up. On the screen was a large, green circle with the word, “Clean,” written inside. He pressed it with a flourish and said, “When we get home, the floor will be clean.” It occurred to me that if we’re ever going to get a pet, I’ll have to first convince David that it can clean up after itself.