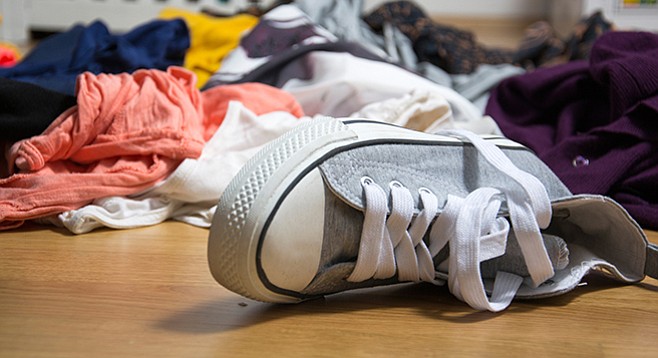 It was a few weeks ago that my sister Jane started talking weird. Her new way of speaking revolved around a strange new word. In emails she spelled it, “KonMari.” This word (almost always followed by some mention of “joy”) began replacing regular nouns and verbs. Once, Jane answered her phone only to tell me she couldn’t talk because she was in the midst of “KonMari-ing.” On another occasion, when I asked her what she was up to, Jane responded, “Jenny’s coming over to look at my KonMari, to see if there’s anything she wants.”

“Because,” Jane declared, in what, for her, was a rare tone of authority, “It’s not just clothes. It’s KonMari. It’s the things that no longer bring me joy.”

The Life-Changing Magic
of Tidying Up

By this point, I’d done some googling, so I knew that KonMari wasn’t a thing so much as a “method” for cleaning, named for the woman behind the method, Marie Kondo. Jane’s new way of speaking came from Kondo’s book, The Life-Changing Magic of Tidying Up: the Japanese Art of De-cluttering and Organizing.

Organizing has been a struggle for my fashion-obsessed sister for as long as I can remember. Once, she talked me into helping her make a video to send to Oprah, in which Jane used her messy garage and adorable daughter to appeal to the media magnate’s sympathies. She thought if Oprah could only see her plight, that the Champion of Women herself would promptly send a famous professional organizer to Jane’s house, along with a film crew to document the transformation.

Now, years later, after hearing a woman on the radio talk about how much better her life became after she followed Kondo’s advice, Jane had to try it for herself.

“I can’t even get dressed in the morning because I have too many things falling out of my closet,” she complained. “I thought, If I could just organize my stuff somehow, maybe my days wouldn’t be as complicated.” Paraphrasing her new mantra, Jane said, “The less you have, the easier it is to get dressed and ready. You only keep things you actually like, or as KonMari says, things that bring you joy.”

Apparently, the method involves talking to inanimate objects. According to an excerpt I read when flipping through the book, when Madame KonMari gets home, she says to her shoes, “Thank you very much for your hard work.” Jane explained that when deciding what to keep and what to chuck, “You have to touch everything and ask yourself, ‘Does this bring me joy?’ And if it doesn’t, you say, ‘Thank you for your service,’ and throw it away.”

“That’s just…ridiculous,” I said. “Why do you have to thank it?”

“You have to say goodbye to it because you’re acknowledging that it had its purpose, even if its purpose is to tell you this is something you should never wear,” Jane said. “Did I touch everything? No. But I did have to ask that question of each item — whether or not it brings me joy.”

My sister Jenny told a slightly different story. She’d stopped by Jane’s one day after work to sift through the throwaways. Among Jane’s joyless items was a button-down blouse Jenny thought would be perfect for the office. While getting dressed the next morning, Jenny donned the shirt and was about to head out the door when she noticed a big stain on the front. “It wasn’t like Jane was going through her closet and saying, ‘I don’t wear this very often and it doesn’t give me pleasure, so I’m going to let it go,’” Jenny said. “It was more like, ‘I have no choice but to let it go because it’s stained or faded.’ To be fair, I did get a comfy sweatshirt, but I’ll probably only wear it around the house.”

While we were on the subject, I asked Jenny, “What’s with the whole ‘joy’ thing? I mean, I have stuff in my house that doesn’t bring me joy, so much as it’s practical. You know, like toilet-bowl cleaners.”

“But doesn’t it bring you joy to have a clean toilet?”

“Oh! I’ve got one,” Jenny said. “Toothpaste. It doesn’t bring me joy, but if I don’t use it, I’d get cavities. Wait, maybe that does bring me joy.” We silently pondered this for a moment and then Jenny decided, “No, it doesn’t. I derive no joy from toothpaste. It’s just a necessity to go on keeping my teeth.”

I recognize that it’s an absurd problem to have, this issue of clutter, of having so much more than we need, that our things begin to disrupt our life. To have so many things, we require methods and illustrated guides to help us cope with it all. I wondered what it would be like to try to explain this terrible plight of clutter to a little boy who only owns one pair of pants.

When Jane first told me about it, I had laughed off her book and the author’s need to “grant clothes the respect they deserve” by touching and thanking them. I’m the one who did the walking — why would I need to thank my shoes? But when I conjured that hypothetical child, I imagined him appreciating a new pair of pants in a way that I — as a Navy brat who deemed back-to-school shopping a laborious chore — could never have fathomed at his age. Maybe it wasn’t such a bad idea to stop and think about how lucky we are to have what we do, and be reminded that there are plenty of people out there who could use the things we don’t really need or want. Jane would be donating everything she’d “KonMari’d” to Goodwill.

“I feel like I have more room in my brain,” Jane said once her closet was set in order.

“That’s the last thing you need,” I quipped. “Freeing up your mind just leaves more space for useless junk.”