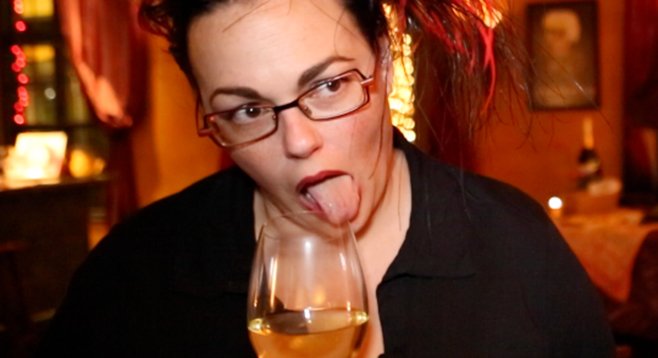 “Are you guys okay? You look a little, I don’t know…bewildered. Not to mention out of place,” I giggled, gesturing at their pressed slacks and white button-downs. “You’re not freaked out by these, are you?” I tipped my chin down, so as to draw their gaze to where my cups runnethed over, buttressed as they were by the sturdy leather corset that thrust my ample bosom up and out.

“No, no, it’s not that,” Remel insisted with a flustered tinge to his voice. “We’re fine with all this — it’s just not what we were expecting. When we talked on the phone, I thought you said ‘weather contest.’”

I laughed long and hard. After my chuckles began to taper off, I said, “What in the world? ‘Weather’? What kind of contest would that be?”

“I wasn’t sure, but I know that you know weather people on the news, so I thought it had to be like some kind of competition between who could report weather the best or something,” Remel said. “I even told Nick here that we were going to be filming a weather contest tonight.” Remel shot an amused, apologetic glance at his new assistant.

“Well, you guys certainly got more than you bargained for,” I said. “Enjoy it. Oh, and don’t be offended if you get lingering glances from some of the leather-clad men here tonight. On the contrary, take it as a compliment if they even notice you in those clothes.” The lights in the theater flickered on and off. “That’s my cue — gotta go,” I said, leaving David to fend for the small film crew.

While standing onstage waiting to begin, I lowered my chin a little and said, “I hope those boys aren’t traumatized by the end of this.” I made out David’s face, smiling and nodding in the dark distance, and added, “Just think of the stories they’ll have to tell their friends this weekend.”

“What did you say?” AJ, my co-emcee for the Mr. and Ms. San Diego Leather Contest, leaned in close to hear me better. “Oh, I wasn’t talking to you,” I said. “I’m communicating with my man through this little microphone in my cleavage. Everything I say goes straight into his ear. David, give a little wave for AJ, will you? See, look over there, in the corner.” I pointed toward the audience and AJ followed the line of my finger to David, who was waving at us from where he sat, 50 feet away.

David was monitoring the audio that would later be synced with the video footage; I liked being connected to him in this way. No matter where I was — fixing my hair in the bathroom mirror, stepping outside backstage for a quick breath of fresh air — David could hear me; even if we were physically separated and could not see each other, this connection remained intact. I found it reassuring.

Barbarella signing copies of her book, Diary of a Diva: Behind the Lipstick

Over the past two weeks, we filmed just about everything I did, which included visiting FOX6 and KPBS to promote my new book (Diary of a Diva: Behind the Lipstick); emceeing the Mr. and Ms. San Diego Leather contest; judging the tasty handiwork of ten chefs for a ceviche showdown; and, finally, meeting fans and friends and signing books at my big book-launch party. All this is for a project David and I are working on with a couple of executive producers out of Los Angeles. It was an insane, two-week whirlwind. But while I was being whipped about in the tornado of it all, David’s presence served as a calm and stablizing eye (and ear) of the storm.

Though all of the events were memorable, the most momentous for me was my book-launch party. This year marks a decade since I began penning my column for the Reader. The best thing about the book — at least to me — is that David contributed his own words. After ten years, the man I always write about finally writes back, and judging by the length of his commentaries that appear throughout the book, he had plenty to say.

Solare Ristorante’s owner Randy and Chef Accursio pulled out all the stops for the sold-out event. For over two hours, I sat at a desk and greeted people — old friends, and just as many new ones. I found it astonishing that all these people had shown up to celebrate with me, especially after reading ten years’ worth of my personal brand of crazy.

“Psst, beh-beh, can you hear me?” I looked through the crowd to see David — whose back was turned to me — nod his head. There was a brief lull in the line, a momentary gap in time that my brain rushed to fill with neuroses.

Rather than spinning things over in my head, I put my thoughts into words and shared them with David through the mic that was clipped on my shirt. “This is surreal. These people, they know me. Like, really know me. I actually feel remiss for not remembering their names, even if I’ve never met them before. Like I should know them, too. Is that weird?”

As if he could feel me staring at the back of his head, David turned, smiled an understanding smile, and shook his head. I took a deep breath, returned his smile, and then greeted the next person to approach me with a book.

At the end of the night, as we were packing up the audio equipment, I said, “I want to wear this all the time. I really like being constantly connected to you. It’s the closest thing to being telepathic.”

“Yeah, it’s pretty cool,” David said. “But it would be even better if it could go both ways. Right now, I’m able to hear you, but you can’t hear me.”

“Good point,” I said. “We should get some of those high-tech wireless earpieces, like the ones the Secret Service use.” I expected him to reject this idea, but instead, David’s dimples appeared and he gave a subtle nod. I became giddy and made a mental note to look into buying a two-way system before he changed his mind.