Summer is for Kids 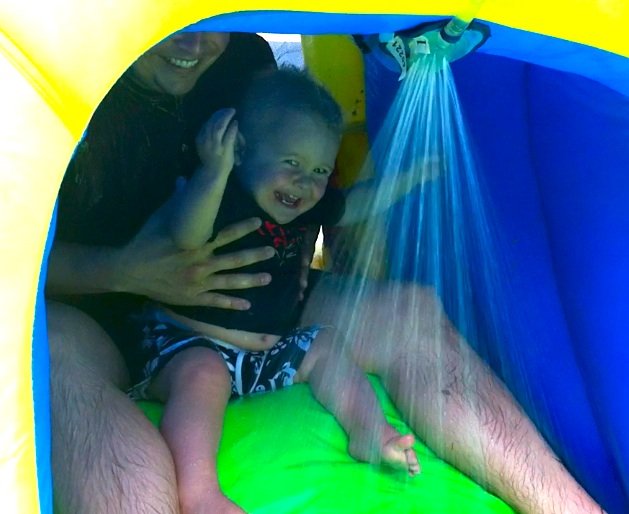 My nephew Joshua, about to go down the slide.

Sticky faces from melted ice cream, blood-shot eyes from chlorinated water, bathing suit wedgies and waterslide burns – not my idea of a fun way to spend the day, but the imagery does inspire in me a visceral memory of the exhilaration summer could bring. Though I am a jaded, moon-loving grown-up, I was recently able to steal a glimpse into my past, by observing a few specimens of the future – namely, my nieces and nephews.

David and I took a break from the monotony of moving to visit my family, all gathered in San Marcos at my sister Heather’s for a Fourth of July barbecue. Sean had been working on food preparations (including fresh ice cream and ribs) since the early morning, Dad was busy blowing up a beach ball for his youngest grandson, and my sisters were keeping an eye on their rambunctious children.

Adults sipped margaritas (one of Sean’s many specialties), and commented on the rare occurrence of humidity in a San Diego summer. Inspired by the childish antics around him, David took it upon himself to teach my niece Olivia how to shoot her pink water gun (a gift from Grandpere, which is what the kids call my father) in my direction. And only in my direction.

The kids enjoyed the inflatable waterslide, and the adults enjoyed watching them shriek with delight. David and I had to return to our chores before the grilled goods were served, which was our loss. Fortunately, at the end of the night and after several hours of work, we were able to see a spectacular fireworks display from our new patio.

Here’s a short video compilation of my niephlings enjoying summer, because they’re a lucky bunch of kids.