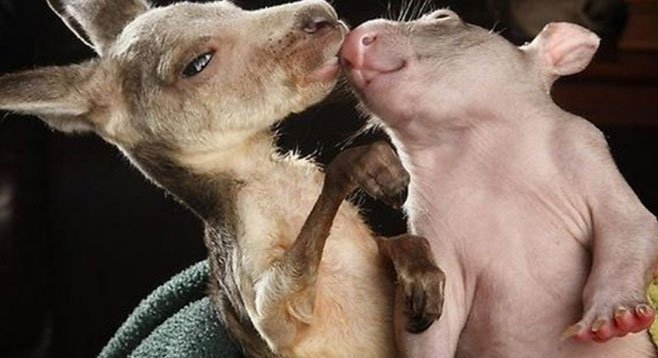 “Did you go down another rabbit hole?”

I lifted my gaze to peer over my laptop screen at David, who was smirking down at me. He sighed, and then ever so slightly turned his head to one side, as though he was too fatigued to bother with a complete left-to-right-and-back-again shake of the head. As I watched David not quite shake his head, the contorted expression on my face slowly relaxed.

“Why do you look at stuff that makes you grimace like that?”

“I’m inquisitive,” I said, evenly. We’d been through this so many times. I’ll click my way into one of the darker corners of the interwebs and become engrossed, with an emphasis on the gross part, until David eventually finds me, recoiling from my screen.

“It begins innocently, you know,” I said. David smiled at my defensive timbre. “I’m being honest here,” I insisted.

“How is it that I never end up looking at pictures of people with flesh-eating viruses?”

He had me there. After watching an episode of Cosmos in which Neil deGrasse Tyson spoke of microscopic “water bears” called tardigrades, I went online to learn more about them and how to avoid accidentally ingesting them. One click led to another, and the next thing I knew, I was gawking at images of a human botfly maggot being removed from a man’s eyeball.

I temporarily set aside my laptop in search of caffeine — reasoning with David takes supernatural energy. I dropped a purple pod into my Nespresso machine, pressed the button, and stared at the tan foam that formed atop the umber liquid pooling in the tiny cup. I stirred in some artificial sweetener, took a sip, and licked a bit of froth off my upper lip. Joining David back at the table, I said, “Don’t you ever get curious?”

Shaking his head (I noted it was a full, proper shake this time), David said, “No. Are you curious about how it feels to be burned alive?”

“Yeah, it does. Mentally, it hurts. You can’t unsee that stuff.”

“Are you telling me that you don’t look at pictures when you’re reading the news? Pictures that might be disturbing but reveal more information?”

“Yes, but only when it’s in the context of the story,” David said. “If I see something that says, ‘Warning, these images are not safe for life,’ it’s not like I’m going to click out of curiosity — I don’t need to look because I’m wondering how horrific they are.”

“No! That’s a giant red flag that essentially says, ‘Don’t click me!’ If you see a giant red button that says, ‘Do not push,’ are you gonna push it?”

“Maybe,” I said, chuckling at David’s exasperated huff. “You know, I don’t click just to see how horrible it is, either. I’m merely curious to know what’s on the other side of the door. And links don’t always come with warnings.”

“Oh, that reminds me! I found another corner of the web this morning — it’s called ‘butt Sharpies.’”

David threw his hands up and looked around the room, presumably in search of my sanity. He opened his mouth, probably to say something along the lines of, “I don’t want to know,” but before he had a chance, I blurted, “There’s this whole feed dedicated to pictures of girls who stick Sharpies up their butts. Some just have one Sharpie, but others…let’s just say they consider it an accomplishment to holster the entire rainbow.”

David was dumbfounded. While he was stuck searching for words, I just kept talking. “See, I clicked because the link had led me to believe I’d probably find people drawing pictures somehow using their butts. I didn’t expect it to be just close-up photos of Sharpies in butts. I didn’t go googling for photos of butt Sharpies, I just happened upon them in the normal course of internet exploring.”

Having finally found his voice, David said, “The ‘normal’ course? That never happens to me.”

“I look at good stuff, too, you know. In fact, that’s the kind of thing I search for — pictures that make me smile, like that baby wombat cuddling with that baby kangaroo. And heartwarming situations, like those marathon runners who went out of their way to shake the hand of an elderly uniformed veteran who was cheering them on. I look for the stuff of life, beh-beh. And it just so happens that horrific things are just as much a part of life as cute and cuddly animals.”

I took a sip of my espresso and kept going. “Weird stuff is entertaining in its own way. I just saw a video of an ox chasing people through a hospital. You have to admit, that’s an extraordinary happening, and that’s what makes it interesting. You enjoyed the Ripley’s Believe it or Not exhibit. Isn’t that the same thing?”

“The difference is that face you make. Do you not ever regret seeing something?”

“Well, yeah, there are some things I could have gone without seeing,” I admitted. “But for every truly, what-in-the-actual-fuck-am-I-looking-at–type image that makes my face shrink in on itself like it’s trying to escape into my skull, there are at least a dozen, Wow, I had no idea about thisclicks. Like, I just learned what ‘gurning’ is — an 800-year-old tradition of face-making competitions for which people make all kinds of wacky, crazy faces, and the winners are usually people with no teeth because they can make the most outlandish contortions. Isn’t that crazy?”

I’d almost forgotten what we were talking about and was about to reach for my laptop to show David some of the gurning shots I’d found when he stopped me. “You said there were things you could go without seeing,” he said.

“One out of 12 clicks? You’re playing Russian roulette with your psyche. What is it about those images that are forever burned in your mind that you wish you hadn’t seen?”

“I guess…they’re just… well, some of them were kind of traumatizing,” I said. “However,” I cut in, before David had a chance to gloat. “I now know that butt Sharpies is a thing. So you have to admit — worth it.”