Shut Up Already (Why I hate Supermarkets) 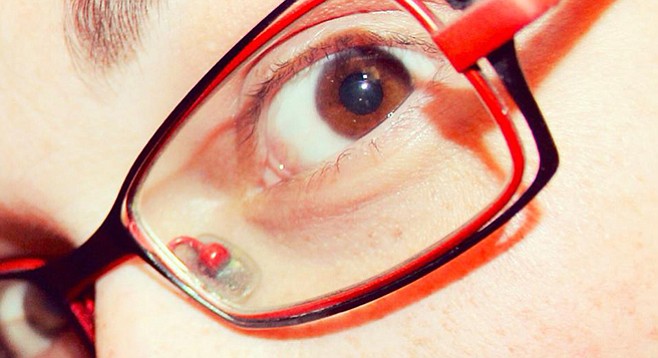 I have this tendency to fool myself into thinking my chronic anxiety is a ruse, something I claim hyperbolically for attention, like someone declaring she has OCD because she prefers a dirty-dish-free sink. When I mention my neuroses to friends, they come in the form of tongue-in-cheek disclaimers along the lines of, “Don’t mind me, my concerns are all made up,” or, “Sorry I didn’t hear you, it’s difficult to make anything out over all this clamor in my head.” I tell myself, and others, that I refill my standing prescription for anti-anxiety meds for the convenience of having them on hand should I happen to fall into a particularly stressful situation. But I know the truth: that every human interaction is a hand on the valve to my adrenal cortex — five fingers just itching to release a tsunami of cortisol into my system should a certain word be said or a look given.

Last week I made the mistake of leaving the safety of my living room under the pretense that I was a normal person with routine reactions to standard situations. I ventured into the grocery store — for me, a veritable gauntlet of overwrought small talk and twitchy missteps, made all the more treacherous by the fact that I went alone, without David as my touchstone.

I made it through Trader Joe’s without incident. Well, without a major one. There was that guy who complimented my glasses. At first I was confused because of the odd way he’d said it: “By the way, I like your glasses.” It was the “By the way” part that threw me. “By the way” — as if we had just finished up a conversation and he wanted to get in one last thought. I immediately felt guilty for the harshness in my tone when I said, “What?” I’d heard him fine, I just didn’t understand what he was saying. He responded with a straightforward, truncated version of his first comment: “I like your glasses.”

I imagine this is the point at which a normal person would respond, “Thank you,” then smile, and walk away. But I felt the need to mitigate the coarseness of my initial reaction by becoming warm and chatty. Overly chatty. I said, “Thank you, they’re fun, actually, they’re really old, see how this part is orange? That’s supposed to be red. I’m looking to find a guy who paints cars, I mean the cool detailed designs on them, with airbrushes, because I want to get these airbrushed back to the red that they were when I bought them, they’re practically vintage now they’re so old.” A voice in my head was urging me to “Shut up already, just stop.” But I didn’t. I complimented his glasses, said they looked like wood, and inwardly chided myself for seeming overly astonished when he told me they were actually plastic with an engraved wood design. Eventually, I managed to tear myself away. I tried not to think about the exchange, to avoid obsessing over my absence of cool.

Before the glasses comment, I had been in a bubble, ignored and ignoring, just another person shopping. With my bubble popped, I found myself becoming ever more vigilant, lest I nervously babble in someone else’s face. I spotted, and then avoided an acquaintance by lingering longer than necessary in the wine aisle. Up and down, left and right, I smiled politely to everyone I passed while being careful not to make eye contact.

After executing the right amount of friendly banter with the cashier, I breathed a sigh of relief and pushed my cart, full of bags, toward my car, elated that I made it out unscathed. I had almost made it to my car when, suddenly, there appeared a smiling, familiar face before me. Familiar, and yet I couldn’t quite place it. I often tell people I need two points of context to fully recognize someone — it could be the name of a friend we have in common, a hobby, a place of work, anything, so long as there are at least two dots, so I can connect them. The line between those points is the password to my mental file with that person’s name on it. Once I have access, I’ll remember everything, down to the name of their pets. But without it, when I encounter someone out of context, I’m lost. I imagine this is how people with true face-blindness feel.

I searched for identifying markers, taking in the ballcap and shorts, and quickly decided he was an old friend from Boston. The first words out of my mouth were, “What are you doing here?” He said he didn’t know what I meant. I told him I thought he moved back to Boston. He said he’d recently taken a weekend off, but he hadn’t moved anywhere, and had never even been to Boston. I actually argued the point. “What are you talking about? You’re from Southie. Are you fucking with me?” He told me he was born and raised in San Diego. My brain spun. What is happening, how am I getting this wrong, I’m so sure...I was so sure.

He chuckled uncomfortably and said, “Is this what you’re like sober?” He introduced me to his girlfriend and asked after David. I gave a too-long answer and then we parted ways. It wasn’t until he disappeared around the corner that his odd comment about sobriety triggered a connection, and then I felt like an absolute moron. This wasn’t my friend from Boston, this was my friend José from my late-night haunt, Starlite. José, who is always dressed to the nines. The ballcap, shorts, and daylight had thrown me. I couldn’t tell which was racing faster, my pulse or my thoughts. How could I confuse two people I had known, and seen regularly, for years?

After blitzing another old friend with requests for José’s number, just to realize I already had it in my phone, I texted José an overly profuse apology, along with full breakdown of how and why I’d confused him with someone else. By the time I got home, I was so frazzled and worked up that I had a little cry to release some tension before unloading the groceries. I took a pill to calm my body, and, as I stared at my phone waiting for a text-back, I thought that next time, it might be a good idea to take that chill pill before leaving the house.