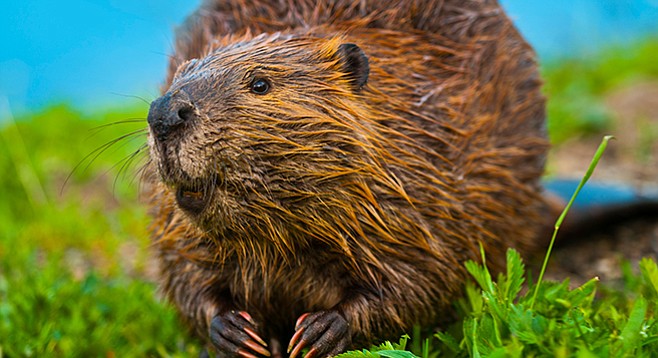 Nature abhors a vacuum, and thus it is within the lulls in conversation that the most random bits of trivia are blurted out. Usually, I’m the one doing the blurting, to mixed results: I receive the attention I crave, but then the warmth of the spotlight is replaced by chilling neurosis as I worry about how each person in the room might have perceived my random, unsolicited recitation.

I was not the one to spit out this gem — that honor went to my friend Mel. I had the unfamiliar but not unpleasant experience of being among the bystanders, who were stunned into a morbid-fascination-filled silence. There were several of us forming a misshapen circle; half of us were enjoying donuts — plain with a hint of vanilla — that had been fried and glazed by our friend Grace.

“Vanilla comes from vanilla beans,” David said in his “I know my way around a kitchen” voice.

“I don’t…wait…beaver butts? I’m going to have to look that up,” I said.

In the meantime, we all needed more information. I asked the question burning brightest in my mind, which was, “How in the world did someone figure out that a substance found inside beaver butts could be used to mimic the flavor of vanilla?”

Mel was ready with an answer. “Apparently, people noticed that beaver droppings sort of smelled like vanilla,” she said. A satisfactory response, though it didn’t directly address my question. I imagine you’d have to get perilously close to a beaver’s droppings in order to ascertain its aroma. Then again, who knows how far the odor carries — I’ve never smelled it; most of my encounters with nature have been narrated by David Attenborough.

The word “secretion” is inherently gross to me. Add in matter that is as universally repellent as excrement, and you have a recipe for scrunch-face. I was mildly amused when, upon my first carefully worded online search, I discovered the fact that, as with whale vomit, the musky beaver butt juice is a common ingredient in perfume (transforming the repulsive into the alluring). But I was flabbergasted to learn that the “not poo, but close enough to it to give me the heebie-jeebies” substance has been harvested and used by humans as far back as the time people were still getting used to the Julian calendar. Roman naturalist Pliny the Elder documented dozens of medicinal uses for the stuff, which I now know is called castoreum. “Castor” is the Latin word for “beaver.” Castor oil was named for its similar taste to castoreum.

For many hundreds of years, scientists referred to the sacs that contain the “oily and bitter orange-brown” castoreum as testicles because they’re located in the beaver’s taint (the area between its anus and genitals). Reading this nugget of information elicited still more scrunch-face.

In a time before ours (and currently in many areas around the world), poop is simply a fact of life, especially for farmers. It’s no wonder they tried to find a use for it all. Of course, for anyone who’s been around a lawn or landscaping, manure is a given, something we accept. All around the world, there are people who don’t shy away from investigating and employing uses for what most of us think of as “waste.” For example, in Alaska, there’s a Moose Dropping Festival, where you can buy earrings made of moose nuggets. In Thailand, fibrous elephant dung is made into paper. And in China, a country known for its resourceful remedies, flying-squirrel poo is steeped in tea and served to women who are suffering from menstrual cramps.

Castoreum isn’t even poo — it’s found near poo. Beavers use it (mixed with urine) to mark their territory. I’m sure by the time it’s filtered, synthesized, and added to food, it’s devoid of harmful fecal matter. On labels, it’s buried under the ambiguous “natural flavors” designation. This phrase is the catch-all canopy beneath which manufacturers hide all the stuff that, were it spelled out, might disgust consumers with delicate sensibilities — people who prefer not to know where their food comes from. Most soccer moms I know don’t want to think about all the ground-up bugs used to color their fruit juices and strawberry yogurts.

As much as it may gross me out, I want to know what’s in my food and my cosmetics. As a child, I was told to cover my ears and close my eyes during certain parts of movies. My parents wanted to protect my sisters and me from whatever horrors appeared on the screen. This drove me crazy — the monster you see is much less frightening than the one you imagine. As we grew older and watched those same movies sans supervision, I learned that I was most often “protected” from seeing boobs. The silliest, most natural thing in the world, our bouncy body parts, and that was the horrible thing I was not meant to see; the sounds of pleasure a woman emitted when her bosom was touched I was not meant to hear.

All of this is to say I’m now armed for the next lull in conversation.