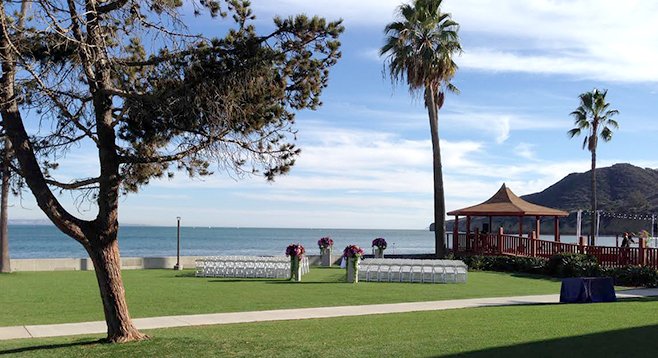 The air remained a balmy 80 degrees when the sun began to dip behind the Point Loma peninsula. The azure sky was festooned with wispy white clouds that hung low over the deeper blue of the ocean. The soft, synthetic lawn was a perfect golf-course green. It was a lovely location for a wedding.

The setting was not only gorgeous, but also exclusive, as it was located on the Naval Submarine Base. My father, a retired lieutenant commander, had tried to score this same location for two of his four daughters (Jane was set on that castle in Ramona, and I eloped), but each time someone else had already snagged their selected dates. As guests began to arrive, I mused aloud to David at how far we’ve come as a country: from the government’s “Don’t Ask, Don’t Tell” policy, to a gay wedding ceremony right here on secure military property.

At the rehearsal dinner the night before, Jackie’s aunt had told me, “This will be my first same-sex wedding.” I could tell by the way she said it that she was excited; not just for her niece’s happiness but also for her own edification. I deduced from the awards on the walls and books on the shelves that she had an Ivy League academic interest in the social sciences. “I’m just curious to see how it goes, you know, who says what, and how they handle the vows,” she added.

Because I have a number of LGBT friends, I easily forget that most people — regardless of how liberal they may be — don’t have direct and regular interaction with alternative lifestyles. I sometimes swim in the mainstream, but I am more often found splashing about in some subcultural streamlet.

I’ve attended same-sex ceremonies and have many friends who have gotten hitched since it became legal to do so in their states. Just this summer in New York, my Aunt Diane eloped with Susan, her partner of 28 years. For their announcement in the New York Times, Aunt Diane explained her position with heartfelt sincerity and a hint of sarcasm: “After careful deliberation, we decided to get ‘married,’” she wrote. “We want the protection it offers us and another statistic for the historical record. We are grateful to all those who fought the painful fight to make this possible. After 28 years of a loving partnership we hope we can weather ‘marriage.’”

Jackie and Jill (the spouses-to-be) had asked me to read a poem during the ceremony, an honor I was quick to accept. When my friends Nancy and Carole tied the knot, they both wore white dresses. Jill was dressed as a traditional bride, in a white gown and gossamer veil, but Jackie was wearing black pants, a white tuxedo shirt, and a custom-made, purple and black, corseted Victorian-style vest with a high collar.

When it was my turn, I read the poem the way I’d practiced it, with deliberate pauses and inflection, and then returned to my seat. I had a direct view of Jill’s face, and she was beaming. The sun was on her, but it seemed as though she were lit from within, radiating her own light outward.

It was while I was appreciating this visage of happiness that it occurred to me Jill’s family was seated on the wrong side, with a clear view of Jackie’s face, but not of Jill’s. I glanced over at Jill’s family, and saw her mother’s smile; her brother’s attention toggling between corralling his two toddlers and listening to the nuptials; her father seeming to appreciate something on the water, maybe the large container ship that was passing by. But when I glanced back over a few minutes later, I noted that the father’s gaze was still fixed on the now boat-free water. It was then that I registered his body language: arms crossed, head turned sharply to the left, while his daughter was reciting her vows to the right. He remained frozen in that exact position for the duration of the ceremony.

Later, as we made our way to the reception area, I pulled my friend Megan aside and asked, “What’s the deal with Jill’s dad?”

“It’s a huge step for him to even be here today,” she explained. My heart sank as my fear was confirmed — Jill’s dad was uncomfortable with his daughter’s homosexuality.

“That’s really sad,” I said. When Megan began to nod her head, I clarified, “I don’t mean sad for Jill. This is a great day for her — she’s surrounded by people who love her and support her, and she’s obviously glowing with happiness. I mean, it’s sad for her dad. I feel bad for him. He’s the one being deprived today. Most parents just want their kids to be happy, and that’s enough. But this guy, he’s robbing himself of this moment; here he has a chance to bask in the fact that his daughter is happy and healthy, but instead he’s over there pouting because the things that make her happy aren’t the same things that make him happy.”

The situation reminded me of that old saying, “Holding on to anger is like grasping a hot coal with the intent of throwing it at someone else — you are the one who gets burned.”

“I wonder if he’ll live long enough and grow as a person enough to look back on this day and regret what a narrow-minded nincompoop he was being on his daughter’s special day,” I said.

Megan and I were still off to the side chatting when the DJ invited the newlyweds and each of their fathers onto the floor for a daddy-daughter dance. As I watched Jill lead her father to the dance floor and bring him in for a hug, I realized I had been too quick to judge. Despite his apparent disapproval of this wedding, Jill’s father had still shown up. As they swayed to the music, the aging man held his little girl tight, evidence of the love he felt, regardless of whether or not he agreed with her life choices. As the father and bride glided around the dance floor, I noticed that I was not the first, nor the last, to wipe joyful tears from my cheeks.