In love with the child-free life 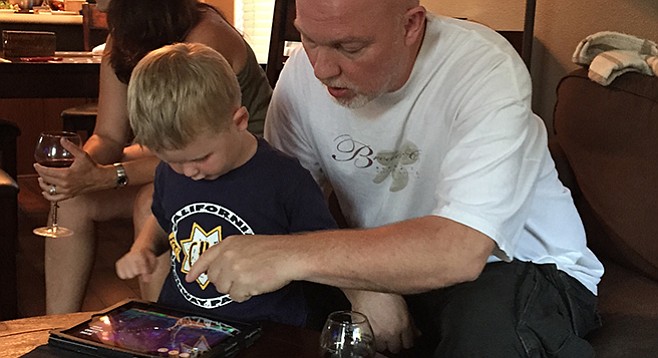 Without trying to parse the babble, I allowed the familiar clamor to wash over me as I perused each face upon which my eyes happened to fall: my mother, David, my three sisters, their husbands, and the six children between them. It was hard to find a mouth that wasn’t moving. My gaze came to rest on my nephew Brian, who was busy analyzing his new cache of foreign candy, a collection of pink and green Japanese confections David and I had picked up at Mitsuwa on our way over. My family gathers en masse at least once a month; on this day, we were together to celebrate Brian’s 11th birthday.

In July 2004, one month before Brian was born, I turned in the first installment of this column, titled, “I Kid You Not.” It was a piece about the frustrations of being a 20-something-year-old woman in a committed relationship expressing her lack of interest in child-rearing. I used words like “breed” and “spawn” when referring to those who chose to procreate. Looking back, I cringe at some of the more alienating word choices, but I remember why I made them.

I was angry and defensive. Each time I shared my decision to forgo parenthood, the recipient of this news would transform into a clairvoyant. “Just wait,” she would say, in her all-knowing, older-than-me-ness, “you’ll change your mind.” And it was always a “she”; for whatever reason, men didn’t see the need to tell me I was wrong, at least not about that. Even the receptionist at work, who was probably around 40 at the time, took to singing at me each time I passed her desk, “First comes love, then comes marriage, then comes the baby in the baby carriage.”

I didn’t have to worry about birth control. When I met David, he’d already had a vasectomy. This became another point of contention with my friends and family. Dismissing my capacity to make my own decisions about my future, upon learning this tidbit most everyone would nod in a sad, condescending way, and utter a little, “Oh,” as if to say, “I get it now — you’re settling.”

But that couldn’t be further from the truth. When, on one of our first few dates, David told me he was fixed and that he was uninterested in children, I was elated. I felt as though he’d pulled me out from under a heap of wreckage and gave me CPR — I breathed anew without the burden of having to plan my life around a hypothetical person. But it soon became clear to me that everyone else in my life was incapable of believing that I, a 20-something woman, was competent enough to relinquish my evolutionary prerogative. In fact, every decision that I made in the first few years of my relationship with David — from which brand of toilet paper I bought to which candidates I voted for — was attributed to him.

It’s no wonder I was so angry and defensive. The week “I Kid You Not” was published, a strange woman pushing a stroller yelled at me from across the street as I walked through Hillcrest, “You’re wrong about children!” Even she, this random new mother who recognized my face from the paper, thought she knew better than I did about my own life. After that, I stopped trying to convince people that I knew what I wanted (and didn’t want) out of life. It was too exhausting, too frustrating. They were never persuaded. “Just wait. You’ll change your mind. You’ll see.”

My niephlings now range in age from 2 to 13. While I watched the little ones antagonize the dog of the house (a year-old miniature Aussie named Duster), I half-listened as my sisters, their husbands, and my mother discussed the trials and tribulations of college enrollment. “So soon? They’re not even in high school yet,” I whispered to David.

“In four years they will be,” David said. “We were in our last place for four years…remember how quickly that flew by?” He was right, of course. People always said the older you get, the faster time goes. That was one prediction that proved true.

Now that I’m in my late 30s, I rarely encounter those clairvoyants from a decade ago. At some mystical point people stopped presuming to tell me they knew what I wanted better than I did. As I settled into my life and grew more confident in my choices, I noticed that my anger had dissipated along with the defensiveness. The Barb of today would never refer to a parent as a “breeder” because that diminishes another’s choice, just as assuming I’m sad because I’m “childless” belittles my choices.

Every few years, I take time to reflect on this major life decision. I ask myself if I have any regrets. And the truth is, I absolutely do not. I love this life I have chosen for myself. I love the fact that I no longer feel the need to justify my choice by listing my joys.

As always, David and I enjoyed visiting with our niephlings, even moreso now that they can hold conversations. I basked in the family time, appreciating the fact that all four of us sisters get along like the best of friends and that we live close enough to each other to facilitate frequent gatherings. I adore being the eccentric aunt with red streaks in her hair. When the gifts had been opened, the birthday song sung, and the cupcakes eaten, David and I gathered our things and headed out. Despite all the excitement, or perhaps because of it, once back at home we savored the quiet tranquility of our child-free life.