I should be happy 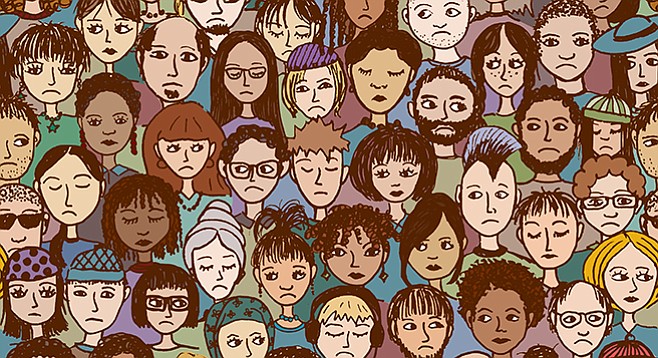 Today, I feel fine. When I awoke this morning, my heart was beating normally, and my mind was at ease. I wish I could capture this feeling and lock it away. I’d never lose the key — I’d put it on a long, silver chain around my neck, so that it nestled just over my heart, so I could always feel the reassuring weight of it: a gentle pressure as soothing as my mother’s hand upon my forehead.

I told David I couldn’t imagine feeling the way I’d felt over the past several days. “Yesterday, I couldn’t begin to comprehend a world where anything was fine,” I said. “But today, I can’t understand how I could ever think that way. It’s like there are two different ‘me’s.’”

Yesterday, I was not fine. I awoke with a start, and my mind immediately hunted for and found a catalog of distressing thoughts: Nothing matters. We are alone in this world. Everyone dies. Life is pointless, and I am an unnecessary blip in the misfortune that is humanity. Tears trickled down my cheeks as I brushed my teeth.

Whenever I’m down, David asks why. More often than not, my response is, “I don’t know.” This time, however, I could trace my tears to two origins. First, there was Kurt. An acquaintance, and a known advocate for mental health awareness, Kurt was open about his struggles with depression, and he worked hard to provide resources to anyone in his community who might be contemplating suicide. In a recent Facebook post, Kurt wrote that he was working on a story about suicide prevention. He posted a photo of a woman holding a sign that read, “Suicide does not end the chances of life getting worse, suicide eliminates the possibility of it ever getting better.” A month later, to the day, Kurt killed himself.

“I don’t get it,” I said to David. “If someone like Kurt can’t find a glimmer of hope in a moment of despair, what chance is there for the rest of us?”

I was sad and confused about Kurt, but it was the second thing — the article — that pushed my psyche over the edge and into the abyss of a major depressive episode, or what the textbooks define as a “severely depressed mood and a loss of interest or pleasure in everyday activities, accompanied by other symptoms such as feelings of emptiness, hopelessness, anxiety, worthlessness, thoughts of death.” Etcetera, etcetera.

The article was a New York Times piece by N. R. Kleinfield titled, “The Lonely Death of George Bell.” It was about what happens to the 50,000 or so people who die alone each year in New York City. After reading the story, I couldn’t get the idea of death out of my mind — the impending deaths of my loved ones, my own death. It occurred to me that the only way to control the most unsettling aspect of the inevitability of death was to plan the when and where.

On an intellectual level, I knew everything was okay, as far as okay goes. I mentally ticked off the reasons I should be happy: I have family and friends, a wonderful husband, a career I like, my health. It wasn’t working. This is why I don’t tell people how I’m really feeling — they tend to list the reasons why I should be happy, which makes me feel worse. They might as well feed American quarters into a Japanese vending machine: it could be a million dollars’ worth of good advice, but the machine won’t accept it. My frustration over feeling miserable, my anger at myself for not being able to “get over it” and “cheer up” adds fuel to the fire that burns cold within me. Feeling like a failure for not “being happy” makes me hate myself.

When David saw me crying and asked what was up, I could have faked the smile I reserve for most people when they ask how I am, and respond with the usual, “Great!” But this was David. If I didn’t let him in, the sense of isolation that had planted itself within me would grow and take over until it had become permanent and irreversible.

I was afraid to say it, as if saying it would somehow make it more real. But David’s patient eyes, his calm silence, eventually drew it out of me. “I’m struggling with depression,” I said, and with the words came a new rush of tears. “Gah, I feel so stupid. Like, I know this is dumb, and in my head I know everything’s fine, but I just feel so…like I can’t feel anything other than sadness. Like there’s nothing to look forward to.”

“It’s not dumb,” David said. His brow furrowed into a forlorn crease — the look he gets when he wants to help but doesn’t know how. I chided myself for bringing him down, but only for a moment. Because soon I realized that forming the thought and saying the words had somehow, just a little, taken me out of the feeling of it. For the first time in a week, I had the desire to crawl out of my dark hole.

That was yesterday. Today, with an easygoing smile as I added fruits and nuts to our morning yogurt, I said, “I’m sorry I was so melodramatic this past week. I kinda wish I hadn’t said anything because I’m totally fine now. I love my life. I don’t get how…” I trailed off as I tried to find the words. A wave of emotion crashed over me as I suddenly remembered the emptiness I’d felt just a day ago. The hopelessness. “That sad person, that’s not me,” I said. “The worst part about feeling that way is that I can’t control it. I can’t logic my way out of it. Because when I feel that way, nothing that matters to thisme matters to that me. Jesus, listen to me, I sound like a crazy person.”