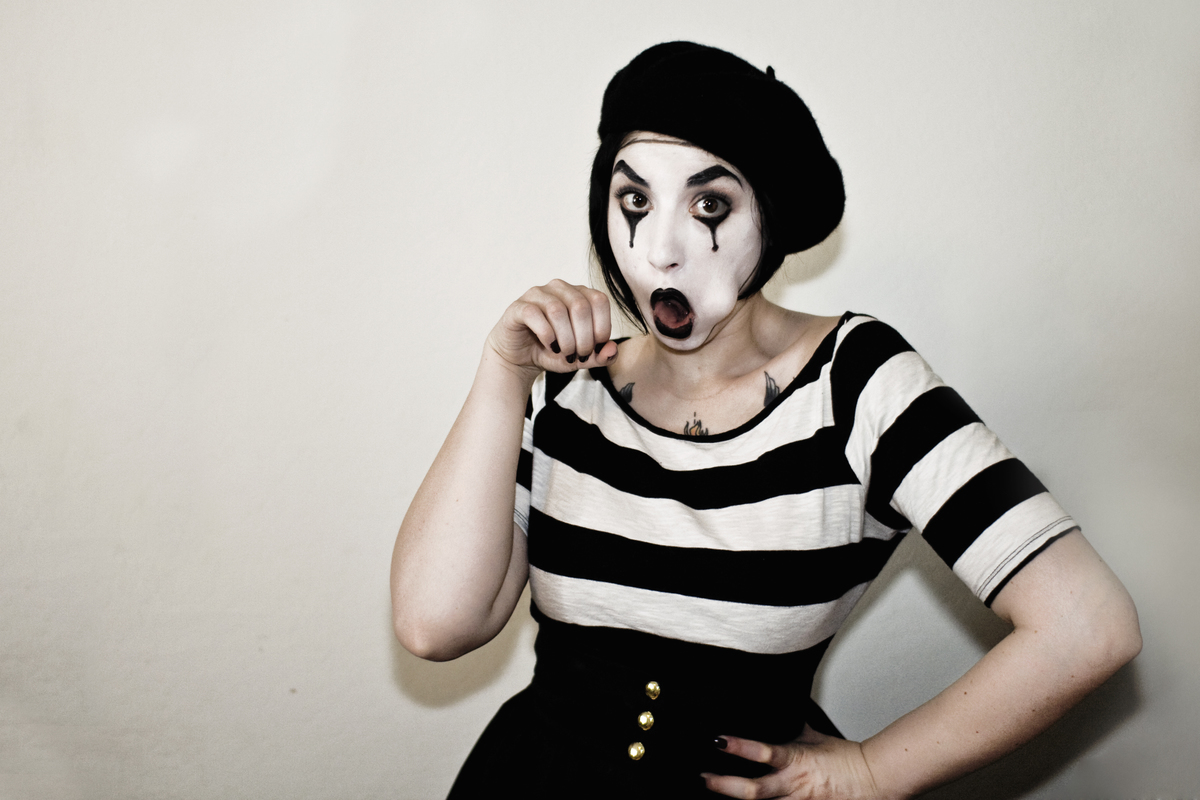 “Ooh, I know!” Terri’s face lit up so suddenly and brightly, I pictured a little cartoon bulb over her head. “What about mimes? I even have the perfect outfit to wear.”

“No mimes,” David said with an edge in his voice.

“What? Think about it, beh-beh,” I said. “It would be hilarious to watch Terri try to be animated. She’s usually so…not.”

“I said no. No mimes, and that’s final,” David said more curtly.

“Seriously, I don’t think you see the potential for hilarity here, and, you know, miming is one of the first things actors have to learn —”

“Do you not hear what I’m saying? We’re not doing mimes,” David snapped in a tone reminiscent of my mother when she’d finally had it “up to here” with her four daughters pestering her to add more impulse items to the shopping cart. “I. Hate. Mimes. There will not be mimes on our show. Ever. So don’t bring it up again.”

Terri and I simultaneously pulled back our heads and widened our eyes at each other, which is the universal body language for What is that guy’s deal?

We’d been brainstorming subjects for our friend and creative cohort to feature in her “Terri Tries It” segment that appears on the art-centric TV show that I produce and David directs. So far, Terri had tried everything from ballet to glass-blowing. David was often skeptical at first — he required convincing and thought-out planning before he’d even begin to consider a subject. But he had never before displayed this much contempt for any one idea.

“I don’t like mimes, you know,” I said. “I don’t find them funny at all, but I don’t hate them. What is it about them that you hate so much?”

“Hate’s a strong word. It would probably be more accurate to say that —”

“Fine, forget about hate, that’s not the point.” I fought off an argh, took a deep breath, and continued, “Why do you strongly dislike mimes? Is it because they’re like clowns? I mean, I hate clowns. Like, I really hate them. They freak me out.” I imagined David must have had some terrifying childhood mime encounter.

My coulrophobia (fear of clowns, it’s a thing) began when, at a young age, I saw the movie Poltergeist, in which a clown doll tries to kill a boy. As if the nightmares featuring that creepy killing toy clown weren’t traumatizing enough, I also watched Stephen King’s miniseries It, in which Tim Curry plays an evil monster clown with sharpened teeth. Killer Clowns from Outer Space sealed the deal.

I never understood why anyone would actually like clowns, but I knew better than to assume that everyone hated them as much as I did. My sister Heather was as freaked out by the scary, murder-y clown in Poltergeist as the rest of the family. But, unlike her three sisters, Heather managed to compartmentalize clowns into one of two categories: horrifying or beautiful. The ones that looked like Bozo — with their red noses and painted smiles and puffy hair — were horrifying. But sad clowns — with their white faces, dainty painted lips, and a single tear on one cheek — were beautiful.

Heather collected sad-clown dolls; they had porcelain heads and plush, silken-clothed bodies. They ranged from five to ten inches tall and were costumed with either a conical cloth hat or Elizabethan ruffle around their necks. Heather’s room was small, so she came up with an ingenious way to display her entire collection: she used thumbtacks to pin the dolls to the ceiling by their hats or ruffles. Whoever entered the room was greeted by 20 cold, unblinking porcelain faces staring down at them.

One night, while Heather was at a slumber party, I went to sleep in her room. Until then, I’d always slept on a plain old mattress with a polyester blanket, but my older sister had a waterbed with a white satin comforter. As I lay on the waterbed, making the occasional adjustment to get comfortable, the movable mattress beneath me would sway. On the ceiling above me the sad clowns seemed to swing from unseen nooses around their necks. Lit sideways from the streetlamps outside, they cast long, undulating shadows on the ceiling, and their faces, forever fixed, seemed to be simultaneously pleading for release and threatening revenge. That was the last time I tried to sleep in Heather’s room.

David seemed stumped to explain his reaction to mimes, so I asked Terri, “Okay, while he thinks about that one, what is it you like about mimes?”

“They pretend to be trapped in things, and that’s fun,” Terri said. “Also, they don’t talk too much. Oh! And they wear cool outfits.”

“It’s not that I hate them so much as I’m just really, really annoyed by them,” David said. “I get it — you think you’re trapped in a box. And why are their faces always painted white?”

“They’re French,” I said. “I thought you liked French things.”

“They’re overly enthusiastic and cheerful unless they’re terribly, terribly sad,” David argued. “It’s like pure physical comedy but without the comedy. They always wear the same black-and-white-striped shirt. What’s with that? And what they do is unoriginal. And they seem smug. Too smug for a person wearing the same outfit and doing the same routine that’s been done thousands of times by thousands of other mimes. The little ‘stories’ they tell are trite and simplistic — Ooh, I’m trapped in a box. The box is getting smaller, the walls are closing in. I know, I’ll pull on this rope to escape.Puh-leeze. Maybe the real question you should be asking is why don’t you guys hate mimes?”

It was kind of hilarious to see David get so worked up over something — usually I’m the one running the Histrionics Department of the household.

It was hard not to laugh in the face of such severity. Instead, I shrugged at Terri and said, “Sorry. We tried.”