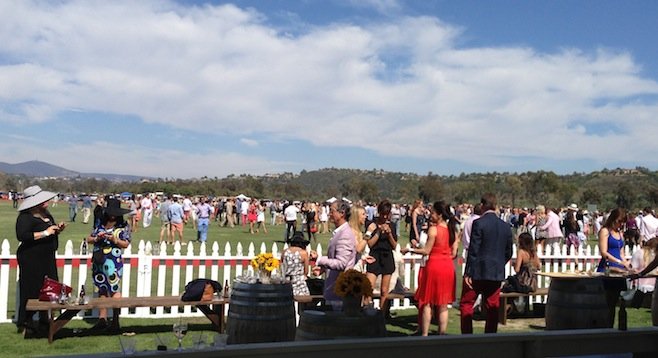 It was a perfect day in Rancho Santa Fe — wisps of white clouds floated through an azure sky and a cool, easy breeze complemented the warmth of the sun. The only thing missing from the exemplary Sunday afternoon was David.

My husband/business partner/best friend had stayed home to work. As curious as he was to experience opening day at the San Diego Polo Club, he couldn’t spare the hours to go watch “horse croquet.” I felt guilty for being outside on such a beautiful day, knowing David was stuck at the computer, equalizing audio and color-correcting footage for Art Pulse TV, a television show we’re producing.

My guilt was somewhat alleviated by my awareness that my man would be able to breathe easier and get more done without me around, all what-iffing and freak-outting over a million neurotically imagined scenarios, such as, what if all the computers crash at the same time and all the backups spontaneously combust? Realizing he was probably better off with a break from my anxiety, I collected my thoughts and refocused them on the moment.

I accepted a glass of champagne from a tray carried by one of the servers making her rounds in the VIP area. As I took my first sip, I reviewed the area around me, from the golden mallets arranged on the tent wall to the bright yellow sunflowers adorning every surface. The shade was an unexpected bonus; this flower wilts in direct sunlight.

Despite what I understood about horse-related events and ladies’ headwear, I had decided against flaunting one of the fancy hats from my disgracefully large collection, evidence of an unhealthy relationship I once had with a hat shop in SoHo. As much as I love my feather- and chiffon-graced brims, they demand my attention to protect them from errant gusts of wind or wobbly imbibers. This being my first polo match ever, I felt that my hats would not receive the consideration they deserved, and so I chose to attend sans chapeau.

Before that day, my only experiences with polo were a scene in Pretty Woman and the men’s fragrance counter at Macy’s. I noted the predominance of pastels around me — pink, yellow, and baby-blue. There was also a lot of white (pants, dresses, hats). Considering my closet is a study in the many shades of red and black, I forgave myself for not looking bright and summery. While in my forgiving mood, I also gave myself a pass for lunching on a frozen entrée before leaving the house, which left me uninterested in the tastier, fresher spread that was now before me.

The players paraded their ponies around prior to the match, and I got a close look at the horses’ glossy coats and neatly coiffed tails. There may have been an announcer, but from my shady spot inside the tent I couldn’t hear any announcing.

I was delighted to run into Marc Anthony, a friend from my old Hillcrest-nightclub days, and I carefully chose the word “delighted” when I told him how happy I was to see him because it seemed like a very pastel-wearing-polo-partygoer word to use. As always, Marc was rolling deep, this time with an eight-person posse. When he realized I was running solo, Marc was kind enough to leave his crew lounging in the sun and keep me company in the shade. 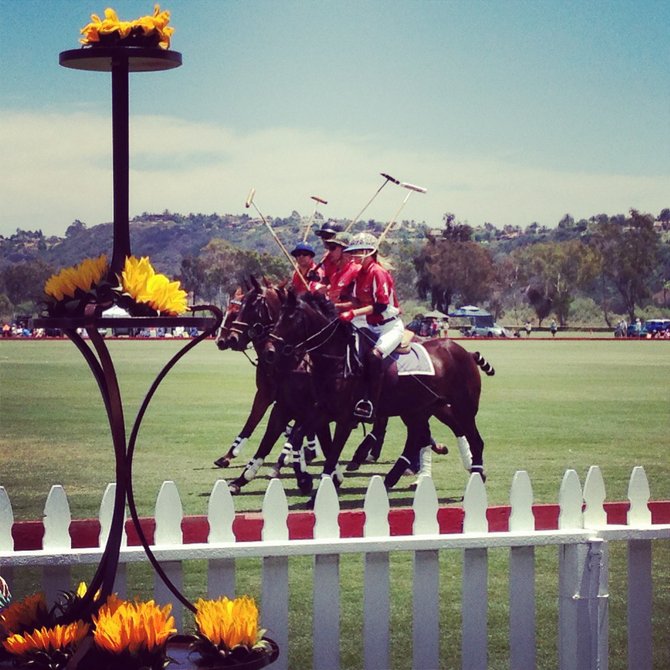 “So, what’s the deal…you been to one of these before?” I asked. He nodded. “What’s with the fact that no one’s actually watching the game? And it’s not stadium seating; there’s no way everyone could see what’s going on anyway, unless they were lined up along the side and tall enough.” That wasn’t entirely accurate — the expensive tables in the tent beside us were set on levels so everyone seated would have a clear view. But there weren’t many of them.

“Oh, honey, nobody watches the game, at least not that one,” Marc said, tilting his head in the direction of the match. “This is all about who’s with who and who’s wearing what.” He pointed around as he named names of local business owners: gallerists, restaurateurs, and people about town.

Marc’s friend Alex, whom I’d met about a drink earlier, joined us in the shade. I was appraising his pink pants when I noticed something amiss. “Your zipper’s down,” I said.

“Oh, that should be covered,” Alex said, adjusting his button-down and jacket to cover the unzipped zipper. “It’s broken.” Just as I was beginning to wonder why he hadn’t used a safety pin or chosen other pants, Alex explained that, while caravanning to the polo club, he was a passenger in the car next to Marc Anthony’s. As an early birthday gift to his friend (Marc’s birthday was the following day), Alex chose to offer a glimpse of his own ass pressed against the window for Marc’s amusement. It was in the process of ripping open his pants to get his butt up in time for Marc to see it as he passed on the road that Alex busted his zipper.

“That is so many kinds of awesome,” I said, relaxing for the first time since I’d arrived in the unfamiliar territory. Emboldened by the funny story, I decided to hazard the blazing sun for a bit. Emerging from my post in the shade, I ran into a handful of acquaintances, all of whom were facing away from the field as they drank and talked. As I was sipping my champagne and exchanging pleasantries, a sudden commotion caused me to turn and see hundreds of people rushing onto the pitch.

When I asked what they were doing, someone said, “Stomping the divots. Haven’t you ever seen Pretty Woman?”

“Yeah, but all I remember was a polka-dot dress and her being offended because someone called her a hooker or something.” It was at that moment that I realized the game was over and I hadn’t seen any polo being played.

When I returned home to a much calmer David than the one I left, I gave him the lowdown on the past three hours. “Do you know what ‘divot stomping’ is?”

“Yes, I’ve seen videos of Prince Charles and the like doing that, but I’ve never watched an actual match,” David said.

“Well, that clinches it,” I said. “Opening day was a great party, but now I’ve got to go back — with you — so we can both see what this sport is all about.”