He posted, she posted 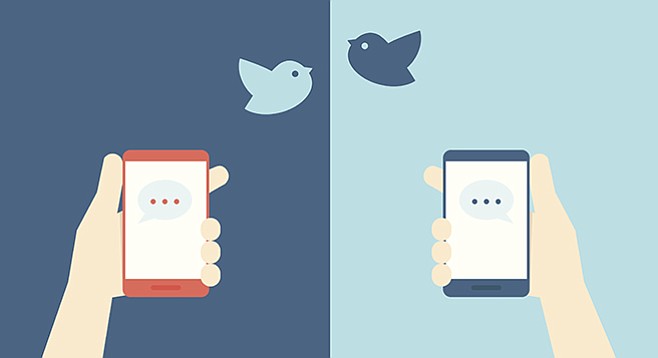 If there’s one thing I’ve learned from spending a dysfunctional amount of time on social media, it’s that people are overly attached to their opinions, myself included. You could post information that supports what you believe to be true in the form of scientific data, easily digestible videos, or celebrity endorsements until your fingers fall off, and you still won’t even begin to budge the opposing opinions of those who reached their verdicts long before you began making your case.

When it comes to certain hot-button issues — guns, abortion, religion, politics — nuance and etiquette are abandoned. It’s “Destroy all weapons!” or “Arm the masses!” It’s terms like “Repugs” and “Libertard” (hardly the sort of olive branches that lead to compromise). Activists are labeled “women haters” or “baby killers.” And the religious-based arguments — don’t even get me started.

Knee-jerk reactions, jumping to conclusions, getting all riled up at stuff that offends our sensibilities: it all seems to be in our nature. It’s incredibly difficult, if not impossible, to step outside our deep-rooted convictions and consider the possibility that we might —gasp! — be wrong. Our beliefs are intermeshed with our identity.

For those of us whose sense of self is entirely reliant on the structural integrity of our beliefs, the prospect of being wrong is incomprehensible. So we protect our egos by preaching to like-minded folks for all those reaffirming retweets and likes, and we get caught up in the never-ending cycle of posting links and longwinded comments to provide an onslaught of evidence in our crusade to “open the eyes of those other people.”

It’s stupid and pointless, but that doesn’t stop me from doing it. Despite all the evidence to the contrary, I maintain the silly, hopeful notion that if I word something just the right way, I might actually get through to the other side — that someone who vehemently disagrees with my own value-based stance will see my post and think, “Huh. Perhaps I’m looking at this all wrong.” Just as I’m sure all those people whose opinions I’m trying to change are just as frustrated that they can’t seem to get through to me.

I sometimes miss a simpler time when it wasn’t so easy to know what everyone around us was thinking. There’s a reason most of us, upon being given the hypothetical choice, would never choose “the ability to read minds” as a superpower. As Blaise Pascal put it, “If people really knew what others said about them, there would not be two friends left in the world.” We may not know what people are thinking about us individually, but it’s all too easy to decipher what everyone we’ve ever met (and even those we haven’t) — from old classmates and coworkers to the random person who just friended or followed — thinks about the rest of the world and everything in it.

I find some points of view to be horrifying. But more often, I find them fascinating. And, if I refrain from commenting but just sit back and watch as others make their arguments, it can even be entertaining. As my friend Kat recently put it, watching someone have a meltdown or witnessing a drama unfold by way of updates or comments is just as popcorn-chomping engaging as watching train-wreck reality television. Perhaps even more so, because you know there isn’t a team of producers behind the keyboard egging the characters on. The less people censor themselves, the more hilariously horrendous things can get.

There are entire forums online that exist solely for the purpose of discussing cringe-inducing posts, comment threads, or even private messages. In these forums, someone will post an image or quote (often redacting the original source’s identity) and a discussion will follow about how outrageous/amusing/dumb the person was being.

For example, one recent post (yes, I lurk in these forums, for research purposes of course) contained a series of screenshots wherein one man messaged a woman at least once a day for four months. She was unresponsive, but he kept at it, every day, message after message, all to get her attention and hopefully a date. Most of them were along the lines of, “How are you,” and “Do you want to chill.” Eventually, realizing he wasn’t going to take the hint, the woman finally responded, “Literally just cut it out. You’ve messaged me every day since September and I never respond.” To which the guy replied, almost immediately, “Sorry I thought you wanted to chill guess not.”

But the original cringe is only part of the show. The rest comprises clever, jocular comments. Regarding this “persistent creeper,” as the incessant messaging dude was dubbed, one spectator noted, “This guy’s got class,” and pointed to the one of his many messages, which read, “Just so you know if we do chill I’m not an asshole I don’t try to sleep with someone unless that’s what they want.” To which another spectator added, “He has a rapist wit.” Another observed that one of the creeper’s requests to chill had been on Christmas Day. There were nearly 1400 comments total, all witty observations or dumb jokes, all at the clueless guy’s expense.

My favorite kind of post is when people are called out for lying. Usually it’s because the liar made the novice mistake of incorporating a photo with some claim, without realizing that photos can be reverse googled. One kid recently learned this the hard way — after constructing a story via a series of tweets about his band’s big performance, he was called out by a more savvy musician who told him he’d reversed googled the images and found they’d been taken years before, of another band, in another town.

As I know all too well, once you put something out there — be it an image, a thought, a text, or an email — you can’t control how others will process and react. As strange as I might think it is for someone to choose a virtual stage, with all their closest friends and family in the audience, to recount every personal detail (including sexy bits) that led to a messy divorce, I can’t seem to turn away. It’s too mesmerizing, too ignoble, and all so human. So I scroll, and I think my thoughts, and for the most part, I try to keep my opinions to myself. The operative word being, “try.”