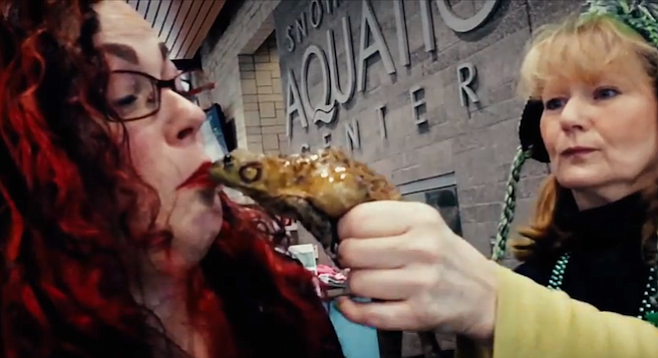 As the frog drew closer to my face, I did my best to suppress the words that had been uttered just an hour before by the woman who was now proffering the slippery varmint. She said frogs have teeth, and that they tend to snap at anything that moves in front of them, such as noses or lips. And now here she was, thrusting the creature — with those unnerving amphibi-teeth hiding somewhere within its impassive, wide mouth — straight at my face like tweren’t no thang. My head recoiled, my chin disappearing somewhere into my neck as the frog grew larger before me. Its horizontal oval eyes were narrow, its Muppet-like lips pulled tight in a frown. It looked like a miniature old man, one who was tired of my shit. And then — with a boop! — the cold, wet, smooth muzzle was momentarily pressed against my warm, red lips.

Snohomish Slew was his name. Actually, it’s Slew Two — the original Slew croaked for good just two weeks before what was to be his tenth anniversary “frognosticating” the weather for the Great Pacific Northwest. A decade ago, the residents in the town of Snohomish, Washington, decided that no East Coast groundhog like Punxsutawney Phil could presume to predict their “Best Coast” weather. And so it was that a handful of Snohomishites gathered at Fred’s Rivertown Alehouse and created GroundFrog Day, always to be held a few days before Groundhog Day, so they could get the “jump” on that high and mighty marmoty meteorologist.

I had David to thank for landing me in a town full of people who love puns almost as much as I do. My man and I had been suffering from cabin fever and were itching for a getaway that wouldn’t break the bank. David suggested we check out the snow scene in Colorado. While I agreed cozying up in a cabin sounded delightful, the pictures my friends and family were sending from the storms in New York and New England depicted a starker reality of the cold white stuff. Then, one day, as if to settle the matter, David got an email from a hotel we’d once stayed at in Seattle, offering a deeply discounted rate for return guests. While researching for something fun and different to do in the area, he learned about Snohomish, which is 30 miles northeast of the drizzly, artsy, coffee-and-books city we love.

“Ground frog?” I assumed he was making it up, partly because his impish dimple was showing, and partly because the concept sounded too absurd to be real. I laughed, politely, as if to say, “Good one,” but then David walked over to where I was sitting and placed his laptop in front of me. The quirky small-town event was the real deal.

He watched my face as I read the details. The frog was an American bullfrog, an invasive species that is illegal to keep in Washington state, but Thayer Cueter, owner of Just Frogs & Friends Amphibian Center, had gotten special dispensation. I learned about frog biology, at least the bits that were distilled into digestible bullets on the event announcements: male frogs vocalize when it’s mating season, so if the frog croaks (it’smore like a little moo, repeated over and over), spring is just around the corner.

“The frog arrives in a limo,” I announced. “A limo. And there’s a Princess Amphibiana — she’s pretty. Ha! There’s a security detail; they call them ‘Slew-Curity guards.’ This is crazy, I love it. I’m in.”

It was cold and misty the morning of the big day. But we didn’t mind — David was finally getting a taste of the winter he wanted, and I’d take 40 degrees over 14 any day. The gray haze all around us provided a dreamy quality to the already quaint and charming town. The main drag was set up alongside the Snohomish River. I yelped with excitement when I spotted an otter floating by. I’ve had an affinity for otters ever since (as a young girl) I lived on the remote, itty-bitty island of Adak, Alaska, where otters (along with bald eagles and caribou) reign.

Snohomish is a friendly town. Welcoming smiles warmed us from all sides wherever we went, from our early-morning coffee run at 7-Eleven to our post-ceremony lunch at Fred’s. As the day progressed, and the same familiar faces reappeared here and there, I began to feel like a local. On two occasions, I found myself notifying passersby about GroundFrog Day, each time to a local who hadn’t realized that the tenth anniversary frog ceremony was about to begin a block away.

I happened upon the Slew-Curity detail as they, along with Slew and Thayer (Slew’s keeper), were loading into the vintage 1941 Cadillac limo. There were four of them: two boys, two girls, all siblings, wearing black suits, sunglasses, and lime-green knit ties that their mother, who was standing nearby, told me she crocheted the night before. Members of the local Tim Noah Thumbnail Theater (Tim Noah himself would serve as emcee and perform the “Ballad of Slew” — yes, there’s a ballad), the kids knew how to play it straight — whispering amongst each other, intermittently raising a finger to their ear, all the while keeping stern, serious looks on their faces.

The limo, followed by a fire truck, slowly drove the short block down the hill and up to the gazebo that overlooks the river. Thayer emerged, and the short young guards surrounded her. Then they danced their way (a number choreographed by the eldest sister, set to “Hoppy,” a modified version of Pharrell Williams’s popular tune, “Happy”) to the stage, where Princess Amphibiana was waiting for her kiss.

Wearing a blinged-out silver necklace, Slew was pushed against the microphone and the crowd grew silent. Then, so imperceptible we couldn’t hear it — but Thayer and the mayor assured us it had happened — the great frognosticator let out a croak, thus proclaiming an early spring for the friendly, frog-worshiping citizens of Snohomish.

I turned to see that David was smiling as widely as I was, our mouths agape in awe and wonder, like a certain frog.

David, who usually rolls his eyes at my punnery, agreed, “It certainly is.”