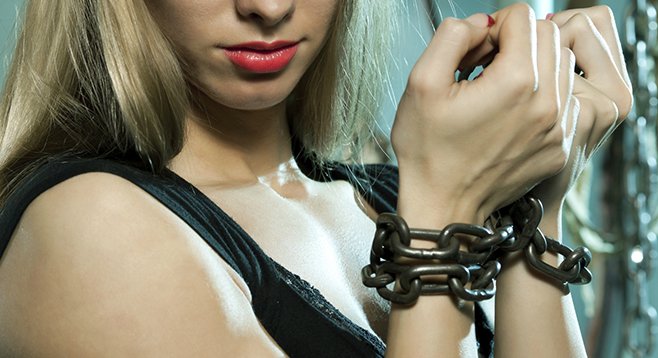 “Did you see the trailer for Fifty Shades of —”

“Fuck, no,” I said before Kerry could finish speaking the title.

Kerry laughed and nodded in support of my reaction. “My mother told me that book set women back 500 years,” she said.

David, compelled to play devil’s advocate, said, “Is it only considered abuse because the woman is in the submissive role? Wouldn’t it still be abuse if the roles were reversed?”

“Don’t you start,” I said. “Of course it would, but that would only be relevant if our entire history were matriarchal instead of patriarchal, and —”

“There are some societies that are matriarchal,” David cut in.

I growled and snapped, “Yeah, like one or two small tribes in the middle of nowhere that don’t matter — I’m talking about civilization.”

“My point is that it doesn’t matter whether it’s a man or woman doing the abusing, we’re all human beings, and things are either right or they’re wrong, regardless of gender,” David insisted.

“I’m not disagreeing on the human thing, but that’s not what we’re talking about,” I said. “This isn’t about whether or not abuse is ever acceptable, it’s about glorifying the idea of women being servile to men, whether they like it or not. I read somewhere that in one chapter, the chick character uses a safeword, and the dude doesn’t respect her boundaries and keeps on doing what he’s doing. That just echoes and encourages what has been — in most of society throughout the world, not teeny insignificant nowhere tribes — a systematic oppression of women!”

“And I’m saying that abuse is abuse,” David argued, “regardless of whether it’s perpetrated upon a woman or a man. If the book glorifies an abusive relationship then that’s just wrong — it’s not anti-women, it’s anti-human. And if it were a safe, consensual dominant-submissive relationship, where the woman enjoyed being servile to a man, it still wouldn’t be anti-feminist, any more than a relationship in which the man was submissive would be anti-masculinist.”

We continued bickering, our voices growing louder with each declaration, until Kerry shouted to point out that no one in the room had read the book. At this, we all burst into laughter. Mia refilled our glasses and moved us from the dining table, where we’d just finished eating Chinese takeout from Dumpling Inn, and into the living room.

“I don’t need to read it,” I said, once we’d all settled into our friends’ sleek sofas. “The excerpts online were more than enough for me; the writing is so terrible. The reviews, written by people who actually know how to form a sentence, are way more entertaining. Here…” I grabbed my phone and did a search. “This is an actual quote from the book: ‘If this guy is over thirty, then I’m a monkey’s uncle.’ And, ‘My inner goddess is dancing.’ I mean, come on… It’s like she’s trying to make readers groan, and not in a sexy way. Those scenes are even worse.”

I tapped around on my phone for a few seconds and then said, “Just listen to this one: ‘I feel the color in my cheeks rising again. I must be the color of the communist manifesto.’ Really? The communist manifesto is where your mind goes to describe a blush? She must have Google-image-searched ‘red’ and spotted a Russian flag. It’s such an awkward, cluster-fucky metaphor. The more I think about it, and how popular this freakin’ book is, the angrier I get. Like…madder than Lenin right before the Bolshevik Revolution. Get it?” This time, I was the one to elicit the groans.

My favorite purveyor of highbrow girl porn was Jude Deveraux. Here’s the first sentence from one of her books I grabbed at random: “The moon cast long shadows over the old stone tower which rose three stories high and seemed to scowl down, in a tired way, at the broken and crumbling wall that surrounded it.” So deliciously descriptive. Deveraux’s characters never utter asinine, dated phrases, such as “Jeez,” or “Holy cow.” And, sure, those historical romance novels aren’t very kinky, but for that I had Anne Rice’s Beauty chronicles, which were also well written, and way edgier than any of the cringeworthy sexcerpts I’ve seen from 50 Shades.

As with Two-Buck Chuck, a cheap, flat-tasting wine, 50 Shades seems to get the job done for the inexperienced and less discerning. There are countless articles lamenting the decline of society as evidenced by a general public that gobbles literary garbage. I don’t think of myself as a snob, but my nose does wrinkle every time someone excitedly asks me if I’ve read that damn book.

“I have an idea,” David said with a glimmer of mischief in his eyes. “We should start an ‘unread book club.’” This comment brought about the most energetic laughter of the evening.

After she caught her breath, Kerry said, “That’s a great idea. I mean, look how much we’ve been able to debate and discuss a book none of us have read. It’s like with that movie Blackfish, most of the people I’ve heard arguing back and forth about it admit they’ve never seen the film.”

“Ha! So we can have the Unread Book Club and the Unwatched Movie Club; it can be twofold,” I said. “We’ll just read some excerpts and reviews, watch some trailers, and then discuss our strong opinions at length. I love it. David, you’re brilliant.”

“That’s because I’m a man,” David said wryly, causing Mia, who was sitting next to him, to playfully punch him in the arm for me.

David put his hand on his arm in mock pain and said, “Now who’s being abused and oppressed?”