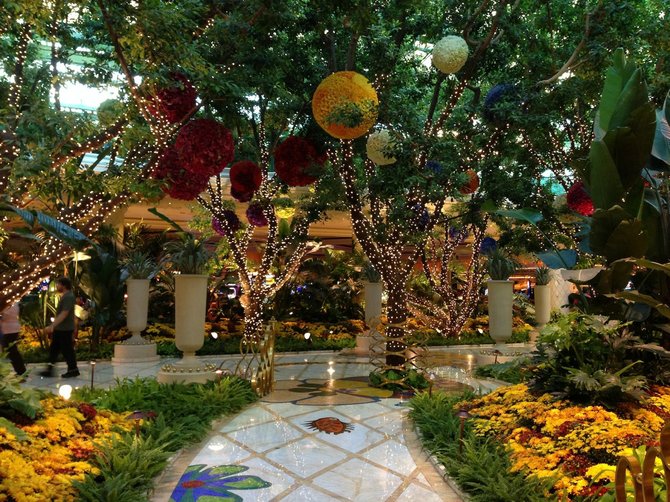 I found myself hesitating when a friend asked where David and I were going for our mini vacation. I finally responded in the least declarative way possible: “Vegas?”

“Vegas? Why Vegas?” She looked like she was swallowing vomit each time she said the word, and I suddenly felt the need to justify our decision to spend our anniversary in the same town where people can get “casually married.”

“We don’t really have time to fly anywhere — it’s the first three days I’ve been able to take off in over six months — and I don’t feel like dealing with the airport, so I thought, road trip!” My friend nodded in her attempt to understand, and I continued, “We were thinking of driving up the coast, but then everywhere we wanted to go was either sold out or way too expensive — it must be harvest season for all the wineries — and so I was, like, what about Vegas?”

I’d already won the argument with David, who has pretty much always been anti-Vegas, so my reasoning was rehearsed. “There are cool shows; the rooms seem nicer than the ones we were looking at up the coast, and at half the cost. There’re notable restaurants, sweet speakeasies, and tons of art.”

The next day, the topic came up again when another friend inquired after our plans. But this time, instead of a furrowed brow and a gag reflex when I said, “Vegas,” this friend got super excited and said, “Oh, man, I’m so jealous! I’m going in a month. It can’t come soon enough. Are you going to see any shows?”

The more I shared news of our impending getaway with others, the clearer it became that people tended toward one of two distinct responses — “Vegas? Why?” and “Vegas? Awesome!”

As the day of our trip approached, even David was getting excited for our food and art-centric itinerary. This was encouraging for me because David had made it clear after our one and only visit nearly a decade prior that he was not a fan of Sin City. We had stayed in a resort 20 minutes from the strip, somewhere in desert suburbia. Because we were there with a big group to celebrate a friend’s birthday, most of our weekend was spent waiting around for other people and doing stuff they liked to do that wasn’t really our bag, such as hanging out in casinos and hitting the clubs.

Since then, I’d been back to Vegas once, sans David, to accompany my sister Jane and a gaggle of her girlfriends for a bachelorette party. I was only in it for the entertainment value of what was sure to be a guaranteed train wreck. (Jane is adorable with a buzz on; some of her friends, however, transform into Mrs. Hydes at the first whiff of liquor.) The gaggle did not disappoint — that weekend, there were Bellagio-fountain-worthy waterworks, women traipsing naked in hotel hallways, bitchy pool encounters, and just enough scandalous activity to keep me interested.

But despite whatever fun I’d had, I still left town (driving, alone) with the impression that Vegas was exactly the way it had always been in my imagination: a continuous loop of mindless slaves for slots, attention-hungry women, lecherous misogynists, and close friends shooting indignant glares at each other over the hangover-brunch buffet.

But Vegas had undergone a major transformation since the last time David and I were there. Shiny new hotels such as Aria, Vdara, and Cosmopolitan had all sprouted up on the Strip, eclipsing the tired, old stalwarts such as the Riviera, Circus Circus, and the Mirage, which still wages its decades-old pirate-ship battle out front every night. 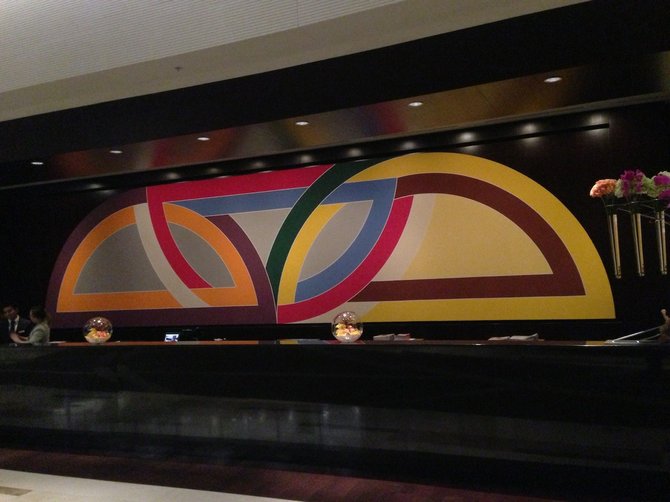 Frank Stella’s painting in the lobby of Vdara

Instead of the incessant din of seedy, labyrinthine casinos designed to trap and keep you, the current style of revamped interiors is open and airy (with tons of windows revealing whether it’s day or night) and filled to the brim with priceless works of art. When we arrived at the lobby of Vdara to check in, we spotted a famous Frank Stella painting just kicking it behind the reception desk.

The reason Vegas popped into my head as an option in the first place was because I’d been wanting to see Cirque Du Soleil’s “O,” their resident water-based performance at the Bellagio. But after we’d booked our hotel and tried to get tickets, we discovered that not only was the show crazy-expensive (over $400 for two), but all the good seats were sold out. At first, I despaired, but then I came across what appeared to be a similar water-based performance called Le Rêve, which had more affordable seats in a circular theater where each seat had a good view of the show. 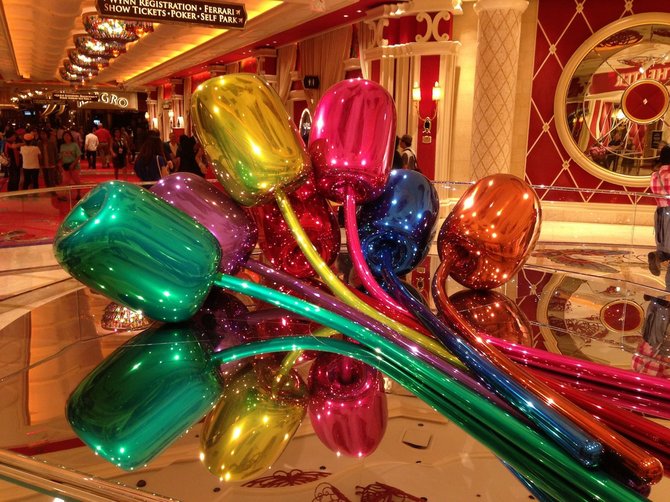 I hadn’t realized what an arts enthusiast Steve Wynn was. As we waited for the theater doors to open, we took photos of a giant, colorful, and shiny installation by Jeff Koons calledTulips, worth around $33.6 million. This Wynn guy didn’t mess around when it came to procuring art. In the hotel is also a painting of the same name as the show, Le Rêve, by Picasso, worth over $60 million. After some searching, I found out the Wynn collection also includes works by Van Gogh, Cézanne, Gaugin, Warhol, Matisse, and more pieces by famous dead men than I’ve ever found in a local museum. David and I strolled the perimeter and delighted each time we turned a corner and stumbled upon one treasure or another.

Later, as we exited the theater, I said, “That may have been the most amazing show I’ve ever seen.”

“I’m struggling to think of a better one,” David agreed.

“And SW Steakhouse was nice, though I’m really looking forward to checking out Comme Ça for our special anniversary dinner tomorrow night.”

“And don’t forget we’re also going to the Laundry Room,” David said of the speakeasy he’d discovered while researching fun things for us to do.

“I must admit, Beh-Beh, I’m really liking this new Vegas. Like, I’m thinking we should do this again — pick another show and catch all the things we’re missing this time around.”

I expected him to balk a bit, but instead, David nodded and said, “Yeah, maybe. I just heard of another cool speakeasy here, and this other place that is supposed to have amazing Japanese food.”