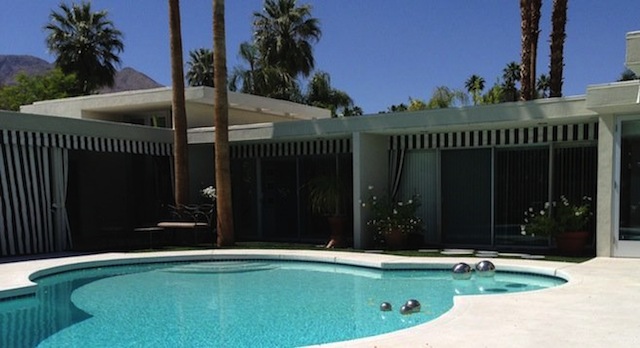 The pool at Larry and David’s

David held a tight grip on his phone as he snapped photos out the window of our speeding Mini. “How can it be 95 degrees down here when there’s snow on top of that hill?” He rolled up the window and turned down the air-conditioning by two degrees. “It doesn’t even look that high — I mean, we could probably just hike up there.”

“In this heat? I don’t think so,” I said. “I’d melt before we got anywhere near that top. Whoa — you see that? ‘Dink’s Restaurant and Ultra Lounge’?”

Both David and I burst into laughter. We found it hilarious that the gateway to the notable desert oasis for the LGBT community would be an “ultra lounge” christened with the acronym meaning “double income, no kids.”

In our ten years together, neither David nor I had been to Palm Springs. Before I met David, I’d driven through the area on my way to Coachella, in nearby Indio, and stayed in a hotel in Palm Desert, but I’d never been out of the car in Palm Springs proper. When I asked David what to expect, he said, “Gay and gray.” This made sense. The only people I know in San Diego who have second homes in Palm Springs are middle-aged gay couples, such as Walter and Todd, who are married and operate a salon in Hillcrest; and Jeff and Jeff, one of whom is my dentist.

We were in town because Paul Kopeikin of Kopeikin Gallery in Los Angeles was hosting an exhibition of photographic artwork by artists he represents, including David. The exhibition was being held at a private home, owned by a married couple — Larry and David — who I learned had been together for 35 years. 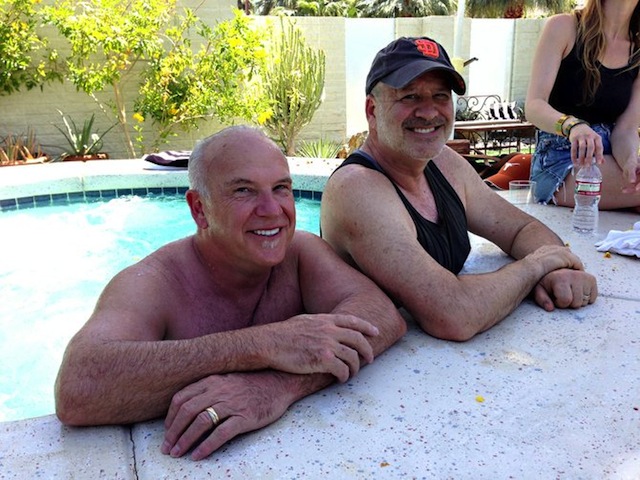 Larry and David in the jacuzzi

During an exploratory drive of the residential areas (a short drive — you could seat the whole population of Palm Springs at Petco Park), David and I remarked on how close to the ground and clean each neighborhood was. All houses were mid-century style — just one floor — and each yard had a manicured lawn and its own collection of nonnative flowers. The road at the edge of town was the oddest to drive: on one side, it was sand and tumbleweeds — on the other, emerald-green grass, palm trees, and colorful flowers. “Imagine how much water it takes to make that grass grow in that soil,” David said, first pointing at a lush, green hillside and then at the hard, dry earth on the other side of our car.

“If anyone can afford to import that much water into this dry hotbox, it’s a town full of DINKs,” I joked. But it wasn’t until we stopped by a coffee shop that I realized how gay-male-centric Palm Springs is. For one, I was the only woman present among 20 or so patrons. But the clincher was the commercial playing on a flat screen mounted over one of the doors. It was for a hair salon, advertising both its cut and color options, but unlike the commercials for salons in most cities, all of the patrons getting their hair cut and colored were men. It was as if I’d stumbled into a Starbucks in Del Mar, but all of the SUV-driving moms in yoga pants had been replaced by mint-condition-classic-car-driving interior designers in pastels. There should be no question as to which faction a fabulously bawdy bitch like me would rather kick it with.

On our way to the exhibition/party, David and I passed not one, but two mid-century-furniture garage sales and a gallery that sells only Shag-centric artwork. Upon arrival at the event, we were handed champagne and offered tray-passed canapés. A scattering of silver spheres floated on the surface of the pool, and the wide black-and-white stripes on the lawn chairs matched the striped canvas curtains and awnings over the house’s many glass doors. Larry and David’s half-indoor, half-outdoor habitation looked like it had been pulled from the background in one of Shag’s ’60s-chic SoCal paintings. 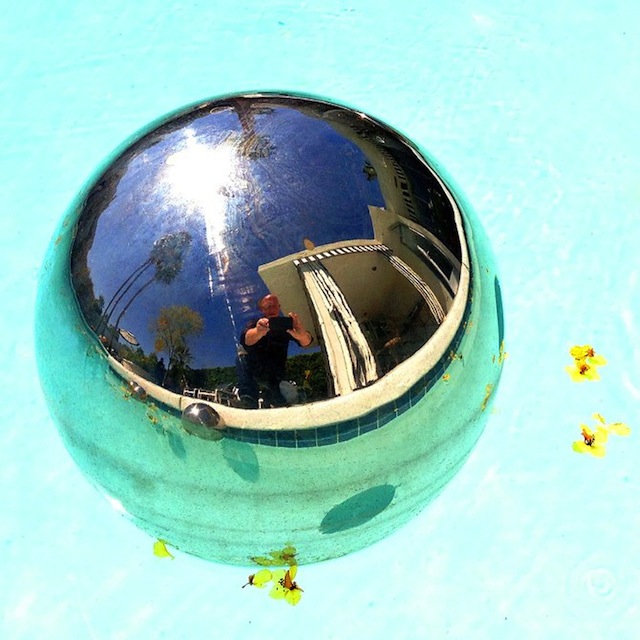 I was educating an elderly lesbian couple about Kahn & Selesnick (a photo art duo also represented by Paul, and whose work David and I have collected) when I met Rob and Bob, who had interjected to say hello to their lady friends. Apparently, Rob and Bob are avid cruisers, and not the “Hey, can I buy you a drink?” kind — they go on boat trips around the world. Rob, a retired Navy captain who’s been just about everywhere, told me which cruise lines he liked and which he didn’t, and then, after I shared my interest in traveling for food and wine, he told me about a river cruise that took him down the Rhone.

The next day, we rose from bed at a leisurely pace. It was already blistering hot when David and I visited the home of a collector who owns one of David’s pieces. As with Larry and David’s place, Scott and Phil’s art-filled abode comprised quintessential mid-century construction and decor, but their pool-filled backyard overlooks a golf course. I smiled inwardly with satisfaction when Scott conferred upon me the equivalent of a gold star for noticing that the Hockney-esque pastel drawing framed on the kitchen wall was a modern-art rendering of his own patio. 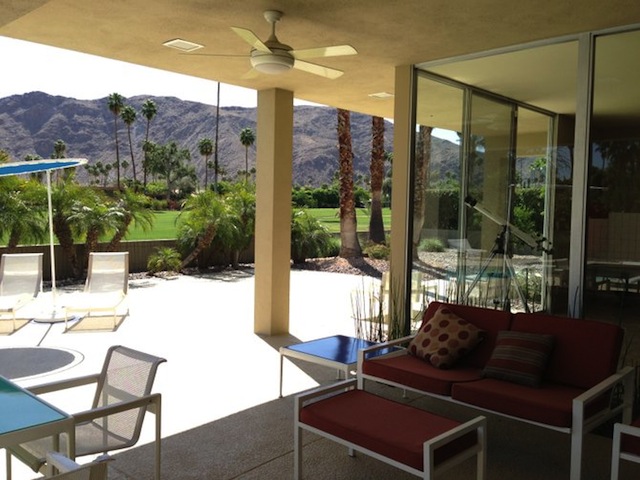 On the drive out of town, we swung by Larry and David’s and found them hanging out in their Jacuzzi. Perfect, I thought, delighted that my perception of Palm Springs had not been dashed. I imagined the possibility that there might be a director hidden among the perfect landscaping, on the lookout for approaching visitors, cuing the homeowners when it’s time to jump in the Jacuzzi.

In addition to our two friends in the bubbling water (which I was shocked to find was heated like a cauldron when the air was like an oven), we found Paul melting into a lounge chair with a cold beer, his girlfriend Rachel draped over him. Three palm trees reflected in the center of their sunglasses, as if they’d been arranged by a set designer.

“I’ve never seen you this relaxed,” I said to Paul.

“I think I finally became a Palm Springs gay last night,” Larry announced with an impish smile. “The green shirt was one thing, but with those turquoise pants…it’s official.” At this we all laughed, and then, as if prompted by a special-effects coordinator, a breeze released hundreds of tiny yellow blooms from the tree above, and they drifted down all around us.