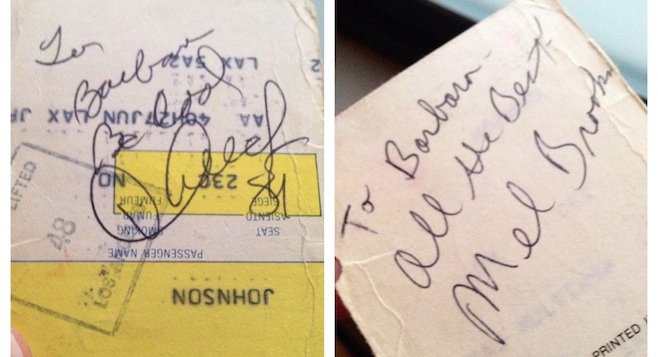 David sighed as I asked him to scoot out of the way a third time so I could remove another drawer from the chest by the bookshelf in the tiny office we share. “Are you sure you still have it?”

“Of course I’m sure,” I said. “I’ve kept track of that thing since I was 12. Over the years, every time I got a new wallet, I transferred all the important stuff from my old wallet, and that boarding pass was always in there, right next to the military dependent I.D. I got when I was 10. I never should have taken it out.”

“I don’t understand why you had to keep it in your wallet,” David said. He redirected his gaze from the computer to give me his full, inquisitive attention. “I mean why carry it with you all the time?”

“Because when things are not in my wallet, I lose them.” I examined the last scrap of paper I’d emptied from the drawer. “Shit. Not here.” I piled papers, pictures, bookmarks, and business cards back into the drawer. “Just one left. It has to be in there. I don’t have many keepsakes, and I know I’d never throw that away. I should have just left it in my wallet.”

The pressure to find the tiny slip of paper was mounting. In a matter of hours, David and I would be hitting the road and heading north to a soirée at Cheech Marin’s house in West Los Angeles, and I was determined to make an impression. The comedian/actor/writer and Chicano art collector was hosting a fundraiser for the Mural Conservancy of Los Angeles, an organization for which he serves as an advisory board member. The traveling exhibition, called Chicanitas: Small Paintings from the Cheech Marin Collection, would be hitting San Diego soon, and I was working to arrange an interview with Cheech about the paintings and the accompanying art book he’d recently released.

That boarding pass, if I ever found it, would give me a compelling reason to approach Mr. Marin, so I wouldn’t have to end up spouting the usual characterless blather I’m used to hearing at such events: “Great art collection. Thanks for all you do to highlight the arts. I’m an insipid person with nothing to say that might set me apart from the rest of these featureless lickspittles. Okay, bye.”

Why would I want to say any of that when I had the chance to strike up a conversation with, “Remember that time you were stuck in a hallway at LAX with Mel Brooks and a handful of other people waiting to get on a plane to JFK?”

I was there, too, along with my sister Heather and her best friend, Molly. It was June 1989. Every summer, my immediate family (parents and three sisters) went back to New York City to visit the rest of the family (grandparents, aunts, uncles, cousins). This was Molly’s first time joining us, and Heather’s first time having a more “grown up” experience of the city. Heather and Molly were mature high school girls, whereas I’d barely just graduated from elementary school.

Nobody remembers why we’d been separated from the rest of the clan, but there we were, just the three of us, standing in a narrow hallway, waiting to board the plane, surrounded by strangers. If we’d had smartphones back then, chances are we wouldn’t have noticed who was standing right in front of us.

“Oh, my God,” Molly whispered to us. “That’s Mel Brooks.” She started to laugh nervously and, soon after, Heather joined in the muffled tittering. The name sounded familiar, and I could swear I saw that guy’s face before, but I was only 12 and didn’t really know who Mel Brooks was. “Oh, my God. He just said something about ‘checking in on Gene,’” Heather whispered. “He must mean Gene Wilder!” That name I knew — I’d seen Willy Wonka and the Chocolate Factory countless times. What I hadn’t known was that Gene Wilder had lost his wife (Gilda Radner) to cancer just a few weeks before.

“We should get his autograph.” I can’t remember who said it. The older girls’ whispers had merged into manic mumblings, while I was busy staring at the old man and trying to pinpoint how I knew his face (I later realized it was from the movie Spaceballs). As the least shy among us, I was volunteered to do the asking. We’d already been checked through for the plane, so I asked Mel Brooks to sign the only scraps of paper we had on hand: our boarding-pass stubs. 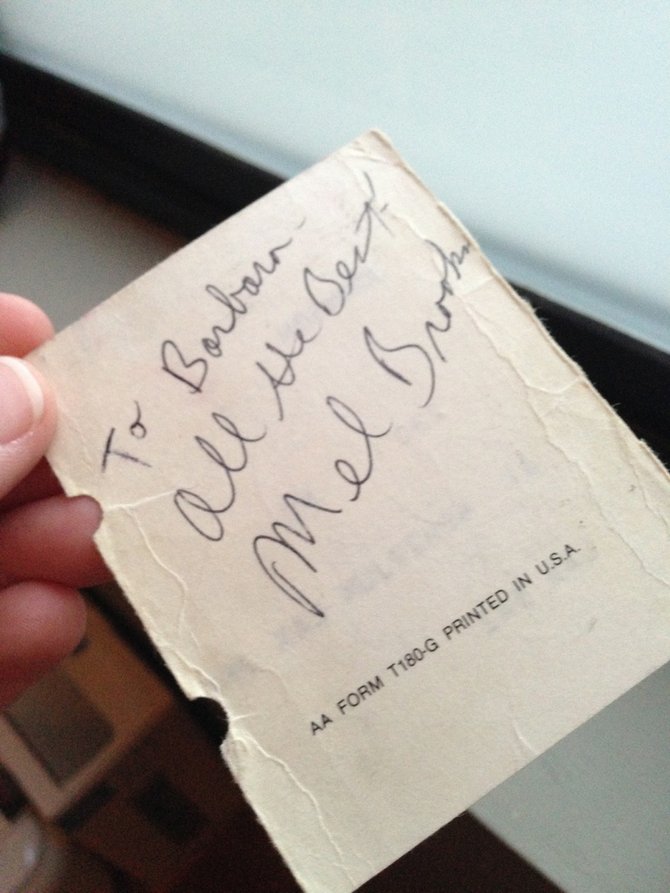 A few moments after Mr. Brooks graciously paused his conversation (with a man we presumed was his bodyguard) to autograph all three boarding passes, I caught sight of a face I recognized immediately. I slapped Heather’s arm and pointed to the man standing a few more people up, carrying a giant purple duffle bag. “That’s Cheech,” I hissed. I didn’t know his last name. I don’t know why I knew who he was (I’m pretty sure I’d never seen a Cheech & Chong flick, though I was aware they existed), but regardless of why I recognized that face, there was no doubt in my mind it was Cheech. 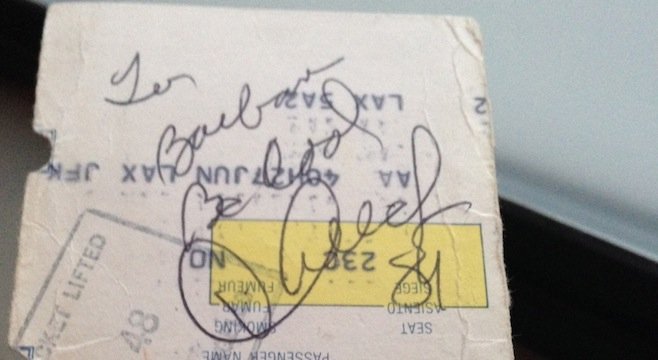 Emboldened by my success in obtaining the last signature, I rushed up to Cheech and said, “Cheech! Will you give us your autograph? We have this — Mel Brooks just signed the other side.”

Heather, Molly, and I were still giddy when we finally got to our seats on the plane. The celebrities were in first class, and we were in row 23. We compared boarding passes. On Molly’s, Cheech had written, “To Molly, High. Cheech.” On mine, he’d written, “Be cool.”

Now, 24 years later, I tried to keep that in mind as I approached the man in his home and held up the stub, which I’d finally found at the bottom of the last drawer, along with my military dependent I.D.

“When I was 12, I found myself waiting in a hallway between you and Mel Brooks. And you were both kind enough to sign the only paper I had on me,” I said. “I brought it, because I thought you might get a kick out of seeing it.”

“Wow. That’s my signature, all right,” Cheech said. “That must’ve been before picture phones!”