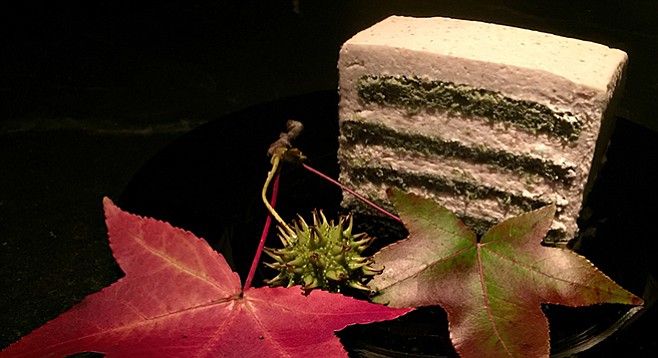 “There, that looks like a good one,” David said. I pulled the car to the curb in front of the sprawling Mission Hills residence. I kept the motor running as David got out, affected a casual manner, and strolled right onto the wealthy stranger’s property. My muscles tensed, my heart raced, and my eyes darted back and forth to make sure we weren’t spotted. This was the closest I’d come to being a criminal accomplice since that one time in high school when I agreed to be the getaway car for a group of girls intent on throwing rolls of toilet paper at the home of another girl they’d deemed annoying.

“Hurry,” I hissed through the passenger window. David acknowledged my concern with a raise of his brows, but then, as if he was trying to exasperate me, he smiled and returned to his mission. I continued to monitor our surroundings, using all the mirrors, while David took his sweet time rummaging through the branches of an innocent tree in some unsuspecting San Diegan’s yard, searching for what he felt was the “perfect combination of autumn leaves.”

I sat in the car wishing I’d stayed home, but I knew if I had, David’s antics would look that much more suspicious. My premonitions were not without merit. At one house, a middle-aged woman emerged to question what the strange man was doing so close to her door. When I saw her, I shut off the engine and bounded out of the car to convey my unthreatening presence. Upon seeing me, the woman relaxed and decided to take the opportunity to both keep an eye on us and let her six-month-old puppy out for a potty break. While I was busy giving belly rubs to the fluffiest little guy in the whole wide world, David explained why he was groping this lady’s tree.

I blamed the chestnuts. Every year, as is the tradition in his family’s numerous Hungarian-helmed kitchens, David embarks on the process of crafting Hungarian chestnut purée from scratch. First he boils them, then he peels them (with two specialized tools he owns just for this task), then he puts all the nut meat in a pot and simmers it with milk until all the milk is absorbed. After that, he mashes the whole mess with a potato masher; to ensure optimum smoothness, he then uses a spoon to press the mixture through a fine wire strainer. This yields a basic chestnut paste, to which he adds sugar syrup and rum. Pressed through a potato ricer onto a dollop of lightly sweetened, vanilla-accented whipped cream, the classic Hungarian presentation is finally achieved.

David considers chestnut purée an “elegant” dessert. Maybe that was the case back in the drab grayness of communist-ruled Hungary, but to my eye, it is not attractive. It basically looks like brown spaghetti on top of a blob of whipped cream. It’s mildly sweet, has a fine granular texture, and is lighter and airier than it looks. I find the flavor to be subtle and unexciting, though I admit it’s nice how the hint of rum complements the earthy sweetness of the nuts. For my man, however, Hungarian chestnut purée is what Christmas tastes like.

Because he couldn’t find them locally, David ended up ordering chestnuts from a farm in Washington. Partly to save on shipping, and partly because he’d spotted a recipe inSaveur magazine for an Umbrian chestnut soup, David ordered the chestnuts in bulk. I learned this when, upon entering the kitchen for a coffee refill one November afternoon, I spotted two giant bags containing ten pounds of chestnuts on our kitchen counter.

With his thumb recently healed but still tender from the previous month’s emergency room–inducing potato-slicing mishap, David grimaced and gasped for three days, burning and pruning his fingers as he shelled hot chestnuts that were fresh out of the oven or boiling water (apparently, if he let them cool, even just a bit, it would have been more difficult to remove the skin).

For the next week, at least one part of every meal David cooked contained chestnuts. He made that chestnut soup from the magazine, which he found underwhelming. He didn’t think it was bad, just that it tasted more like a thick rustic lentil soup than anything chestnut. There was the rich chestnut-chocolate cake he whipped up for a friend’s birthday. And, of course, the chestnut purée. But it was the final dish — the green tea cake with chestnut whipped cream — that landed us in the urban woods.

While I chased the puppy around, David continued to fondle the maple-like leaves of a sweetgum/liquidambar tree and explained his behavior to the curious woman. Because green tea and chestnut are classic autumn flavors in Japan, he told her, he decided to create a full Japanese-themed meal. And, he elucidated, no proper multicourse Japanese meal would be complete without fresh pine needles tied in knots, miniature pinecones, and fall leaves. I cut in to mention that David is an avid amateur cook who loves to “bring it” for any culinary occasion, but that when one of our guests is a professional chef he pulls out the stops. On this evening, we were having our friends Gary and Logan (of Cellar Door and Native Spirits) over for dinner. David found his treasure and retrieved kitchen shears from the trunk, along with the plastic container lined with damp paper towels he’d prepared to preserve his findings. He then described the entire meal, from the chawanmushi (a silky, sensuous custard soup), and tonkatsu (panko-coated, fried pork cutlets served atop Napa cabbage with katsu sauce), to the green tea and chestnut cake.

On occasion, a friend will ask if David has ever considered opening his own restaurant. “Being a professional chef is an unbelieveable amount of work — I don’t want to have to work that hard,” is his canned response. But I wonder if it’s the work itself so much as David’s unwillingness to compromise on his version of perfection.

“No,” David insists. “It’s just that I really enjoy my little experiments and tailoring each meal to our specific guests. I worry that if I ever tried to do it professionally it would just become work, and then making chestnut purée wouldn’t be special anymore. Christmas wouldn’t be special if we celebrated it every day of the year.”