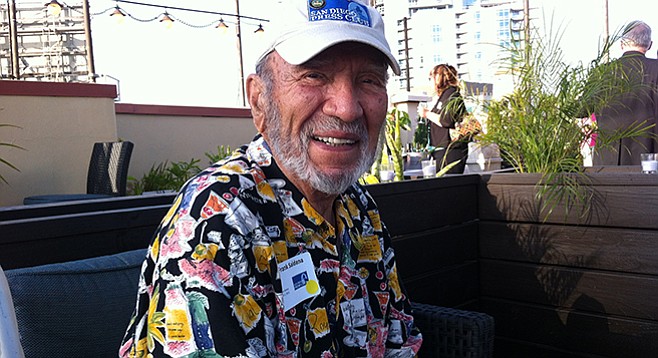 There was so much familiarity in the old lady’s eyes that when she moved toward me, my arms instinctively opened in anticipation of a hug, but her arms remained at her side. “You’re Barbarella, right?” I nodded. “I’m Rosemary.” She looked me up and down, taking in my red-streaked, dark brown hair, my salmon-colored T-shirt, black pants, and flat sandals, and said, “You look exactly as you should.” I took this as a compliment and noticed I felt more comfortable in my skin than I had a moment before.

“Haven’t we met before?” I asked as we shook hands.

“No, I’m pretty sure we haven’t, but I know who you are — I’ve been reading the Readerfor over 30 years now,” she said. Since she was still talking to me, even smiling, I concluded she didn’t hate the last 11 years’ worth of issues that have included my stories. “And you must be David,” she said to the man behind me who was, in fact, David.

She introduced us to her husband, who, with apparent difficulty, stood to greet us, and then settled into a standing position, balanced between his cane and the column beside him. There was a quality to his eyes that drew me to him, a keen vitality that didn’t match his otherwise doddering exterior. David and Rosemary went to track down a particular treat from one of the trays being passed around at the garden party, but I opted to stay and talk to this man.

It was only recently that I stopped seeing senior citizens as a different species. When I was 25, 40 seemed ancient. I may not yet be 40, but the older I get, the less “old” my elders seem. Instead of wishing octogenarians would keep their potentially antiquated notions to themselves, I have a sudden and unquenchable thirst for their opinions, a hankering for every detail they can remember of their personal past.

Too often I had dismissed those who appeared to be feeble. It’s tempting to turn a blind eye to the senescence that reminds us of our own mortality. But the more seniors I befriend, the less noticeable their geriatric characteristics become, and the more I learn from hearing about their experiences in their own words, experiences that span my lifetime twice over.

I recently attended a memorial for a fellow San Diego Press Club board member, Frank Saldana. He was 84 years old when I first met him, 87 when he died. I knew he was a retired Marine and that he’d worked for the U-T in some capacity. Mostly, my knowledge of him began and ended with the fact that he was always smiling in a way that made him look like he had just learned a great big secret and couldn’t wait until the rest of us silly humans figured it out.

It wasn’t until his memorial that I learned how much Frank loved to dance. How he’d delighted everyone by never failing to dye his beard green on St. Patrick’s Day. As close friends and family members tearfully remembered him, I also learned that Frank was the first reporter at the scene of that horrific PSA plane crash in 1978, the one I grew up hearing about. He won a Pulitzer Prize for his reporting. How had I not known that? I thought of all the lost opportunities, of every event at which I sat beside him, unaware of the answers he could provide if I’d only known to ask.

And here I was, with another elderly gent, this one requiring the slightest prompt — a comment about the weather — to share what was on his mind. He spoke of his grandfather’s farm in Michigan, how he’d grown up without electricity and didn’t see a television until he was in his 20s. He mentioned how his grandfather got the land in 1890, thanks to the Homestead Act. I marveled at my sudden proximity to a person who had been directly affected by a law whose details I could vaguely recall memorizing for a test long forgotten.

He told me about his son, who, after struggling with a terminal illness, finally succumbed to the disease the year before. “I’m so sorry,” I said.

“I’m not,” he responded. Then he explained how grateful he was for the seven years of quality time he got to spend with his son while he was sick. “He would have been working all that time, and I might never have gotten to connect with him like that.” He broke his gaze with me for a moment to look off at something or nothing over my shoulder, his eyes rheumy, his mouth forming a melancholy smile.

I once thought “old people” couldn’t possibly relate to me. That my parents were incapable of understanding my adolescent angst, that my grandparents were even less able to fathom what it was like to be young, with a young person’s problems. When I look back at my younger self, I think, Oh, the things I could have told you, kid. The pain I could have spared you. But I know I would never have listened. I knew all grownups saw my problems as tiny things in their great big world. Only later, when my own world grew larger, did I realize that a child’s world is small, making everything in it so much more monumental when seen from within. But from the outside, it’s so little, so manageable.

This awareness makes me extra attentive not only to my elders, whose lessons I wish to learn, but also to my niephlings, as they approach teendom. Perhaps I can serve as a liaison between generations, breaking sage counsel into bites that are as digestible as they are applicable. Perhaps, unlike me, they’ll listen, and not regret, as I do, that I didn’t arrive at this point sooner.