This past weekend, David and I went to Seattle to celebrate David’s great-uncle Béla’s 90th birthday. And though our weekend was infused with family (some I’d met before, but most I hadn’t), we also spent some timing tasting a bit of what Seattle has to offer (which, we’d learned from our research, was vast). We make fun of Seattle for its stereotypes, but deep down, both David and I love the city of hippies, books, and coffee. Still, I couldn’t help but snap shots of the obvious Seattle-ites waiting at the gate with us. 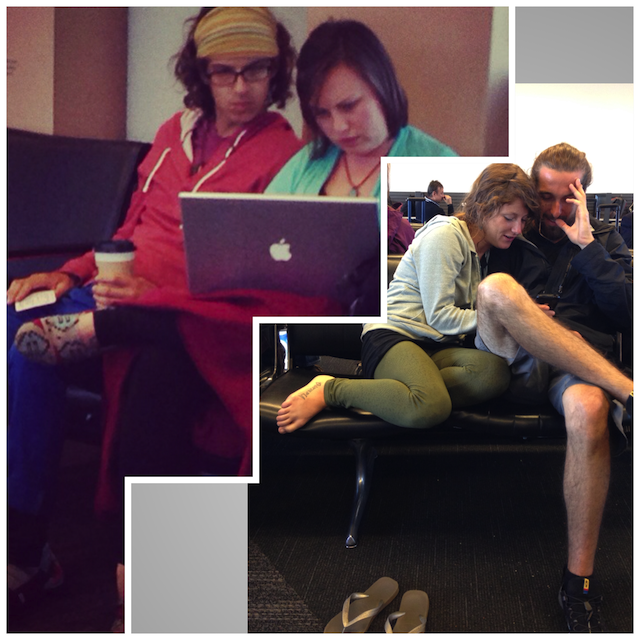 Two couples at the gate to Seattle.

We stayed at the Fairmont Olympic, because we’re super fancy. Actually, we did that online room bidding thing, and we’d been rooting for Hotel 1000, where we’ve stayed before, but apparently because Fairmont dropped half a star, it ended up in the same category and our scheme to out-think the bidding software was a failure. It was five years ago (WOW, FIVE) that I made this video which features a glimpse of the awesome ceiling faucet over tub in our room at Hotel 1000.

In the video, I say that Shade in Manhattan Beach was our favorite hotel, but since then, we’ve stayed at both Marques de Riscal in Rioja, Spain, and Gaige House in Napa, and both of those far surpass any of the others. Well, except for that hot tub room in Hakone, Japan. That would make the top three. I’d post a video from Marques de Riscal, but that would be quite the digression from a Seattle blog… Ah, fuck it, here it is:

Okay, where was I? Right, Seattle! It wasn’t our top pick, but we liked Fairmont. They had a super fancy staircase in their main lobby.

And on our last day there, we enjoyed a ridiculously fancy but fabulous breakfast in their giant dining hall. Our first day in town, we checked in, cleaned ourselves up, then went down to the hotel’s lounge for a cocktail prior to meeting up with David’s mother (who was visiting from Martha’s Vineyard) and his sister (who lives in Seattle). 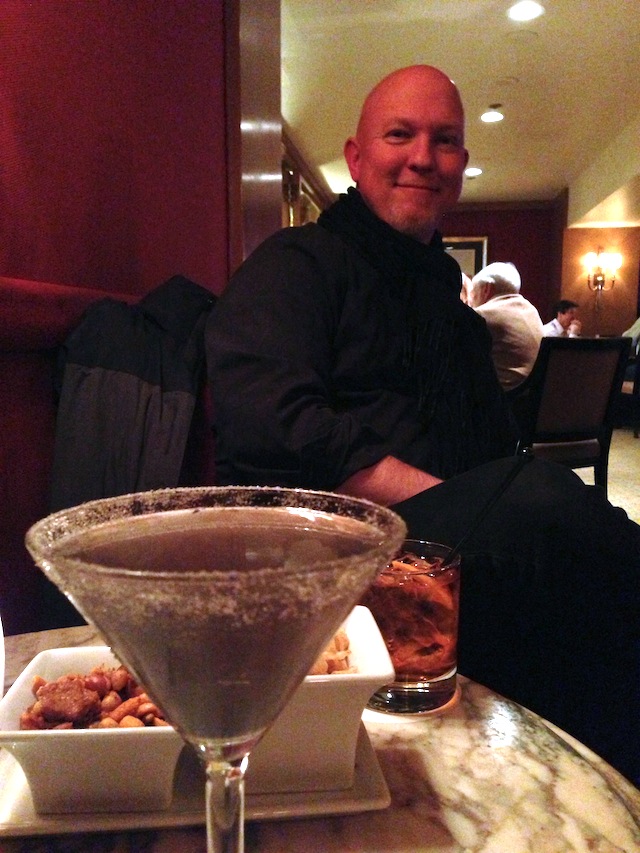 David in the lounge, with my lavender martini in the foreground. 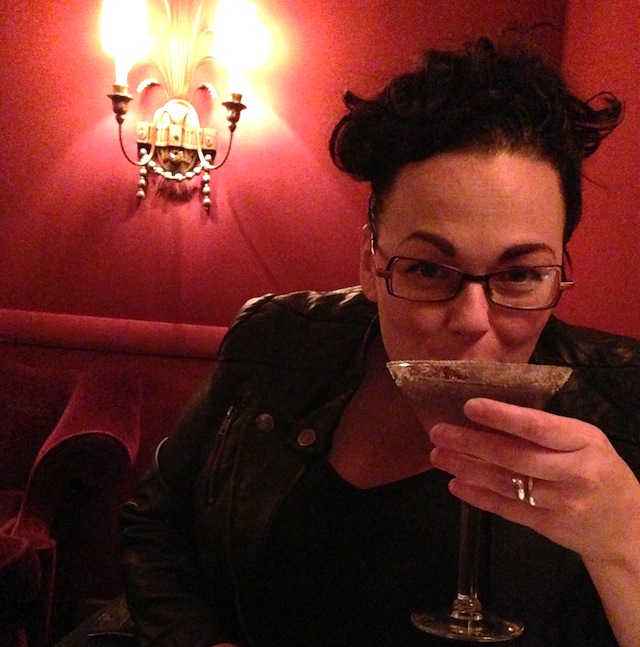 Me, sipping on that martini & promptly getting drunk due to an empty stomach.

Our first meal, at Restaurant Zoe, was so excellent that David and I ended up going back the following night (intentionally avoiding all of the food at the celebration so we’d have a sufficient appetite). Here’s a shot of the super-Seattle-hip (and talented) chefs at Zoe. 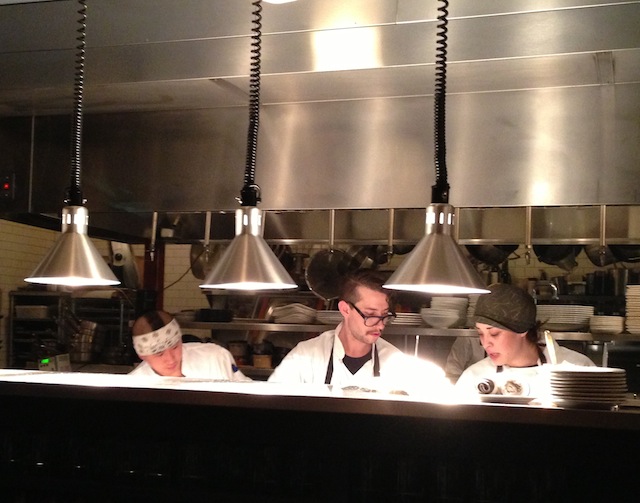 Cooks in the kitchen at Restaurant Zoe.

David asked several people to get the chef to email him the recipe for that chestnut soup we had both nights. So far, no luck.

The next day was the official birthday celebration. Here are some family shots so you can get a glimpse of this side of my man’s family: 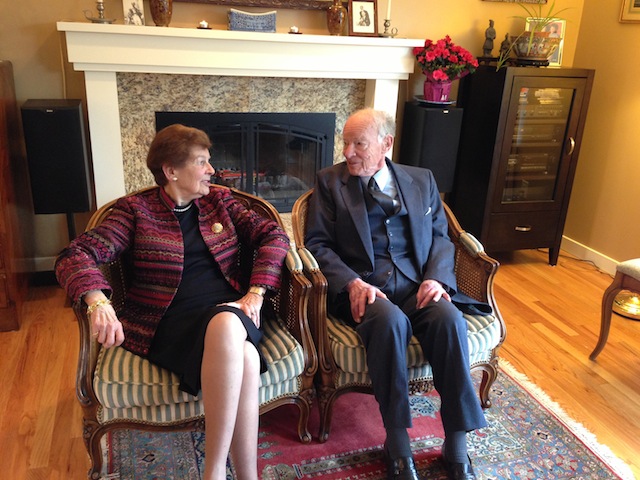 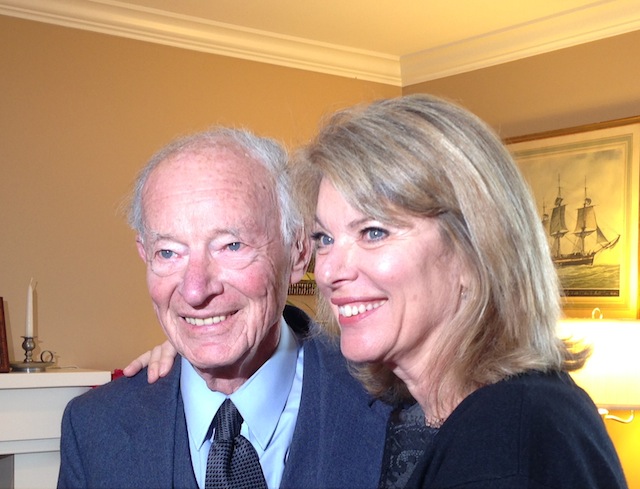 I love to mess with my sister-in-law, Michelle. She’s the real deal when it comes to Seattle hippies. Love, peace, art, and a genuine heart, through and through. Even her laugh is as natural as the granola she probably eats. 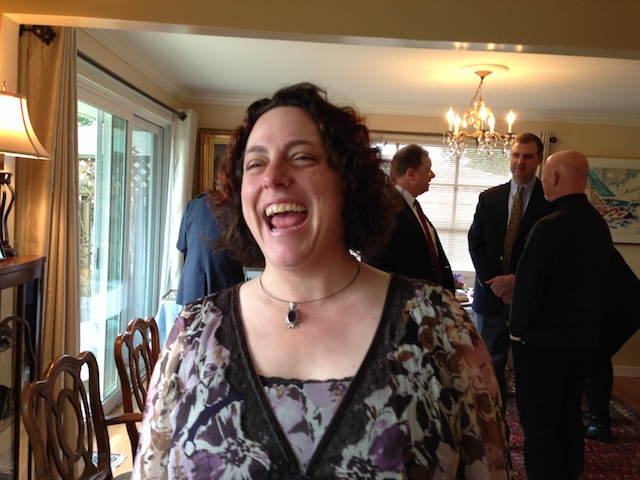 I’m convinced Michelle sees me for the cynical bitch that I am. She is most certainly the yin to my yang.

While we enjoyed two dinners at Restaurant Zoe (and one at Bela’s home — a delicious French/Hungarian dish courtesy of Muriel, who lives in Geneva, Switzerland), for lunch David and I found an excellent spot two doors down from the entrance of our hotel: Purple Cafe and Wine Bar.

I loved that their lunch option included a section called “A bit of this… A bit of that.” I was able to taste tomato soup (which was just so-so), a pepper/goat cheese salad (which was delicious) and a margherita pizzette (also drool-inducing).

Lunch at Purple Cafe, with wine flights, of course.

The next day, I was all about the wine. Purple has an extensive collection, but my favorite part about their selection was the opportunity it gave me to learn just how much I like Washington wines. I had no idea. That’s the trouble with living so close to California wine regions, I get stuck on Paso Robles and Russian River, and completely overlook Walla Walla (such as Watermill’s cabernet sauvignon). 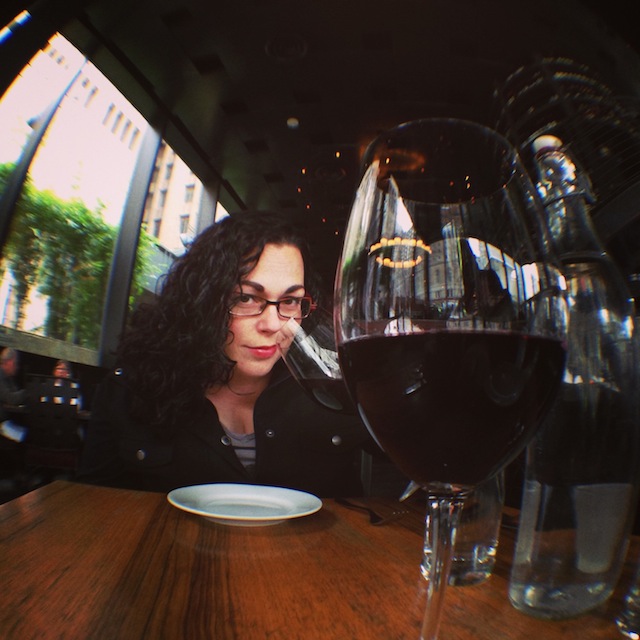 Me, enjoying the Watermill Cab.

I’m not going to bore you with all the family stuff (family stuff is only interesting to family, but I do have a column coming out next week about one particular family interaction that is not boring, but cringe-worthy in a funny way). It was a great visit, I met a bunch of new cousins who I’m happy to have added on Facebook (because I like to stalk people), and David and I had a good time, both with the family and by ourselves. Not much else to say, so I’ll leave you with this picture of a building in Seattle. I’m just not quite sure how it’s able to stand. Oh, Seattle. You guys. 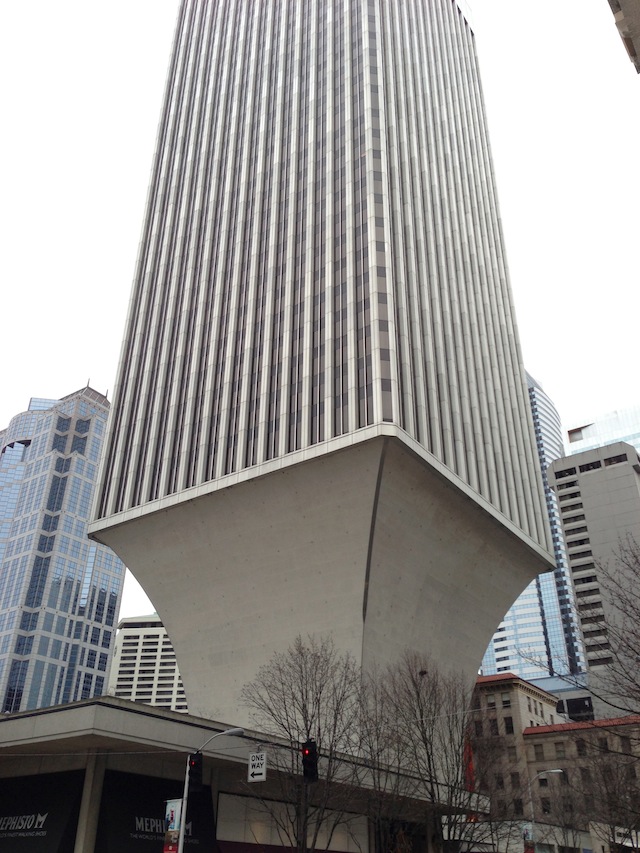