Top of the Food Chain: Fine Dining at Eddie V’s 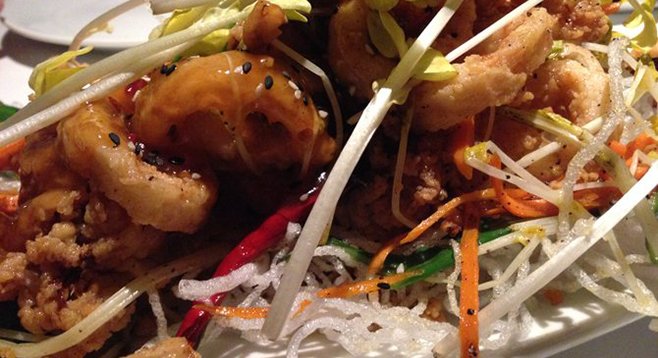 I wouldn’t have expected top-notch fine dining from a mammoth national organization like Darden (which owns 2100 restaurants, including Olive Garden), but because my fancy foodie friends Bill and Jane approved of and recommended it, I knew Eddie V’s Prime Seafood had to be in a different class of chain restaurants.

David and I have been spending a bunch of time down at the Headquarters at Seaport District, an easy-to-navigate “open-air lifestyle center” that is home to cute boutique shops and renowned fine fare such as Venissimo cheese.

On this particular evening, David and I made reservations at the restaurant because prior to dinner, we were planning to be at an art show next door at preFAB, to see a painting series by Matt Stallingsand Terri Beth Mitchell called the Human Head Collection (fun fact, one of the paintings was a portrait Terri painted of me, with a little David in the palm of my hand). But back to the restaurant. Live jazz was being played in the bar area, but we were seated upstairs, at a pleasantly quiet table in the corner. I noted that every time I said, “Thank you” — for bringing us menus, for refilling water, for pouring the wine — our server responded automatically with, “My pleasure.” That’s right out of the five-star hotel playbook. From beginning to end the service was nothing short of obsequious, but it never felt pandering. We were pleased to soon find that the food was just as deluxe as the service.

This bread and butter is delicious

We began with calamari, a spicy and delicious Kung Pao-style preparation with roasted cashews that magically maintained their heat.

Next we shared the crab and corn chowder, a silky, succulent soup that hit every note on our taste buds, resulting in an orchestra of pleasure on our tongues. Sweet corn, salty smoked bacon, a rich blend of yum.

Crab and corn chowder, a must try

While we were still moaning over the chowder (and the crusty-on-the-outside, moist-on-the-inside fresh bread served alongside fresh butter that was topped with Hawaiian red salt and chives), steak was served to the table beside us. I watched as the servers went around the table with a flashlight to confirm that the meat had been cooked to each diner’s requested preference. Then, rather than placing the side dishes in the center of the table, servers asked each person which sides they would like, and distributed spoonfuls of veggies, potatoes, and whatever else they ordered directly onto their plates.

A fantastic preparation of halibut

The place is most known for seafood, so David and I opted for fish over steak. I got the Alaskan halibut, which was sautéed with sweet corn, morels, edamame, and pork shank. As with the soup, each flavor stood out but did not compete with the others. The pork was lightly salty and so lean in texture it was difficult to distinguish the pork pieces from the morels. My fish was a little overcooked, but I decided not to bother with sending it back and instead accepted the unfortunate texture (particularly around the outside) and concentrated on all those glorious flavors.

David ordered Chilean sea bass “Hong Kong” style, which was a much simpler preparation than my halibut. The sea bass was steamed in a miso broth, and set atop wilted spinach. Both cuts of fish were thick and lovely.

As we’d expect from market-priced fish, fine wine, and excellent service, the tab was not cheap (around $250 including tax and tip). But it was romantic and luxurious, and we left with no regrets. The entire evening, and how we felt about it, is best summed up by the words I found when I went to check out Eddie V’s web site: “Man cannot live by music, wine, and fine dining alone. But it’s worth exploring. Here’s to living it up.”

I’ll drink to that.