The nice side of naughty 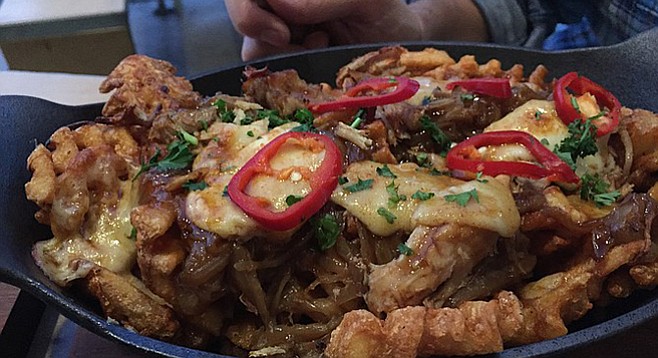 I lost count of how many friends, aware of my proclivity for kink, told me I just had to go to S&M Sausage & Meat. I don’t think being a dominatrix gives anyone authority to determine the value of a restaurant that happens to have a playfully kinky name, but being a food writer does, so here I go. I love this place. Even with its confusing service (sometimes four people are at your table when you don’t need anything, then no one’s around when you do), S&M has quickly jumped to my top-of-mind spots for meeting up with friends for craft cocktails and sharable snacks. The bartenders and servers are extraordinarily friendly. On my first visit, I was treated like a regular, by which I mean the smiles were warm and familiar, the attitudes were all accommodating. I went expecting a meat-centric restaurant that serves alcohol, but after tasting a few concoctions, my perception of S&M morphed into that of a craft cocktail bar that serves food. My two favorites, each $11, are the Variety of Life (gin, honey, lemon, Sriracha), and the Devil’s Holiday (rye, tobacco, cherry liqueur, chocolate bitters).

The Variety of Life is for when I’m in the mood for something crisp and refreshing with a bit of a kick (I ask for extra kick), and the magically balanced, rich and smooth Devil’s Holiday satisfies my desire for deep, complex flavors that are harmoniously blended.

The best time to enjoy a cocktail is during happy hour, when every drink is not only $2 off, it also comes with a big strip of your choice of specialty bacon. Our favorites are the hickory and honey Sriracha.

To highlight the fine booze on offer, S&M has begun a tasting dinner series. Each quarter, they plan to feature one spirit to pair with a multi-course meal.

I attended the first one, which featured bourbon. The next one, featuring scotch, is scheduled for April 29. The bourbon dinner was fun, and with four generous pours of fine bourbon plus a cocktail greeting at the door, I think it was a fair value at $75. My one complaint was that it was nearly impossible to hear the speaker (he ended up going table to table; some kind of PA system would help immensely).

In addition to the bourbon tasting dinner, David and I have been to S&M a handful of times in the past few weeks; here are some of our favorite noshes so far. First up are the Pork Wings, which are actually pork shanks ($7.5). These succulent but lean braised bites are served with your choice of root beer balsamic or Carolina BBQ sauce. We’re all about the root beer balsamic, which adds a rich sweetness to the savory braised meat.

It’s not sausage or meat, but for a satisfying dose of carbs, try the Soft Pretzel Bites ($6). These puffy, chewy balls are served with house-made marinara and a whiskey mustard aioli.

I should mention, as the restaurant is named for it after all, that the sausage is indeed tasty. My favorite so far was a house-made bourbon sausage with blue cheese. David’s partial to the spicy (very spicy) kangaroo. Only once did we order sausage on a roll. The bread was crumbly and unremarkable. The accoutrements that come with the sausage boards (two sausages of your choice with flavorful fixings such as pickled onions and sauerkraut, $16) more than make up for the lack of bun.

Not the sexiest shot, but definitely one of the tastiest sausages (bourbon & blue cheese)

One of the most interesting bites I’ve had contained no meat at all. The Coconut Not “Mac N’ Cheese” ($7) is an inventive little dish comprising spaetzel, coconut milk, toasted coconut, and broccolini. My brain was confused at first, but after a few bites, I adjusted. Lightly creamy, somewhat nutty, and at times almost sweet, it was like a not-as-rich or oily mac n’ cheese, without the cheese.

Not Mac n’ Cheese, among the vegetarian items on the menu

On one visit, a friend ordered the Rabbit Poutine ($15), with pickled jalapeno, spicy cheese curds, waffle fries, caramelized onions, and shredded rabbit meat. This dish is found under the “Medium Bites” portion of the menu, but it was large enough for three of us to share, with some left over. Lots of flavors, all of them rich — this dish is addictive.

Churro Chicharones, for the salty-sweet tooth.

I don’t care much for pork rinds, so I was skeptical about the Churro Chicharrone ($7) dessert. Here the savory, puffed, and crispy fried pork rinds are coated in cinnamon and sugar and served on a bed of Nutella, along with freshly whipped cream. It’s a gigantic portion, and the rinds — though delectable — are filling, so only order this if you’re nuts for the stuff or with a large group