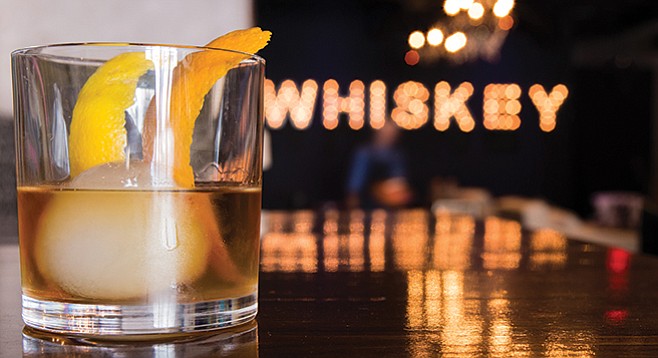 In my 20s, whiskey sounded like an old-person’s drink — a sophisticated liquid imbibed mostly by men in suits who took it in the form of a two-finger pour in a short and wide glass tumbler, or men in rags, who, by necessity, drank it straight from a paper-bag-covered bottle. On my dainty tongue, the umber fluid was harsh and burn-y, like swallowing a tube of fire spiked with knives.

But, in my 30s, as my palate matured, I developed an appreciation for bolder, stronger flavors, such as unsweetened espresso. I was no longer that girl who preferred to get tipsy on what I now realized was the equivalent of spiked dessert. I was a grown woman; I had learned that — as with the many variations of wine I had come to enjoy — not all whiskeys were the same.

Whiskey comprises scotch, bourbon, rye, and countless variations along the distilled-grain spectrum. The peaty quality of scotch is not to my taste — every time I try it I am startled, in a bad way. Like being slapped in the face by my chain-smoking aunt. Whereas scotch is the cousin, bourbon and rye are more like siblings (bourbon is made with at least 51% corn, the other with at least 51% rye). Bourbon can be brassy, but is mostly sweet with a bite, a quality I’ve come to like. But my favorite whiskey of late is rye, the nucleus of cocktail classics such as the Sazerac and Manhattan. And many bartenders in town are with me.

“I’m into rye right now because of its bitterness and caramel afternotes,” says Tony Roehr, who bartends at Starlite. “Sometimes bourbon just doesn’t stand out, and I want that punch in the mouth.” Tony makes me an off-menu concoction of his own, with Rittenhouse Rye, Benedictine, Averna, and a splash of walnut bitters. It’s as well balanced as a night out with a select group of friends. “The various bitter flavors, together, kind of cancel each other out to create the balance,” he explains.

Within walking distance from Starlite is the Aero Club, which now boasts 950 varieties of whiskey. Their cocktails are basic, but with all those bottles to choose from, it’s better to sip the stuff straight.

For my taste, the perfect rye to sip by its lonesome, with or without one of those fancy ice cubes, is the luscious and smooth Angel’s Envy. Something about the process (it’s finished in rum barrels that used to be French cognac barrels) magically imbues the elixir with a creamy maple finish. At home I enjoy a splash of Angel’s Envy rye in a tumbler, like one of those suited men I imagined years ago, When I’m out, I like it a little more dolled up. The Old Fashioned at the Whiskey House features Angel’s Envy Rye with a bit of Angostura bitters and La Perruche sugar.

It’s easy to think of rye — with its spicy notes and big body — as a winter drink. But here in the land of the Endless Summer, lighter, citrusy versions are showing up on menus.Solace and the Moonlight Lounge serves a refreshing, summery rye-based drink called Lucky Peach, with peach purée, lemonade, and crushed basil, mint, and cucumber. At Starlite, Tony makes a delectable version of the Final Ward (notable mixologist Phil Ward’s rye spin on the gin-based classic, Last Word). The Last Word calls for Green Chartreuse, but Tony uses yellow, which is lighter and sweeter.

“I think rye is an under-utilized spirit,” says Nick Messina ofSycamore Den. Nick’s invention, the Harlequin Hootch, is along the lines of another of my local favorites, Sausage and Meat’s Devil’s Holiday. The Devil’s Holiday, with tobacco and chocolate, is complex and on the sweet side. Though not as rich, the Harlequin Hootch is just as nuanced. The biscotti liqueur brings out the rye’s cereal notes, and the bite is detectable enough to be exciting, but not so harsh as to offend. As Nick puts it, “Faretti [biscotti] paired with black walnut was a phenomenal combination, and the Dickel Rye had the perfect body, nose, and heat to stand up to it.”

When I see Wild Turkey, I think of the paper-bag variety of whiskey. But the lower proof, more dulcet version is the rye of choice at Seven Grand. A bartender named Jay mixed me up an off-menu New Orleans classic, De La Louisiane, using Wild Turkey 81. It was surprisingly smooth.

A popular trend among mixologists is to barrel-age premixed cocktails. The additional aging serves rye-based libations especially well. There’s a zesty barrel-aged Manhattan at Counterpoint (830 25th Street, Golden Hill) and a barrel-aged Boulevardier at Solare. Tommy Smerik, the mixologist behind this Boulevardier, says, “I’ve been playing with rye lately. Traditionally this drink would call for a bourbon, but rye just felt right.” It’s on the bitter side, with Bulleit rye, Scrappy’s bitters, Amaro Montenegro, Punt e Mes vermouth, Gran Classico, and a splash of Campari.

I’m always on the lookout for new ways to enjoy this old drink — so old even George Washington distilled the stuff. Nick describes his favorite rye, Rittenhouse, as “aggressive, sharp, and hot.” When I hear the many other adjectives surrounding rye, such as “spicy, sweet, and round,” I can’t help but wonder if the reason I like it so much is because it reminds me of myself as I approach my 40s.