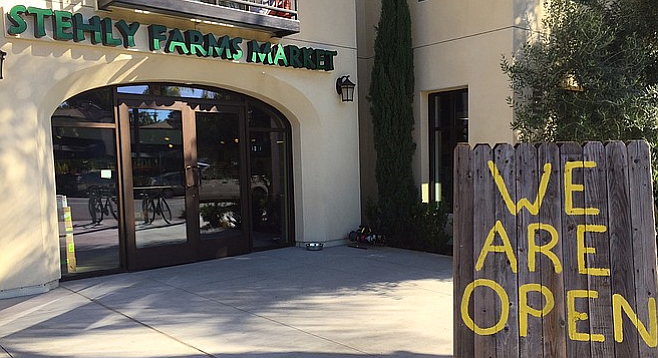 Stehly Farms Market opened its doors to the public on Friday. Kensington-area residents have been eagerly awaiting this day, as it took nearly a year longer than expected for interior construction to be completed in this space in the newKensington Commons complex that went up last year.

Not everything is completely finished — some lights are being installed, and electricity needs to make it to a wall in the deli area to power the slicer — but the shelves are fully stocked, and the staff is buzzing around.

Pick some produce, any produce

Chef Craig Madden, previously at Haven Pizzeria andBernard’O Restaurant, is smoking his own ham, turkey, bacon, and cheese and is responsible for overseeing all of the prepared-food items. I failed to take a picture of the veggie wrap I just enjoyed for brunch: inside the spinach tortilla were fresh red peppers, a citrus-y avocado spread, greens, and chickpeas. The peppers were fresh and crisp, the tortilla and chickpeas were nicely chewy, and something in there had a pleasant bite. I’m assuming one of the peppers had a little kick.

Fruits and vegetables waiting to be taken home

Just about everything is stamped “organic” here. I was hoping for more gourmet over organic. I had been imagining a little corner market in South Park that seemed to fall off a Parisian truck, with its fresh breads, wine, and cheeses. Fortunately, between the kombucha and juice bar (oh, right, the juice bar is a thing— there’s a menu and everything — but I like to chew my veggies), there are some freshly baked goods. I can vouch for the chocolate chip cookies. Soon there will be pies and specialized cakes to order.

I’m particularly excited about the cheese and olive bar, as my man and I like to entertain with lavish cheese boards. There are also some other staples and sundries such as toilet paper, environmentally friendly house cleaners, milk and eggs, dairy-free dairy, gluten-free bread, a selection of pastas and sauces, and the healthy, organic version of just about anything else you’d expect to find in a grocery store. As at Whole Foods, there are tables and chairs outside for people to enjoy their salads or deli sandwiches with sides on site.

I met the Stehly brothers, Noel and Jerome, who were overseeing the last-minute things that need to be taken care of, such as those lights. They’re third-generation farmers, with a focus on growing avocado and citrus at their farm in North County. They partnered with other local farms to stock the shelves, although the avocados are from Mexico (I was told they’re not in season here until the summer). The Stehlys are planning to open another market in Carlsbad in about a year.