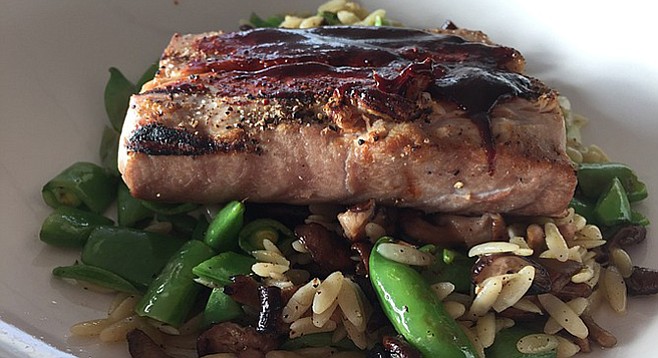 I’d only ever been to Pacifica Del Mar around sunset, most often with reservations so I could be sure to sit at one of the primo tables that are cleverly arranged so diners are half-facing each other, and half-facing the spanning view of the ocean through a thick pane of wind-blocking glass. It seemed odd when David and I arrived at lunchtime and found ourselves asking for a seat that was farther from the view so as to shield our heads from the sun overhead, but once seated, we could still feel the ocean breeze and see enough of the horizon to be content.

I was dismayed when I realized the lunch menu substituted sandwiches for most of the entrees available at dinner (I’d gone craving their sea bass dish with soy glaze, sticky rice, bok choy, and green curry sauce). But relief overtook me when I spotted my other favorite, the calamari, so we decided to do starters and cocktails while figuring out the rest.

The calamari ($14) contains similarly crispy cherry peppers that add a kick of spice and vinegar. Along with the Vietnamese dipping sauce and red pepper aioli, this is one of my all-time favorite versions of the classic appetizer. David ordered the Japanese clam chowder ($7). I’m not a clam-lover and I wasn’t feeling particularly adventurous, so I didn’t go in for a bite, but David made it clear that he enjoyed this shiitake mushroom, water chestnut and scallion version, which is a diversion from his favorite New England style.

We received the drink menu on an iPad. At first, this seemed modern and hip, but after David and I passed the clunky thing back and forth over our glasses (it was strangely heavy, I imagined there were extra battery packs in the case), and after tapping back to the main menu repeatedly to get to another section of drinks, and then scrolling up and down (you could only view four drink options at a time), I longed for a one-sheet that simply listed all available drinks, sans the giant and unnecessary color photos.

Both of our cocktails were a little on the sweet side for our tastes. Had the bartender dialed back the sugar, and added a pinch more booze, I would have ordered seconds. We expected the Strawberry-Balsamic cocktail ($11) to be sort of girly, with vodka and muddled strawberry, so the hint of excessive sweetness, slightly tampered by the balsamic, wasn’t egregious. About the vodka: Pacifica Del Mar’s Ocean Bar features more than 200 kinds. They’ve chosen to highlight a spirit that is eschewed by a number of the city’s most sophisticated craft cocktail bars, mostly for its lack of flavor. I can only surmise that fruity and frilly is de rigueur in Del Mar.

When I veered away from vodka, I was disappointed to not be able to taste the Hendrick’s gin in my Cucumber Rosemary martini ($10). I didn’t really taste the cucumber either. Mostly what I tasted was simple syrup and a bit of the rosemary needles that were floating around in the glass. There was a time (my early twenties) when this innocuous concoction would have been right up my alley, but just past my mid-thirties on a sunny Saturday afternoon, I was hoping for the refreshing crispness I’d come to associate with cucumber and gin.

Things turned around when we received our main dishes. Our server was beyond helpful, taking extra time to go through the menu with us, especially when he realized how distraught I was over missing out on the sea bass. I took his recommendation and ordered the angel hair pasta with rock shrimp, artichokes, chili flakes, and spinach ($14). I had been reluctant about the pesto, but our friendly server insisted it was a light, un-oily version, and he was right. The dish overall was teeming with flavors and textures as deliciously distinct as they were compatible with each other. Because I had quickly filled up on calamari, I ended up taking half of the angel hair home, and it was just as toothsome reheated. Let’s put it this way: I enjoyed the angel hair with rock shrimp so much, that upon my first bite, I stopped missing the sea bass and made a mental note to order this dish again on my next visit.

David was just as happy with his grilled local yellowtail ($19), with chile de árbol BBQ sauce, sugar snap peas, more of those shiitake mushrooms, orzo, and spring onion-yogurt sauce. The peas were fresh and crunchy, the orzo a nice al dente, and the tasty sauce did not overwhelm the delicacy of the fish.

Pacifica Del Mar is a pricey place, but their food and service is up to par. On the drink front, now that I realize it’s not my kind of cocktail scene, I’ve made a mental note to go for the wine list the next time David and I decide to splurge.