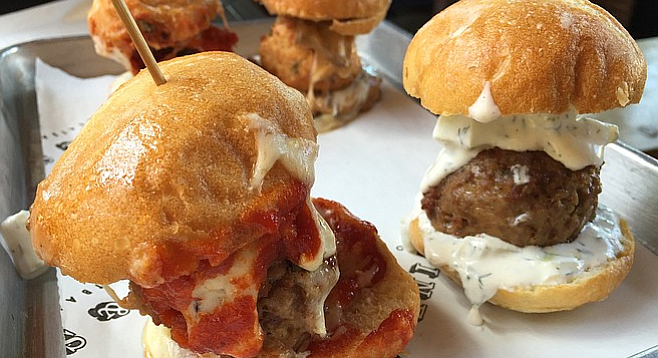 I’d tasted the fare at Soda & Swine several times before, but I’d never actually been in the space. I was always next door, enjoying a libation at Polite Provisions while David, ever the giver, would trek over to the restaurant, wait in line, and order, after which a server would deliver the food to our table in the bar. The food had always been an afterthought, something to nibble on while drinking — a reason to stay put rather than change venues in search of dinner after happy hour. I’m pretty sure this is the first time I tasted the food while sober, too. But it was just as tasty and gratifying as it was when I was hungry and buzzed. It was the middle of the day this time, certainly no time to be drinking. At least that’s what I thought before I spotted “champagne slushie” on the menu, which turned out to be the best Slurpie ever. I got the raspberry version with vermouth, cava, lemon, raspberry, and bitters. It was refreshing and relaxing.

I hadn’t realized before that the restaurant is all outdoors. Sure, there was shade, but between the big wooden slats overhead there was nothing to separate us from the sky above, a lovely reminder that we live in San Diego, where the weather is nearly always perfect and dining al fresco is always an option.

It was stupid of us to order the broccolini ($4). I love all kinds of broccoli, I even snack on it raw, but in a place that specializes in meatballs it’s just not that appealing. If there was nothing else on the table, this broccolini (flavored with garlic, lemon, and parmesan) would have been way more scrumptious. But set beside hot and steamy sliders and a lump of fried polenta covered in cheese, it was barely noticeable.

Of the sliders, my favorites were just as good as I remembered. I get the classic Bovine (beef with marinara and mozzarella) and the Lamb Slider (with tzaziki), which is not on the menu but sometimes written on the board. David wanted to go double pig with the Swine (smoked pork with chipotle BBQ and pepper jack cheese) and the Hog (chorizo with chipotle BBQ and mozzarella), but I talked him into substituting one of those for the Hen (chicken with mushroom cream and provolone).

We also got the Crispy Polenta with burrata and spicy tomato sauce ($5), which we quickly devoured. David dipped the broccolini in the sauce.