Following in the footsteps of their Little Italy predecessors, when Bencotto Italian Kitchen owners (Chef Fabrizio Cavallini, Valentina DiPietro, and Guido Nistri) were looking to open a new Italian restaurant, they did so right next door to their successful existing one. So it is that Monello: Italian Street Cuisine shares a wall with Bencotto in the Q building.

I’ve eaten my way across several regions in Italy (Florence in Tuscany, Rome in Lazio, Trevi and Perugia in Umbria, Venice in Veneto), but I have yet to make it to Milan in Lombardy. My only experience with Italian street food was found in Venice, in the form of cicchetti bars, which are similar to the tapas bars in Spain. You tend to stand instead of sit, and order pre-made items by pointing at what you want behind the bar. In Italy happy hour, or aperitivo time, is a laid back, often several-hours long stretch to sip cocktails, socialize, and enjoy shared plates. Apertivo hour begins at around 5 p.m., and dinner is typically at 9 or 10 p.m. Apparently Milan has been known as “the capital of aperitivo” since the early 1900s.

Our friends Mana and David made it to Monello before me and my David, and invited us to return with them. I checked out the web site in advance, and read about the “secret 27-ingredient recipe for homemade vermouth.” David (not mine, the other one) ordered a cocktail I’d never heard of, one that is entirely vermouth. I always thought of vermouth as nothing more than a mixer. The “rock & twist” is sweet vermouth on ice with an orange twist. Though my friends urged me to order it, there was no way I could get anything but the “vecchio stile.” It was bourbon based, and I’m on a bourbon kick. But it also included chinato, a flavor I first sampled at Noble Experiment, in a drink prepared by the masterful cocktail king Anthony Schmidt. Unlike vermouth, which is flavored with wormwood, chinato’s taste comes from China bark. I find it to be spicier and less bitter than even the sweetest vermouth. 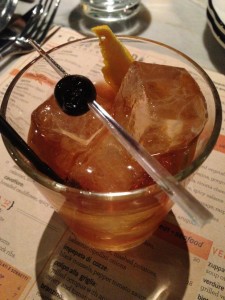 David ordered the “corpse reviver,” a classic cognac cocktail. This one featured slices of apple and sweet vermouth with the cognac. 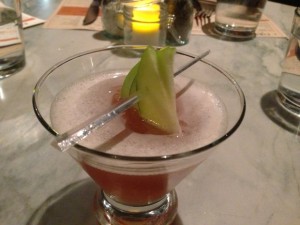 With our drinks came complimentary seasoned Lupini Beans. They have a thicker outer casing that you bite to get to the nugget of soft bean inside.

Seated at the table beside us was a familiar face — Mari Payton of NBC San Diego. After catching up a bit, I let her return to dinner with her friend, but not before making note of an interesting looking dish on her table, which we ended up ordering. 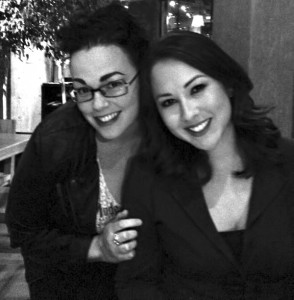 The dish was a sliced flatbread wrap, similar to lavash, filled with arugula, parma prosciutto, and burrata. We enjoyed the flavors, but all agreed that even with four people, it’s a filler-upper. We would have been happy to have shared half the amount given. 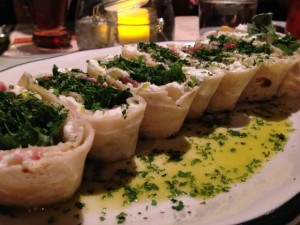 Our server recommended the “panzerotti,” which are “lightly fried mini calzones.” Our friends agreed — they’d ordered this appetizer on their first visit. Here the portion issue was just the opposite of the wrap. We were four, and they served a plate with three of the little football-shaped goodies. I felt this was a failing on our server’s part, who could have easily requested an extra from the kitchen so that each of us could have one. Especially because they were so delicious, the two at our table who sacrificed a half were disappointed to not have a whole gyoza-sized piece to themselves. 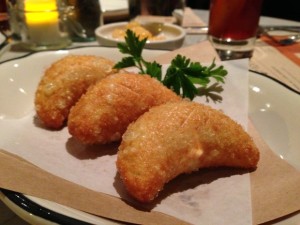 Next to arrive was the polenta. Of white or yellow, we chose the latter, with the porcini mushroom and ricotta topping option (other toppings include sausage, gorgonzola cheese, and spicy tomato pork ribs). The flavor was spot on — intense, pure porcini and salty breaded baked bits atop the fresh ricotta. The issue here had to do with texture — it wasn’t creamy, it was granular, and the top of the polenta had already formed a skin by the time it was set on the table. If you want an example of polenta done right, see: Cucina Urbana. 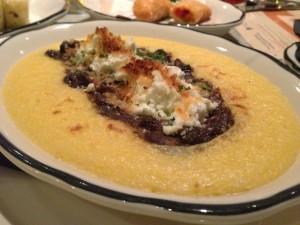 My favorite dish was up next: “piccante” pizza. They aren’t kidding when they say it’s spicy. For the first time I can remember, I did not add red pepper flakes (though they were offered, along with salt and oregano, which I did add). Even better than the pleasant burn was the source of the burn — a tasty, thinly sliced spicy salami. 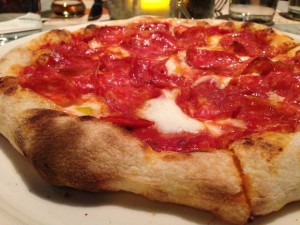 The last savory to hit the table was “cacio e pepe.” Unlike the best version of this dish, which we tasted at Lupa in New York, the pepper here was finely ground and barely detectable, as it was dusted on top instead of coarsely ground and spread throughout. It was pleasant enough, but more in a “mac ‘n’ cheese” way than the simple but surprisingly exciting cacio e pepe of another time in another city. As for the pasta itself, it was excellent — housemade, not overcooked, and flavorful enough to stand on its own. 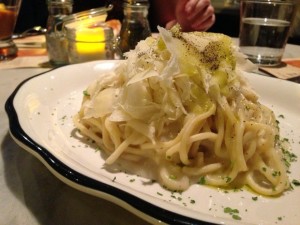 My dessert was the only thing I wouldn’t share — the homemade gelato was among the best I’ve tasted. I had a bite of the vanilla custard-filled, roasted pine nut tart, which was also delectable, but I let the others share that, mostly as an excuse to hoard my pistachio and chocolate scoops. 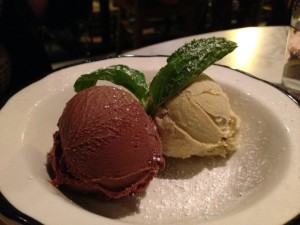 As there were many items (meats, cheeses, and so much more) that we didn’t get to sample on our first visit, David and I vowed to return soon for a deeper exploration of the flavors of Milan.