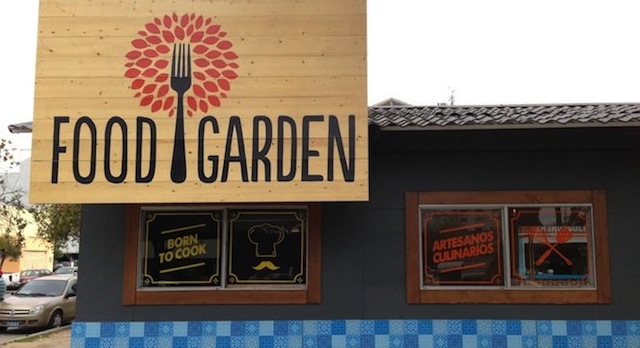 Declared as the “first of its kind created in Mexico,” Food Garden Gastronomic District opened just three weeks ago in Tijuana (at the corner of Blvds. Sanchez Taboada and Misión Santo Tomás). Ricardo Nevárez, the business man behind this more modern version of a food court, pointed to a painted phrase on one of Food Garden’s windows, “Keep Tijuana Tasty,” and said, “I want this to be our catchphrase.” Food Garden is an indoor/outdoor food court with a very specific vision. Each of the vendors is hand-selected by Nevárez. In order to even be considered, a vendor must already have one established location. It doesn’t have to be a building — many of the vendors are known for their street stands. It’s more about having a known, quality food product. And he doesn’t want vendors who already have several locations — Food Garden should be a gourmet food purveyor’s second, not first or third. The impression I got from speaking with Nevárez is that he’s looking to help develop small food businesses, which he feels is best accomplished by assisting them at this crucial juncture. For example, Tacos Kokopelli is already famous for their gourmet street tacos. But prior to Food Garden, you could only find these tacos at street fairs or in the small lunchtime window during which their temporary stand is set up. Now, they have a second, and more permanent home at Food Garden. I’d heard a lot about Kokopelli’s high-end, low-cost tacos, so of course I couldn’t stop by their new digs without sampling them for myself. David and I shared two, the shrimp, pepper, and avocado, and another, with sole ceviche with squid ink. We were encouraged to sample the spicy toppings, and this is where I should have remembered what country I was in. “Oh yeah, I like it spicy,” I said, almost as a challenge. I went for a salsa that was second to spiciest on the counter, and put a huge dollop of it in my mouth. For the next 15 minutes, my eyes watered and my tongue burned so hot I tried to hold it outside of my mouth like a panting dog, and all this while trying to maintain conversation with Nevárez. I’m not proud. By the time the white-hot burning had tapered into a merciful ache, any remnant of makeup on my eyes was either smeared or gone. I’m going to have to go back soon to try the goods other vendors have to offer. At Los Chilaquiles, they offer upwards of 20 variations of the classic Mexican dish. There’s Creperie La Luna, where they make their own caramel, and the Spanish-inspired Etxeverri Tapas y Pintxos. There’s one more aspect that makes this Food Garden different from most other food courts — you order whatever you want from each vendor, but you can only get beverages and pay at one register that is shared by all vendors. I’m undecided as to whether I like this or not. It makes tipping more complicated, that’s for sure. I guess I’ll just have to try it a few more times before I make up my mind. You know, for research.