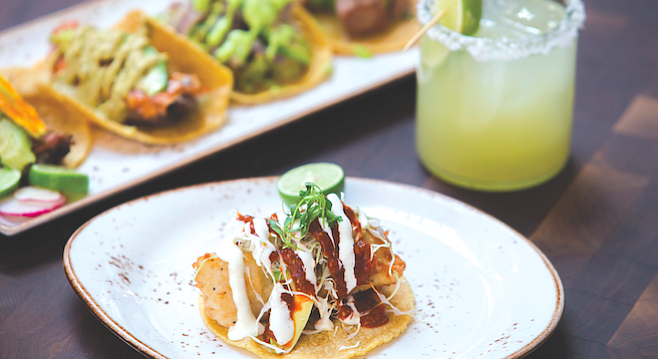 For taco lovers, Cantina Mayahuel is happy-hour heaven — six whole hours every day devoted to taco-and-tequila deals. I recommend taking advantage of the tequila discounts but skipping the street tacos (three little tacos, all the same kind) and instead ordering two of the bigger, juicier $5 versions. These tacos-you-need-to-eat-with-a-fork overflow with marinated meats such as chicken (grilled with pineapple juice and chipotle sauce, then slathered in tropical salsa) and marinated and grilled sirloin beef shoved in a fresh corn tortilla along with cabbage, salsa, crema, and hot sauce.

The “Small Tacos” here may be as diminutive as the space in which they’re served, but the flavor is full-sized. The order comes with three tacos you can mix and match, choosing from grilled chicken and veggies, pork chile verde, firecracker steak carne asada, grilled chimichurri portobello mushroom, potato soyrizo, cheesy salsa shrimp, or beer-battered fish. My favorites are the firecracker steak (the intense heat of which is cooled down by a fresh and creamy slice of avocado on top) and the zesty pork chile verde. Add a side of the tastiest fried pickles in town, and you have yourself a meal worthy of any of the 42 excellent brews on tap.

Puesto at The Headquarters

Puesto’s avante-garde and deceptively filling tacos are downright fancy. Here you’ll find exotic tortilla fillers such as calabasitas (zucchini, corn, tomato) and tinga (hibiscus, chipotle) alongside choice meats and fish such as filet mignon, carnitas, seared tuna, lobster, and lamb barbacoa. Instead of cold shredded cheese or crumbled cotija, the tacos at Puesto tend to include crispy melted cheese, which adds another, pleasurable dimension to both flavor and texture.

At Blue Water, you get to choose from among 15 or so (depending on seasonal availability) fish-tastic taco offerings, including shark, scallops, crab, salmon, yellowtail, and red snapper. Your selection is marinated in spicy chipotle and served on a fresh El Indio tortilla (they’re right next door), with cabbage, tomatoes, onions, cheddar, and Blue Water’s white sauce. Be sure to arrive early to beat the line out the door.

The second location for the Tijuana-based family-owned and operated company that first opened in 1972. Here you can get adobada (marinated pork) sliced right off the spinning griller and into a corn tortilla that was made by hand moments before. For adventurous eaters, El Gordo also offers marinated meats such as cabeza (beef head), lengua (beef tongue), tripa (beef intestines), and buche (pork stomach).

Founded by three brothers who probably wrestled a lot as kids, this Mexican-wrestler-themed joint offers a side of bright, colorful, glittery camp with every taco. This is one of those rare places where you can get “breakfast tacos,” such as El Poblano (egg, poblano chiles, cheese, corn, and poblano sauce) and the Smart Start (egg whites, mushrooms, zucchini, black beans, queso enchilado, and poblano sauce). After 11 a.m., your taco choices shift to eggless options that are just as delectable, including the classics (carne asada, pollo asado, and adobada) and inventive concoctions such as the Flaco Taco, with lettuce in place of the usual tortilla.

Craft & Commerce may be famous for its fine libations and elevated bar food, but their fish tacos are particularly toothsome. It’s two for $10, with selections including seared albacore, grilled shrimp, and fried or grilled mahi mahi. My standard order is one grilled shrimp and one fried mahi mahi, all smothered in pico de gallo, guacamole, cotija cheese, cabbage, and crema (malt aioli for the mahi mahi).