Dumpling Inn is bigger and better 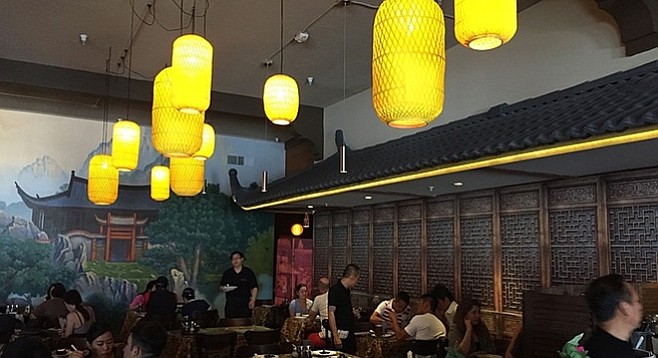 Dumpling Inn has long been one of my top recommendations for Chinese food, but I have always urged people to get their food to go. “It’s impossible to get a seat unless you don’t mind waiting for an hour or two, which isn’t feasible for most of us on a lunch or dinner break,” I’d say.

Though I have dined in a few times, most often the long line of people waiting for their names to be called and crossed off the clipboard hanging outside the front door of the tiny restaurant drives me away. David and I had given up on attempting to dine in altogether, relegating ourselves to the reality of takeout, when we learned that Dumpling Inn was going to take over the abandoned supermarket that was just a dumpling’s throw from their front door.

What had been a quintessential hole in the wall — tiny, hectic, stressful, but worth the fight for most to get to some of the best damned Chinese food in town — was going to become a place where we could actually sit down and dine without the guilt of knowing there were 20 or 30 people wishing you would hurry it up a little. Finally, after nearly a year of waiting for the expansion to be complete, David and I strolled in to the new digs for lunch. I smiled at him in disbelief when we were seated immediately.

We ordered off the lunch menu and asked for containers to wrap up each dish we tasted because we knew this would be as much about the leftovers as the meal. We began with an appetite-whetting bowl of wonton soup ($7.95). Though it’s nothing spectacular to look at, the broth is complex — layers of flavor with none of the grease.

Of course, we had to get some dumplings. On our last visit, we’d enjoyed the pan-fried potstickers, but this time we opted for boiled pork and chive dumplings. We fashioned our own dipping sauces from the many Asian condiments on the table, and I noted how great it was that they all fit (in the old restaurant, everything seemed precariously balanced and stacked to fit the small space).

Seabass with brown bean sauce, one of my favorite dishes here

I deviated from my usual order (seabass with black bean sauce) to try something new and settled on the classic orange chicken ($8.95 for the lunch portion). It was a tad sweeter than I’d like, but the spice was perfect, and the chicken was all white and tender.

We also tried the shredded pork with green beans ($8.25). The green beans were fresh, and along with the onions and brown sauce, the thin strips of pork delivered umami satisfaction.

We seemed to have at least three servers. One guy took our drink order, another woman took our appetizer order, yet another our entrée order; multiple people checked on us. One of the women I recognized from the previous location, and I couldn’t help but notice she was much cheerier here (I used to think she was brusque to the point of rude, but now it was all smiles and easygoing disposition). I imagine the staff is as happy about all the new space as we are.

With giant painted murals and all new fixtures, Dumpling Inn’s new space (designed to represent Shanghai City in the early 1900s) is now among the fanciest on Convoy Street. You could easily pluck it up and drop it downtown, and it would not seem out of place. There’s even a bar — the Shanghai Saloon. The full bar will feature craft beer on tap and have an “emphasis on whiskey.” It also comes with its own self-serve, small-bites menu of “casual comfort food for late night bar patrons.”

I’m curious to see how that works out, I imagine it as something like Spain’s pintxos. Items offered include Chinese style meatballs, fried wings, steamed buns, beer battered fish and chips, and much more. The bar wasn’t yet open when I was there at lunchtime (bar hours are 3pm to midnight), but I’m sure it won’t be long before I’m back to check it out.