Nothing fills me with more comfort-foodie anticipation than David arriving home with a pizza dough ball from Mona Lisa. David tried making his own dough a few times, but it’s a lot of work, and is never as good as the Mona Lisa dough. With this primo dough ball, and Mona Lisa pizza sauce, David manages to make pies that are better than any finished pizza I’ve ordered from the restaurant side of the Italian store. David’s kitchen is fully equipped with a pizza stone and all the other accoutrements one would need for making the perfect pie. Usually, he smothers the dough with thin strips of spicy sopressata and red onions, and if I’m lucky, also sautéed mushrooms, all beneath tons of freshly shredded mozzarella. 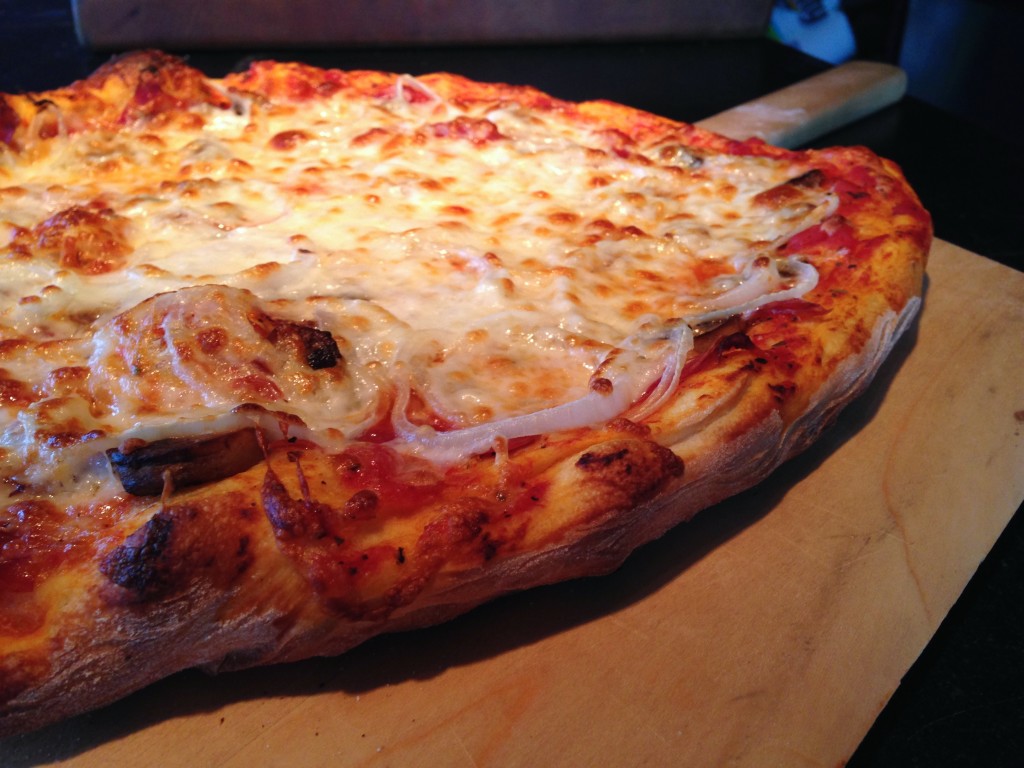 A typical Pizza by David

But this time, as I watched him lay out the dough, David was doing something different. Instead of a circle, he made a big rectangle. “Don’t fuck with a good thing,” I warned, when I realized I wasn’t getting pizza for dinner, but David assured me to trust him, and that “This is going to be good.” 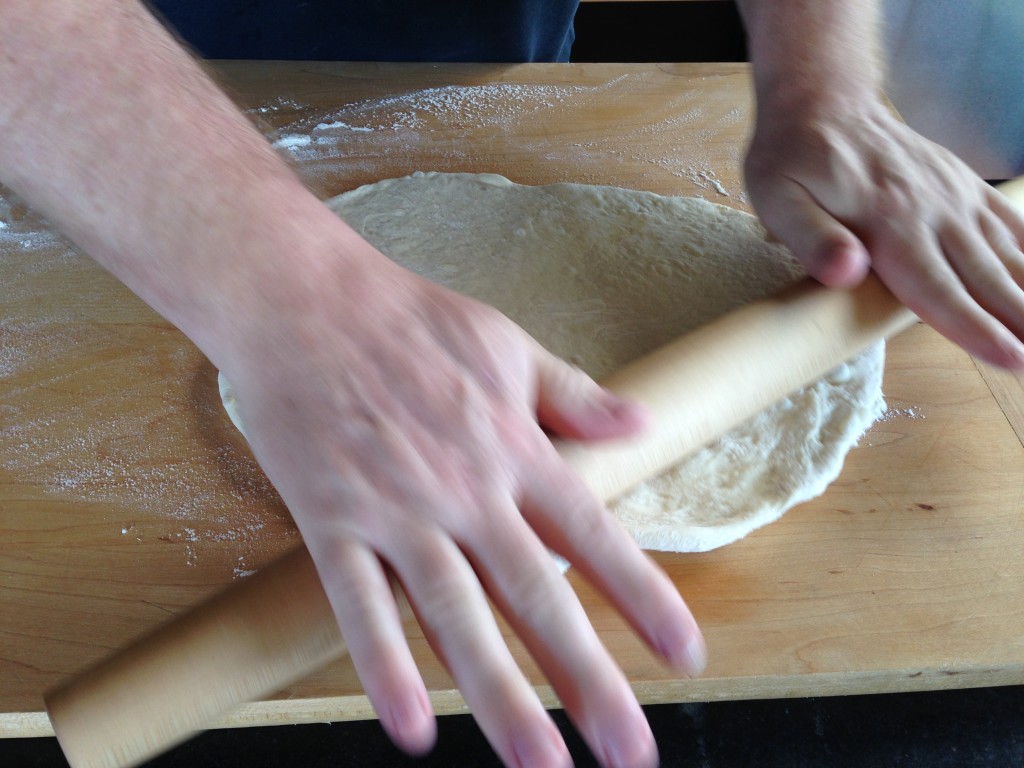 Once he had his rectangle, David grabbed a bunch of leftover cold cuts we had in the fridge, remnants from the prior evening’s charcuterie and cheese board. There was peppered salami, mortadella, and sopressata. 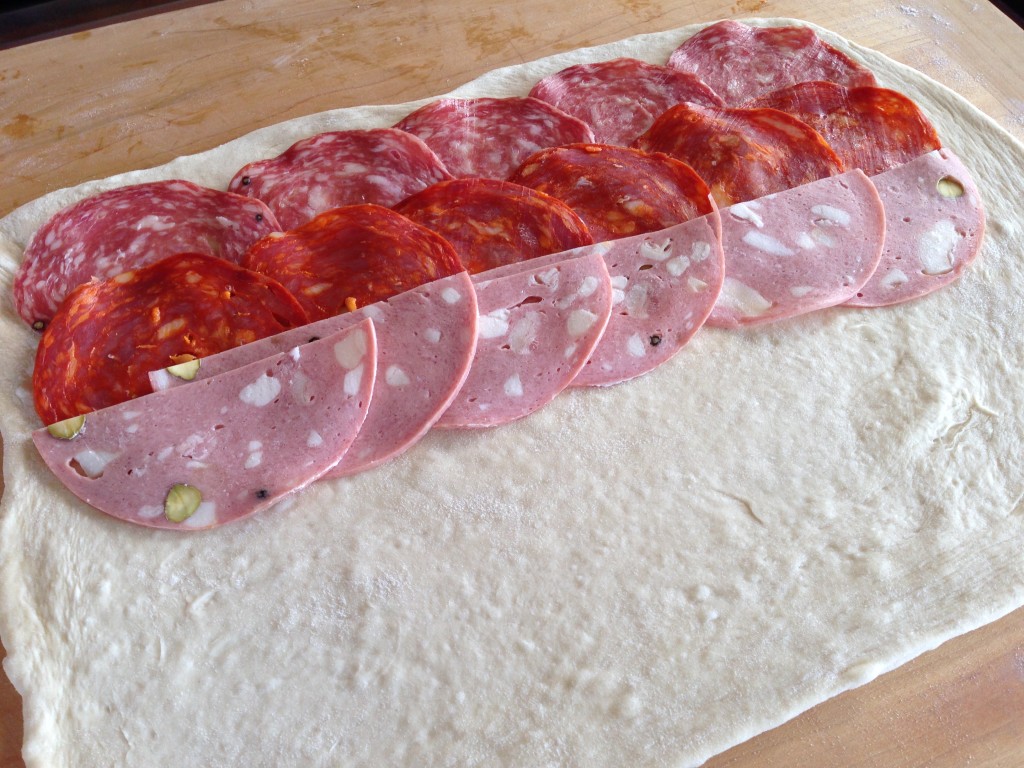 David buried the meat beneath a generous layer of mozzarella and seasoning (oregano, garlic salt), and then brushed the exposed dough with beaten egg. 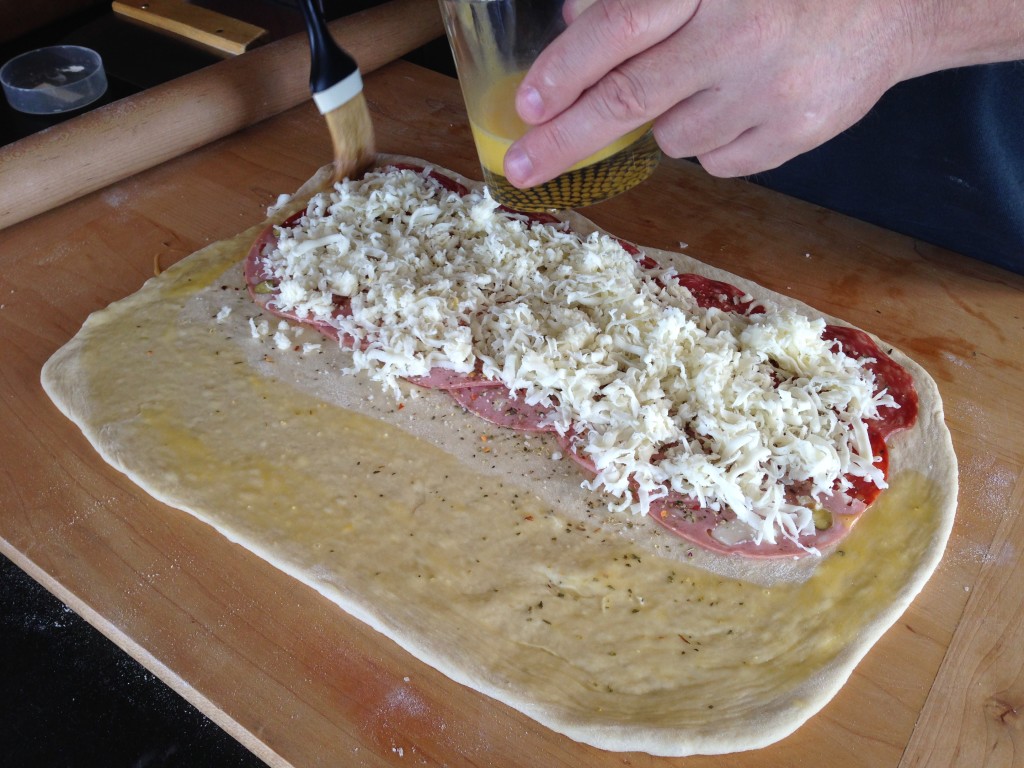 Then the folding began! Neat and orderly, the way David approaches everything. 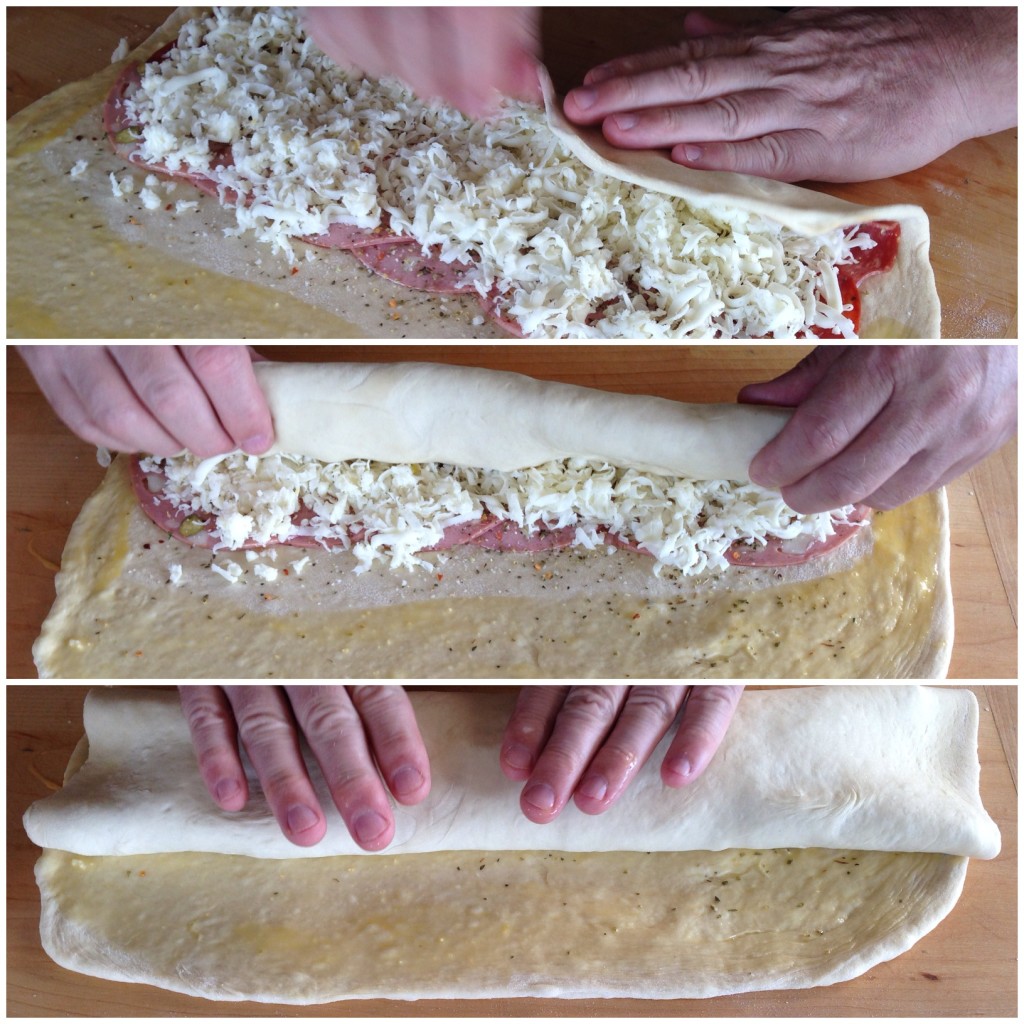 I assisted in the decision to not put marinara in the roll. I thought it would get too wet, and not cook properly. Instead, I suggested we use it as a dipping sauce, which turned out to be the best way to go. See? I help. I was also the one to suggest David sprinkle parmesan on top of the dough-roll after he brushed the whole exterior with more egg. Because I’m brilliant. 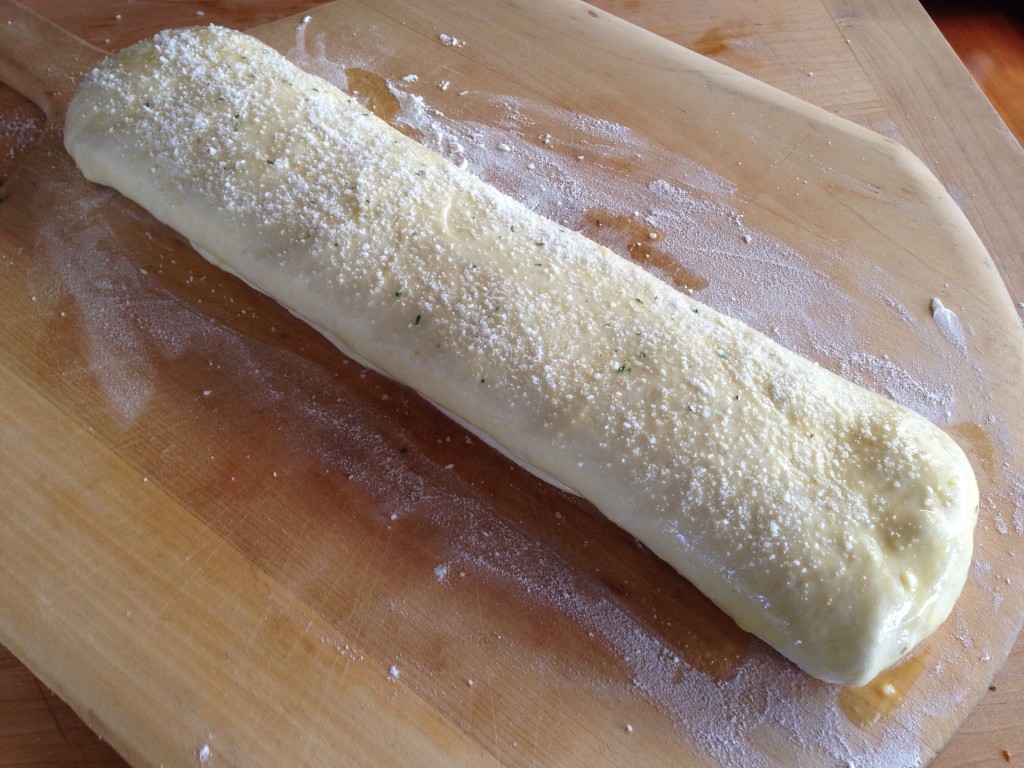 While the Stromboli was in the oven (on a preheated pizza stone, oven set to 400 degrees), I made us a salad. Look, Mom, I’M COOKING! Check it out: iceberg lettuce, pepperoncinis, kalamata olives, marinated peppers, and parmesan. As my sister Jane (who also doesn’t cook, but has watched a lot of Emeril) would say, BAM. 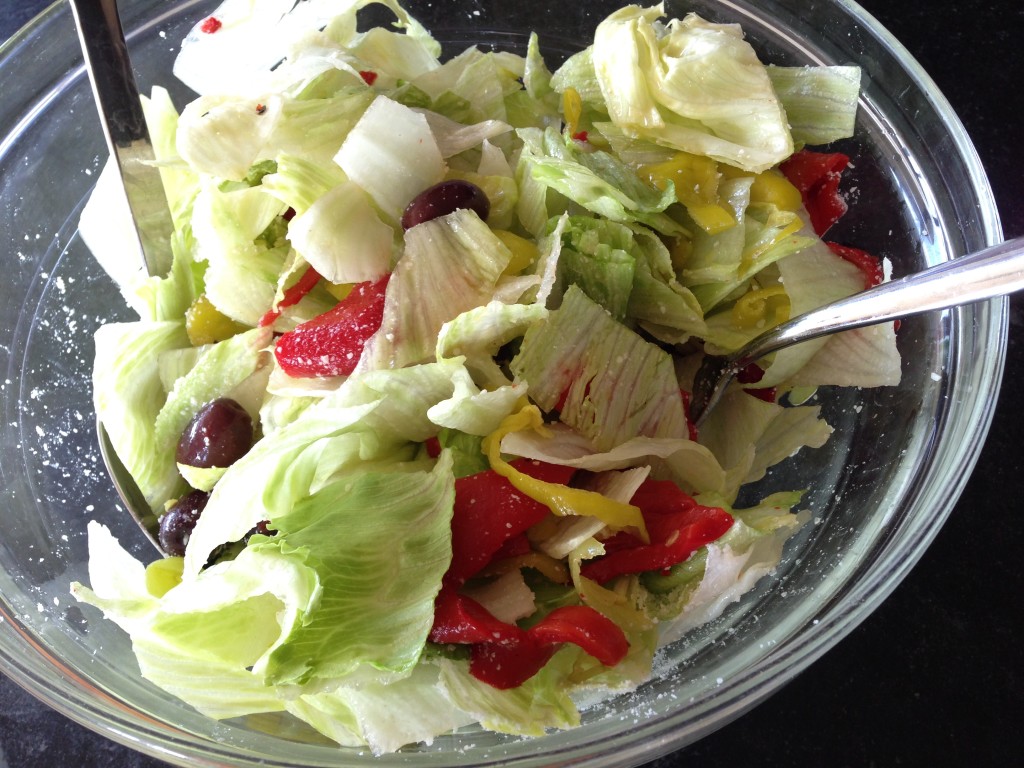 Before popping it in the oven, David had sliced little slits in the top of the Stromboli, to let it breathe or something. Probably so it wouldn’t explode. Or maybe he just knew it would look damn gorgeous later. 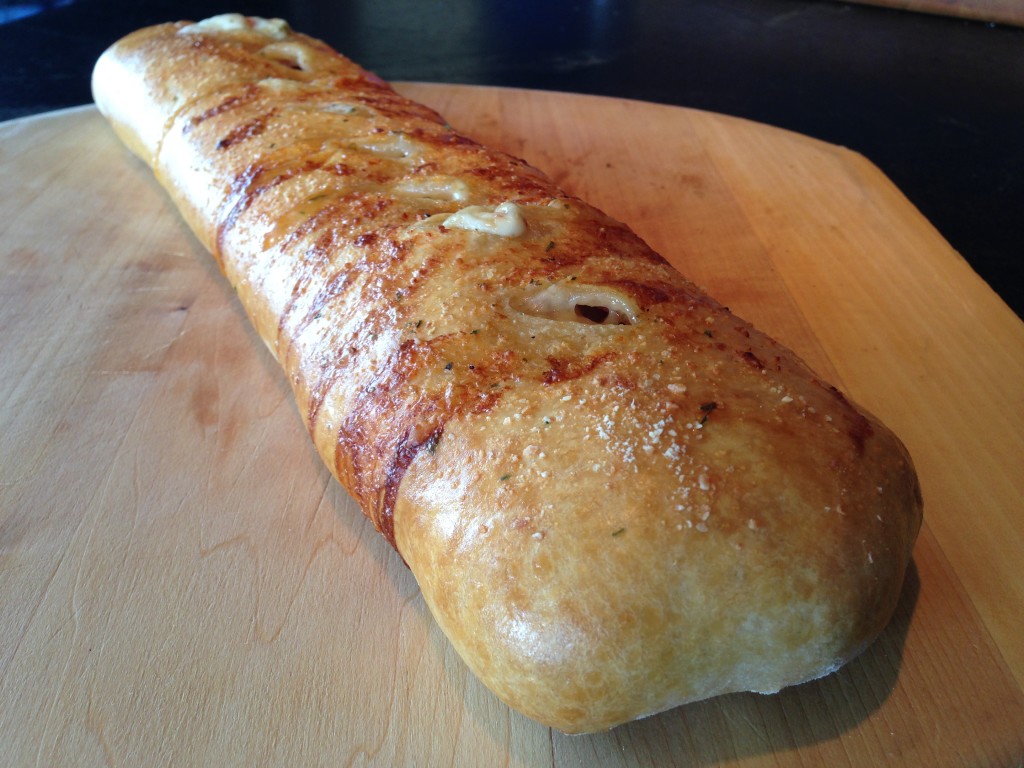 Stromboli fresh from the oven

This Stromboli was just as delicious as it looks. The meat baked with the cheese, that delicious dough, the garlic salt and marinara dip, but seriously, it didn’t even need the marinara. David was pleased when I told him that, despite my trepidation about its “not being pizza,” the Stromboli was just as awesome, and I wouldn’t mind having it again sometime. 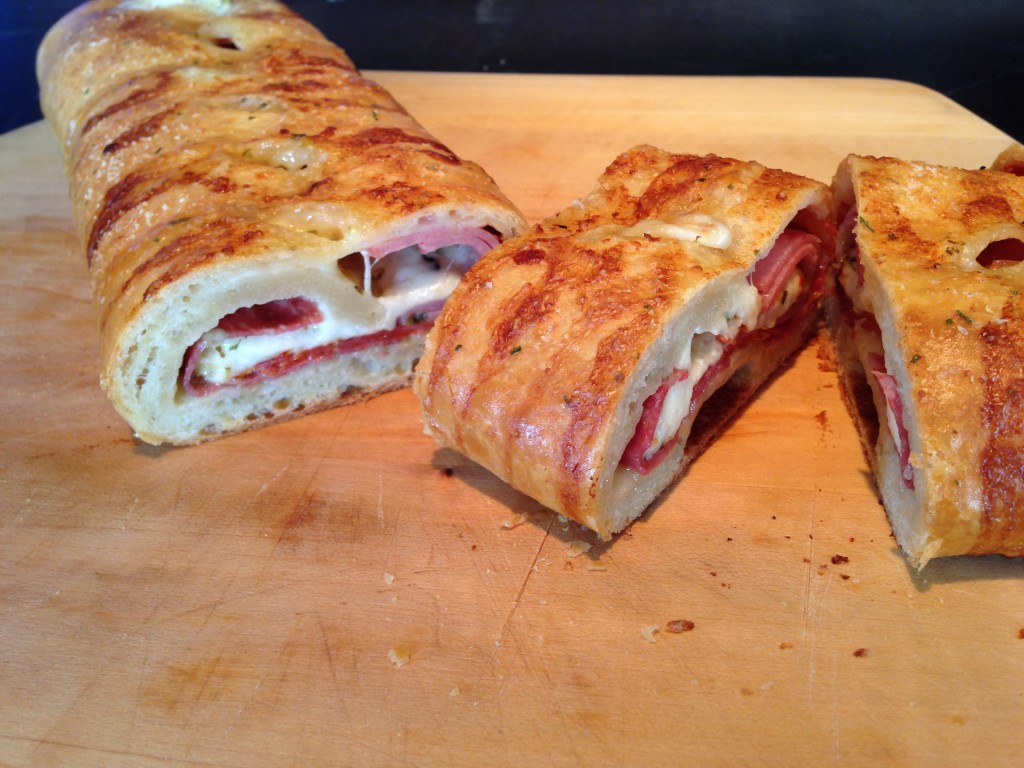