The story of this dinner begins the previous night, when David, for perhaps the second or third time in ten years, made me something I didn’t like. I tried to pretend it wasn’t terrible. But the vinegar-y funk on those chewy beef kebabs — which had been marinated by other people, by the way, David would never have messed up a marinade like that — made my face scrunch involuntarily. I tried to save my pained expressions with smiles, and I did my best to be stealthy when I spit out the overly chewy bits. I pushed stuff around on my plate so it looked like I was being productive. But David knew.

“If this were filet mignon in your seasonings, and not this stringy kebab meat in whatever this store-sauce is, then I would probably love it,” I said. “It’s not like you made this. You just heated it up, really. But even so, beh beh, you know I’m not so much a ‘meat and potatoes’ girl as I am a ‘chicken and pasta’ one.”

David’s face fell. I think he was more disappointed than I was. He vowed that the following day, he would prepare a meal he knew for sure I would like. So it was that I found myself in the kitchen, smiling in sweet anticipation, as David prepared this simple but delicious chicken and pasta dish.

First, David pounded the chicken. I know this flattens it, but I think it tenderizes it too. I also think  David sometimes fantasizes that I’m the chicken. I mean, that’s what I would do if I were him. 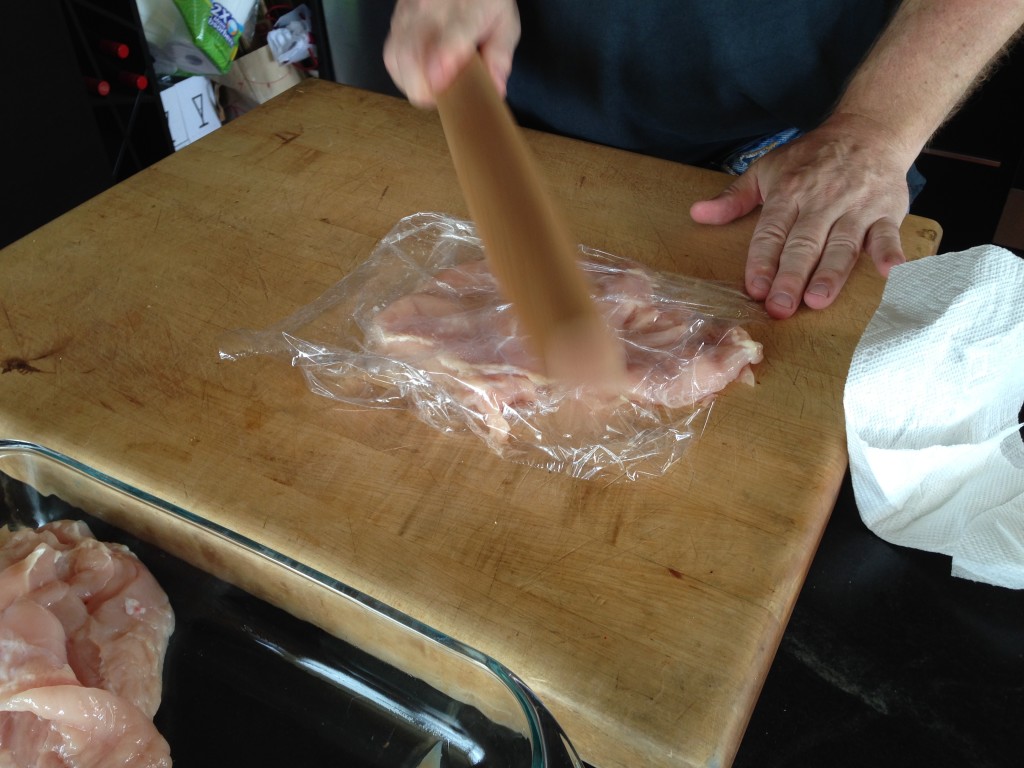 And therein lies the rub… sorry, I couldn’t help myself. If this were my column, and David was editing it, he totally would have taken that out. Anyway, he rubbed that chicken down (using his bare hands, like ew, right?) with pepper, salt, and his all-purpose seasoning, Vegeta. 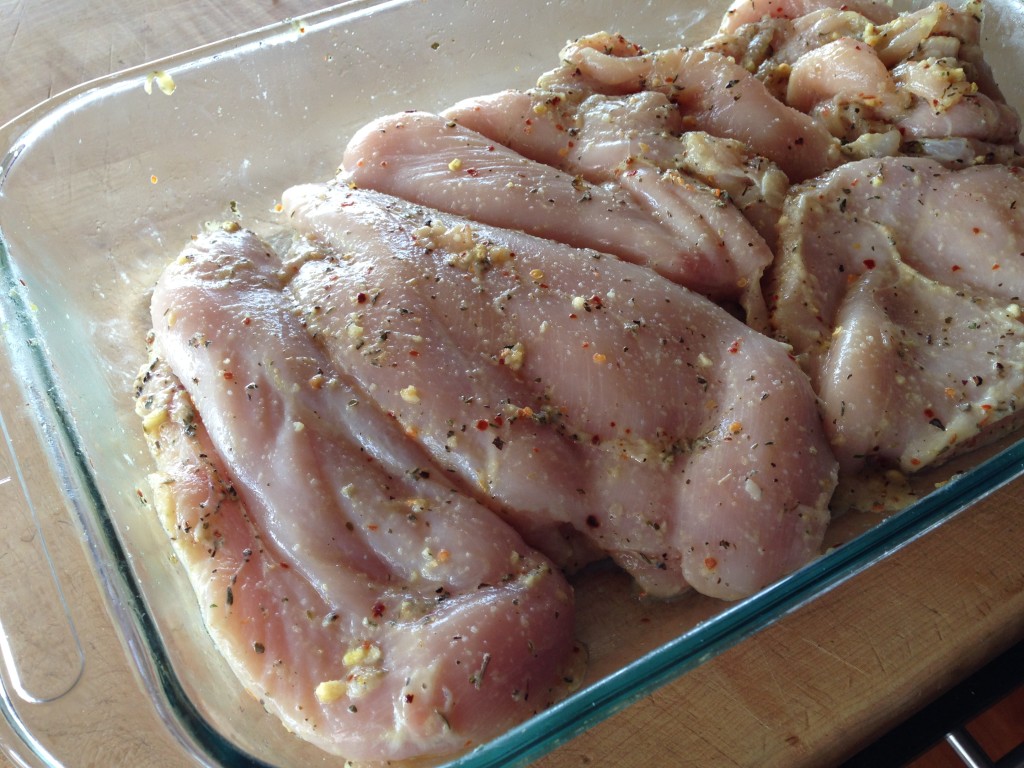 All this pounding and rubbing was taking a long time, so I opened some rosé and nibbled on some leftover spicy soppressata I found in the fridge. 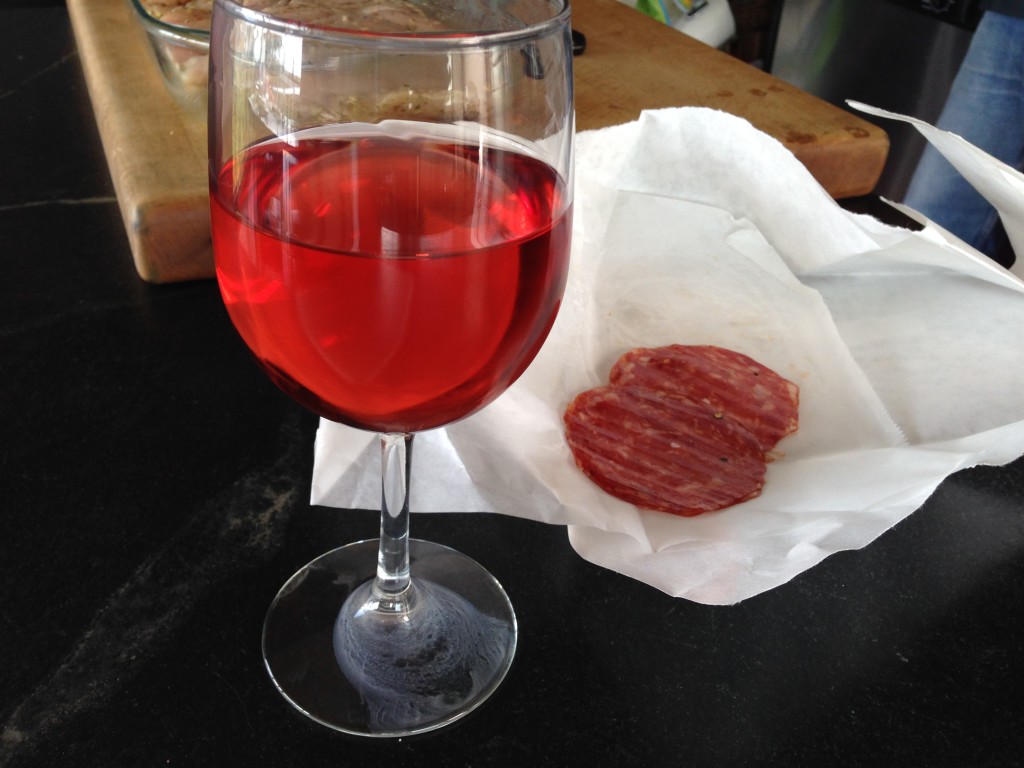 Grilling! The best thing I ever did was assemble that grill. That’s right, I assembled it. With a little help from my friend Jen. But mostly it was me. 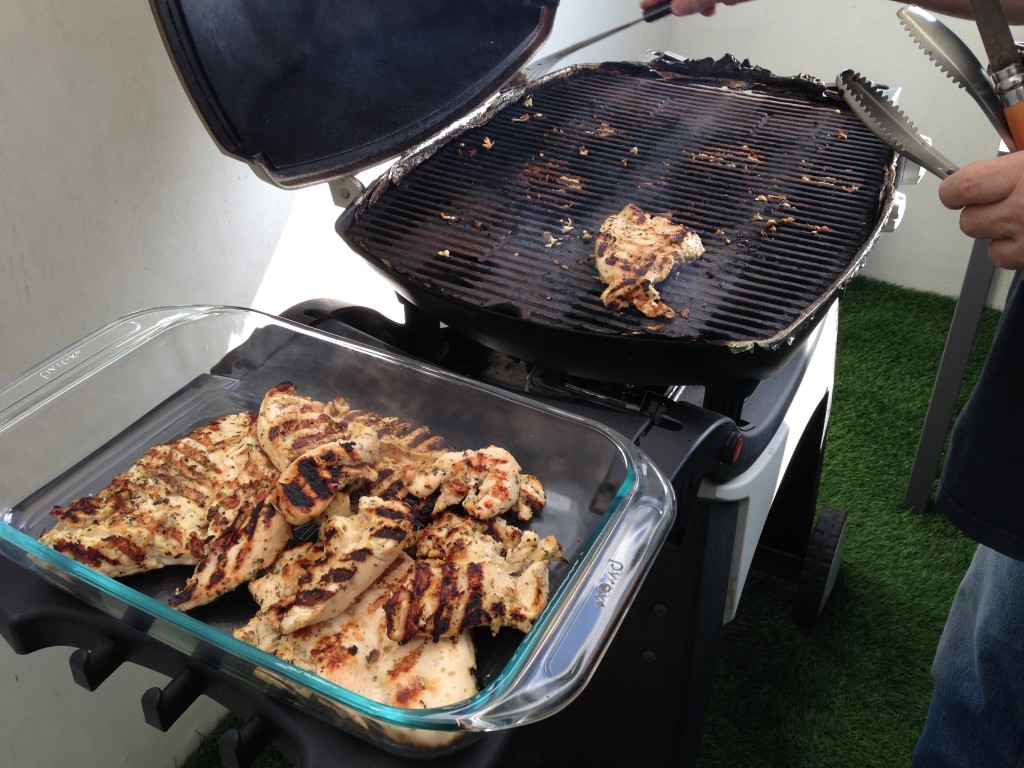 David recently discovered these jars of roasted and pickled (but not vinegary) red bell peppers. He chopped some of those up and mixed it with broccoli. 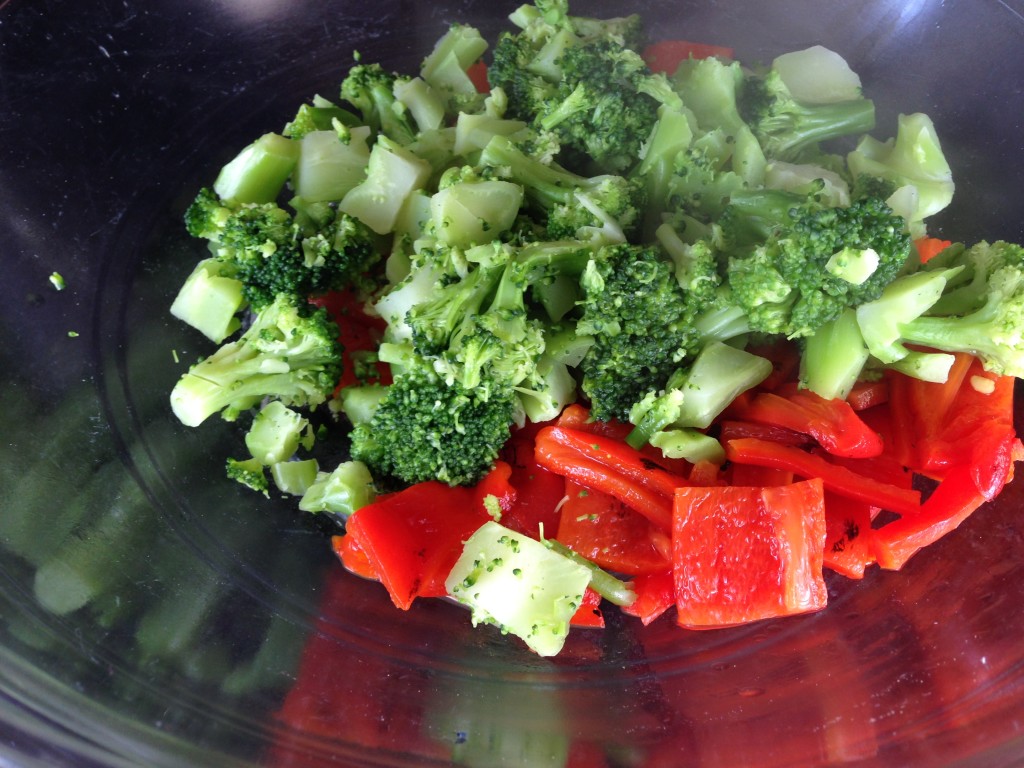 Then he poured all that over steaming fresh pasta. This is around when my mouth began to water. I momentarily quelled my salivary glands with a sip of wine. 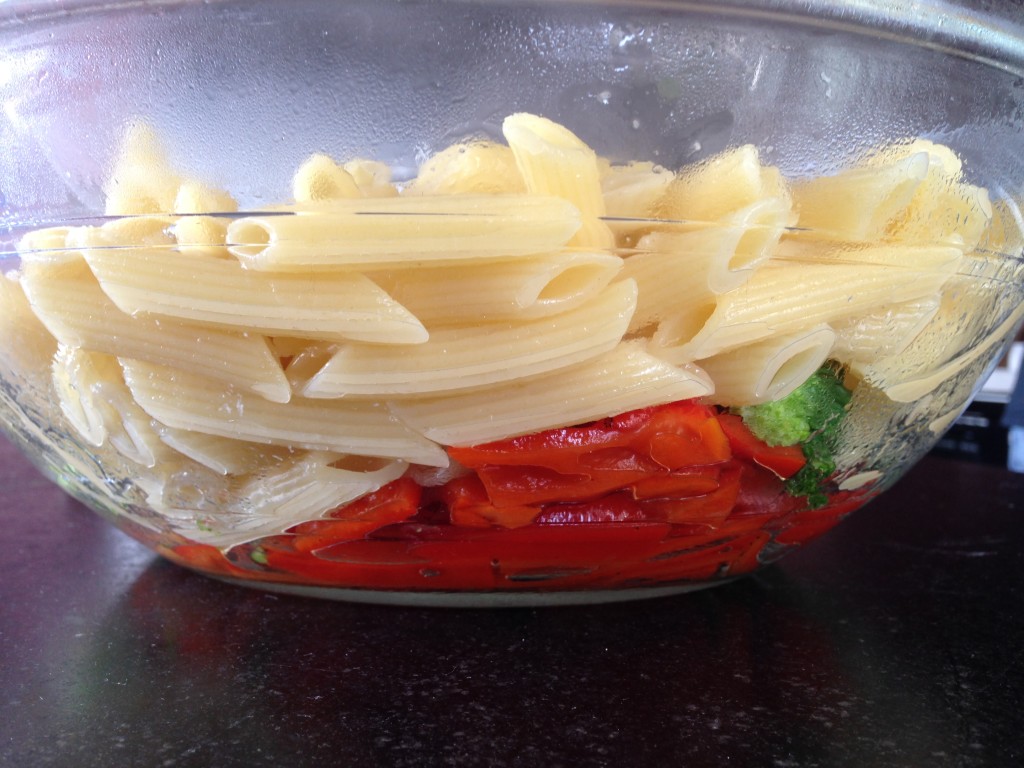 Finally, he stirred in the chicken (which had been resting — he takes it off the grill before it’s completely done, because chicken CONTINUES TO COOK after it’s removed from the heat, and if there’s one thing David can’t stand, it’s overcooked chicken). 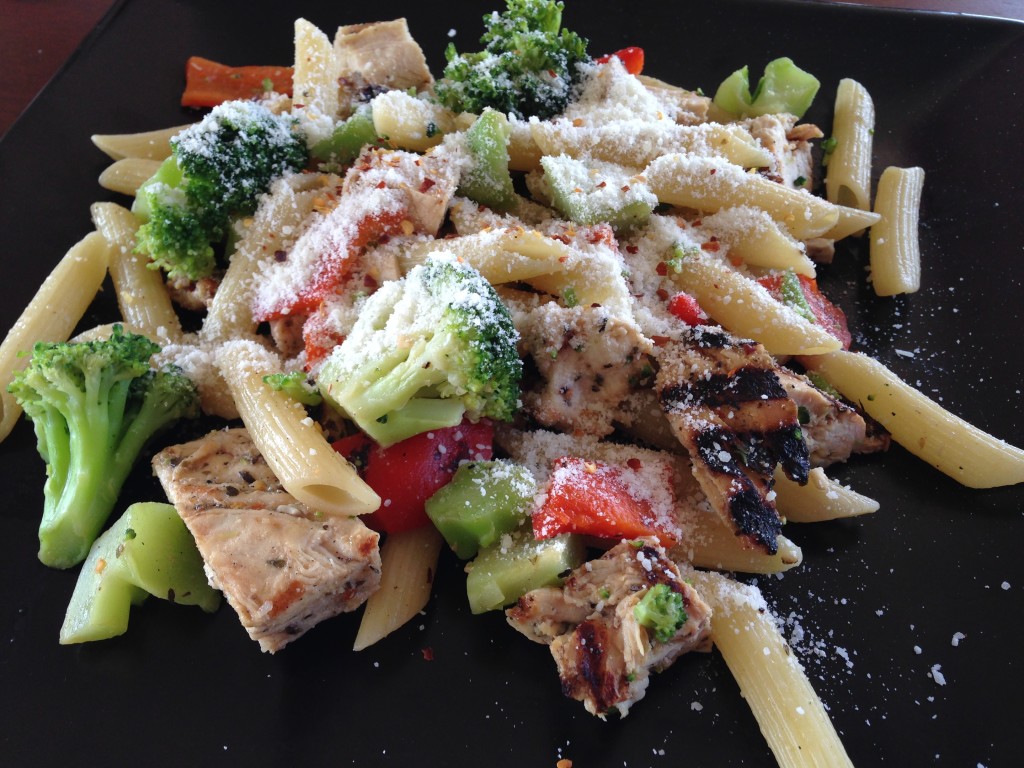 Topped with grated parmesan for the added yum

When I cleaned my plate, David smiled the satisfied smile of a man who is certain he is not only a good cook, but also a good husband. Thank you, Beh Beh. 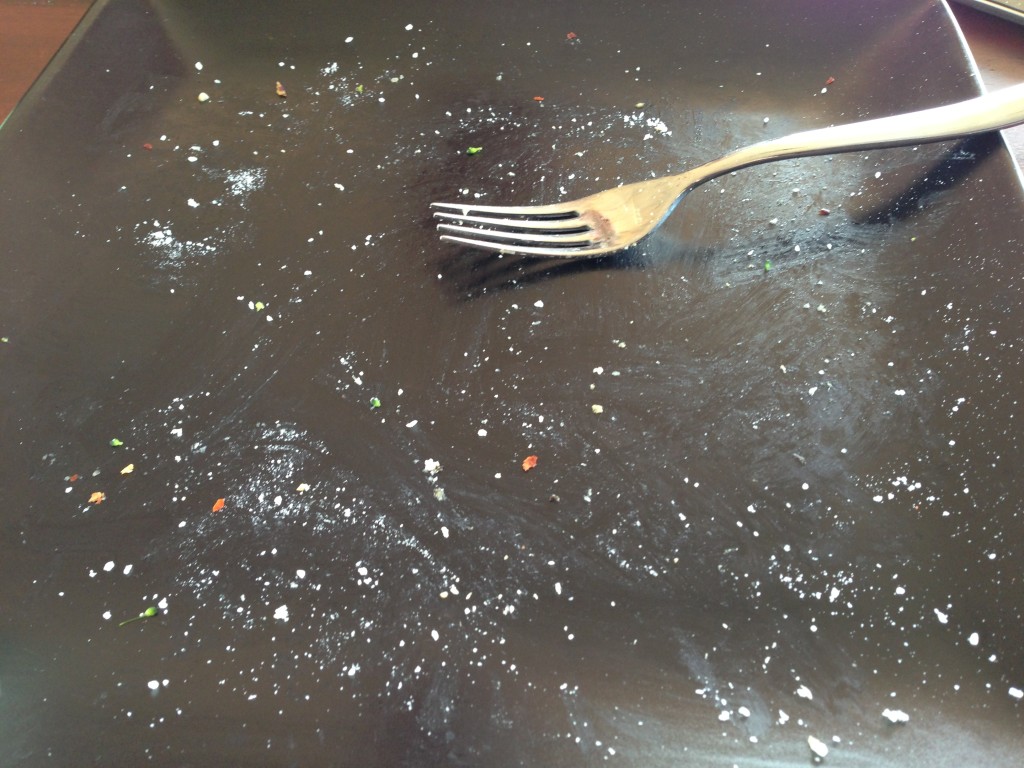