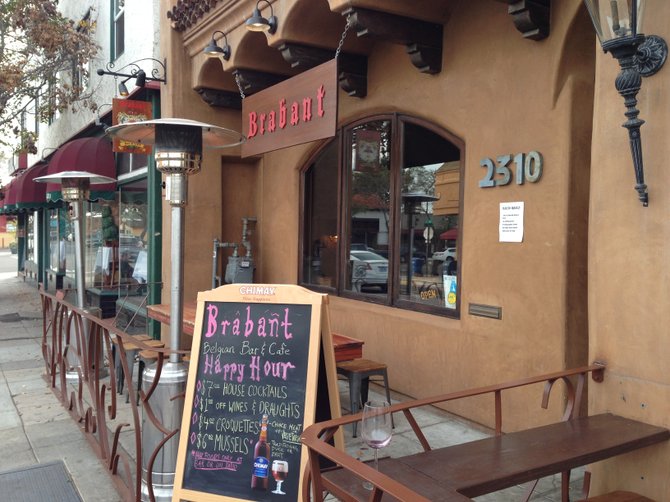 It had been a frustrating day so far — putting out work-related fires and waiting around for a plumber for actual water issues; before I knew it, it was 3 p.m. and neither David nor I had eaten a bite. I needed to run an errand in Golden Hill, so I asked my man to join me, and search on his phone for interesting places that were open in the San Diego dining dead zone between 2 and 5 while I drove. “Bar…bra…Brabant,” David said. “Belgian-style food. They opened at 3 p.m. Check out these pics.” He held his phone up for me to see a handful of Yelp-ed images. “And they focus on Belgian-style beers.”

“I’m in,” I said. After swinging by the Reader office to pick up some mail (my errand), I headed toward South Park. I didn’t need to search addresses – I was pretty sure this was the new place that went into Vagabond’s old spot, and I was right. 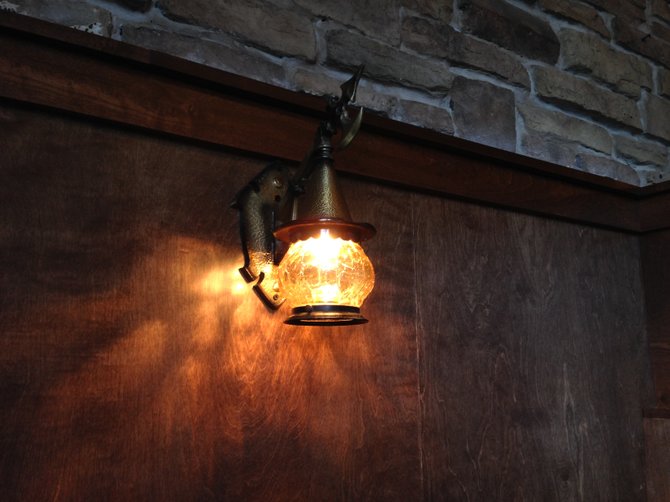 I dug the interior. Torch-like sconces, wooden chairs, deep booths, old brick walls: it had a romanticized, medieval German feel to it, similar to some of the ancient pubs I visited in Zurich.

The staff was friendly and enthusiastic. We were given an extensive beer menu, which included tasting notes and suggested pairings. I began with La Fin Du Monde, which was described as having a “nose of clover honey, citrus, coriander and sweet malts, flavors of the same with bready hints,” and a “yeasty and fruity finish.” I thought it was a steal for a bottle at $5. 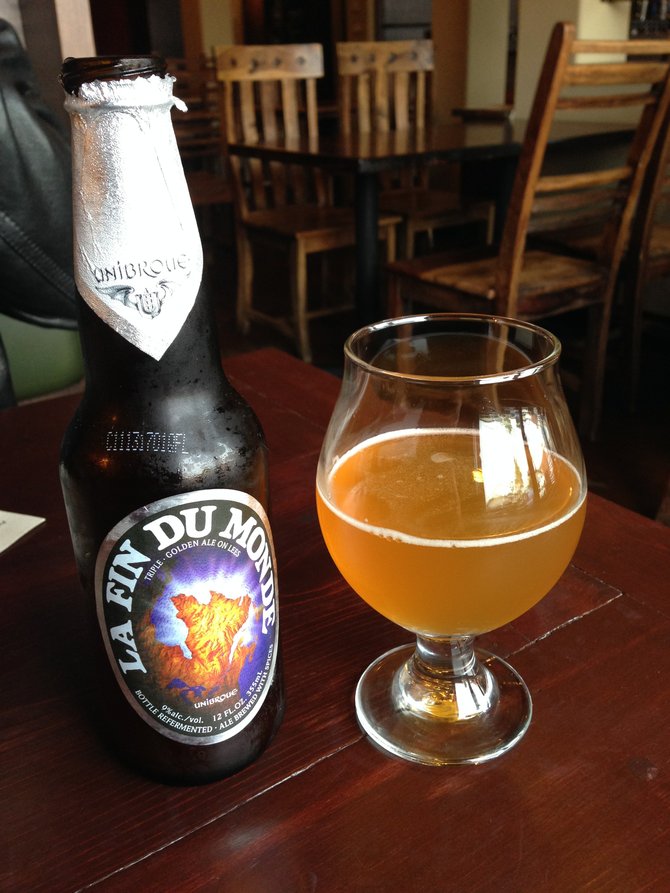 Our server recommended two items above all others on the menu, if we were looking for the “classic Belgian experience,” which we indeed were. David has been to Belgium, and he described it as the land of fries, so he opted for the mussels and frites. There are three types of mussels dishes: Bratwurst, Duck, and Traditional. David got the first, and our server smiled his approval. 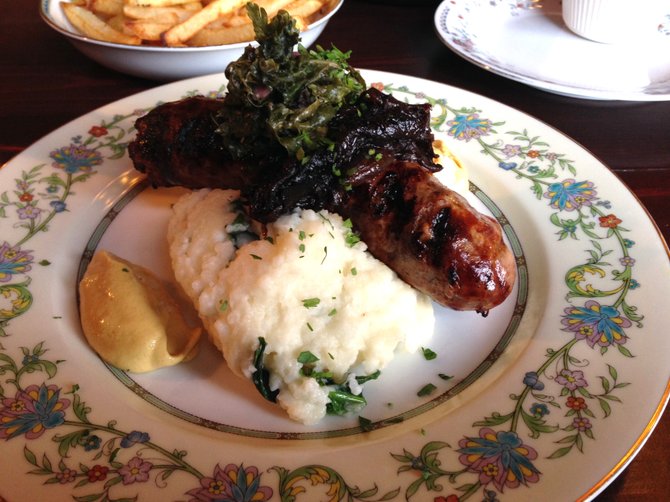 Let’s talk about these mussels. Scratch that, let’s talk about that sauce — white wine, cream, garlic, tarragon, Dijon, chunks of bratwurst, fennel fronds, and anisette liquor. It was recommended that we place the fries in the pot and let them soak up that sauce, and this was certainly an amazing combination. So good, that even though I asked for ketchup (house made, fresh tasting, without the processed, high-fructose corn syrup quality of bottled ketchup) I left it alone, choosing instead to dip the few fries I purloined from David’s plate into that ridiculously flavorful sauce. “I need a spoon,” David said when he’d finished the fries. In the end, he settled for some tasty grilled bread to get just a few more bites of the stuff. Our server shared that he had once seen a patron lift the pot to his lips to drink the remaining sauce. 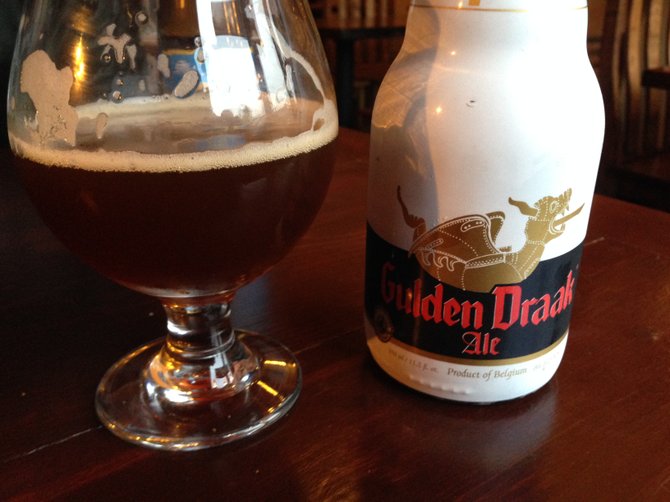 The mussels had been $16. My dish was only $9. I got the bratwurst and stoemp (a seasonal veg and potato mash). The bratwurst is all made in house, and in a few months, Brabant plans to offer a charcuterie board of all in-house aged meats. Atop the stoemp was house-made kraut and blackened onion, which served as a lightly sweet counterpart to the rich brat. 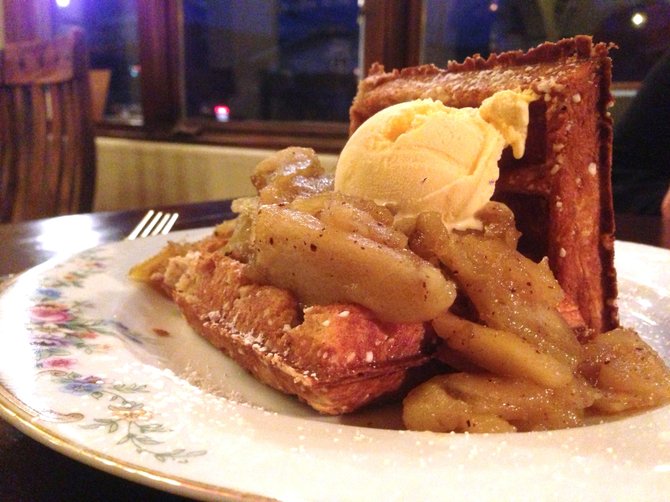 We had our eye on the waffle dessert from the moment we’d glanced at the menu. We were relieved when we were told it would take over 20 minutes to prepare. “Great,” I said. “We can digest a bit and get another beer.” As we relaxed into the booth and breathed the earlier frustrations of the day away, David and I mused about how perfect this spot would be for hanging out with friends, and we made notes in our phones so we wouldn’t forget.

The “apple pie waffle” was well worth the wait. The waffle was crisp on the outside, soft on the inside, and had a bit of salt that counteracted the sweetness and made it that much more scrumptious.

Needless to say, we’ll be back at Brabant real soon.