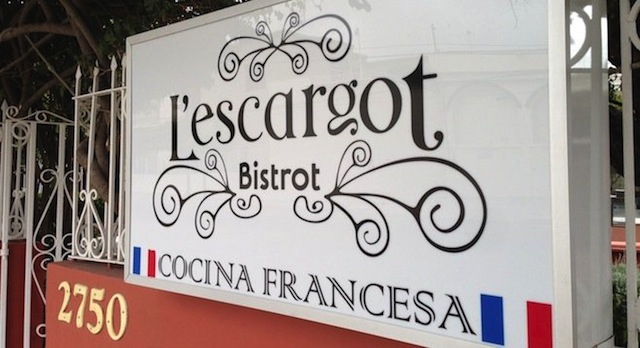 Baja Med is the cool, edgy sibling of the slow food movement, and it’s reserved specifically for the foodie frontier in our own backyard. In T.J., the term is tossed more frequently than an organic spring mix. In San Diego, chef Chad White has helped make Baja Med (featuring ingredients local to this area prepared with a Mediterranean twist) popular with his pop-ups at Carnitas’ Snack Shack.

In my attempt to find the quintessential Baja Med dish (so I could point to it as an example whenever referencing the craze), I ended up finding something a little different — Baja, yes; local, yes; Mediterranean, not exactly. Bistrot l’Escargot is a French restaurant, and France is technically a Mediterranean country, but chef Ryan Steyn is serving up classic French fare with a Mexican twist, not Mexican food with a Mediterranean twist. “We use no freezers,” says Ryan’s wife and co-owner Suzy Monsalve. Instead, every morning — that’s right, every morning, and they also have a 6-month-old baby — Suzy hits up not one or two, but five markets for the day’s ingredients. “When you ask suppliers to bring vegetables, they’re not always good. When I go, I get to handpick the ones I want.” The day we visited, both Suzy and Ryan were wearing “Rock and Cook” t-shirts, to showcase a regular event they host at the restaurant, during which Ryan creates food inspired by rock music. “Tonight, I’m making a spicy ceviche for Tool’s Learn to Swim,” he told us. For the Deftones new tune, Tempest he would serve octopus carpaccio. Ryan was born in South Africa, and it was there that he met Suzy, who is from Tijuana, but went to South Africa to study culinary arts. They fell in love and moved to her hometown to open their own restaurant (soon to be two, they have another, more casual joint scheduled to open in Ensenada). “We’re lucky to have a great grandmother to help us with the baby,” Ryan says.

Of course, we couldn’t dine at a place called Bistrot l’Escargot and not try some snails. There were plenty to choose from on the menu, but we went with the chef’s specialty, traditional Bourguignon escargot with a chipotle based lemon sauce. My issue with snails always comes down to texture. But these small bites were not rubbery or slimy, but tender, and the chipotle added a smoky kick to the lemon garlic butter. The Baja influence was apparent in the purees. Alongside exemplary pork belly and shrimp was an avocado puree, and a spicy black bean puree. Each little pile of paste was packed with flavor. The next dish was interesting on every level — visual, texture, taste. Octopus carpaccio (the tenderness and lack of rubbery quality that generally puts me off of octopus was a delightful surprise) with fried squid ink pasta, avocado, sweet potato puree, and herb aioli. Our extravagant lunch was ended on the perfect note — a dark chocolate-covered profiterole, as elegantly luxurious as any cream-filled pastry I’ve had in Paris. Speaking of romance, Suzy says she’s witnessed around 30 proposals in her restaurant. “This is the place to ask for the hand in marriage,” she says. “Everyone says yes.”