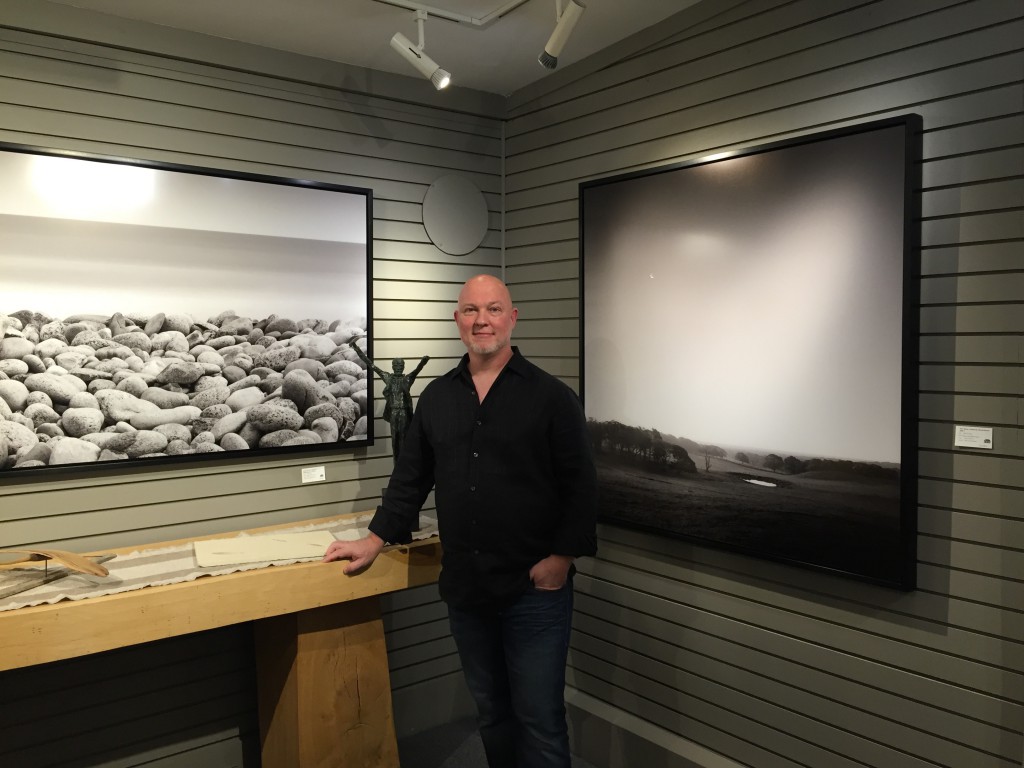 David, in the corner of the room with all his work

If you haven’t read Part 1 yet, what sort of demon are you? Because no human I know could overcome the call of chronology. Demon or not, I’m glad you’re here. Because with all the bright lights shining on the premiere of our latest film, the debut of David’s new work seemed to appear as if in a shadow. Case in point, the primary talking point of the evening was about his work on the film, not his work hanging on the walls. 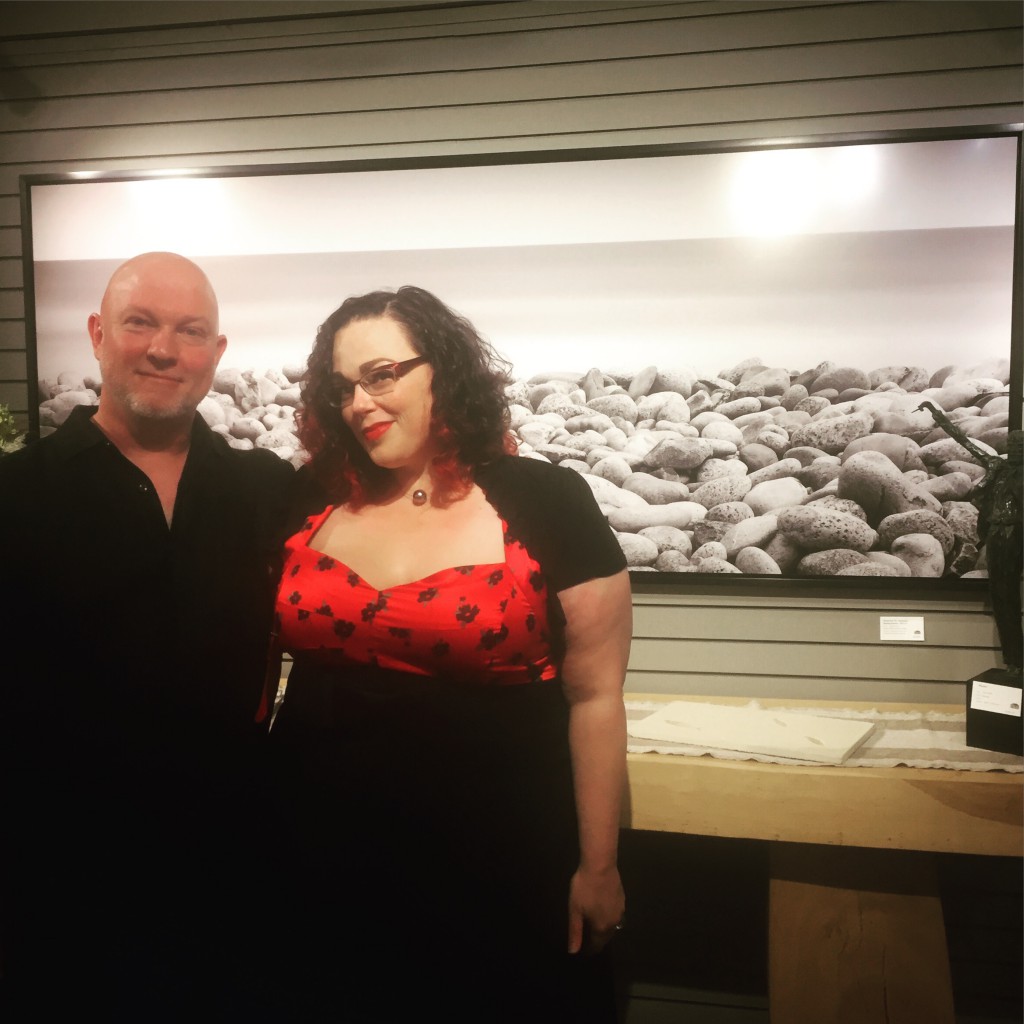 A shot of the artist and his lady, at his exhibition

For 14 years, I’d stood at David’s side for his annual exhibition of new work at the Granary Gallery. We often joke that in San Diego, David is “Mr. Barbarella,” but on the Vineyard, I am “Mrs. Fokos.” But two nights before the exhibition, I’d emcee’d the premiere. And many of those who attended the premiere had come to the show. So suddenly, I was being recognized and approached, and though I soaked in all the compliments to our filmmaking skills, it felt wrong to accept any sort of attention for anything other than David’s artwork, especially while standing in the middle of a room surrounded by David’s artwork. David didn’t mind, of course. David never does. If the heel were on the other foot, however, I would have minded, so I felt for him nonetheless. 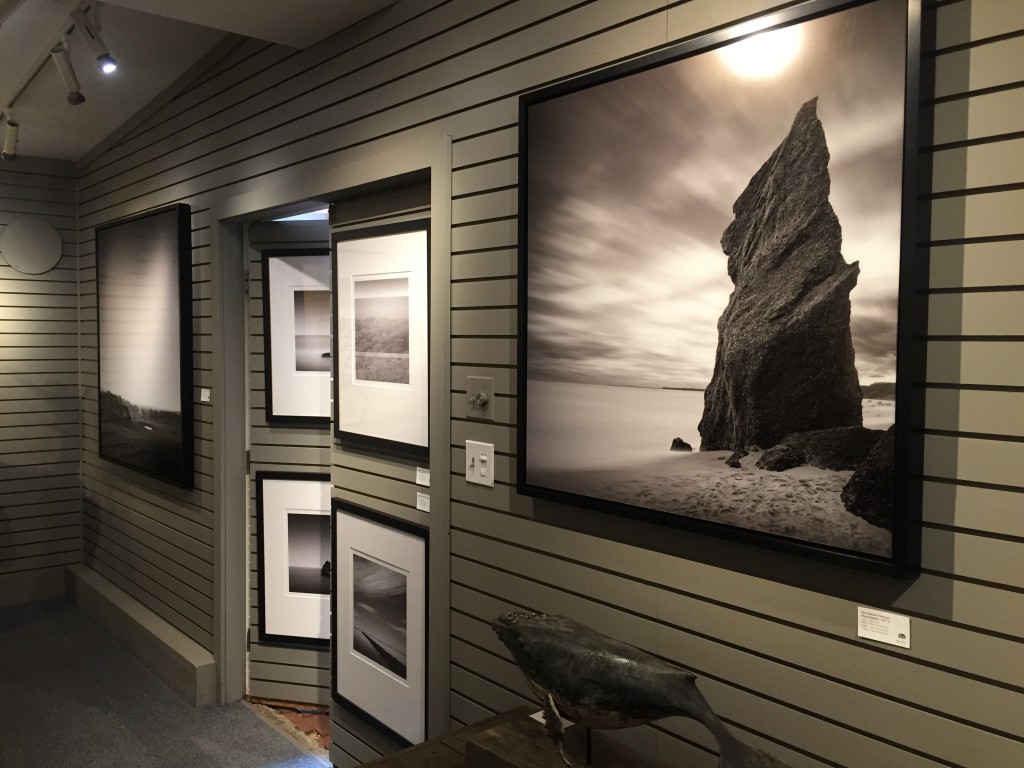 My neuroses over David’s lack of focused attention aside, the evening was a lovely success. So many familiar faces from over the years, old friends from the island and long-time admirers and collectors of both David’s and Heather’s works. The buzz was all about the film, but with the best backdrop imaginable. 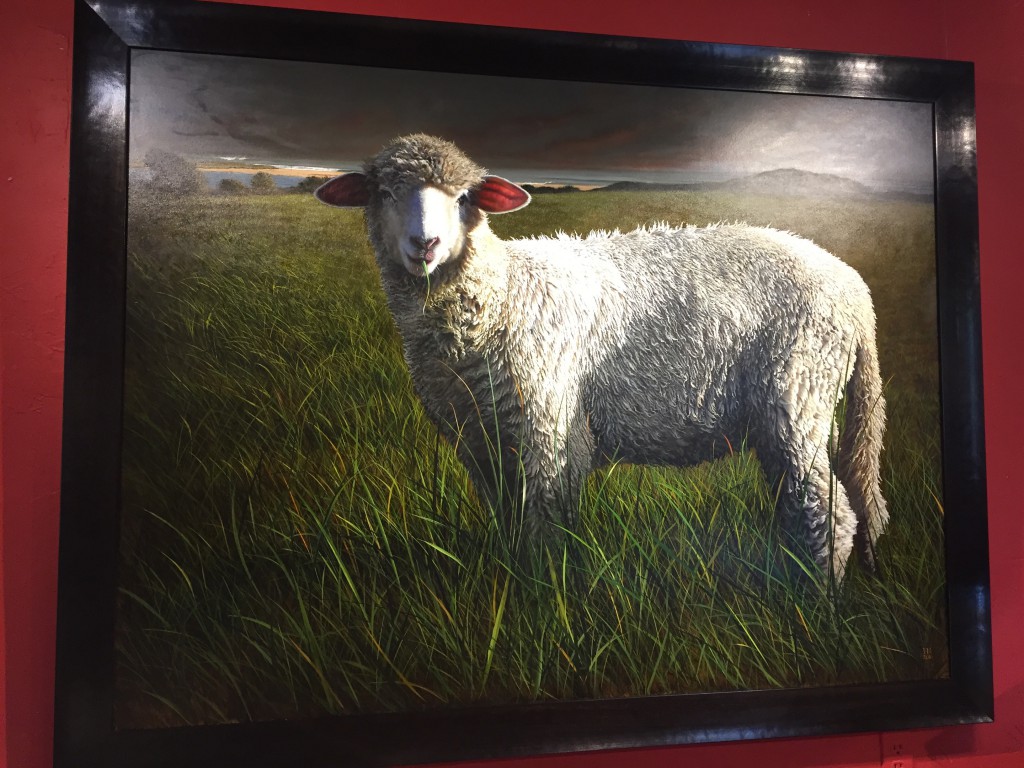 Heather Neill’s painting of a sheep was magnificent, and sold before the show even opened 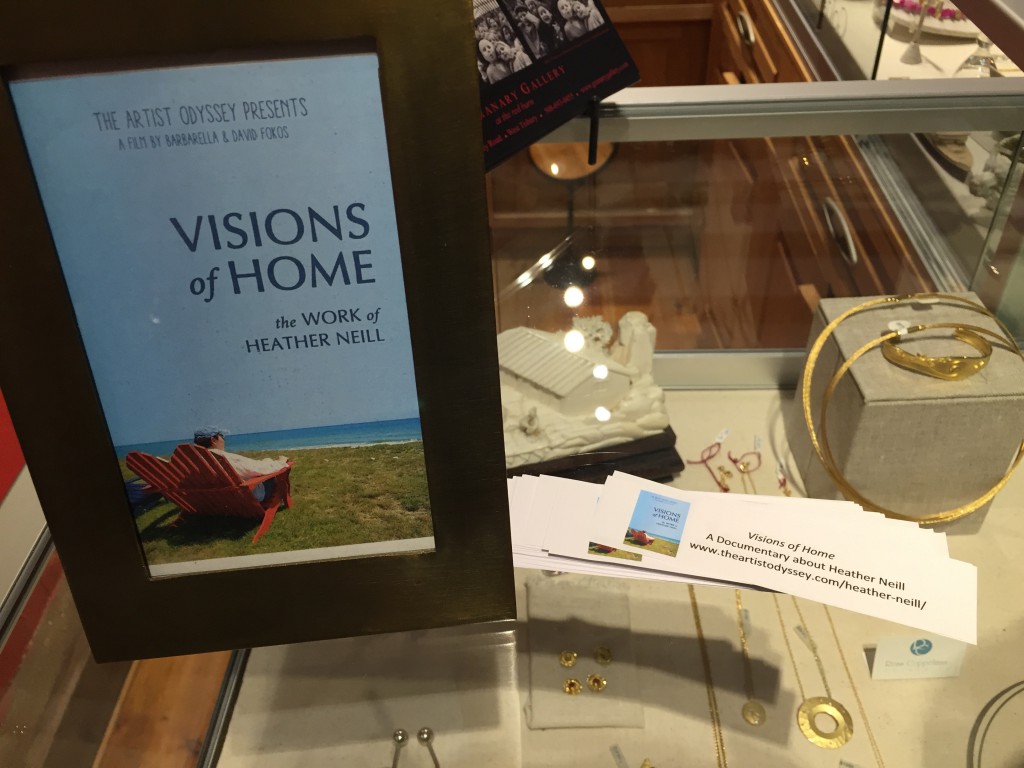 This appeared in the room with Heather’s work, for those who missed the premiere

After the show, the artists gathered for a celebration to end the weekend of all weekends. We went to the Outermost Inn, all the way out in Aquinnah. I’d never been before, but Heather and Pat had raved about it. They know Hugh Taylor (the owner and brother to the musician James Taylor), and greeted him warmly. 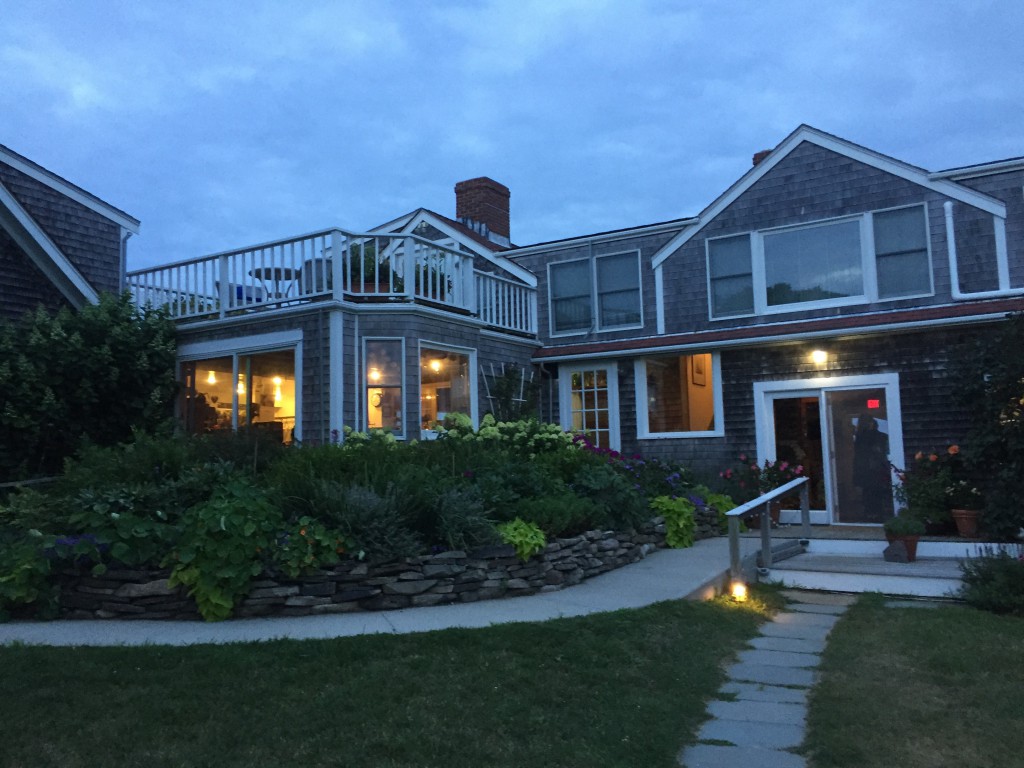 We began with a drink on the patio, in the twilight of the setting sun, with an ocean view in the distance, over a sea of green. There was a deer casually munching on the lawn not 50 paces away. We sat, the six of us (Heather, Pat, two of their dear friends, and Team Fokos), finally breathing after the whirlwind of a weekend. 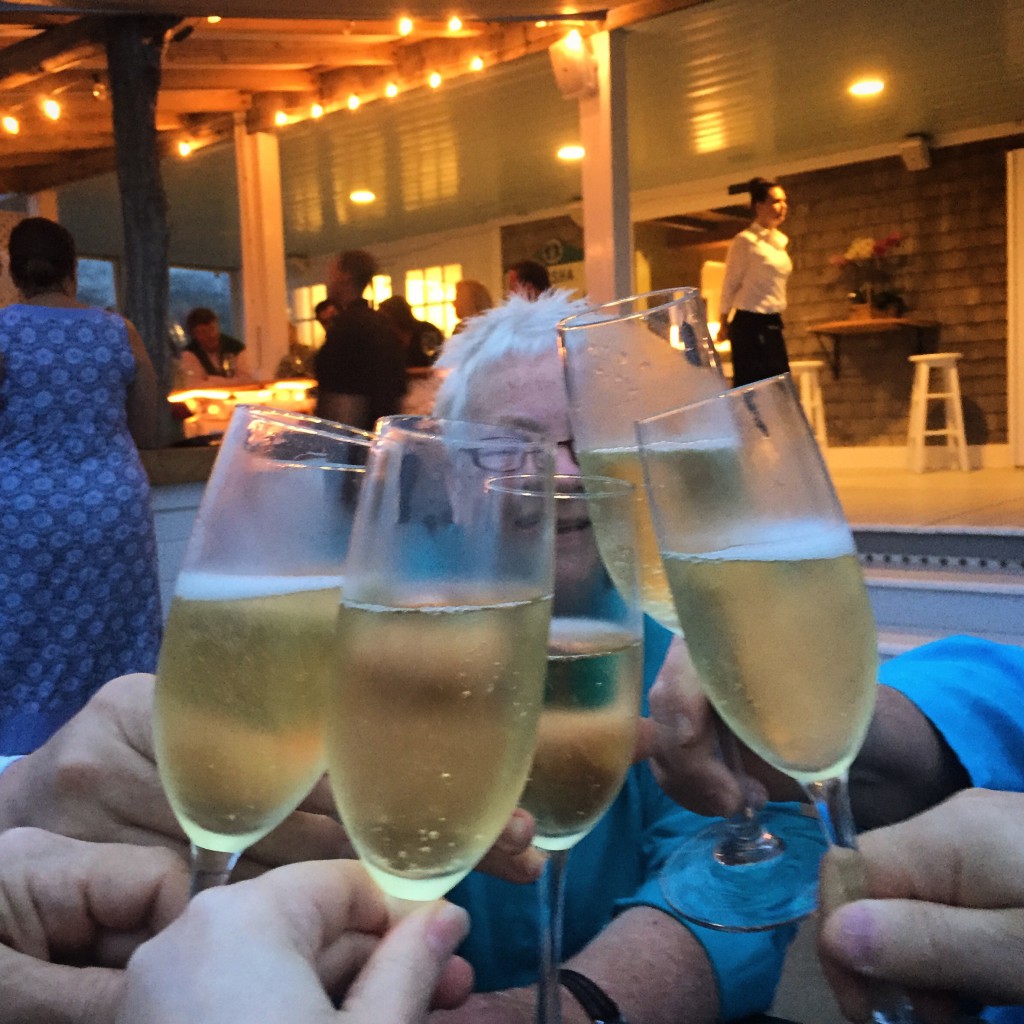 Celebrations began with a champagne toast

As with any proper celebration, we began with a champagne toast. It wasn’t about the premiere or the show, so much as to friendship, and the delight we all felt to be in each other’s company, a year after we first pointed a camera in Heather’s direction. 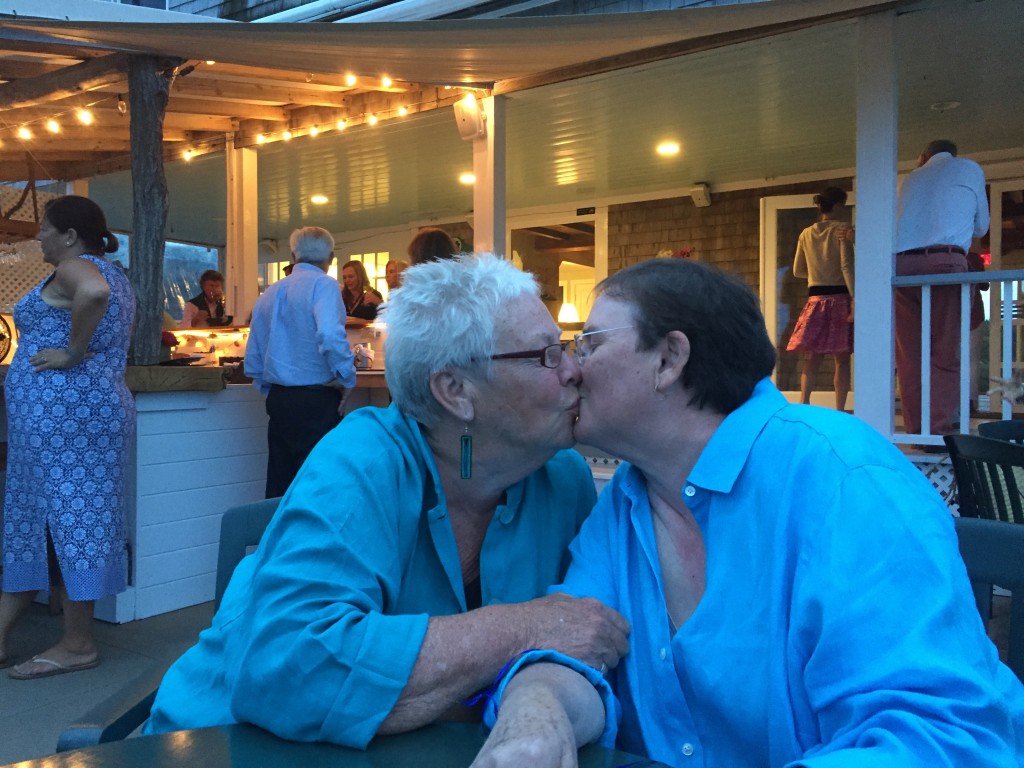 Heather and Pat, Happily Ever After

Dinner was delicious, and filled with hearty laughter. A few highlights included the most interesting intermezzo I’ve ever had (a tiny tuna tartar, with so many flavors I couldn’t name them by memory, but it was as refreshing and palate cleansing as any citrus sorbet). 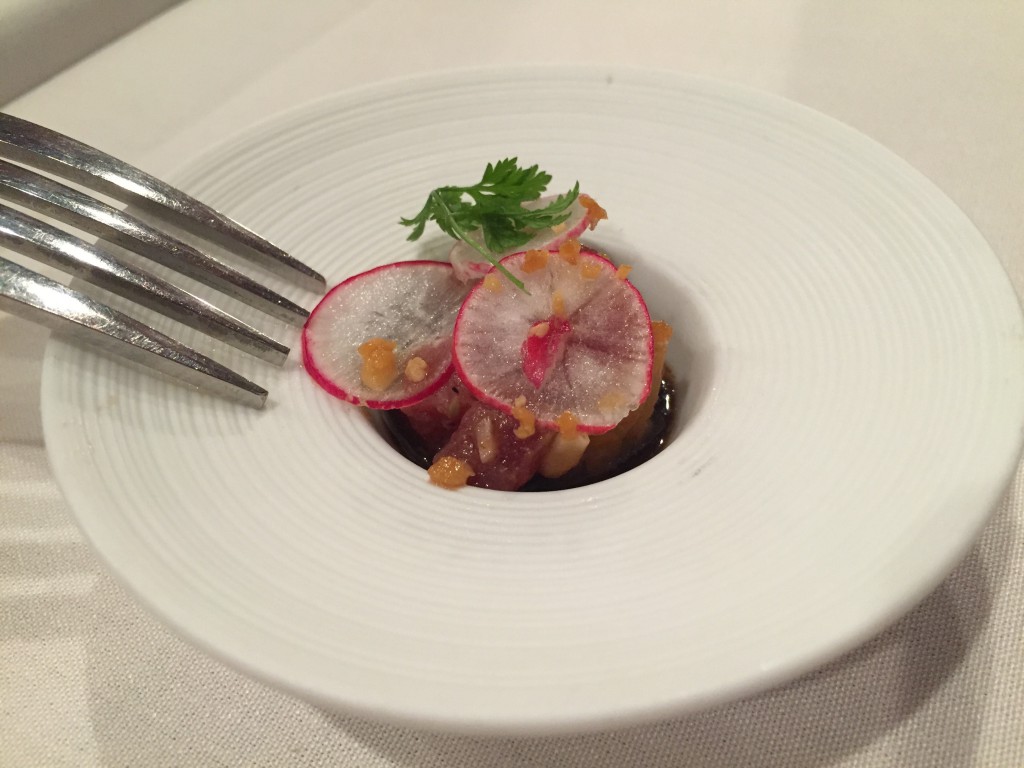 On the sillier side of things, it took me a while to realize that burning odor was coming from our very own table, where one of us had accidentally pushed the flowers too close to the flame of a nearby candle. Whoops. 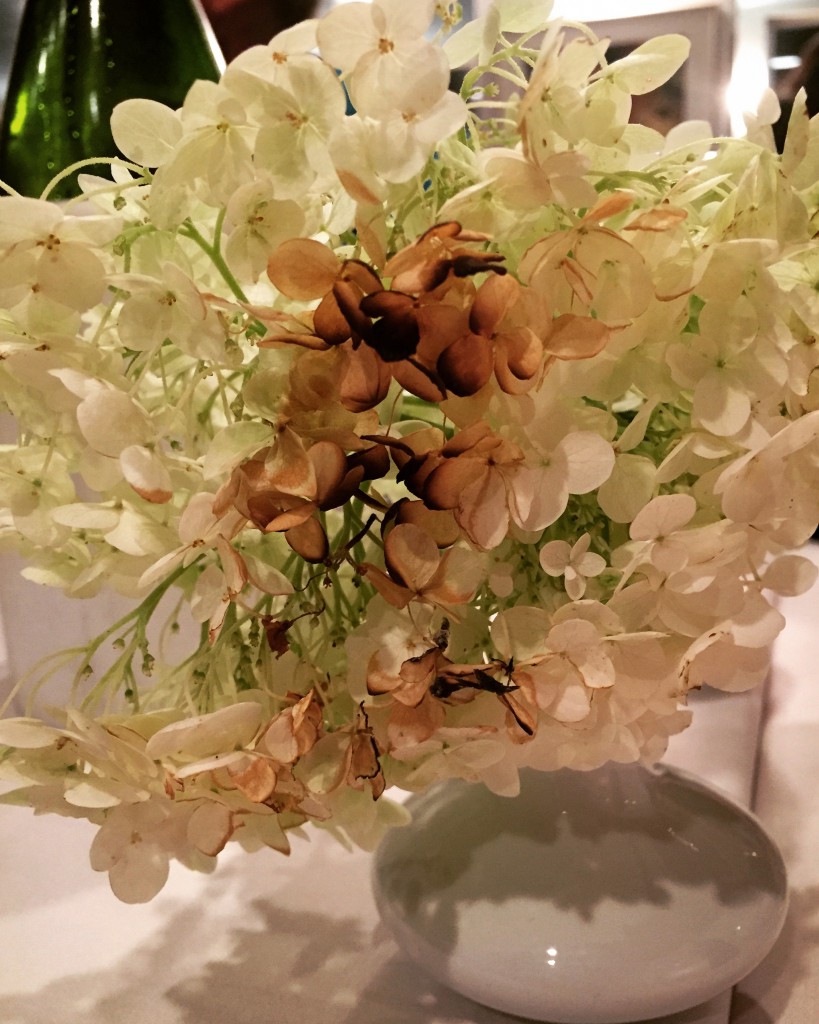 We would be on the island for another two weeks, but the first weekend was the most packed. On Saturday night, between the premiere on Friday and the exhibition on Sunday, David and I helped host a large family dinner party at his parents’ house. So needless to say, by the time our heads hit the pillow on Sunday night after the gallery show and this magnificent dinner (and enough wine to put a lazy smile on my face), we slept like the dead.

Stay tuned for Part 3, which will include some images from some of the island’s stunning locales.