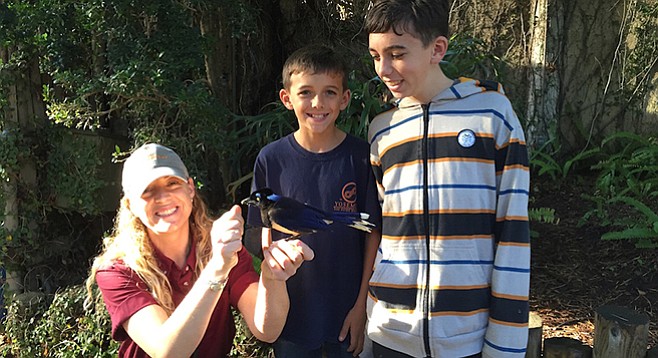 “Look!” I shouted to my friend Jenny, as I pulled the boys on either side of me closer to each hip. “I manifested children.”

Two older women who were passing by snickered; one of them smiled knowingly and said, “Strange how that happens.” Though it was trippy to think about, I realized I must have looked like a typical mom standing with her kids at the entrance to the San Diego Zoo Safari Park. But Jenny (recently back to work after giving birth to her second child) knew better. She laughed as she approached us, her hand already extended to introduce herself to my nephews.

My three sisters have provided me with six niephlings (four boys, two girls), ranging in ages from 2 to 12. Liam and Brian (12 and 10, respectively) were my companions for the day. I asked my sister Heather to let her boys play hooky from school so I could bring them with me while I conducted research for an article about birds. This way, I could get some dedicated quality time with them, while also obtaining a kid’s perspective for my story. Because I was offering the boys a rare opportunity to accompany their Aunt Barb behind the scenes, Heather — a teacher-turned-administrator — acquiesced to the absence.

It wasn’t until I arrived at their house that it occurred to me this would be my first time ever alone with them. I had a sudden awareness of the responsibility that had been handed to me, and made a mental note to drive slower than usual. I had planned to take them to an early lunch before heading over to the Safari Park, but I hadn’t thought of anything to fill the hour we had to kill before lunch. Fortunately, the boys were already working on a solution. I thought they’d been in their rooms getting ready while I was putzing around downstairs, checking email on my phone, but when I finally went to see what was taking them so long, I discovered them in Liam’s room, playing video games.

In an effort to engage me, Liam explained what was happening on his computer screen, and how he’d cleverly camouflaged his avatar as an office waste bin in his multi-player hide-and-seek game. I hopped onto the bed next to Brian, whose handheld device was emitting bleeps and bloops. When he saw me launching Thomas Was Alone, the game I was currently enjoying on my iPhone, Brian insisted I download another game called Geometry Dash. I did as he requested, and he excitedly gave me a tutorial. Cool Aunt Level: Unlocked.

Most of my niephlings are now at the same age I was when some of my sweetest and strongest memories were forged. Because of this, I assume they are particularly impressionable, and well, I want to make an impression, to reside forever in their brains, the way my own aunts occupy a special place in mine.

My sisters, cousins, and I used to have slumber parties at my Aunt Jane’s Brooklyn apartment, which was way better than staying at our grandparents’ place, because Aunt Jane had all the best board games and every pay channel. She’d take us to get slices of pizza and Italian ices, and then she’d coax us through the small kitchen window, out onto her “veranda,” where she could smoke while playing Yahtzee with us. I still occasionally hum one of the tunes Aunt Jane composed, the one she played on her piano, over and over, while I worked on the lyrics.

It was my Aunt Diane who introduced me to my Irish literary heritage, and Aunt Nelle who took me barhopping in Brooklyn Heights. When I think about it, I can conjure the musty scent of old photos in Aunt Diane’s many albums, just as I feel a tingle in my ear when I recall Aunt Nelle’s sandpaper voice spouting razor sharp observations of everyone on either side of each bar we visited.

The one thing all my influential aunts had in common was their lack of children. They didn’t have that imperceptible but unmistakable “mom voice” of all the other adult women I encountered. There was something mysterious about them, something that hinted to a young me that my life could be anything other than cookie-cutter. They spoke directly to me, not down at me. They treated me like an adult, which made me want nothing more than to be one. But not just any adult — I wanted to be an eccentric aunt, just like them. And now was my chance.

I struggled to decide where to take the boys for lunch, especially because I was unfamiliar with all of the restaurants in their neighborhood. I wanted to expose them to food they hadn’t yet tried but were likely to enjoy. In the end, I settled on Indian — it may seem exotic, but chicken and rice is kid-food in any language.

I busted out my sonic screwdriver (a replica of the tool used by the TV alien known as Doctor Who) and the three of us theorized which settings the Doctor himself could use for which purpose. On the way to Safari Park, we blasted Skrillex (turns out dubstep is another enthusiasm we share).

After all the bird stuff (including a fast-paced, awe-inspiring bird show), we took some time to hang out with the lemurs and catch the Cheetah Run. While waiting in the sun for the Cheetah to demonstrate its infamous speed, Brian asked me why I was wearing all black. “Because I like it,” I replied.

“You’re weird,” Brian said. And this lovely little comment led to my favorite part of the day, the part where I got to demonstrate my infamous eccentricity, and leave my own Aunty imprint on my nephews’ brains.

“That’s right, I am weird,” I said. “And I take that as a wonderful compliment. Because you know what? When I meet someone who is normal, all I can think is, how uninteresting. I’d rather be me, and be weird, and be interesting.”

I gathered from the way they fell silent and leaned into me, that they kind of liked having a weird aunt.