Tales from the Vineyard Part 3: Finally, a bit of vacation 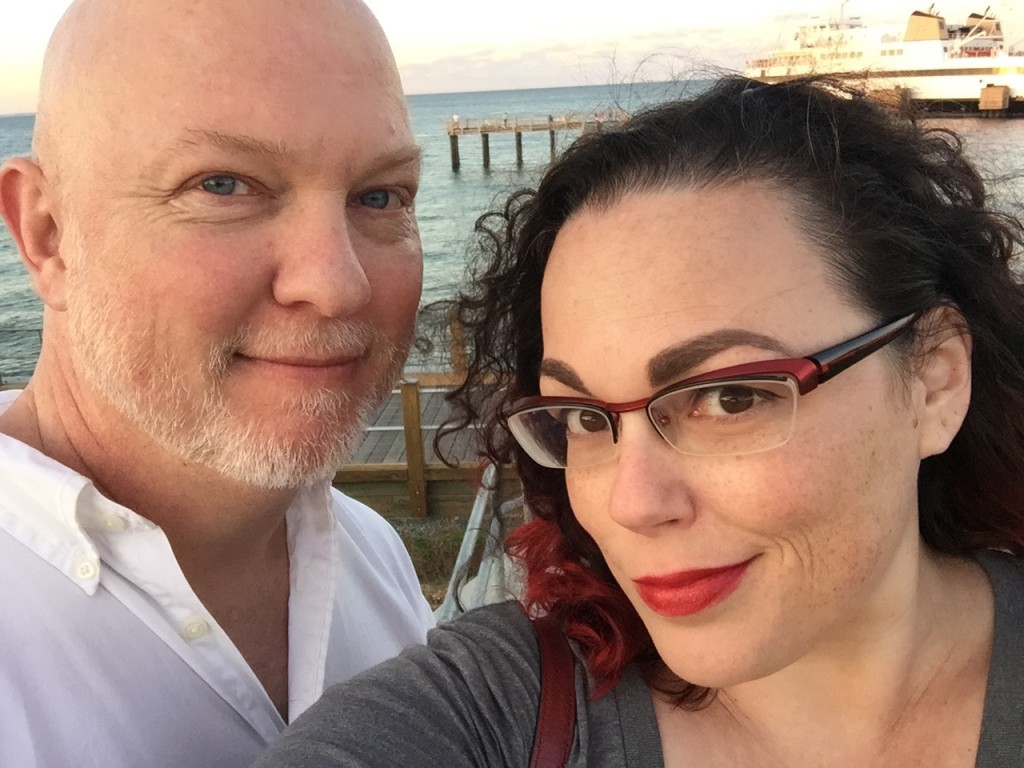 After we returned home from the island, a few friends and family members joked that we probably needed a “vacation from our vacation.” To which I said, in a serious tone, “That was not a vacation.” Sure, we had some fun — we always do. But when I think of “vacation,” I think “leisure.” I think “books and puzzles and long walks on the beach or in the woods.” The week that followed the big premiere (which was fun, but work) and David’s show (also fun, but also work) was PACKED with visits. Don’t get me wrong: we love to see friends and family. But that is not the same as “down time.” It’s just not. At least, not for me. I may be energetic and bubbly whenever people are around, but the truth is, inside, I’m constantly anxious around pretty much anyone who isn’t David. I’m wondering if I’m saying the right thing, if what I’m saying is being interpreted the way I intend. As much as I love my in-laws, I worry about the ways in which they might be judging me. I worry that they might think I’m judging them. 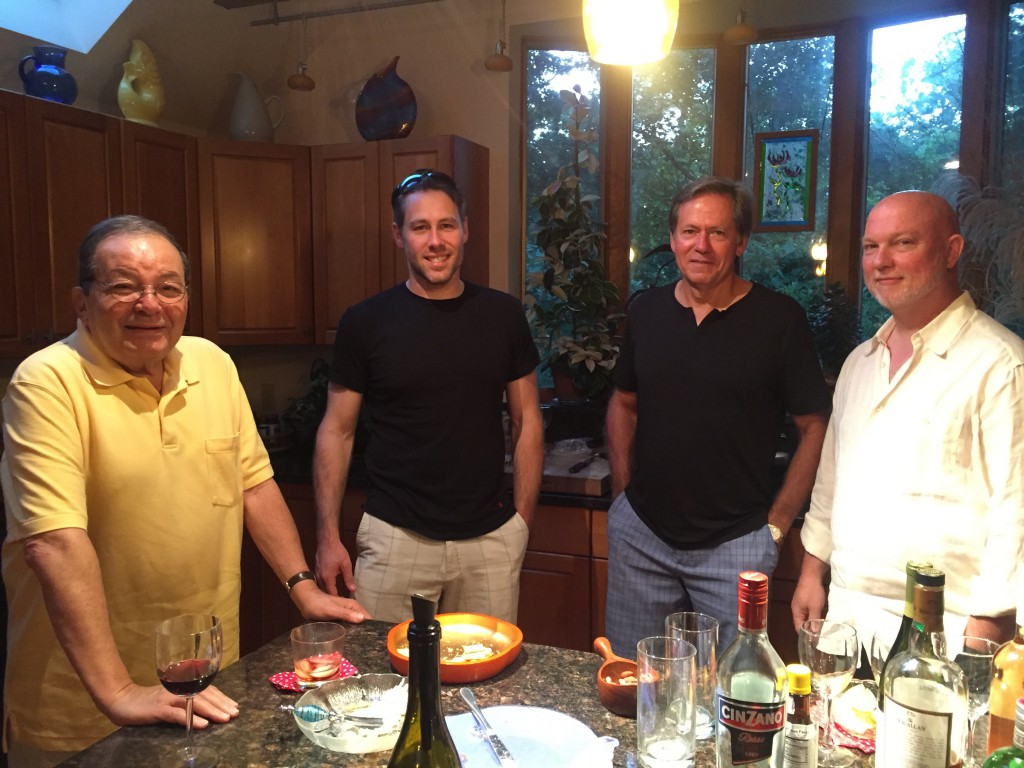 Some men in the family, clearly judging me judging them

Basically, as much as I’m energized by people, as much as I thrive on holding court, the flip side is that if I do it enough in a week, I’m EXHAUSTED. My brain doesn’t leave me alone, it’s always spinning, and it spins ten times as fast for each additional person in the room. So, there’s that. I just needed to say it. BUT, though this wasn’t a “vacation” in the way that I would define one, the tail end of our visit was much more relaxing, and we had a few days that were more vacation-esque than the rest of the trip, as you will see in the following onslaught of vacation photos. Here, I detail the highlights at the end of our visit, including playing tour guide (a role I love) to my Aunts Diane and Susan, and, if I’m being honest, the highlight of my summer: a boat ride with an adorable dog. But first, check out this weird old parking meter we found in the woods. 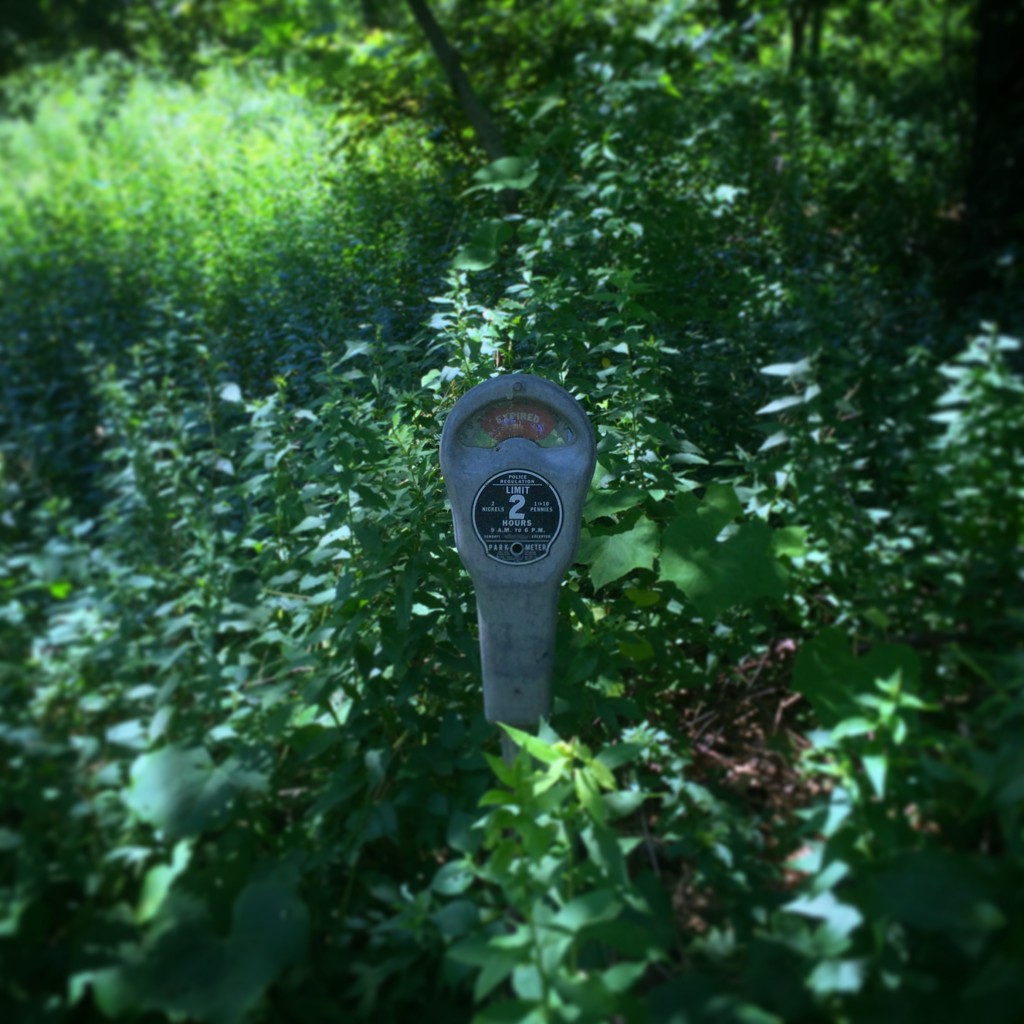 On our way to a friend’s house, we passed by this relic

The ferry from New York City to Martha’s Vineyard is a new thing. It’s like a 5 or 6 hour ride, but Aunt Diane and Susan, like me, enjoy the “travel” part of traveling as much as the “getting there” part. Because most of our friends on the island either live there, or have been visiting at least as long, we rarely get the opportunity to play tour guide. The last time was a few years ago, when our friends Bill and Jane visited in the optimal month of October (when the weather is perfect, it’s not crowded but most of the stores are still open, and the leaves are changing color, making the landscape look like fire and water). 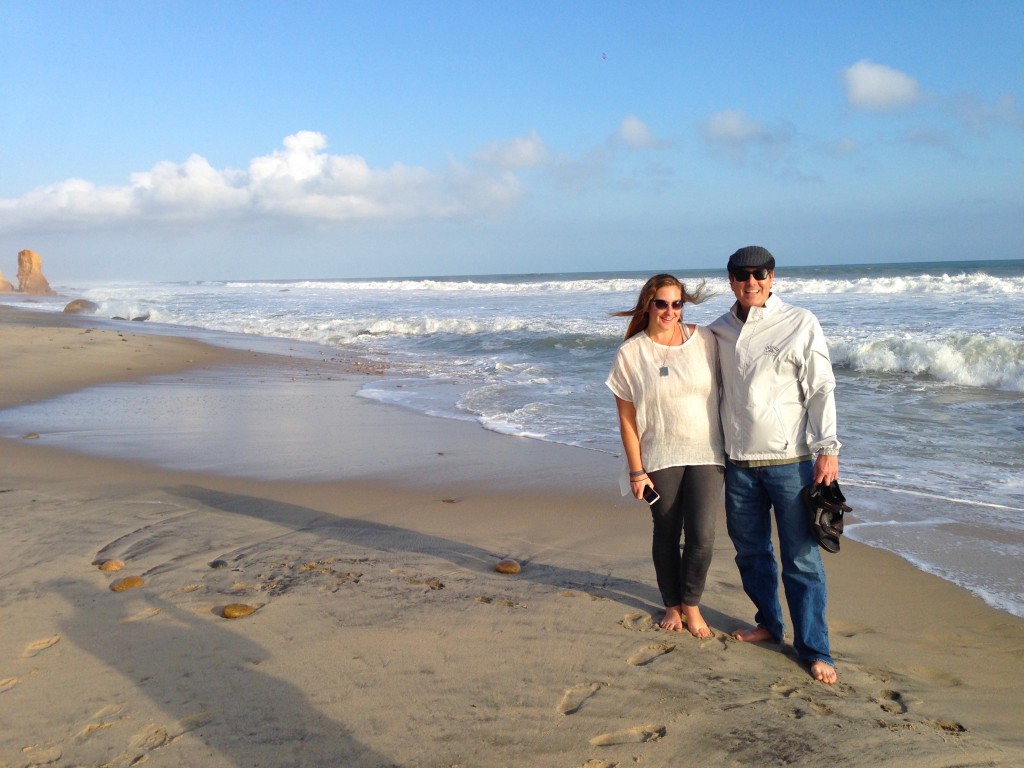 Bill and Jane on Lucy Vincent Beach in October 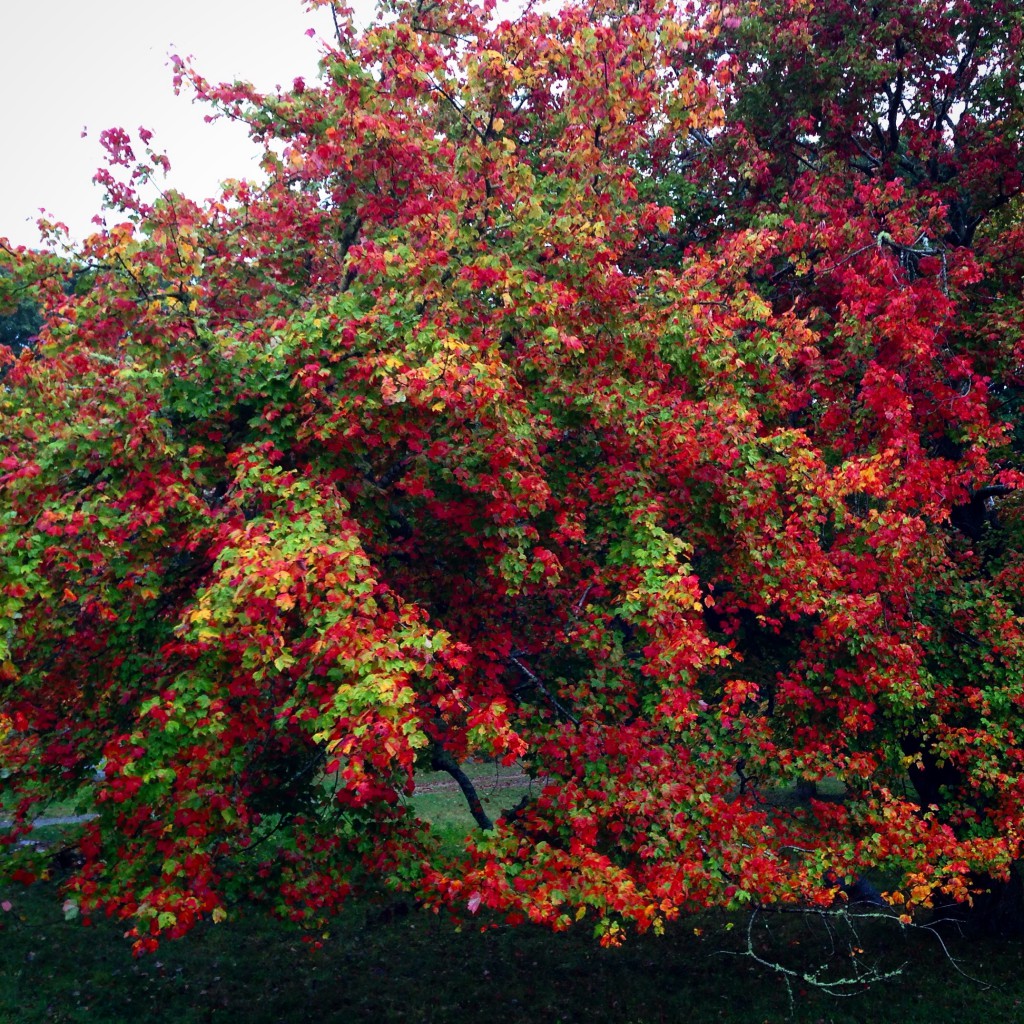 The leaves changing color in October on the Vineyard

My aunts arrived on a Friday night, and we set out first thing on Saturday morning to show them around, and take them to some of our favorite spots. 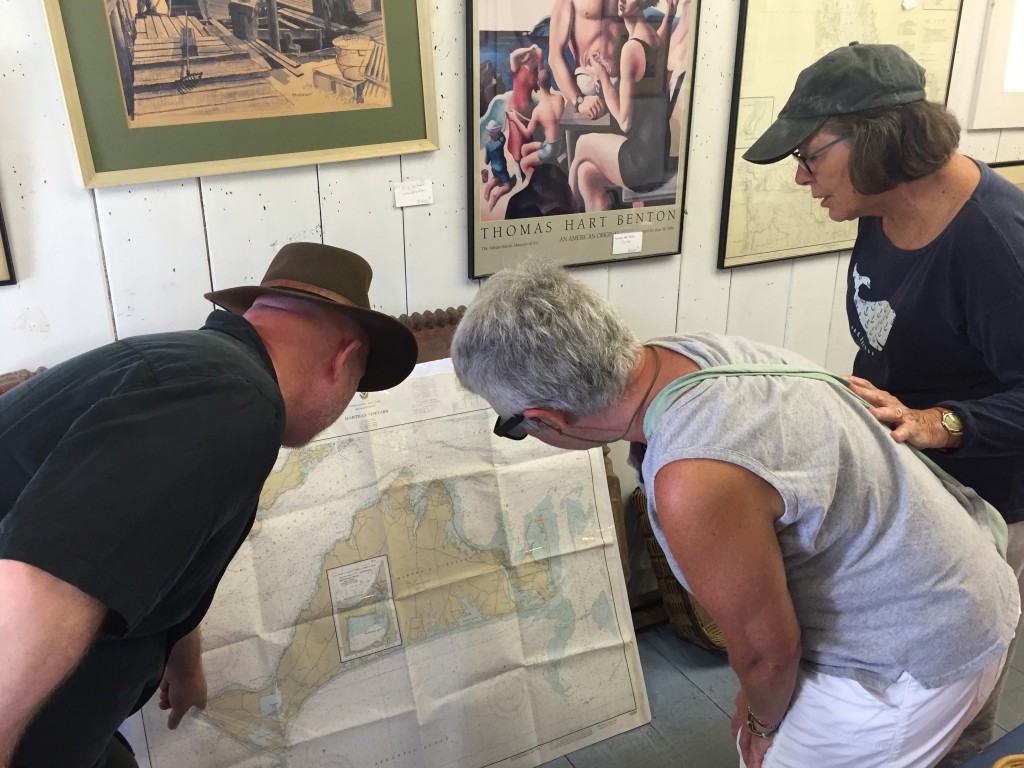 We stopped for drinks and bites, ending with dinner at Détente. The day was HOT, so we dipped our feet in the water when the chance arose. And after dinner, just after dusk, we went to the beach to feel our toes in the sand. 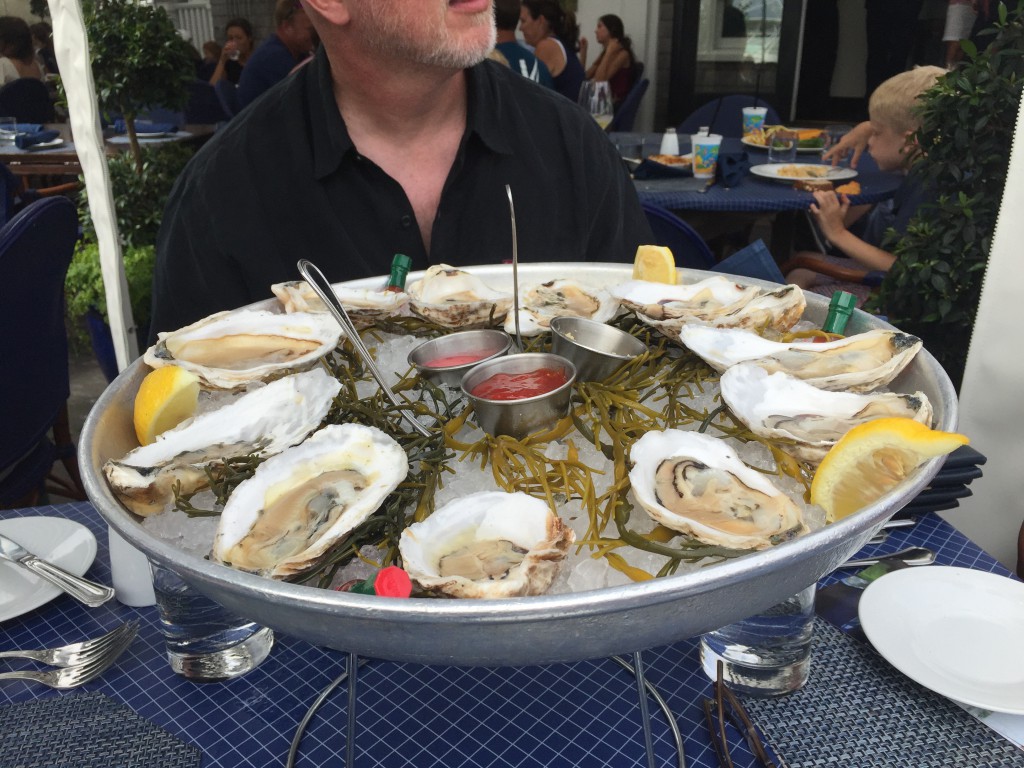 Oysters at the Atlantic 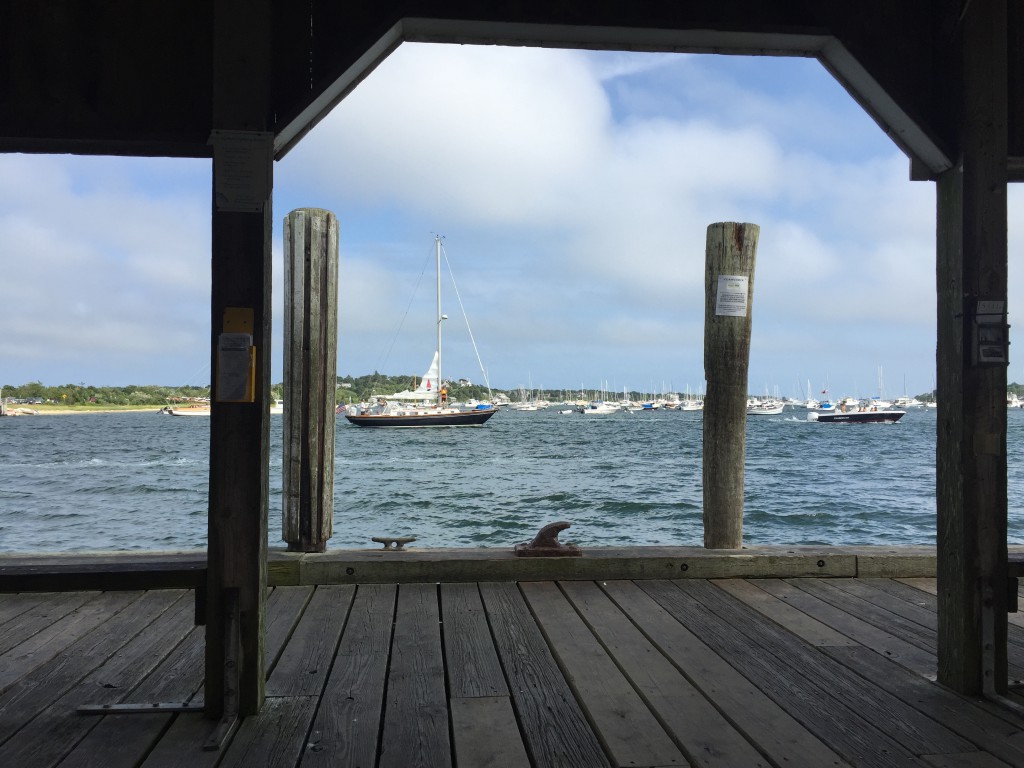 Aunt Diane and I took a break in the shade to share deep thoughts, this was our view 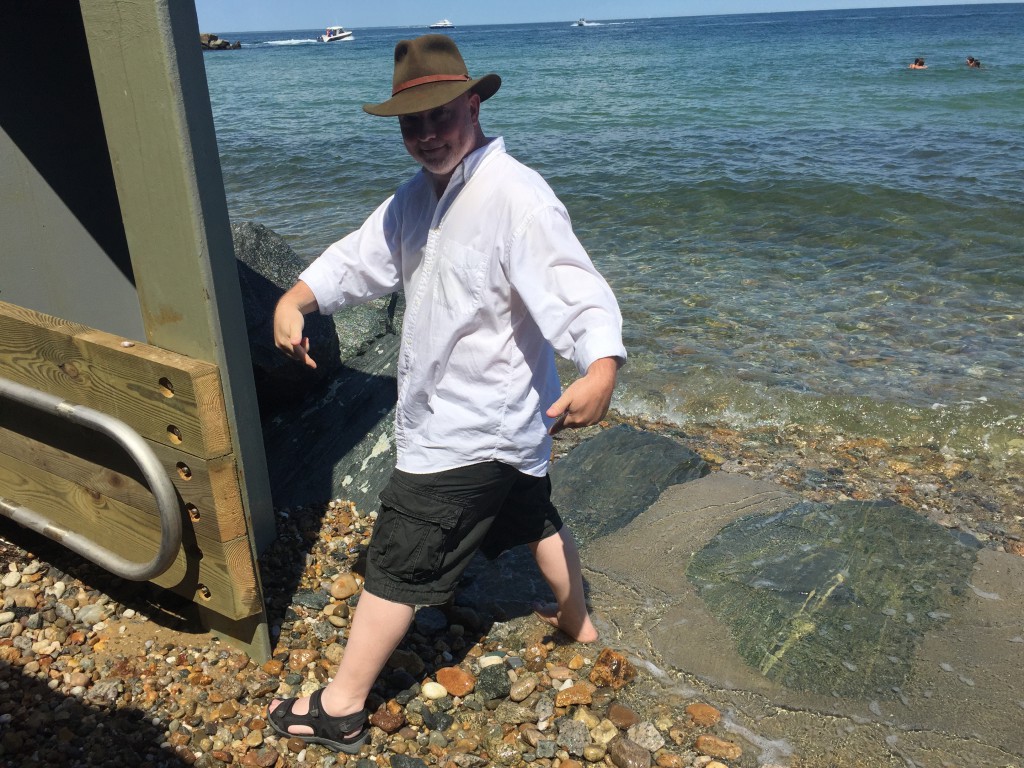 David sets a daring foot in the ocean 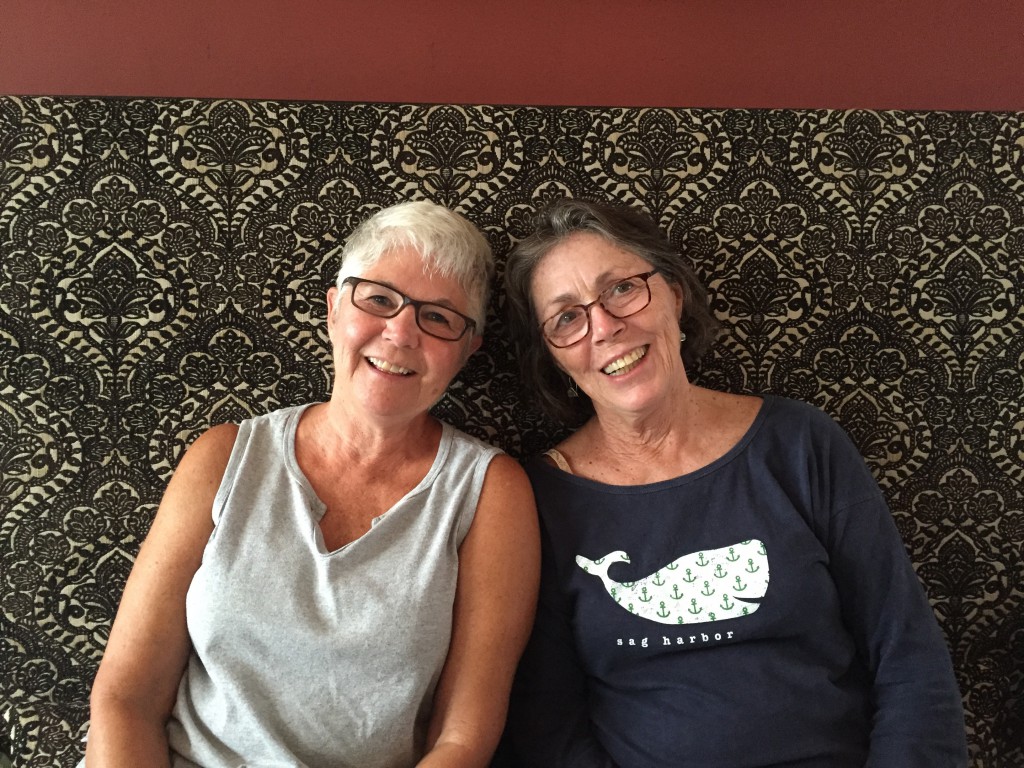 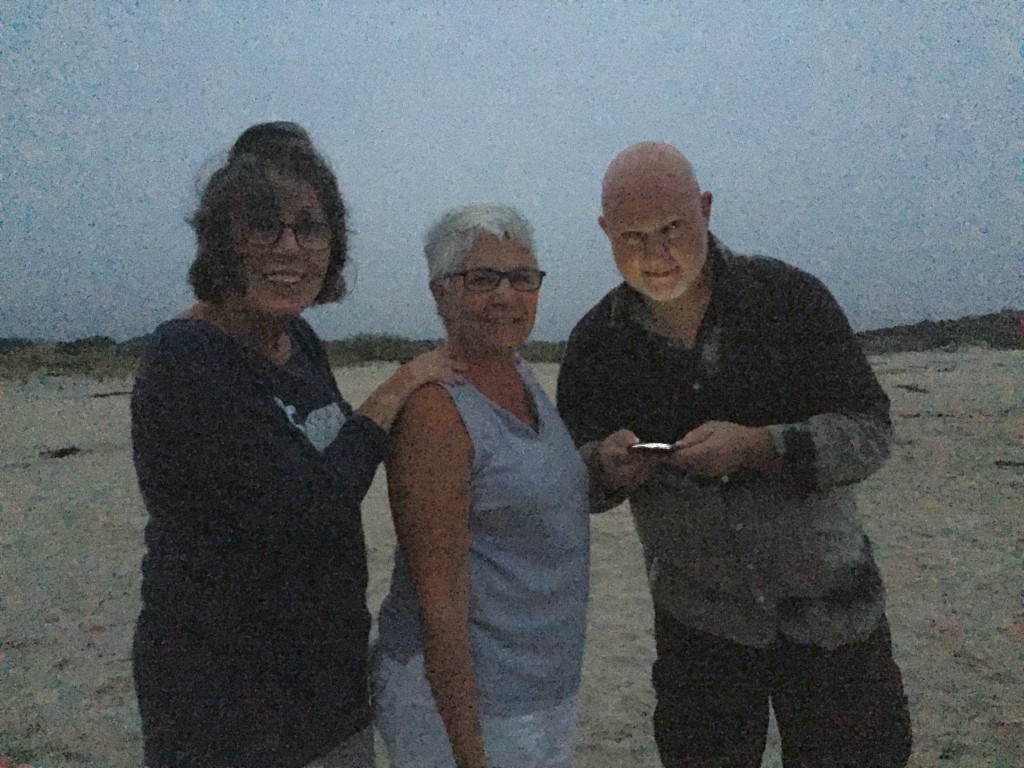 A grainy pic on the beach, because it was super dark, and the moon was obscured by clouds 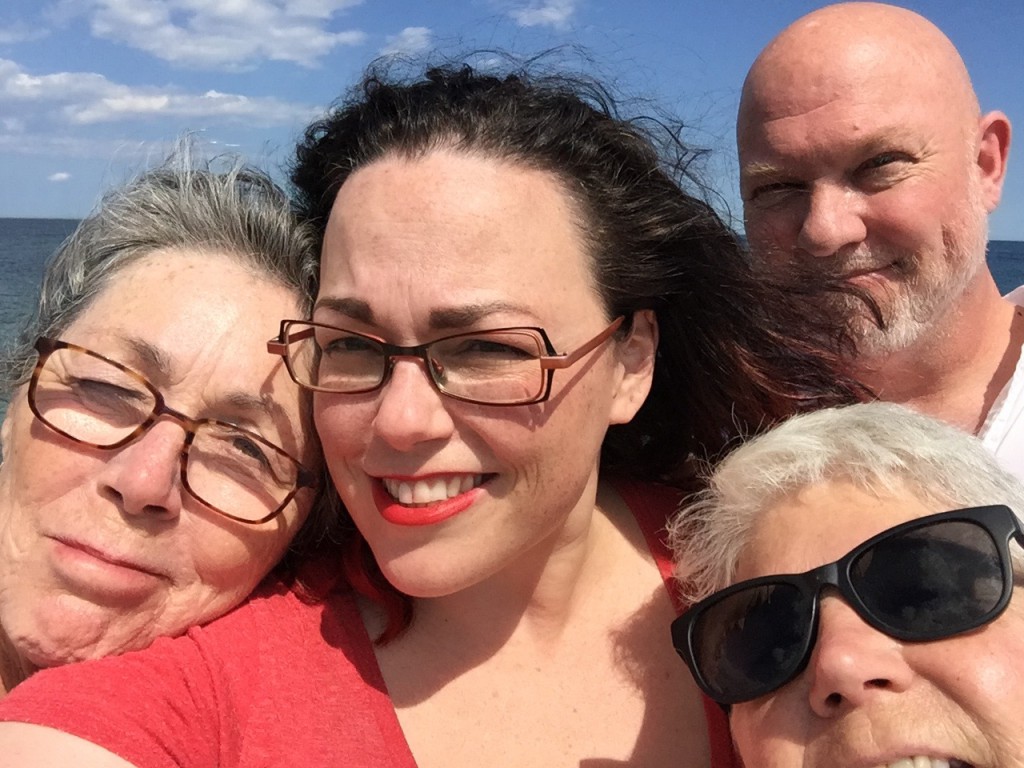 It was a lovely visit, filled with sight-seeing, which meant I got to go to all corners of the island and share my special places. We laughed, we talked, we talked some more, and we never stopped talking, until we had to say goodbye on Sunday. Aunt Diane and Susan fell in love with the island, and constantly noted the differences between the rural Vineyard and the more built-out Hamptons. I’m pretty sure they’ll be back, and we’re looking forward to that day, because one and a half days is not nearly enough time to experience what Martha’s Vineyard has to offer.

We went straight from the docks in Oak Bluffs to meet up with our friend Adam, an art historian, writer, and all-around cool dude. 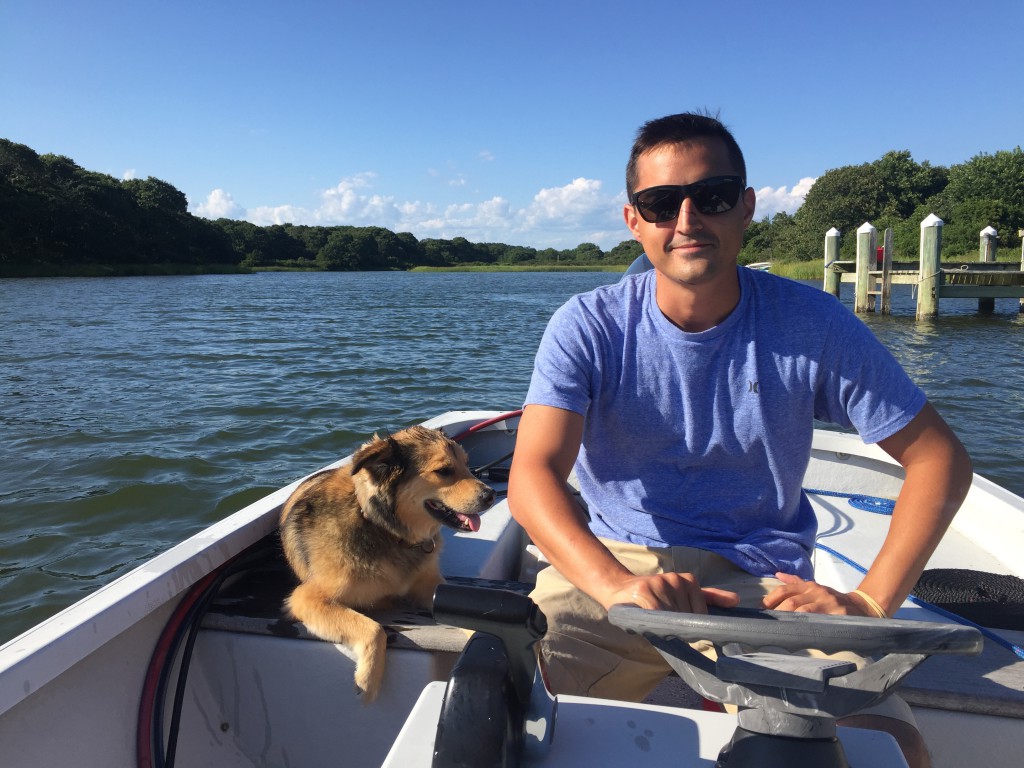 Adam, looking chill af in a boat with his awesome dog, Rory

I couldn’t get over the fact that I’d been visiting the island for nearly 14 years and had NEVER been on a boat in the surrounding waters (aside from the ferry). Adam sought to rectify this, by giving us a ride across Oyster Pond to a gorgeous private beach. In the summer, it’s rare to see a stretch of sand without people on it, especially on a hot, sunny day. The experience was otherworldly, in the best sort of way. 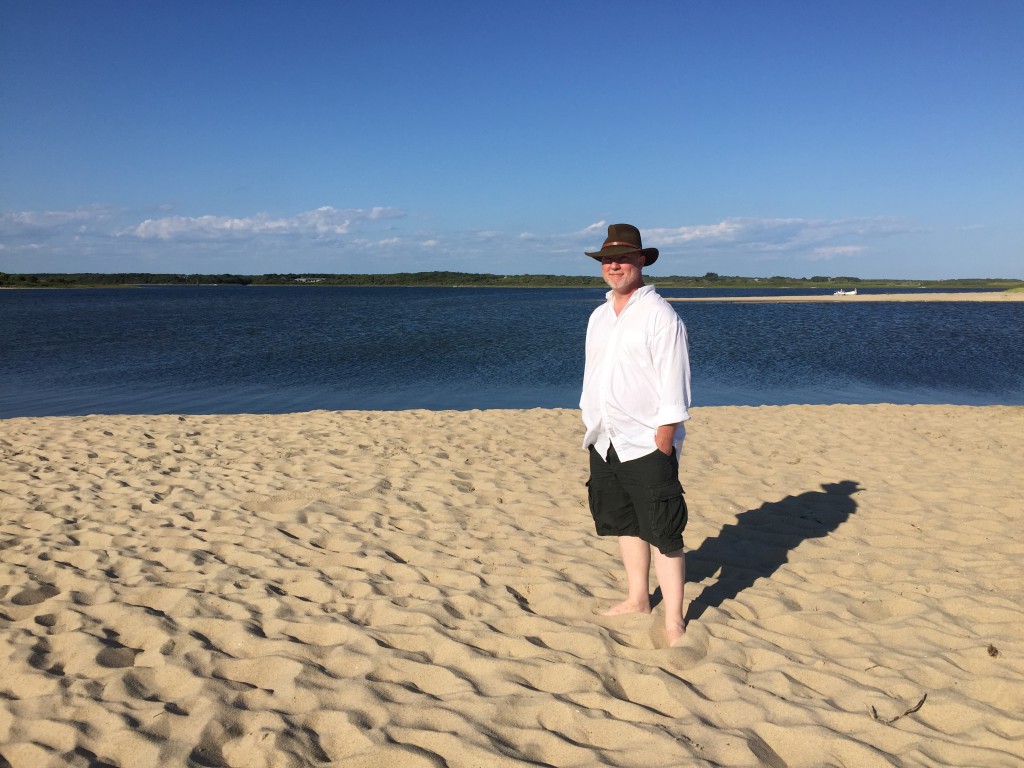 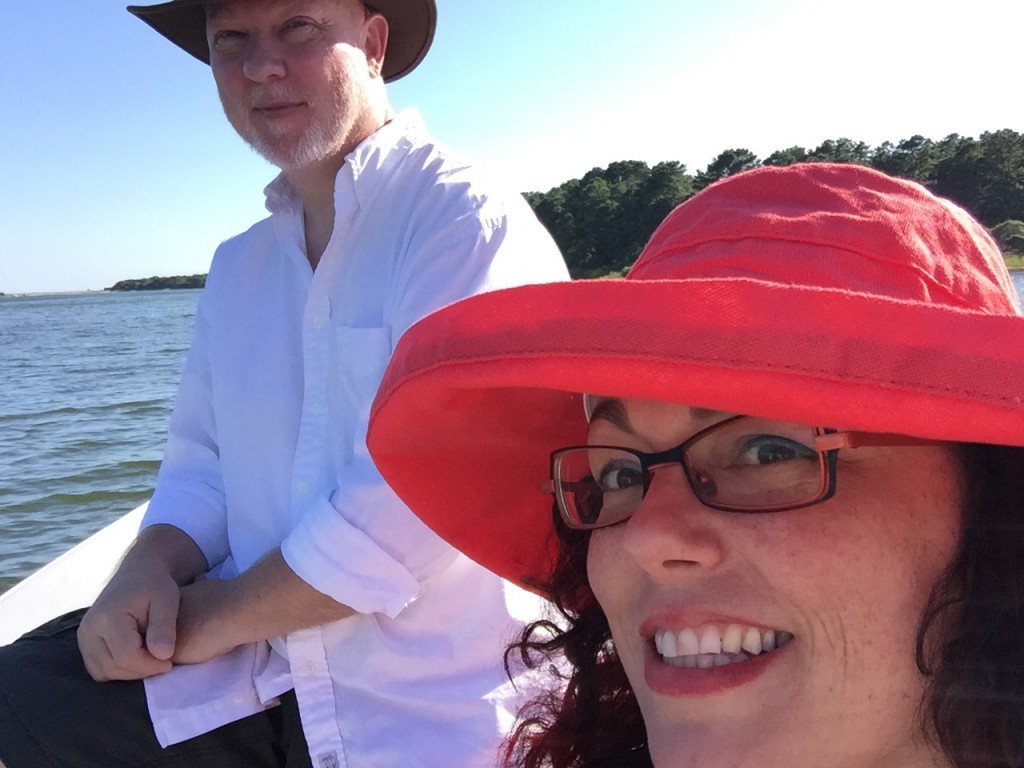 On the boat: I’m glad I bought this hat right before the trek, that sun was harsh! 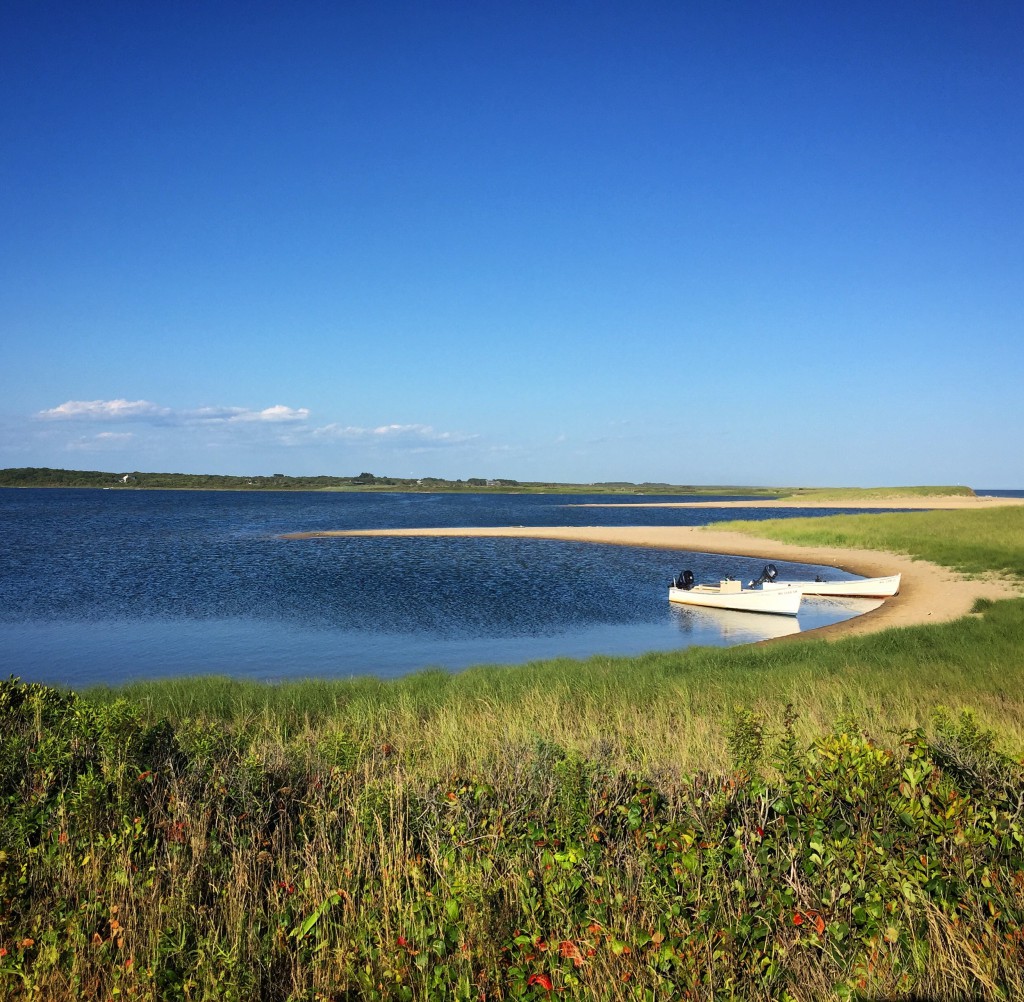 We arrived to this shore via one of those boats, and walked along the beach side to this point.

I love the water, and being on this small boat, so close to it, was a special experience. Coupled with good conversation and the presence of a sweet pup, and I was in heaven. It wasn’t long, but it was delightful. When we’re back in November, I plan to spend more time on boats. 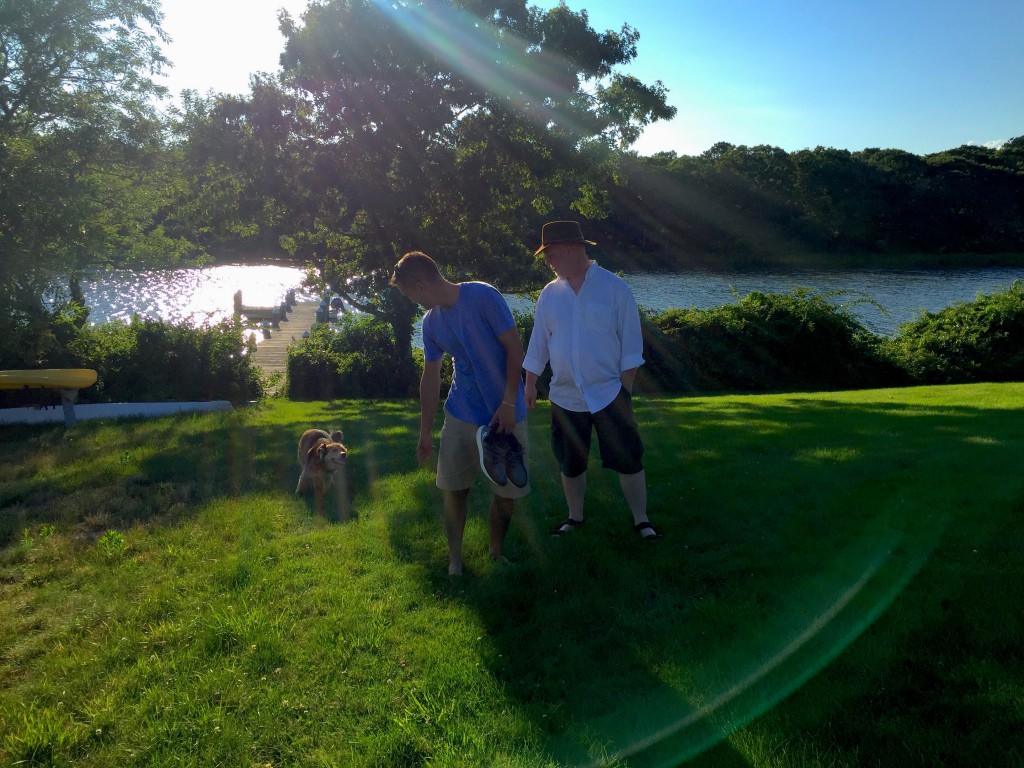 Walking back up the grassy hill after our boat ride

And that’s a wrap! At least of the highlights of this most recent trip to the island. We’ll be back for nearly a MONTH later this year, and I expect to have much more to share.