Bedeviled by the details 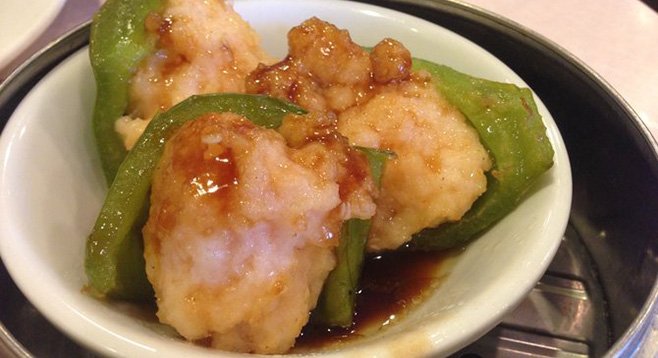 The closest San Diego comes to having a “China Town” is the stretched out expanse of cold, industrial Convoy Street in Kearny Mesa. The mile-long stretch of pedestrian-unfriendly road is home to nearly 100 Korean, Vietnamese, Thai, Japanese, Taiwanese, Chinese, and other Asian-fusion restaurants. David says one of these years, he’s going to embark on a project to dine at every single one of them. In the meantime, he settles for hitting up our haunts (Tofu House, Tajima, Yakyudori, Emerald, Dumpling Inn) and occasionally branching out to try something new. On a recent day of errand-running, we craved some Chinese, we opted for something new and found ourselves pulling up in front of Imperial Mandarin.

As with most other joints in this area, Imperial Mandarin is unassuming and tucked away inside one of the many storefronts in an endless spattering of strip malls. It was just past the lunch hour, so we were the only ones in the restaurant, save for a man who was waiting for his pickup order. Google describes the restaurant as an “unpretentious Chinese restaurant offering a seafood-heavy menu and daily lunchtime dim sum.” It was the dim sum that drew us in, but I couldn’t help but muse over the word “unpretentious” as we took our first look around and spied the dated wood paneling and pink linoleum tables. Quaint and cluttered, it was a quintessential hole in the wall, in the way some of my Convoy haunts had been before they put some money into updating their interiors.

But we weren’t there for the décor, we wanted the dim sum. Because he spotted it on the menu, David and I began with one of his classic favorites, the sizzling rice soup. Though we were happy with the flavor and texture of the shrimp, chicken, and snap peas, the broth itself was bland like boiled water. A generous helping of salt and red pepper sauce helped.

I wanted to try something I’d never noticed on other dim sum menus, and that was the deep fried sesame seed shrimp toast. The first bite was pleasantly crunchy, but a moment later it became apparent that the bread had served as a sponge, and soaked up all the oil from the fryer it could hold, which left a nasty, unctuous aftertaste in the mouth. We promptly scraped the shrimp from the bread, and ate it by itself, which was a much better experience.

The gyoza was great in that “things I crave when I’m drunk” sort of way, with its thick, doughy coating, crisped on one side and nice and chewy throughout. Though it was tasty, it didn’t have that “made in house” quality. I’m guessing a good portion of the dim sum was obtained frozen through Cholimex, or a similar supplier, as with many other dim sum restaurants (save for Dumpling Inn, which in my estimation is the bestest and freshest Chinese food to be had on the block).

I enjoyed the bell pepper stuffed with shrimp and pork. The pepper was juicy and crunchy, indicating its freshness, which was refreshing on the heels of the gyoza. Whatever that is on the fortune cookie, which was missing its other side.

Though the service was prompt and civil (I wouldn’t go so far as to say “friendly”), it’s the little things that threw us off. I know it’s a nearly irrelevant quibble, but David’s fortune cookie was not only broken and missing a piece, but on the back, there were all these black spots that kind of looked like mold, or dirt. He didn’t eat his. I took a nibble of mine, just to see, and confirmed that it was stale. And let’s talk about the crazy women’s bathroom at Imperial Mandarin. In this odd, large L-shaped room are two toilets, one facing the other. No separation between the two toilets. The handle on the door was broken, but a makeshift lock had been added, thus protecting me and my two toilets from the rest of the world. Both toilets turned out to be unusable; they were filled with tissue, and the water was up to the brim of each seat. After taking a long, dubious look at the set up, I decided I could hold it.

Just as stains on an airplane’s tray tables make one question whether the airline is doing their engine maintenance, the state of the bathroom made me not want to think about what was going on in the kitchen. A broken handle, clogged toilets, stale moldy cookies: to me, these are signs that the owners here don’t care very much about the details — things most of us don’t notice when they’re done right, but are incapable of ignoring when they’re done wrong.

Overall, this is not great Chinese food. It’s good enough, and can be satisfying in the same way a late night trip to Taco Bell can be. No one would suggest that Taco Bell is the highest expression of Mexican cuisine, but sometimes you’re just in the mood for a Gordita.