Beauties and Beasts at MoPA 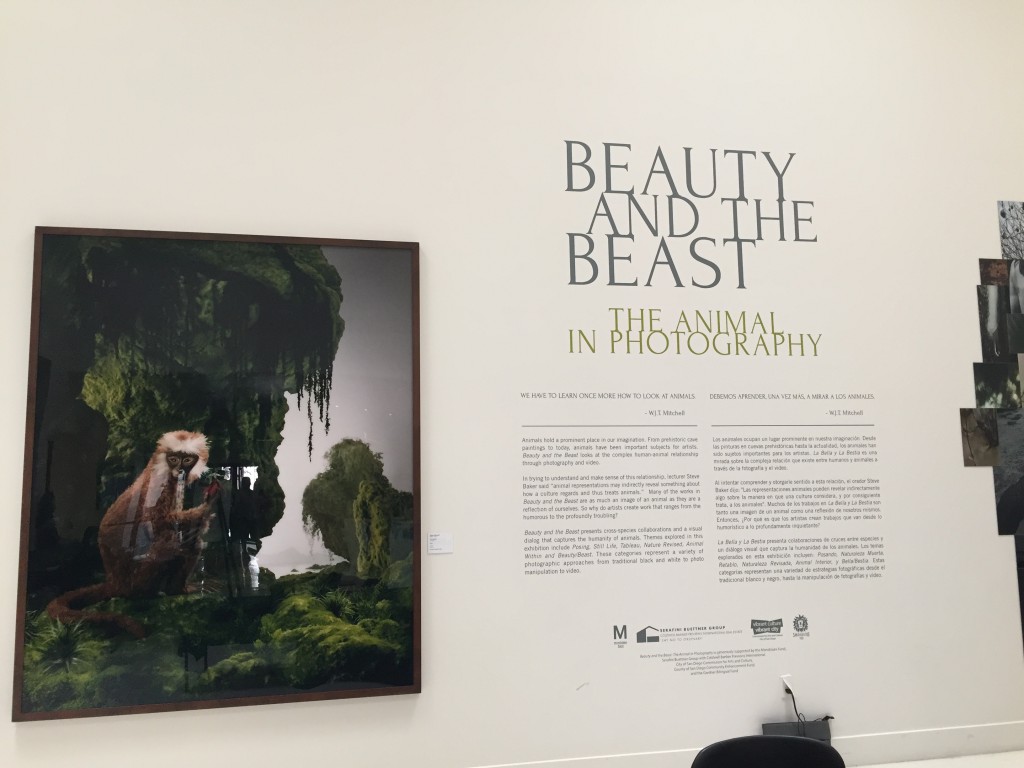 In the atrium at the Museum of Photographic Arts

It was Rosa who suggested we check out the show. At first I was hesitant: I hadn’t been to MoPA in years, and the last few shows I’d seen had been all about the history of photography, whereas I’m more interested in contemporary photographic artwork. Not to say I haven’t found that there — I still remember the phenomenal installation-filled exhibition of Robert and Shanna ParkeHarrison’s show, The Architect’s Brother. That was in 2004, the same year David’s work was exhibited in the museum’s atrium. 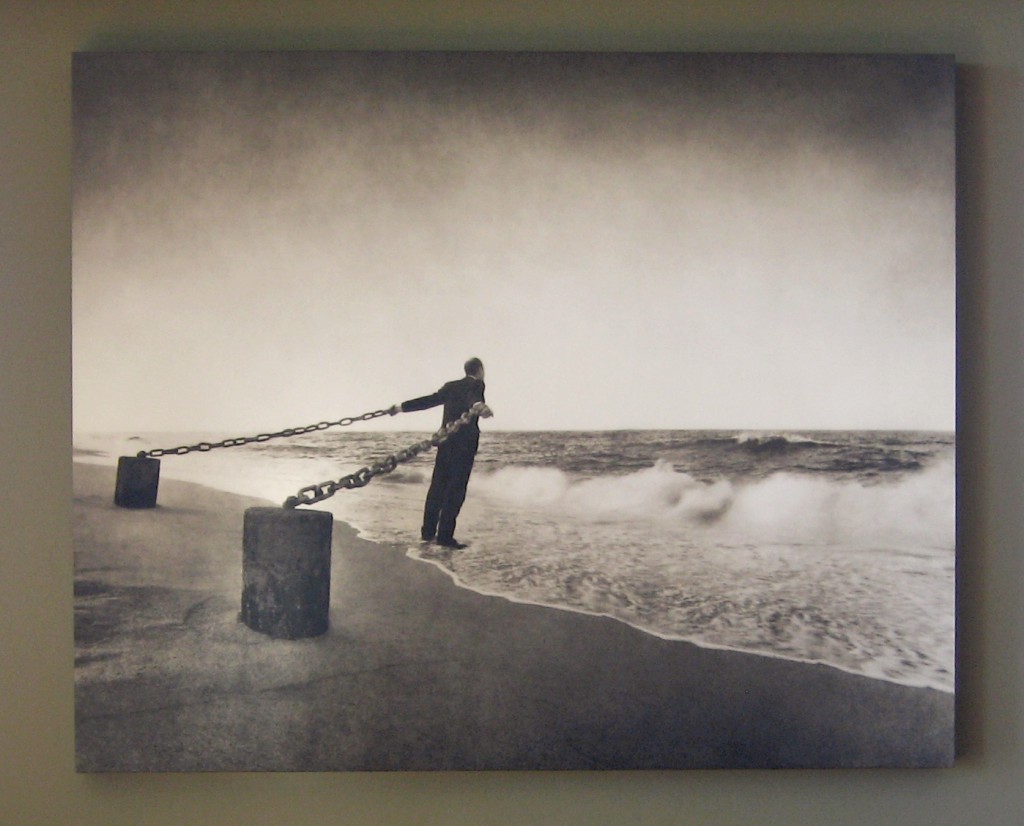 Low Tide, the image from ParkeHarrison’s The Architect’s Brother exhibition that we own

Since then — aside from a handful of exceptions — I couldn’t shake the feeling that all the big donors had boners for history and process, or documentary and commentary, more than contemporary art. Which is all well and good, but I don’t want to see the world’s oldest photo as much as I want to be introduced to the latest artistic interpretation of the medium. But now I’m getting all art-speaky, so let’s drop it there and leave it at, I hadn’t been interested in checking out a show at MoPA for a while. But it seems there was a lot I’d been missing, as Rosa would inform me, and this Beauty and the Beast show was the perfect exhibition to bring me back into the fold. 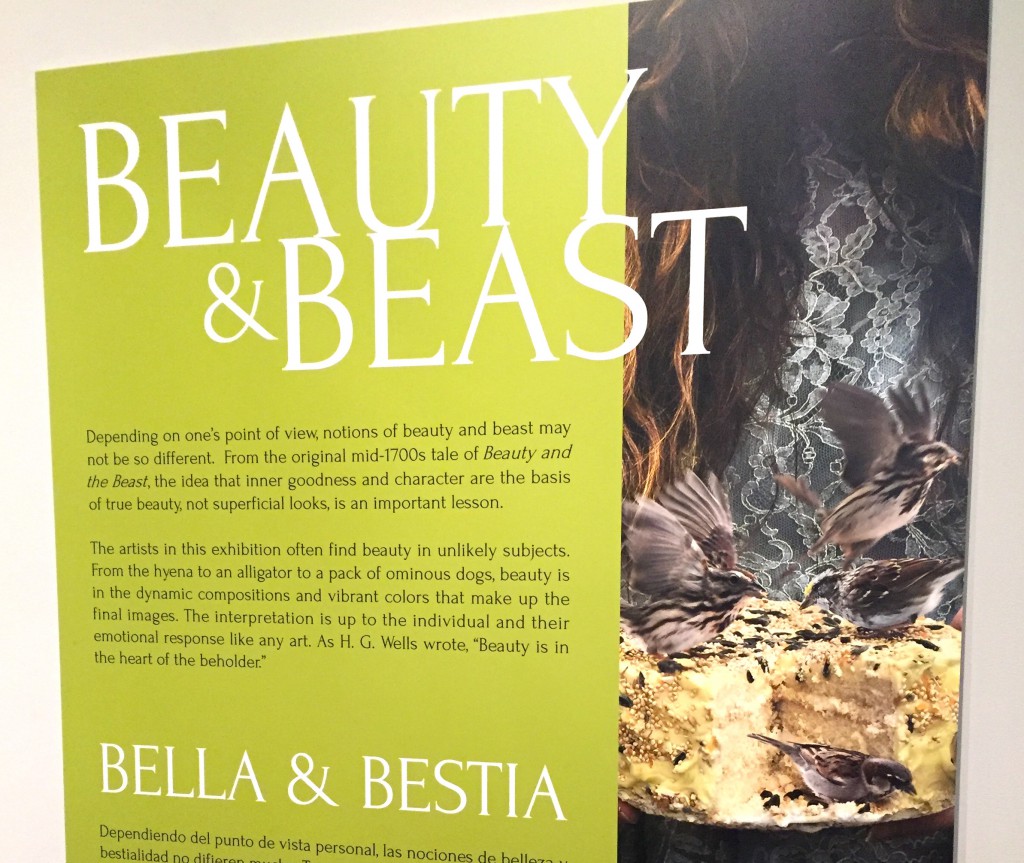 One of my favorite parts of the exhibit were the video-art pieces. I love seeing new technologies being embraced by artists. Some of the ever-so-slightly moving still life pieces reminded me of the Geisha video art by Gerald Forster that David and I snatched up at Photo LA in 2007. Tech has advanced a lot in the decade since, and these pieces at MoPA were displayed in frames that were much flatter than our beautiful, but still clunky container (the only kind that effectively contained the DVD player within). 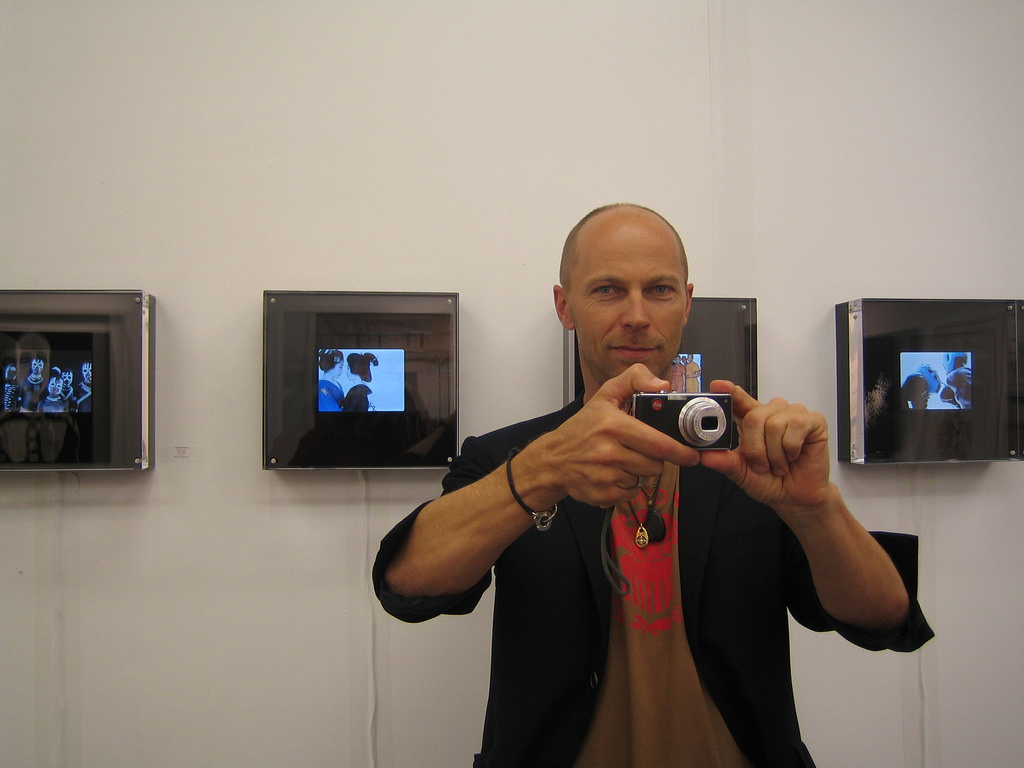 Artist Gerald Forster standing in front of our Geisha piece, photo by me 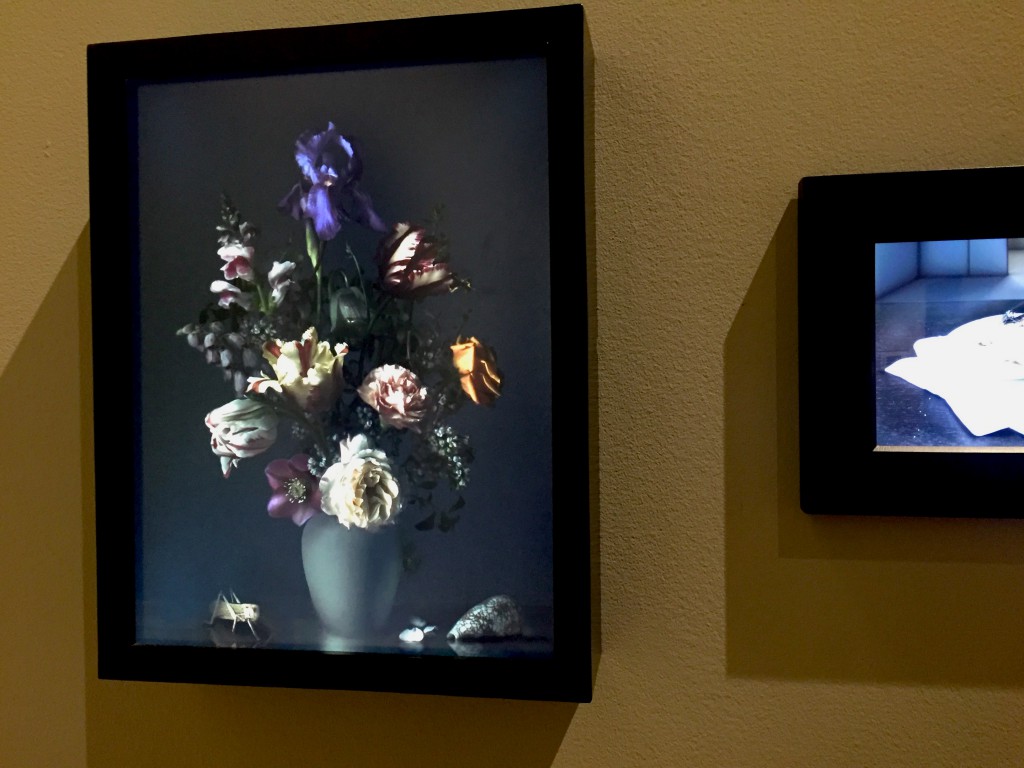 We enjoyed the interactive aspects of the show, though we could not for the life of us figure out just how far to hold those goggles in front of our faces to see the anticipated visual effect. Here you can see Kimberly trying. Rosa gave it a go, but it quickly hurt her head. I almost saw the 3D effect I presume was intended, but it wasn’t easy. 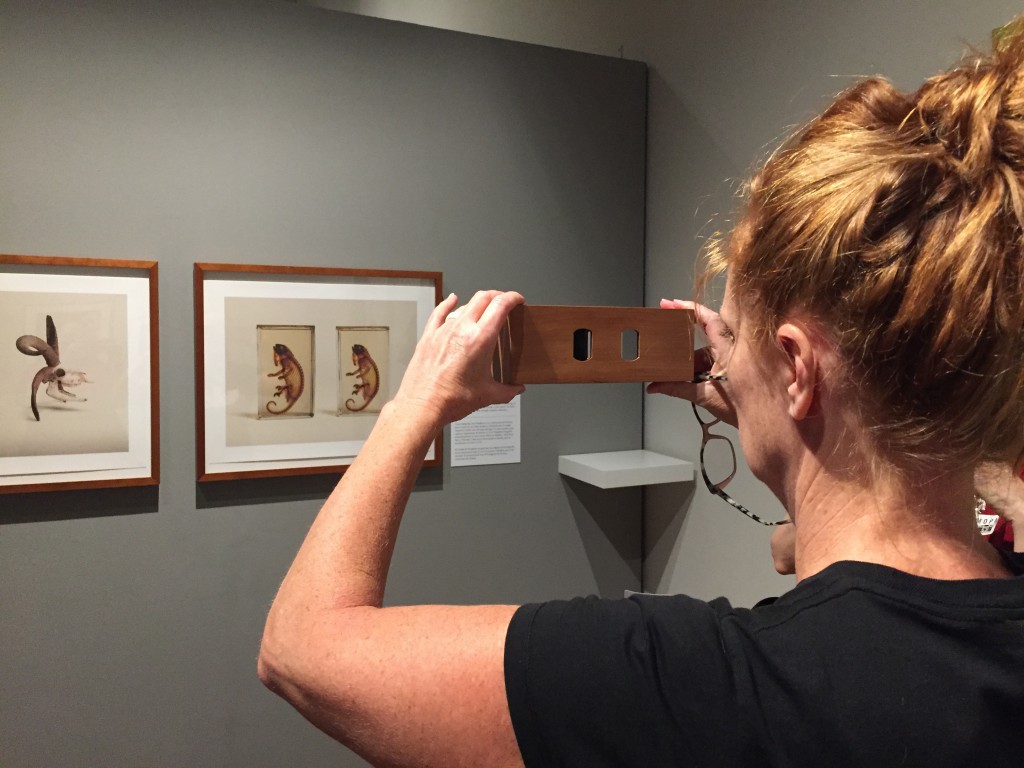 Perhaps my favorite piece was the bird in the cage. I didn’t manage to get a good shot of it (sorry), but I’m still going to share what I captured so you have an idea. This little video screen is perched inside a metal birdcage, and on the screen is a little yellow bird, looking back and forth and moving around on its perch. Somehow, seeing the video of the bird, instead of an actual bird, made the idea of its being imprisoned more palpable. I stood in front of this piece for a while. 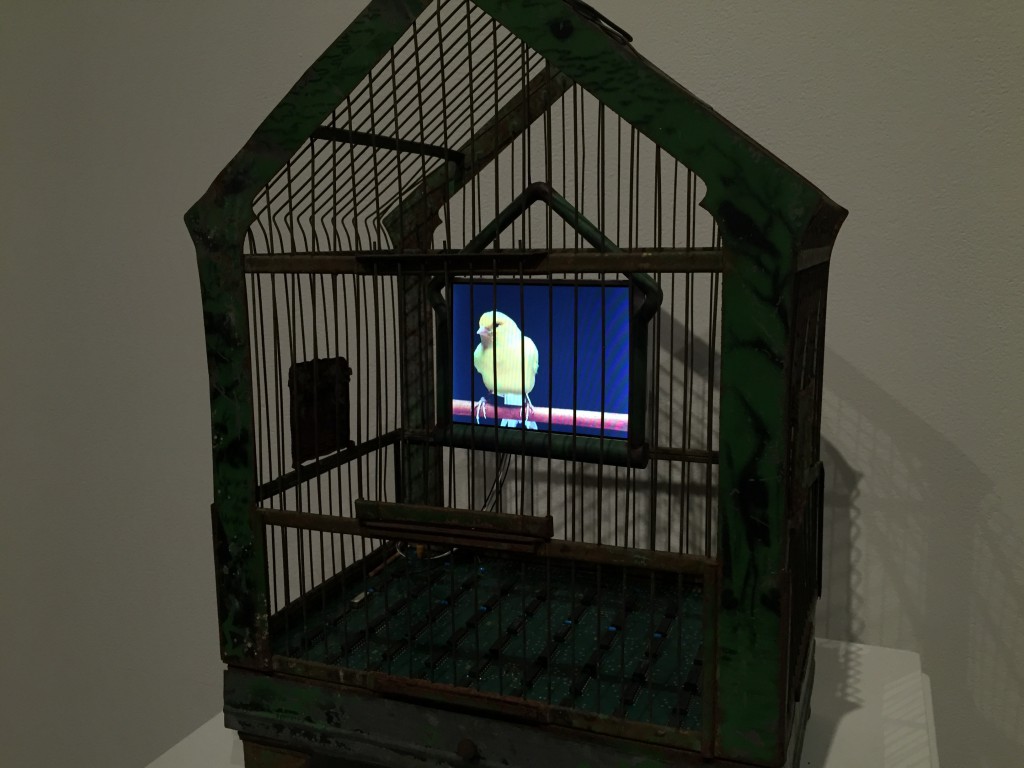 Multimedia piece, a bird in a cage… trapped in a screen

We had some fun with another interactive piece, though the placement of it was odd, we had to bend it down so you could see our heads. The idea, as we understood it, was to take our photo with the option of superimposing animals over our faces. But if the only thing that fits in the screen IS your face, it’s just a pic of an animal head. I think the original idea might have been to have a full-body shot with the animal head, but who can say. To make the most of it, we took one of just our faces, and another with the animal faces. WAIT! I just had an epiphany while skimming over this for typos. I can’t believe I didn’t realize it then: we were supposed to stand further back, against the wall, which was a few feet behind us. That’s why there was an option for “10 seconds” when we pressed the camera icon. Because that would have given us time to move back and pose. D’oh! 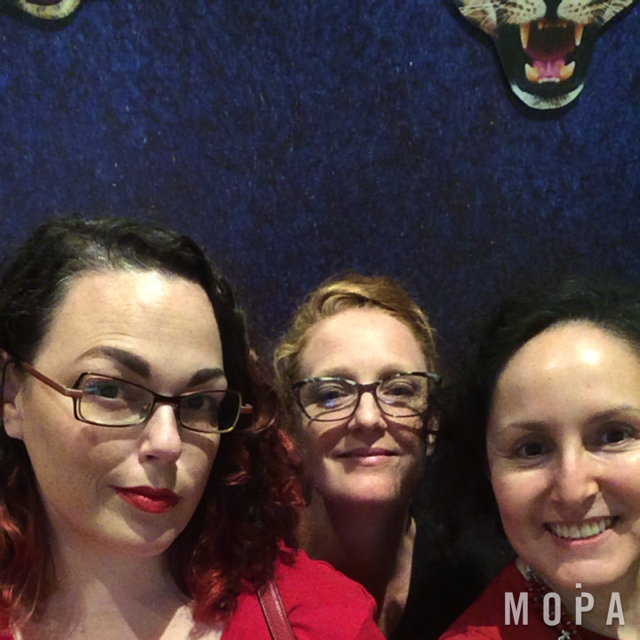 Barb, Kimberly, and Rosa in the “photo booth” 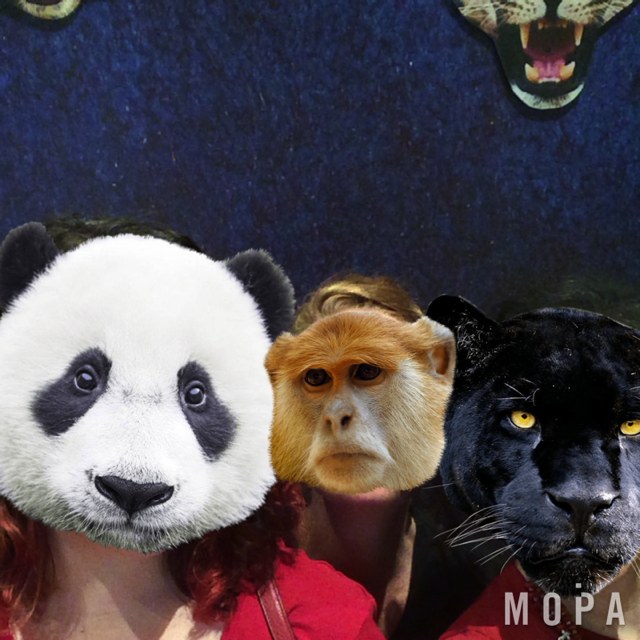 Now as Panda, Monkey, and Panther 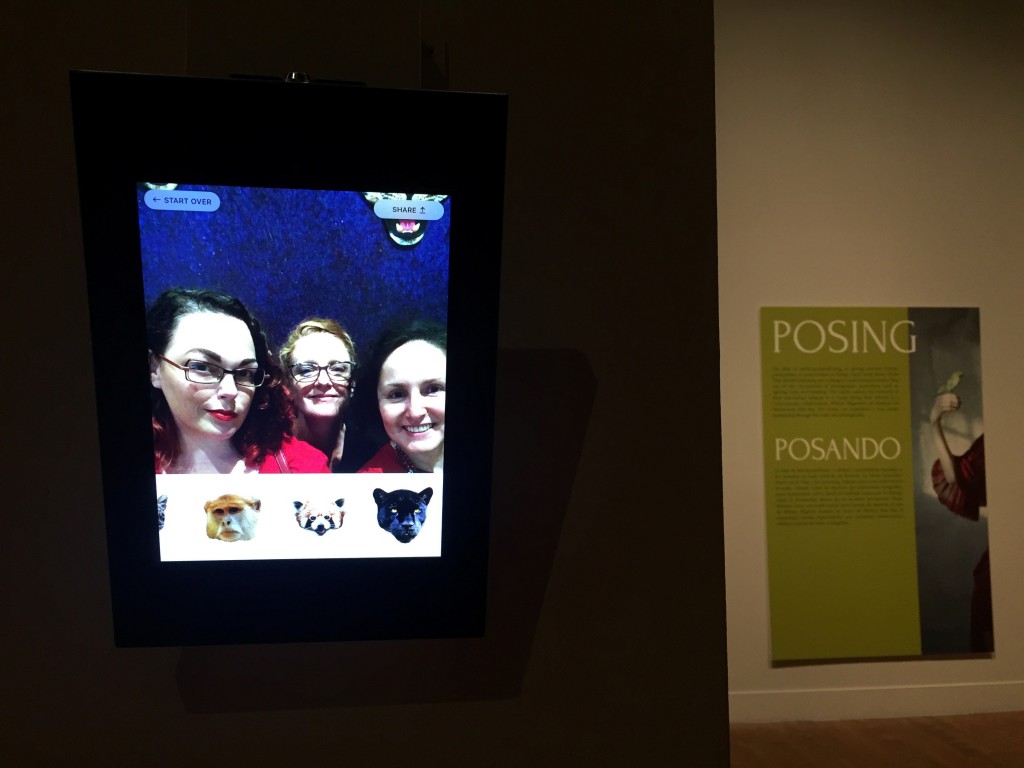 The picture-taking tablet, with an appropriate word in the distance

One super-fun aspect for me was seeing all the gallery names I recognized on the tags, as many of the pieces were on loan for the show. I went all know-it-all by giving histories of different ones, and artists I recognized, mostly because I was impressed with how much I’ve gleaned over the years through osmosis. But then Rosa bested me  by sharing information about certain artists I was amazed to learn (this one here is not a photo of a person, but a collage of features, and other insights). When we finished ogling the exhibit, we happened into a side gallery, and Rosa pointed out a bunch of cool interactive exhibits there, such as the moving reflection and actual 3D images we COULD see, at which we marveled. 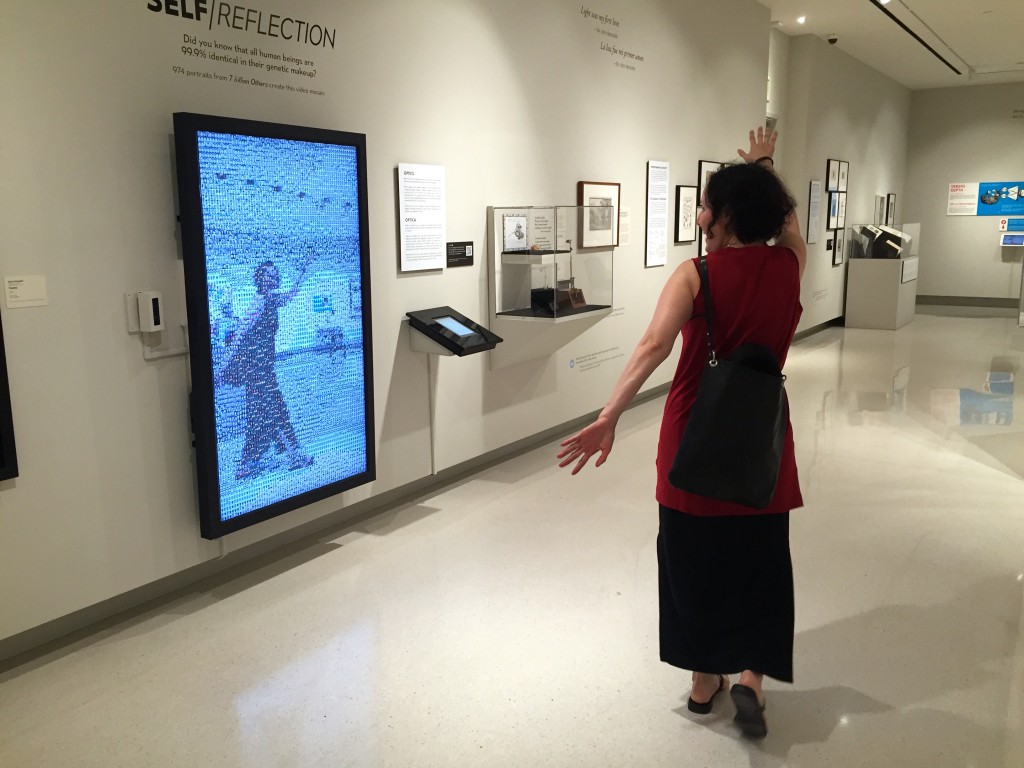 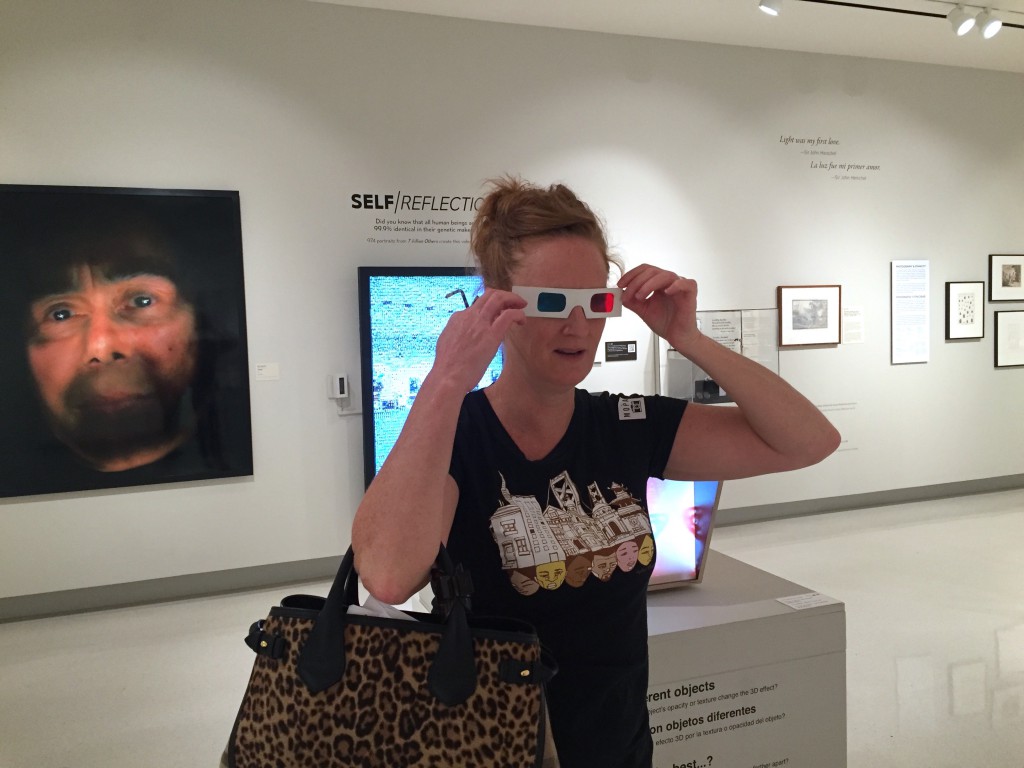 3D glasses that worked much better than those old wooden things

We especially enjoyed reading all these thought-provoking quotes throughout the space.

After the show, we ambled over to Panama 66, to relax in the shade by a small pool and take in the warm afternoon breeze. With cocktails, wine, and a bunch of food. Cuz that’s how we do. 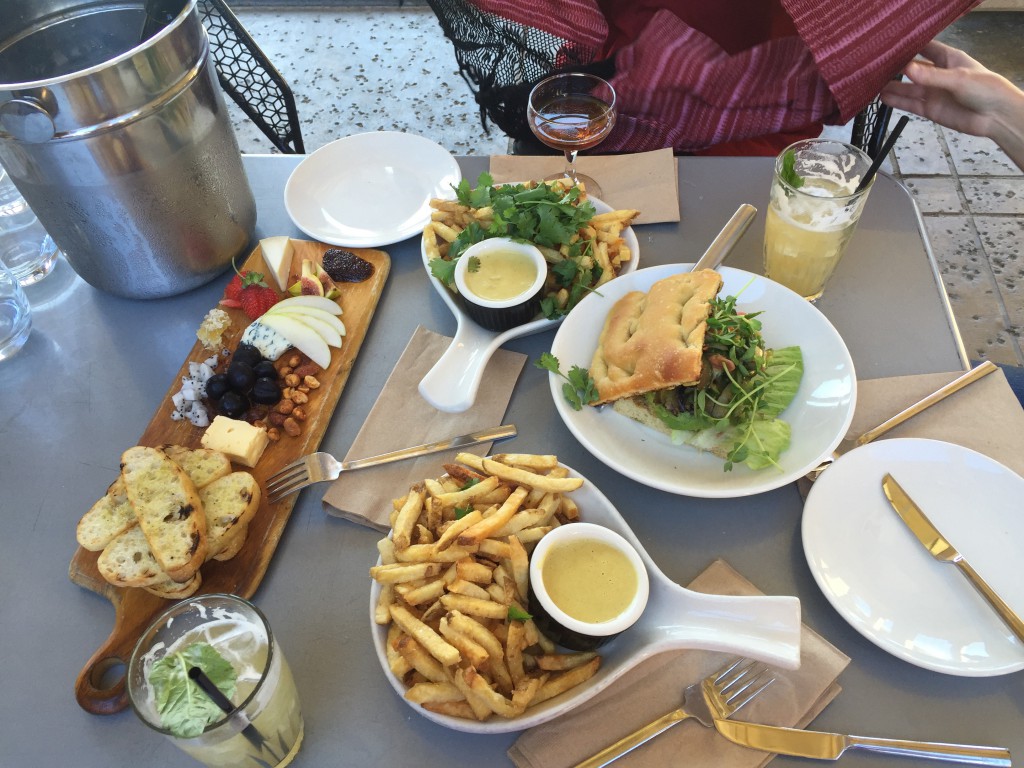 An excellent cheese board, avo sammich, & fantastic fries with curry dip at Panama 66 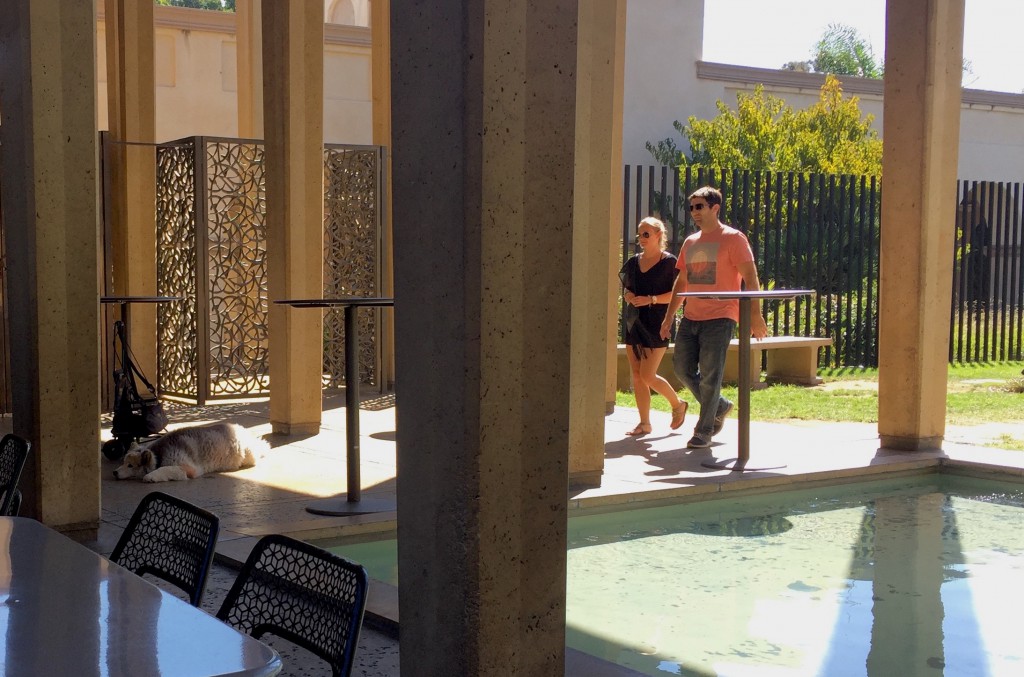 View from my seat, look at that fluffy pup!!!

When all was said and done (and sipped and nibbled), the consensus at the table was that we were all interested to see what the next show at MoPA might be.