Terri looked statuesque in a strapless gown made of glittery, sapphire-blue fabric. Katie was a pixie vixen in her black-and-silver-sequined tunic. One might have thought they were on their way to some fancy fundraiser gala rather than just over to my place for movie night. But then, this wasn’t your typical movie night.

“Look, Katie’s got a unicorn pendant that matches her unicorn earrings,” I said.

Terri was impressed. She pointed to the large shimmering opalescent disc hanging from a silver chain around her neck and said, “This is the closest thing I had to a magic crystal.”

With only a smattering of sparkly silver studs, my clothing was drab by comparison. But what I lacked in threads I made up for in refreshments. I presented my friends with a platter of vanilla-frosted cherry-chip cupcakes, bejeweled with glimmering granules of pink and purple sugar. But my enchanted pièce de résistance was the “unicorn cocktail,” a frisky pink libation composed of strawberry lemonade, vodka, Sprite, fresh raspberries, a slice of lemon, and my favorite ingredient — edible glitter in the shape of little silver stars and pink hearts. 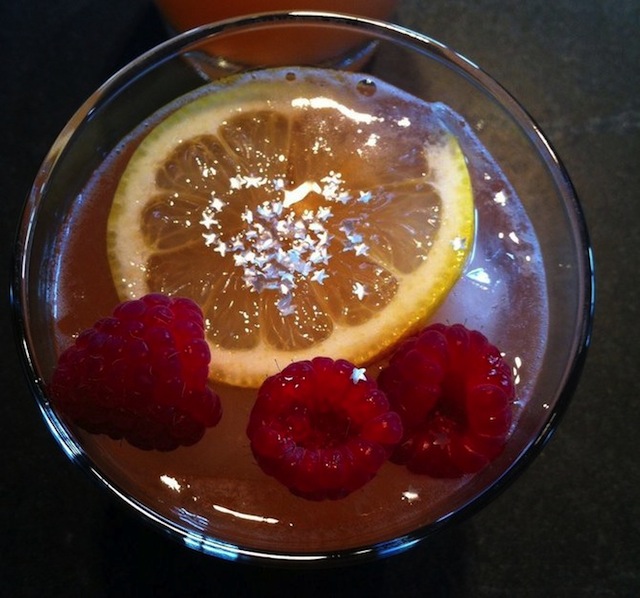 What began as a few friends wanting to watch a beloved childhood flick had blossomed into a wonderfully absurd unicorn-centric event. Katie couldn’t remember seeing Legend, and the only thing Terri remembered about The Last Unicorn was that it was dark, or at least darker than all the Disney flicks she’d enjoyed as a child. Both movies had long been seared into my brain.

Despite her hipster cred, Katie’s love for unicorns is not ironic. She’d not only seen the The Last Unicorn as many times as I had — she also read the book. Until she lent me her tattered copy, I didn’t know there was a book. And the unicorn jewelry she was flashing? She didn’t go out and buy that bling for the occasion — she’d fished it out of a drawer. She also owns the url unicornfancy.

Whereas Katie’s passion is directed toward the mythical creature itself, Terri and I are slightly more excited about the glitter and glamour associated with unicorns. Originally, the three of us were just going to get together and watch the movies. That was until — in a procrastinatory Google search — I discovered “unicorn poop cookies,” a shimmery rainbow confection. (It turns out they were the creation of local baker Kristy Therrien, whose whimsical recipe took second place in the San Diego Cake Club’s 2012 Confections for a Cause competition.)

Ovens and I don’t get along, so Katie agreed to bake the cookies if Terri, who is an artist, would be in charge of the decorating. But when the only night we were all available turned out to be a Friday (meaning everyone would be coming straight from work), we scrapped the cookies in favor of easy-bake cupcakes (that David, being the hyper-competent sidekick he is, baked and then let me decorate).

In the week leading up to the big night, we’d whipped ourselves into a rainbow-colored unicorn frenzy. I emailed Katie and Terri a cartoon drawing of three unicorns doing cocaine with the comment, “It’ll be a full-on unicorn party. Like in this picture, but instead of cocaine, we’ll be high on sugary cookies.” Terri answered with a painting of RoboCop riding a unicorn. In response, Katie wrote, “Oh. I didn’t realize this was a picture competition,” and blew our minds with her attachment: a unicorn in shiny metal armor with a rainbow-colored mane and tail charging from a burst of fire, with a Nyan Cat (a creature with a cat’s head, tail, and legs, but a Pop Tart for a body) leaving its rainbow trail as it flew over the spectacle. There was even a fairy with rainbow wings perched on a rock off to the side.

The day of Unicorn Night, I Googled “unicorn & wtf” and found the perfect photo to post on Facebook and set the mood for the evening — imagine the NASA mohawk guy as a scantily clad unicorn on a pink-and-purple backdrop — along with the message, “Are you ready?” Those who weren’t in the know questioned where and when this elusive event was taking place and whether or not it was open to the public. They probably thought it was some big bash being held at a club — not three chicks gathering to get their childhood-movie geek on.

When it comes to the movies we grew up watching (over and over on VHS tapes), even the bad is good. In Legend, it was Tim Curry’s terrible overacting, Tom Cruise’s overly dedicated interpretation of a wild woodland boy, Ridley Scott’s tedious close-ups on goblins and elves; this is what we notice and laugh at as grown-ups. But the little girls in us saw only the glitter on the unicorns’ horns, the bubbles and feathers floating through the air, the diaphanous wings on the fairy — things that delight us still.

We sipped our unicorn cocktails, heckled the groan-worthy bits, and reveled in the dazzling ones. After watching the director’s cut of Legend (there’s a good reason film editors cut what they do), we took a break to refill our beverages and then returned to the den for The Last Unicorn. “We should get the soundtrack,” Katie said in a brief pause between verses in the opening credits. “I mean, name one song by America that isn’t in this movie. Okay, there’s ‘A Horse with No Name,’ but it was probably meant to be about a unicorn.”

When the song reached its crescendo and we belted along, “Look and see her, how she sparkles — it’s the last unicorn! I’m alive, I’m alliiiiiiayaive,” a giddiness rose in my belly. Some dormant innocent, carefree core within me was momentarily awakened, and I was suddenly as happy and content as King Haggard gazing upon his sea of unicorns.

Katie and I were horrified when it became clear the Blu-ray version of the movie had been edited out the one part that had shocked and titillated us as children: when Molly Grue, upon first seeing the Last Unicorn, says, “Damn you, where have you been?” This was a major disappointment, but it was forgotten by the time we were singing along to the worst off-key duet in cinematic history, performed by Mia Farrow and Jeff Bridges.

When the Red Bull had been chased into the ocean and the unicorns were finally free, I switched off the TV. “That was fun,” said Terri. “I have an idea for the next double feature: Splash and The Little Mermaid!”

“Mermaid Night,” I said, my mind already reeling with possibilities for ocean-themed cocktails and under-the-sea inspired treats. “I can’t wait to see what you guys wear.”