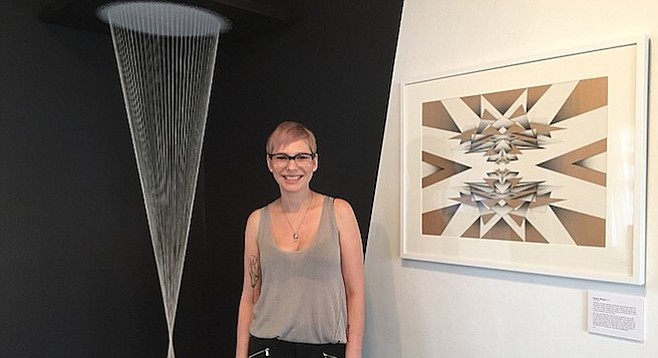 I wrote this story about my awesome friend, Melissa Walter.

There’s a an artistic universe squeezed into a little gallery space tucked between a residential home and a tattoo parlor on the eastern edge of North Park. The space is called Teros Gallery, the same name as Teros Magazine, published by gallery owner Alejandra Frank. Both the publication and the space are meant to be a “collaboration of creative minds and dexterous hands” with a focus on many intersections, including “music, folklore, self-transcendence, film, illustration, and science.” The name Teros is taken from Richard Shaver’s “A Warning to Future Man,” which was published in the sci-fi magazine, Amazing Stories, in the early 1940s. In Shaver’s post-apocalyptic tale, the Teros people are what’s left of a “noble” humanity, so they’re pretty much the good guys.

Frank’s latest collaboration is at that “edge” everyone’s been talking about for the past several years, the line between art and science. The current show is titled A New Stellar Order,with works by artist and NASA science illustrator Melissa Walter. After 20 years of imagining the actual universe and churning out literal visual interpretations of space that have been used in presentations by top scientists, including Stephen Hawking, Walter has taken to creating her own cosmos.

Upon entering Teros, I was greeted by strange noises — a woman’s voice speaking a language I didn’t understand, later a singing whale and other chattering animals, then a steamship horn. They were all sounds from the Voyager 1 Golden Record, curated by Carl Sagan and launched into the black ether in 1977 with the hope that, someday, it would be discovered and understood by extraterrestrial life forms, or even future humans.

Voyager 1, an interactive piece and abstract representation of the Golden Record.

The record provided an audio background for Walter’s interactive sculpture titled Voyager 1, which she made in collaboration with her musician husband, Travis Walter, and his brother, Brandon Walter. With the sticks provided, people can excite the various guitar strings transecting the top of Walter’s piece to make their own sounds to accompany the Golden Record.

Detail of “Black Hole with Accretion Disk and Jet.”

In one corner is an installation piece called “Black Hole with Accretion Disk and Jet.” Here, Walter uses twine, paint, and actual space to convey the concept of black holes, with a focus on the “large amount of mass concentrated in a relatively small space, resulting in a gravitational pull that is so strong that — within a certain distance — nothing can escape, not even light.” Walter explains, “The twine represents material, such as gas, that is lucky enough to escape the gravitational pull of the black hole, but in that escape, it’s jettisoned away from the black hole very quickly, and creates a jet that blows away from the black hole in a jet.”

With each interpretive piece, Walter provides real scientific education. Along with the description of this installation she writes, “Supermassive black holes with the mass of many millions of stars are thought to lie at the center of most large galaxies. In fact, there is a supermassive black hole at the center of our own galaxy, the Milky Way. It is called Sagittarius A*, and is about 26,000 light years from Earth.” Melissa Walter with two of her pieces in the current exhibit, A New Stellar Order.

Walter’s main works are her pen and ink drawings. They are made up of meticulously crafted lines and dots that create intricate patterns. As you gaze at each artistic interpretation, each otherworldly design, you are invited to consider the scientific inspiration for it. For example, with the piece “Galaxy Merger,” in which gold-accented geometric forms come to meet in the middle, we learn about stars forming as galaxies collide, and that “our very own Milky Way Galaxy is on a collision course with the Andromeda Galaxy.” But, the artist reassures, “that merger is not predicted to occur for another billion years.”

To further mix art and science, Teros Gallery is inviting astrophysicist and assistant professor at UCSD, Dr. Karin Sandstorm, to talk about the universe in the gallery on June 3 at 7 p.m., and answer any questions people may have about the stars. The exhibit continues through June 18 (gallery hours are Tuesday-Saturday, 1 p.m. to 6 p.m.).