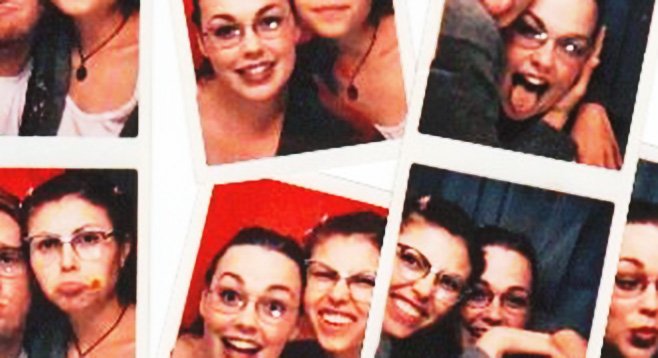 My ten-year high-school reunion was much like a paper cut: I wondered how it had come to be, I suffered through the discomfort, and, once it was over, I was quick to forget it.

David, at the time my boyfriend of about a year, had no interest in accompanying me, so I went solo. I remember eating salty buffet food in a cheap Mission Valley hotel ballroom and making small talk with women carrying around small photo albums filled with pictures of their progeny. At one point, I ran into a group of girls who were clearly doing cocaine in a bathroom stall. No judgment, just a palpable awareness that I hadn’t been invited to join them.

I remember feeling guilty upon running into an old friend with whom I’d lost touch, as though it were my fault. It probably was. We were animated when we talked; we hugged when we said goodbye; we exchanged phone numbers that we never dialed.

I left early, after the group photo but before the dancing. I declined an invitation to the gay rodeo event in the ballroom next door and went home to tell David he was right when he suggested I not go.

That night was ten years ago this month, which means that in a matter of days, my fellow Bonita Barons will assemble once again, this time to mark our 20th high school reunion.

David, who had been patiently waiting for me to stop asking and answering my own questions, took advantage of my momentary perspective-gathering pause to proffer his opinion. “There’s nothing keeping you from contacting any of those people if you wanted to,” he said.

Thanks to Facebook, I’m connected with more people from high school now than I ever was when we were actually in school together. It’s weirdly fascinating to see their children, who, in many ways, are more recognizable to me as my childhood friends than their parents now are. But though I know where these distant friends spend their family vacations, and though I occasionally like a Throwback Thursday photo or quippy update, I don’t feel compelled to make room in my non-virtual life for these ghostly remnants of my past.

David was right. If I really want to reconnect with someone, I don’t need to pay $95 to be in a room with that person and a few hundred other people who might look vaguely familiar. David says people only go to reunions for two reasons: to try to relive the best days of their lives or to brag. “Look at my kid, hear about my job, check out the new pool in my backyard.” Or by this point, “Look at my child’s achievements.”

My sister Jenny said it best, after I asked her why she didn’t go to her tenth reunion.

“I’m friends with all of the people I wanted to stay friends with,” she said. “Going to a reunion would be like seeing a stranger on the street and wanting to know what college they went to and how many kids they have. Sure, once upon a time I went to a class with you, but I only want to know about the people I want to know about. Everyone else, I couldn’t care less if she’s married, where she lives, how many kids she has. What would be the point?”

I’m not one of those people who “hated” high school. But I didn’t love it either. If it weren’t for my journal and my soap-opera-like documentation of petty plot points, I probably wouldn’t remember most of it.

He’s never joined in, but every year at Thanksgiving, David’s graduating class hosts a sort of reunion. Not the big-ticketed event that has, as I’ve recently learned, been outsourced to companies such as Reunion Specialists, but small casual gatherings. David acknowledges that this group has developed a special kind of friendship — like WWII veterans coming together to mark the anniversary of D-Day, or an annual Christmas-card exchange, this group looks forward to their a once-a-year get-together at a country club.

I came close to sending my bio for the reunion booklet. I even visited the page and looked over the form. I think the point of this booklet, one of which I purchased and sifted through at the ten-year mark, is to compare your achievements to those of your classmates. In the end, I didn’t feel the need.

I wonder if the desire to look back has something to do with watching your kids get older. If, upon seeing their little ones enter middle school, parents become nostalgic and begin to reminisce about their own innocent but tumultuous adolescence. Then their 20th reunion arrives, providing the perfect platform for this reminiscing.

One of my best friends in high school, who is now my Facebook friend, recently posted that she was driving through the desert and was reminded of a “really fun camping trip I went on long ago.” She tagged me, along with a few others, and asked who else had been there. Suddenly the memories returned; I recalled waking up at dawn so I could walk far, far away to pee in the wilderness without an audience. I could see in my mind’s eye the sun rising over the dusty horizon, and a hawk descending to swoop up a desert mouse. I smiled at the memory.

After commenting that I did indeed remember, and, yes, it had been a great time, she suggested we have a “camping reunion.” That was when I realized how much I’d changed. I hate camping. It’s dirty, with no running water, and there are bugs. Also, what would we talk about? They don’t know me, not anymore. I’d have to give my whole life story, as my life as I know it did not begin until after high school. I had no interest in getting to know someone I may or may not connect with in the most uncomfortable and trapped way possible.

But instead of saying all that, I simply responded, “Unless we’re camping in a five-star boutique hotel, I’m out.”