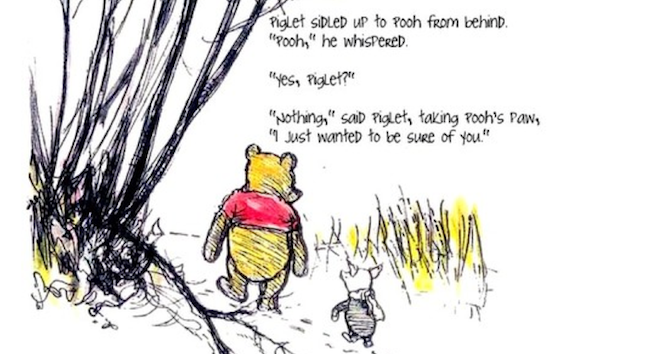 I stretched my arm out across the bed, but when my hand felt only fabric, a pang of panic gripped me. I cast about in the darkness, a sense of desperation rising in my chest, until my fingers finally found David’s bare shoulder. I sighed with relief and David said, “You okay?”

“I am now, beh-beh,” I said, giving his shoulder a little squeeze. I was reminded of a quote from my childhood, a page out of Winnie the Pooh: Piglet sidled up to Pooh from behind. “Pooh,” he whispered. “Yes, Piglet?” “Nothing,” said Piglet, taking Pooh’s paw. “I just wanted to be sure of you.”

David adjusted his position so that he could rest the palm of his hand against my forearm. As we lay like that, hands touching arms, I scooted closer to him still, and placed my cheek on his chest, my leg on his leg. The more of him I felt, the more concerned I was at the prospect of not feeling him, so I continued to press myself tighter against his body. The feel of his skin was a tether that held me to the moment, keeping me safe from being cast adrift into a tempest of brain waves.

I can recall a few incidents from my childhood that I now recognize in retrospect as fits of separation anxiety — once in elementary school and once more in eighth grade. Both times, I had just gotten out of the car as my mother was dropping me off at school when I was overcome with irrational fear. It was as though I’d walked away from the safety of an island and into an endless ocean, just to remember I couldn’t swim, and the only way to keep from drowning would be to crawl back onto the island. Or in reality, back into the car with my mother.

Mom could tell by the terror on my face that something was wrong. I was generally a good student, and I got anxious about missing assignments or being late to classes, so when I jumped back into the car and pleaded, “Please don’t make me go. Please, can I be with you today — please, please, please?” My mother didn’t try to argue me away, as she did with my younger sister, who was always trying to get out of going to school. Instead, Mom searched my eyes, nodded, and took me home, where she called the principal and reported me sick for the day.

As I lay there with David, feeling his skin beneath the blanket, with the reassuring pressure of his hand on my hip above the comforter, my fears faded away, and I experienced a sensation so rare to me that it took me a moment to identify it before I drifted off to sleep with a smile on my face: peace.

The following morning, I awoke with what I imagined was the same smile. I couldn’t remember the last time I’d slept so soundly. So, of course, the first thing I did — before David awoke and before I was vertical — was grab my phone from the nightstand to Google, “Why is human touch so soothing?”

I expected to find a bunch of stuff on the psychology and emotional benefits of human contact — it hadn’t occurred to me there’d also be a bunch of physiological health advantages. When someone touches you — in what’s called a “friendly touch,” because obviously this wouldn’t be the case if you were punched in the face — the pressure receptors in your skin send signals to your brain. More specifically, to the vagus nerve, which is in direct communication with your organs. Upon notification that you are not alone, the vagus tells your heart to slow, which decreases your blood pressure.

When skin touches skin, things happen with hormones: cortisol decreases and oxytocin increases. The first one is known as the “stress hormone,” and the second is dubbed the “cuddle hormone” or, more clinically, the “bonding hormone.” That explained the surge of emotion and attachment I felt for David when we were just lying there, holding each other. Lowered blood pressure, diminished stress, an overwhelming sense of peace…all brought about by something as simple as being touched by someone I loved. I may have been reading about the science of it all, but the more I learned, the more magical it seemed.

I know plenty about cortisol — its primary function is to pump you with “fight or flight” energy. To do this, it borrows energy from your immune system, which is why we are more susceptible to illness when we’re stressed out. My runaway cortisol is the reason I have a standing prescription for chill pills. It’s the stuff that pushes me to the edge, into panic attacks, wanting to fight or flee, not from a snarling tiger but from mundane, everyday things, like realizing I forgot to reply to an email.

David began to stir. I placed one hand on his chest and continued to hold my phone above my head with the other. When his eyes opened, I read aloud, “‘A soft touch on the forearm makes the orbital frontal cortex light up.’ That’s the same area that gets excited by things that smell really good or taste sweet. It says here that means touch — like chocolate, if you’re into chocolate — acts as a ‘rewarding stimuli.’”

David smiled a slightly confused smile and then turned on his side to face me. “It’s just…” I searched my mind for answers to the questioning look on my love’s face. “I needed to know why your touching me makes me feel so happy. But now, looking at you, I realize the why of it doesn’t even matter. It’s, like, I’ve been seeking cures for what ails me in the form of a pill or a drink, when all along, all I needed to do when I was feeling stressed was to be touched by you. You’re my medicine, beh-beh.”

David’s smile widened and he rested his hand on my leg. I put my phone down, grabbed David’s hand, and held it in mine.