Two Harbors to… you know 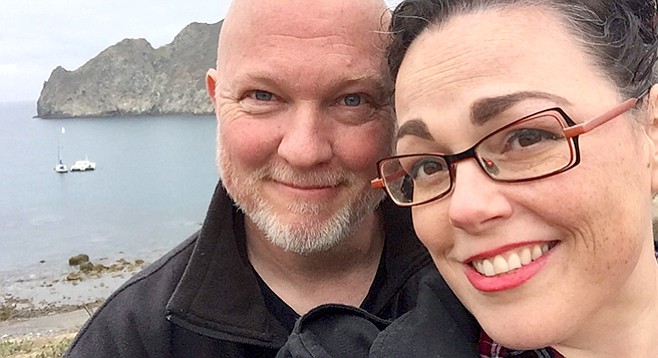 After surfing the bucking bronco of the boat’s bow with the delight of a kid on a rollercoaster, I finally took the seat beside David. I’d forgotten how fast the Catalina Express could go, or maybe it only seemed fast because of the turbulent water and the fact that this passenger yacht was a fraction of the size of the ship to which I’m more accustomed, the one that ferries me twice a year to Martha’s Vineyard, another island in another ocean a continent away.

Catalina and Martha’s Vineyard are about the same size, but the latter is three times more populated, as the majority of Catalina is protected by a conservancy and has remained undisturbed by development. In fact, this island off the Southern California coastline has only one town, Avalon, and one unincorporated village, Two Harbors. Unless you have your own speedboat or helicopter, transportation between Avalon and Two Harbors is so expensive and time-consuming as to be prohibitive.

Most people go to Avalon, where there are around 20 hotels and just as many restaurants, a variety of boat tours (my favorite is the glass-bottom boat), shops, spas, even a theater, botanic garden, and casino. But we were on our way to Two Harbors, where there is one restaurant, one general store, one 12-room lodge, and that’s pretty much it.

We’d visited Two Harbors once before, eight years ago. It was David’s discovery, after days of searching for a distraction-free (no internet, no television, no any-kind-of-anything) environment in which we could hole up and work on a writing project. This time, we had a creative mission of another kind — David, who was in the midst of prepping for his annual exhibition of new photographic art — wanted to capture a specific image of the night sky over the splendid and secluded Catalina Harbor, as seen from the hilltop on which our temporary home, the Banning House Lodge, is perched.

In the days leading up to our trip, David became obsessed with the weather app on his phone. Ten days out, the forecast called for partly cloudy skies. This was followed by the prognostication of a steady overcast, which morphed into a near-certainty of rain on both nights of our stay. At first, David was dejected, and I wasn’t much help. “If we were going to go for fun, I probably would have opted to stay on the fun side of the island,” I said.

But by the time we were packing to leave, David brightened. “Even if I don’t get my shot, we’ll have a nice little getaway,” he said. “I’ll bring the Scrabble and some nice wine, and we’ll have our books.” I realized that rather than leaving us bereft and bored, being “stuck” in a place with no entertainment options would foster rest and relaxation. As artists and freelancers who regularly trudge through seven-day workweeks, something akin to a “weekend away” sounded divine. And few places are as “away” as Two Harbors.

Upon our arrival, a big white van collected us, along with a handful of other guests. The lodge was only about a third of a mile away, but most of that distance is straight up the 15-story-tall hill. Our options to the top included the van and climbing the steep stone steps set into the side of the hill. With our luggage in tow, we chose the van. But after that, all of our trips down to the restaurant or store would involve a cardio-climb back to our room.

Shortly after checking in, we descended the stone steps and made our way to a bench that overlooks Isthmus Cove, where the boat had dropped us off. The water was calm. We watched as it gently lapped at the dense amalgamation of pebbles and shells that made up the shore. I breathed deeply, inhaling the fresh ocean air, and let it out with a satisfied sigh. David followed suit. With few people, and even fewer cars, the only sounds were the seagulls and the small waves that caressed the cove. “It’s so quiet,” I said. A cloudy Wednesday in April was apparently the best time to have this entire beach to ourselves.

A few minutes later, David squinted his eyes and held up his hands in front of him, framing a portion of the view, director-style. “Huh,” he said. “I may have just found another image to work on.”

“Not a wasted trip after all,” I said.

“It was never going to be wasted, remember?” He was right. All of our obligations were hours away by sea and by land; here, we could simply be.

I had suggested we check out the general store before dinner, to stock up on snacks to go with our wine, but we were 15 minutes too late. “How does a store close at 6 p.m.? The only store? What if people need something?” It occurred to me that all the campers on the other side of the hill must be excellent planners. After enjoying a Greek salad for dinner, I ordered a hummus and vegetable plate to go, an emergency stash to have in the room in case we got peckish later.

The next day, we waited until the morning rain subsided, and then went straight to the bench that overlooked the evenly spaced assemblage of buoys David had spotted, a white polka dot pattern on the dark slate-gray water. We stopped for lunch at the restaurant, and then, because David had yet another idea for a photo, we set off inland from the cove, along one of the three dirt roads, toward a point at the end of harbor #2 in the distance.

We were an hour out when it began to rain again, just a light drizzle. David took pictures of the scenery, and I took pictures of David. All the desert blooms were made more vivid against the backdrop of the dark lavender sky: the lemon yellows fluoresced, the purples and periwinkles popped. We reached the end of a cliff and gazed down upon turquoise water as clear as glass.

“I think a few of these might just turn out,” David said, looking down at his camera.

“That’s great if they do,” I said. “But we should probably come back here soon, so you can get the one you wanted, the one with the stars. And that way, we have a reason to come back here soon.” I tried to wipe the small raindrops from my glasses and then laughed at the futility. “How ’bout we skip the restaurant tonight and make our way back to the room for hummus, wine, and…you know.”

David flashed his dimples. “Yeah. We really should come here more often,” he said as he quickly packed up his camera.