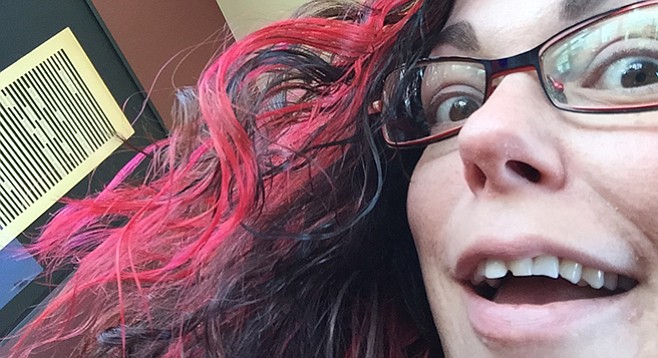 When the doorbell rang a second time, my mother’s terrified gaze met mine. We could hear the screams all the way from where we sat in the family room. As if in answer to my panicked expression, Mom leapt into action. Well, she didn’t actually “leap” — that would have been impossible in her condition. What she did was resume her lifelong role as the woman who called the shots, while I jumped up to carry out her orders. “First, close the kitchen light, it’s leaking into the dining room,” she said. “Now shut the door to the guestroom, because this light carries down the hall and can be seen through the guestroom window by the front door.”

“Huh,” I said as I went around flipping switches and pulling on doorknobs. “I forgot how you say ‘close’ the light instead of ‘turn off’ the light. I wonder if that’s a —”

“Shh, be quiet for a second,” Mom said. That’s when I noticed it had stopped: that terrible, guilt-inducing chant that had been tormenting us, all those tiny voices in unison shrieking, over and over, “Trick or treat!”

After a moment of silence, I said, “Are we bad people?” But before Mom could say anything, I answered, “No, we’re not. I mean, it’s not like I’m going to leave you in here all alone so I can hang out by the door for a few hours. Even if I did, I’m obviously super sick and snotting all over the place. What would I say? ‘Happy Halloween, kids, here’s some candy — oh, and don’t forget to take this fun-sized cold?”

My mother, who was fully recumbent in her new recliner, focused on my chafed red nostrils, then looked over to the pyramid of balled up tissues beside me, and shook her head. “Well, the upside to all this shit you’ve had going on today is that I’ve been so worried about you, I completely forgot about the fact that my knee was just ripped apart and put back together. I didn’t have a second to consider the pain — no ‘poor me’ around you!” We both started laughing, but my laughter turned into a coughing fit, which made us want to laugh even harder, because my coughing only corroborated Mom’s point.

As I attempted to take care of my mother, I was aware of the fact that I could barely take care of myself. The morning had been easy — I arrived with coffee and bagels, and we sat and talked over breakfast as though I’d just stopped by to hang out. But all the while, my sniffles steadily intensified. At one point I stopped going to the bathroom to blow my nose and just set a roll of toilet paper beside me on the couch.

As lunchtime approached, our predicament became clearer. If left to my own devices (meaning when David’s not around), I’ll forage for a frozen meal or a hard-boiled egg with cheese, basically whatever I can retrieve from the fridge and prepare in under five minutes. On the rare occasions when David is home and can’t make food happen, I take care of things for both of us by ordering from a delivery service, such as Eat24 or GrubHub. But when I hopped online to check out our lunch options, I learned that the modern food-delivery universe had yet to extend to the nether regions of suburbia. Instead of the usual international lineup of Greek, Thai, Vietnamese, Italian, and Mexican, the only thing that appeared on the screen when I entered my childhood address was a pizza joint.

“When Jane was here she made me pasta primavera,” Mom said.

“Yeah, that’s not gonna happen,” I responded. There was plenty of food in the house — so much so that I half-joked about how Mom’s place is where I’d want to be during the zombie apocalypse. We could survive for years on all those soups, canned fruit, bags of pasta, jars of tomato sauce, and boxes with pictures of balanced meals on the front, along with the words, “Just add water and heat.” I was beginning to see where I got my cooking chops.

“Look, I don’t know how to kitchen, and I have a conference call in about an hour,” I said. “I can make you soup — and by ‘make,’ I mean ‘microwave’ — or I can heat you up these leftovers of that dish Jane made you.” I sneezed and blew my increasingly sensitive nose. It took me a few seconds to realize I must have missed the tissue, because my right breast was suddenly soaked, right through my shirt and bra, with a flood of watery snot. I grabbed a paper towel and wiped frantically at my boob while Mom stared on in what can only be described as amused horror.

I skulked back into the family room and plopped down on the couch. “It’s amazing that you have enough meds here to operate your own clinic, and yet not one pill in that cabinet helps with cold symptoms,” I said. I held my hands on either side of my head like a vise, hoping the pressure would alleviate my sinus pain. And that’s when it happened. I have a habit of unconsciously tapping my teeth together, a nervous tic I developed as a kid shortly after the first time I fell on my face and lost my two front teeth. I knew the moment I heard the subtle crunch that the bonding on my front tooth had given way, again. I spit the section of tooth into my hand and smiled up at Mom so she could see the new gap.

Mom looked like she didn’t know whether to laugh or cry. In the end, we both chose laughter: chuckles turned into cackling that crescendoed into hysterics and finally tapered into faint giggles.

“Could you do me a favor and put those snot rags in a plastic bag?” Mom asked.

Yes, of course.” When I’d finished consolidating tissues, I said, “I’m sorry I’m so bad at this. I really thought I could help. But you have to admit, like you said, at least I distracted you from the pain from your knee surgery.”

“You didn’t plan it that way, but you were pleasantly distracting,” Mom agreed. “Like I said, I didn’t have a moment to think of myself; you put me in full Mom mode. I would definitely say, at least compared to your sisters, you’re more of a companion and entertainer than a caregiver.”

She was right, of course. I flashed Mom a big, snaggletoothed smile and we broke into fresh waves of laughter. If laughter truly is the best medicine, then perhaps I am not such a bad caregiver after all.