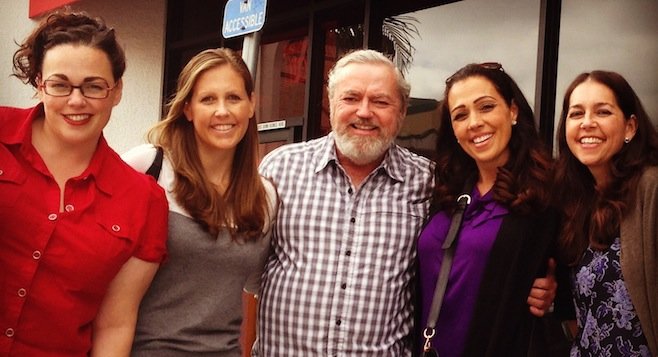 Jenny, my wittiest sister, recently discovered a new app for her iPhone that has made group-texting with my sisters far more interesting. Though Heather and I benefit from the potentially endless supply of hilarity, the app has damned our ditziest sister, Jane, who has become the de facto target of Jenny’s japes.

The group text is usually reserved for sharing and commenting on cute pics of my sisters’ kids. But every once in a while, we use it to make plans, as we did recently to figure out who was available at what time to meet up with Dad on Father’s Day. Of the four of us “Johnson girls,” I’m the only one who doesn’t have children, so on Hallmark holidays such as Mother’s Day and Father’s Day, I do my best to work around my sisters’ schedules, as they not only have parents to celebrate, they also are parents to be celebrated.

Jane initiated the digital dialogue by stating that she’d rather do breakfast, then church, instead of church, then lunch, because she needed to get to Jamul by the afternoon (to honor her husband, Simon, and his father at another family gathering). Jenny said that worked great for her, and Heather and I were flexible, so we all agreed on an early breakfast. Our messages were lively and affable — we playfully one-upped each other with variations of the word “biatch” and mentioned how much we were looking forward to spending time together.

I steered us back to the plans by suggesting that it was obviously Jane’s responsibility to make reservations for us somewhere because, after all, it was she who had recently broken Dad’s sink.

“Yeah, I broke it, jealous?” Jane texted. I could envision her mischievous grin as she then tapped, “You’re a producer now, you take care of it,” to which I responded with a simple image of Wonder Woman holding up an index finger, overlayed with text in clear white letters that read, “Aw Hell no.”

Jenny followed that up with some random awkward schoolboy’s photo that she’d captioned, “Bitches be crazy.”

I could sense Jane’s bafflement ten miles away. “Where are you getting those?” Appended to her question was a basic, circa 2006 animated emoticon of a yellow cartoon guy pulling down his pants to shake his naked cartoon ass at us.

“We’ve busted beyond emoticons and have gone to the web,” I answered. “Cool thing, the internet. They have all kinds of stuff.”

Then Jenny won the day by sending the “Sassy Black Woman” meme with the text, “Jane always be breakin’ shit.”

Heather had been mostly silent throughout all this, but, ever the school teacher, she awarded Jenny’s text a gold star by declaring, “That’s my favorite.”

On Father’s Day, we all gathered at Bread & Cie because apparently no early breakfast spots in San Diego take reservations. It was there, still laughing from the text convo the day before, that Jenny showed Dad the meme she created to commemorate Jane’s latest snafu. In a petulant tone not fit for the woman who was the eldest among us, Jane demanded Jenny share the app with her so she could play at our level. 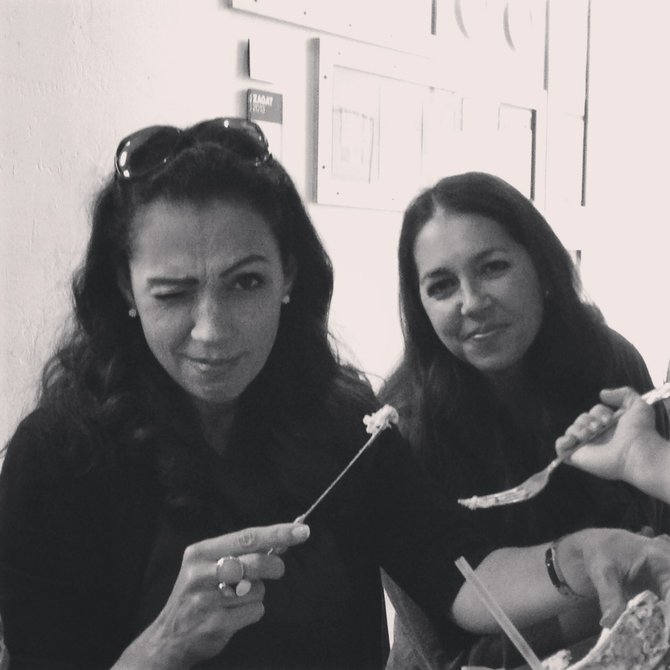 After a few moments fiddling with her phone, Jane said, “I found one called Easy me-me, is that it?” At this, Heather, Jenny, and I burst into laughter. “What?” Jane was mystified. “Is it just ‘me,’ or the ‘me, me’ one? I don’t get it. Stop laughing, and tell me.”

Heather kept repeating, “Me! Me!” between giggling patters.

We really lost it when Dad said to Jane, in an authoritative tone, “Honey, they’re laughing because you said it wrong. It’s pronounced mehm.”

“I seriously feel like someone slipped a hallucinogen into my coffee,” I said. “Is this really happening?” Each time I caught Heather or Jenny’s eyes, it only made me laugh harder. Dad and Jane both looked lost and were beginning to look irritated, so once I caught my breath, I said, “It’s pronounced meeeeeem. Get it? Meeeeeeem. Not me me, not mehm, just meem. How do you guys not know this?”

“Wait,” Dad said, now looking at me as though seeing me for the first time that morning. “Are you the toxic fairy?”

Dad’s surreal non sequitur pushed us over the edge of laughter and into hysterics. “That’s such an awesome question, on so many levels,” Heather said, wiping tears of mirth from the corners of her eyes.

“Are you?” Dad persisted. “The toxic fairy?” His face had the wary look of someone who suspected he was being messed with and wasn’t very happy about it.

“I have no idea what you’re talking about,” I said. “But it’s really, really funny. What, is someone sending you memes anonymously and calling themselves the ‘toxic fairy?’ And you think it’s me?”

“No, it’s not me,” I said, starting to wonder if I was the one being messed with. If so, it was a genius mindfuck because I was so confused I was beginning to question reality, just like that time on mushrooms when I forgot how to speak and every time someone spoke in my direction, I raised my brows in amazement and said, “Bzzzz.”

While I was still trying to grasp the whole “toxic fairy” thing, Dad, smiling, leaned in closer to Jenny and me and said, “I love this, all my daughters. I love that you’re all so funny.” Then, with an impish smirk that matched Jane’s usual trouble-making face, he added, “Even Heather, in a Mr. Bean sort of way.”

Jenny and I shared a hilariously disoriented look and then laughed so hard and loud that heads at the other end of the room began to turn in our direction. Tapering to a steady giggle, we looked up to find Jane and Heather waiting quietly for us to fill them in. “What did he say?” We just kept chuckling, but Heather — as much of a bulldog as any of us when we’re being kept from something we want — wasn’t about to let it go. “What? What did he say? Dad, what did you say?”

“Don’t tell her,” Dad said, giggling along, though his chuckles had a guilty ring to them.

“It doesn’t even make sense,” I said in answer to Heather. Then, in a hushed aside only Jenny could hear, I said, “If anyone’s going to be Mr. Bean, it’s Jane.”

Jenny agreed. I made a mental note to find a photo of Mr. Bean and send it in the next group text — as much to amuse Jenny as to confuse Heather and Jane, who hadn’t heard Dad’s nonsensical comment and would therefore entertain us as they tried to figure out just what it was about Mr. Bean that we found so damn funny.